An experiment has revealed how spit droplets from talking can spray through the air potentially transmitting viruses such as Covid-19, unless the speaker wears a mask.

With studies suggesting that talking can release just as many virus harbouring droplets into the air as coughing and sneezing, scientists have devised a way to visualise the threat posed by an overly chatty neighbour.

By creating a ‘light sheet’ from green lasers within a box researchers were able to illuminate the droplets of spit as they left the speaker’s mouth – who was speaking directly into the box.

A video of the experiment, carried out at the National Institutes of Health in Bethesda, Maryland, U.S., shows a high number of oral droplets spraying from the speaker’s mouth as they repeatedly say ‘stay healthy’ – brighter flashes indicate larger droplets.

A brightly illuminated smattering of aerosol droplets, also known as spit, are released from the speaker’s mouth as he says ‘stay healthy’ at a loud volume

As the speaker increases the volume of his speech the amount of spit sprayed, or droplets produced, also increases.

The test is then carried out again with the speaker wearing a mask over their mouth.

This time no oral droplets of spit are seen illuminated by the light sheet, suggesting that the risk of infection to anybody nearby would be much reduced.

Smaller aerosol droplets, like those produced when talking, can dehydrate and form droplet nuclei, remaining airborne longer than the larger droplets produced while coughing, which quickly fall to the ground. 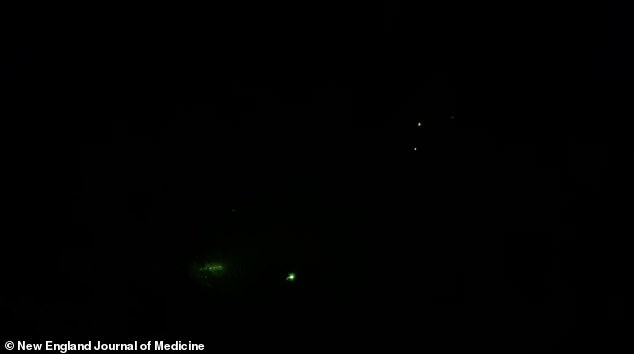 This extends the potential for the droplets to reach another individual, causing infection if they harbour virus particles.

Authors of the study concluded: ‘Repetition of the same phrase three times, with short pauses in between the phrases, produced a similar pattern of generated particles, with peak numbers of flashes as high as 347 with the loudest speech and as low as 227 when the loudness was slightly decreased over the three trials,

‘When the same phrase was uttered three times through a slightly damp washcloth over the speaker’s mouth, the flash count remained close to the background level (mean, 0.1 flashes); this showed a decrease in the number of forward-moving droplets.’ 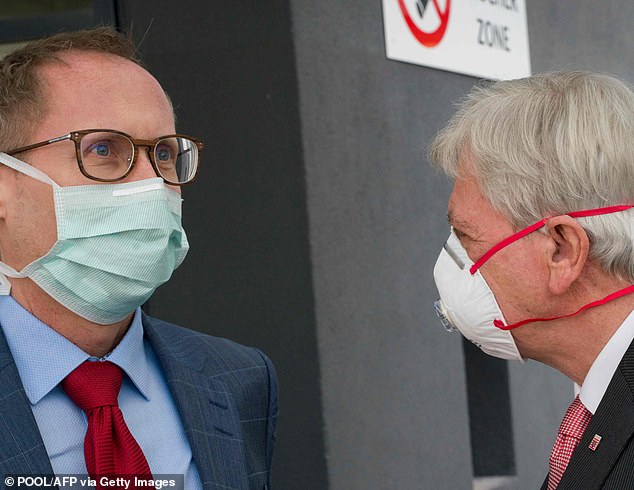 German officials talk in close proximity while wearing face masks during a visit at the university clinics Giessen and Marburg in Giessen, western Germany, on April 14, 2020

Dr. Harvey Fineberg, who chairs the Standing Committee on Emerging Infectious Diseases told ABC: ‘Even just quieter talking or breathing can generate tinier aerosol droplets – all of these are capable of carrying a virus.

‘What we do not know is exactly what proportion of the virus rides out and infects others from what size droplets. All are capable.’

While it is widely known that covid-19 is highly infectious and can be transmitted from person-to-person when in close proximity the usefulness of face masks has been disputed. 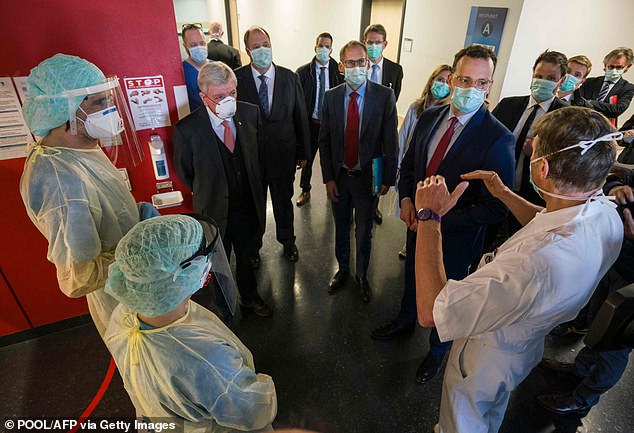 German government officials wear face masks as they talk in front of an intensive care unit during their visit at university clinics Giessen and Marburg in western Germany, April 14, 2020

The World Health Organisation advises against the wearing of masks for general use stating ‘If you are healthy, you only need to wear a mask if you are taking care of a person with COVID-19’.

In stark contrast the US Centers for Disease Control and Prevention (CDC), urges all Americans to wear masks for their own protection.

The CDC has even went one step further and advised people use makeshift masks out of scarves when travelling on public transport or in supermarkets.

UK Health Secretary Matt Hancock insists that ‘well’ Britons do not need to wear masks because evidence on them being useless had been ‘very clear from the start’. 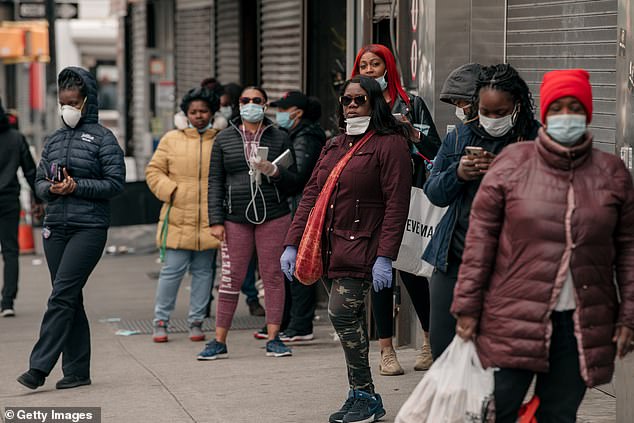 The US Centers for Disease Control and Prevention (CDC), urges all Americans to wear masks for their own protection. Pictured: Pedestrians in Brooklyn, New York

However Britain’s chief scientific adviser, Sir Patrick Vallance, said on Monday that there is an ‘ongoing review’ of official advice on masks.

For weeks the Government has told people not to bother with them and to make sure there are enough available for staff in hospitals and care homes who really need them.

Scientists are split on the effectiveness of masks, with some claiming they could prevent asymptotic patients from spreading the disease before they know they’re ill.

Others say surgical face masks – the most popular kind – are too thin, loose-fitting and porous, which make it easy for the tiny viral particles to pass through.

The study, published in The New England Journal of Medicine, was carried out by Dr Philip Anfinrud, Dr Valentyn Stadnytskyi, and Dr Adriaan Bax at the National Institutes of Health, Bethesda, Maryland and  Christina E. Bax, at the University of Pennsylvania, Philadelphia.

THE TRUTH ABOUT FACE MASKS: WHAT STUDIES HAVE SHOWN

Research on how well various types of masks and face coverings varies but, recently, and in light of the pandemic of COVID-19, experts are increasingly leaning toward the notion that something is better than nothing.

A University of Oxford study published on March 30 concluded that surgical masks are just as effective at preventing respiratory infections as N95 masks for doctors, nurses and other health care workers.

It’s too early for their to be reliable data on how well they prevent infection with COVID-19, but the study found the thinner, cheaper masks do work in flu outbreaks.

The difference between surgical or face masks and N95 masks lies in the size of particles that can – and more importantly, can’t – get though the materials. 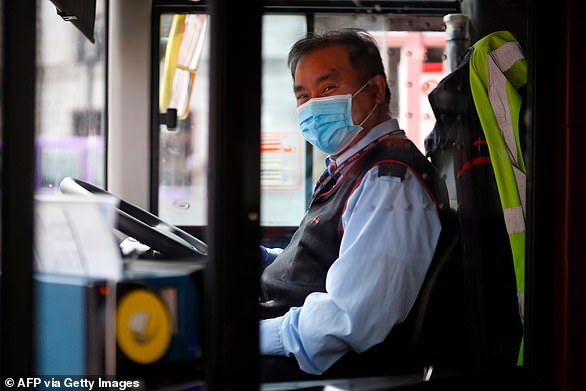 A bus driver wears a face mask as he sits in the driver’s seat on a bus at Victoria Station, central London on April 17, 2020

N95 respirators are made of thick, tightly woven and molded material that fits tightly over the face and can stop 95 percent of all airborne particles, while surgical masks are thinner, fit more loosely, and more porous.

This makes surgical masks much more comfortable to breathe and work in, but less effective at stopping small particles from entering your mouth and nose.

Droplets of saliva and mucous from coughs and sneezes are very small, and viral particles themselves are particularly tiny – in fact, they’re about 20-times smaller than bacteria. 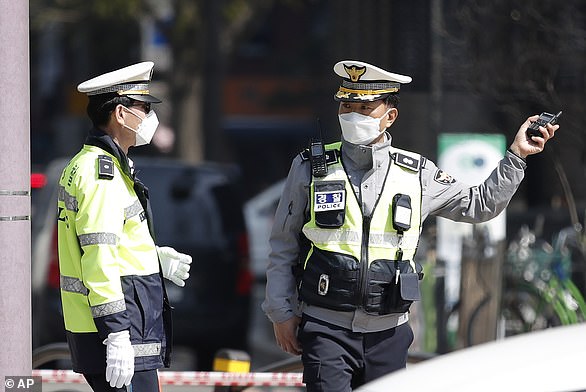 Police officers wearing a face masks to protect against the spread of coronavirus, talk to each other on the street in Seoul, South Korea, Tuesday, April 14, 2020

For this reason, a JAMA study published this month still contended that people without symptoms should not wear surgical masks, because there is not proof the gear will protect them from infection – although they may keep people who are coughing and sneezing from infecting others.

But the Oxford analysis of past studies- which has not yet been peer reviewed – found that surgical masks were worth wearing and didn’t provide statistically less protection than N95 for health care workers around flu patients.

However, any face mask is only as good as other health and hygiene practices. Experts universally agree that there’s simply no replacement for thorough, frequent hand-washing for preventing disease transmission.

Some think the masks may also help to ‘train’ people not to touch their faces, while others argue that the unfamiliar garment will just make people do it more, actually raising infection risks.

If the CDC does instruct Americans to wear masks, it could create a second issue: Hospitals already face shortages of masks and other PPE.