Expensive parking fail! Porsche hits SUV in driveway then careers over wall and lands on another car

A Porsche driver had a very expensive parking fail when they accidentally slammed on the accelerator and went speeding over a wall on top of another car.

The motorist, at the wheel of what is believed to be a powerful electric Porsche Taycan, hit an SUV parked in a driveway and then careered over a wall and landed on another car in the street.

CCTV footage from another house captured the driving disaster that happened on a quiet cul-de-sac in Manningtree, Essex, yesterday afternoon.

CCTV footage captured the moment of a driver of a Porsche Taycan suffered a parking fail. The super car is slowly making its way up a steep driveway

In the clip the Porsche is seen slowly making its way up a sloped driveway.

It stops on the hill as though about to park then unexpectedly swerves to the right.

The Porsche speeds into an SUV parked in front of a garage and sends it spinning towards the house.

The supercar then continues on its path of destruction, and careers over a wall.

It lands on top of a parked car below, sending it skidding down the road. The Porsche finally comes to a stop balanced precariously between the wall and the blue car. 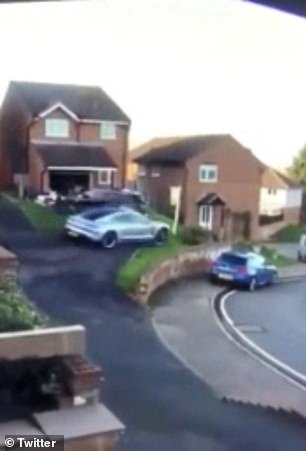 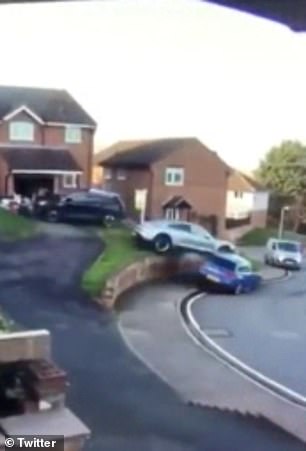 The video was posted online yesterday, and received almost 7,000 views.

Viewers speculated that the driver had hit the wrong pedal and accelerated rather than braked.

The Porsche Taycan is amongst the fastest electric cars on the market, with prices starting at £83,000 and rising to £139,000 for the Turbo S model.

The electric super car can also drive up to 253 miles on low-cost electric power and costs only £7.92 for a full charge.