Researchers at Harvard University have developed a robotic exosuit that swiftly calibrate to an individual wearer in a matter of seconds.

The system uses ultrasound to measure a user’s muscle dynamics and then develops an activity-specific profile, whether they’re strolling in the park, stopped at a crosswalk, or running up a hill.

Engineers have long worked on exosuits that help people with disabilities walk, but the obstacle has always been developing a frame that can adapt to how humans often change pace and encounter new terrain.

How people walk is influenced by a multitude of factors, including height, gender, age, and muscle strength, and can be influenced by disabilities like Parkinson’s Disease or a stroke.

That’s a major challenge for wearable robotics to augment walking in the real world, instead of just a laboratory treadmill, the scientists say.

‘To date, customizing wearable robotic assistance to an individual’s walking requires hours of manual or automatic tuning,’ according to the release.  ‘[It’s] a tedious task for healthy individuals and often impossible for older adults or clinical patients.’

Partnering with the Harvard Biodesign Lab and Howe’s Harvard Biorobotics Laboratory, which has experience with ultrasound imaging, researchers at Harvard’s John A. Paulson School of Engineering and Applied Sciences (SEAS) looked ‘under the skin,’ lead author Richard Nuckols said in the release. 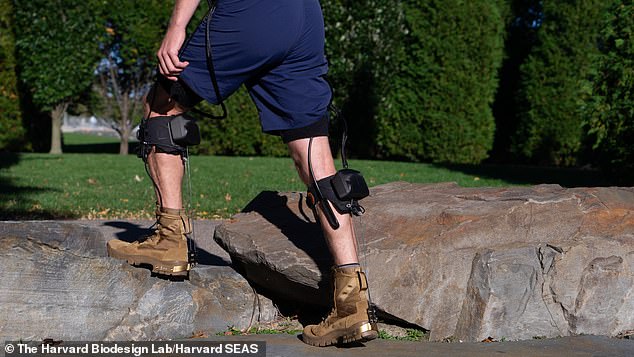 ‘Our muscles and tendons have compliance,’ Nuckols said, ‘which means there is not necessarily a direct mapping between the movement of the limbs and that of the underlying muscles driving their motion.’

The exosuit straps around a user’s calves, with wires leading up to a battery pack worn around the waste.

A miniature ultrasound system images the wearer’s calve muscles and estimates how much additional force is needed to counter the demand from any number of walking tasks. 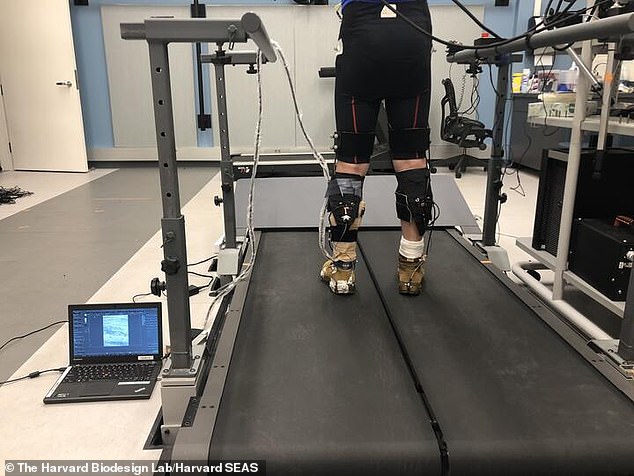 The system only needs a few seconds of walking—even just one stride, in some cases—to profile the wearer and their situation.

When tested in real-world situations, the exosuit was able to quickly adapt to changes in walking speed and incline, the researchers said.

Its muscle-based assistance reduced the metabolic demand on the wearer by an average of 15.9 percent for walking on a level surface at a pace of about three mph and 8.9 percent when moving at about four mph. 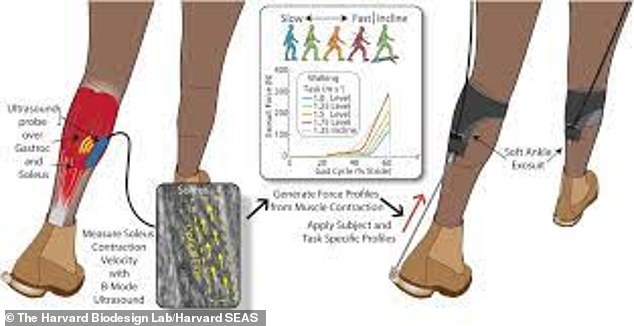 ‘Our muscles and tendons have compliance, which means there is not necessarily a direct mapping between the movement of the limbs and that of the underlying muscles driving their motion,’ said robotics expert Richard Nuckols 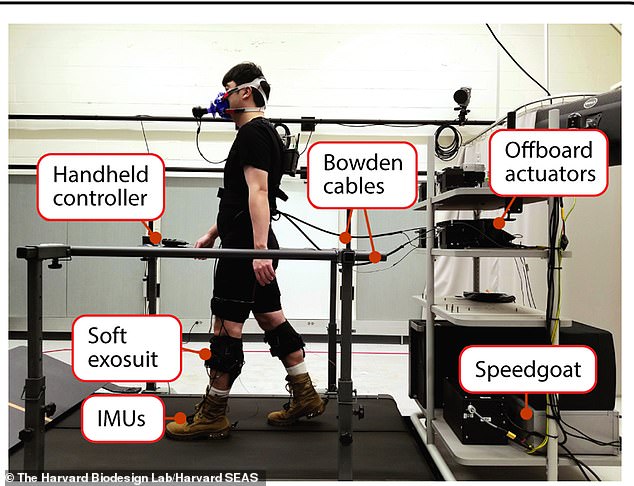 For someone going three miles per hour on an incline of 5.71 degrees, it still provided a 7.8 percent reduction in metabolic demand, which is measured by analyzing oxygen consumption and carbon dioxide production.

‘By measuring the muscle directly, we can work more intuitively with the person using the exosuit,’ said co-author Sangjun Lee, a SEAS graduate student.

‘The exosuit isn’t overpowering the wearer, it’s working cooperatively with them.’ 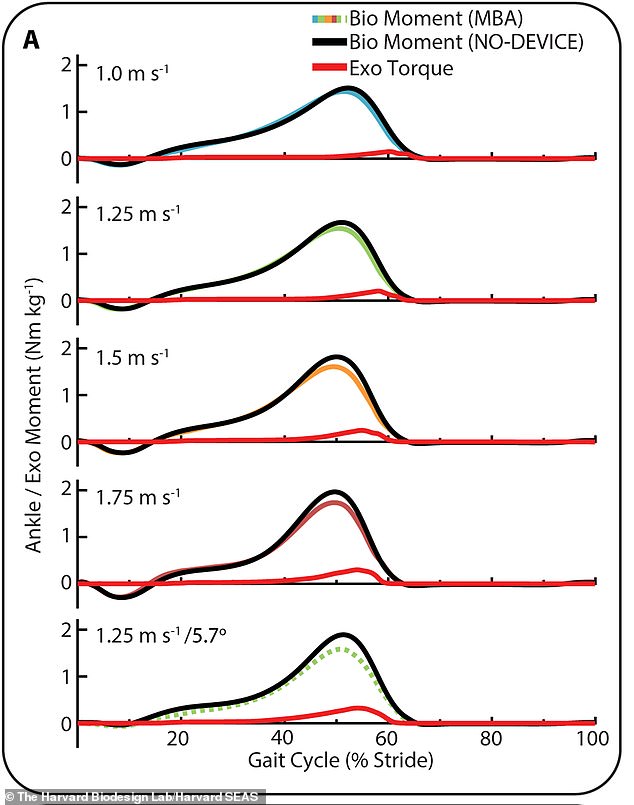 The device reduced metabolic demand by an average of 15.9 percent on a level surface at a pace of about three mph and 8.9 percent at about four mph. For someone going three mph on an incline of 5.71 degrees, it still provided a 7.8 percent reduction

The researchers hope to improve the system’s calibration to allow for even faster real-time adjustments.

WHAT IS AN EXOSKELETON?

Exoskeletons are wearable devices that work in tandem with the user.

Exoskeletons are placed on the user’s body and act as amplifiers that augment, reinforce or restore human performance.

The opposite would be a mechanical prosthetic, such as a robotic arm or leg that replaces the original body part.

Exoskeletons can be made out of rigid materials such as metal or carbon fibre, or they can be made entirely out of soft and elastic parts.

Exoskeletons can be powered and equipped with sensors and actuators, or they can be entirely passive.

Exoskeletons can be mobile or fixed/suspended and can cover the entire body, just the upper or lower extremities, or even a specific body segment such as the ankle or the hip.

‘In the field of wearable robotics, there is a clear need for customizing assistance to the user and task,’ they wrote in a paper published in the journal Science Robotics.

If perfected, the frame could be worn by soldiers, firefighters or rescue workers to lighten their load.

It could also improve mobility and quality of life for seniors and disabled people.

In 2017, a different team published another Science Robotics paper on a tethered soft exosuit that can reduce the metabolic cost of running on a treadmill by more than 5 percent.

Using thin, flexible wires, the high-tech ‘running shorts’ are designed to apply force to the hip joint, which ultimately assists the muscles during each stride.

‘Homo sapiens has evolved to become very good at distance running,’ co-author Philippe Malcolm, a biomechanics expert at the University of Nebraska, said in a statement. ‘But our results show that further improvements to this already extremely efficient system are possible.’

The shorts incorporate flexible wires anchored to the back of the thigh and waist belt, which are then linked to an external actuation unit.

As the wearer runs, the actuation unit pulls on the wires, which act as a second pair of hip extensors applying force to the legs with each stride. 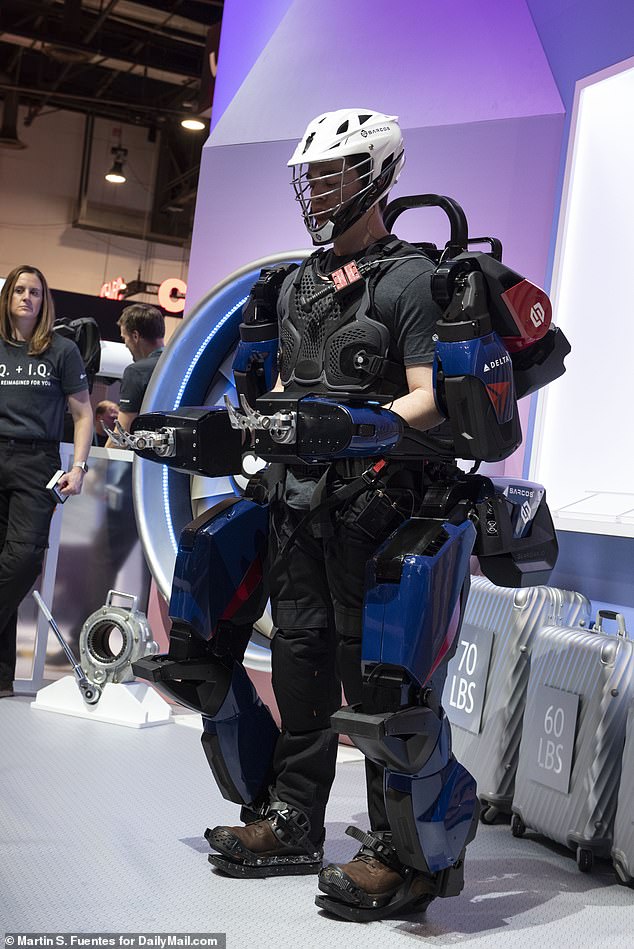 While many exosuits are aimed at assisting with normal walking, others are designed to give people superhuman abilities.

Demonstrating the suit at the Consumer Electronic Showcase (CES) in Las Vegas, Delta and its partner, Sarcos Robotics, said the Guardian can make lifting 200 pounds feel like a mere 20 pounds.

The suit could have numerous industrial uses, from aiding construction to quickly moving luggage on and off a plane.