An exoskeleton boot that enables the wearer to walk 9 per cent faster than with normal shoes, and with 17 per cent less effort, has been revealed by scientists.

Created at Stanford University, the robotic footwear comes with a motor that works with calf muscles to give the wearer an extra push with every step.

The precisely-timed motor controls the boot so that it imparts a ‘torque’ – a twisting force that can cause rotation around an axis – at the leg joint.

The new creation could be widely used in everyday life, by people with mobility impairments or with physically demanding jobs, for example.

Created at Stanford, the robotic footwear comes with a motor that works with calf muscles to give the wearer an extra push with every step 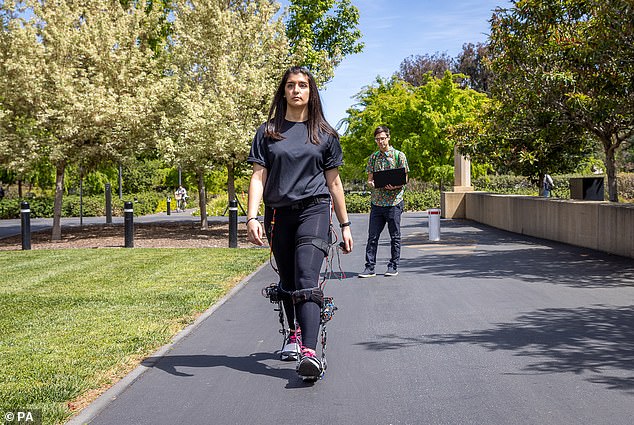 The exoskeleton ‘boot’ can adapt to the user to help people walk faster and more efficiently in real-world conditions. Pictured, Ava Lakmazaheri, a student at Stanford University, testing the exoskeleton 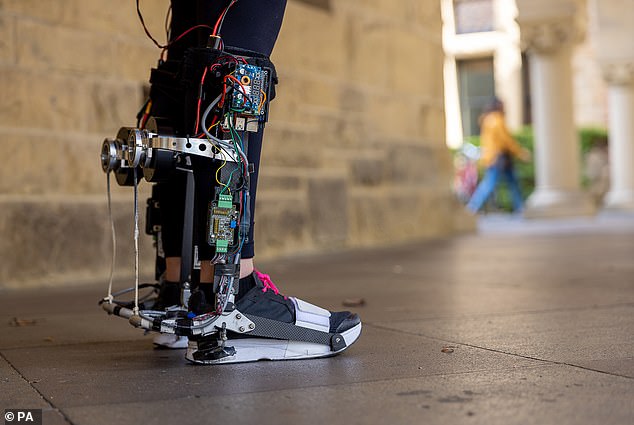 WHAT IS AN EXOSKELETON?

An exoskeleton is a hard covering that supports and protects the bodies of some types of animals.

The word exoskeleton means ‘outside skeleton’.

Many invertebrates, or animals without backbones, have exoskeletons.

Insects are the largest group of animals that have an exoskeleton.

The word ‘exoskeleton’ is used to describe a mechanical shell that covers the user and them provides robotic support.

The boot has been described in a new study led by experts at Stanford Biomechatronics Laboratory in California and published today in Nature.

‘There are a number of clinical populations we hope to help including older adults, people with muscle weakness from a variety of conditions like stroke, and specific injury recoveries for things like achilles tendon strain,’ said study author Patrick Slade.

‘We are starting to perform studies to explore the benefits of using our device with older adults.

‘In general, older adults have muscle loss, walk more slowly, and require more effort to walk at the same speeds as younger people so we are excited about the possibility of helping reverse these trends.’

The set-up consists of one exoskeleton ‘boot’ worn on each ankle and a battery pack around the waist.

Each boot includes sensors to monitor movement, a motor to produce ‘assistive torques’, a carbon fibre and aluminium frame, and a shoe and a calf strap to transfer forces to the body.

The engineers used a machine learning model to develop their untethered exoskeleton boot – which can be personalised to suit the wearer’s needs.

The model can assess how exoskeleton devices affect walking based on information (such as ankle angle and speed) collected by the sensors to tune the device so that it best suits the walking characteristics of the individual user.

Tests with young and healthy participants showed that using the device led to a 9 per cent increase in walking speed with 17 per cent less energy expended per distance travelled, compared to walking in normal shoes. 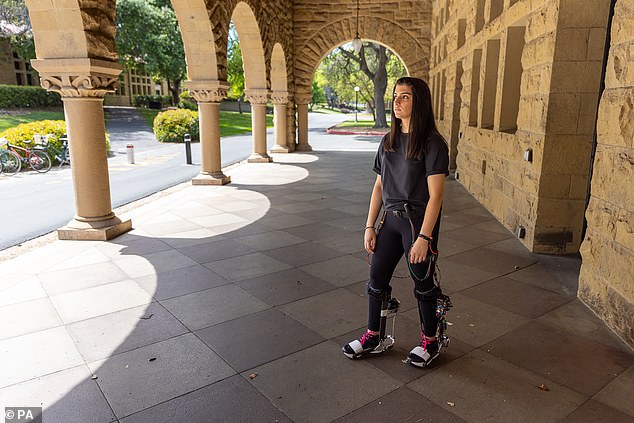 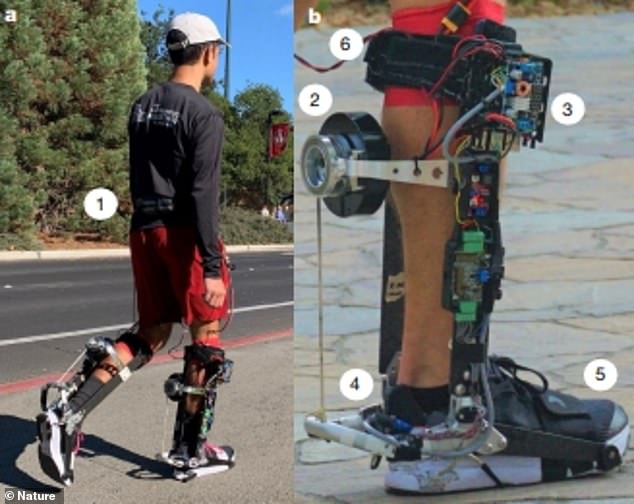 a) A participant walking in a community setting wearing the exoskeleton. b, The exoskeleton consists of (1) a battery pack worn on the waist, (2) a motor, drum and rope transmission to produce assistive torques, (3) electronics to receive sensor data, command the motor and perform optimization, (4) a carbon fibre and aluminium frame to transmit forces, and (5) a shoe and (6) a calf strap to transfer forces to the body

The energy savings and speed boost were equivalent to taking off a 9.2 kg backpack, the researchers said.

In the near future, the researchers are planning to develop variations of the device that can be used to help improve balance and reduce joint pain.

They aim to work with commercial partners to turn their exoskeleton boots into a saleable product.

‘I believe that over the next decade we’ll see these ideas of personalising assistance and effective portable exoskeletons help many people overcome mobility challenges or maintain their ability to live active, independent and meaningful lives,’ Slade said. 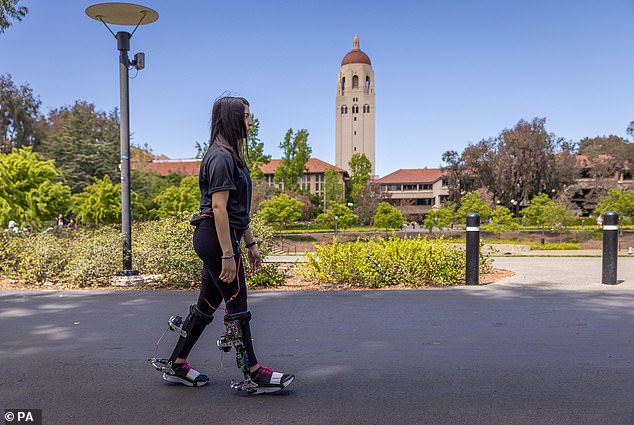 Exoskeletons that assist leg movement, by increasing walking speed and reducing the energy required, can be helpful for people with mobility impairments or with physically demanding jobs

Carlos Rodriguez-Guerrero, a mechanics researcher at KU Leuven in Belgium, who was not involved with the study, called it an ‘innovative approach’

The boost in simplicity that Slade and colleagues’ method offers is an inspiring step forwards in the field of wearable robotics,’ he said in an accompany News & Views piece in the new issue of Nature.

‘It remains to be seen whether the authors’ approach can be applied to more complex movements, such as reaching – a task that is far less predictable than walking – with an exoskeleton built to enhance a human arm.’

ARIZONA VETERAN WALKS WITH ROBOTIC HELP AFTER BEING IN A WHEELCHAIR

A US Army veteran who suffered a spinal-cord injury in Iraq can walk again thanks to a robotic exoskeleton.

Richard Neider was unable to walk after being injured in an incident with an improvised explosive device (IED) in 2005.

But he’s been fitted with a $75,000 battery-powered device that has sensors that detect when a person shifts their weight, as well as a motor to help them walk.

‘I can’t ever stop smiling when I’m in it,’ the former Army sergeant, who saw his injury worsen over time, tells AZFamily. ‘It’s complete independence, being able to be on my feet, be eye-to-eye with everybody.’

Dan Bonaroti, a physical therapist and owner of Touchstone Rehabilitation, said the technology has broader potential uses than just patients like Neider.

‘It can be used for someone who is completely paralyzed but can also be used by people who have some ability to walk but have difficulty,’ he said.

‘It’s almost a bigger purpose for the second reason, that expands it people with stroke and incomplete spinal cord injury.’