Victoria Beckham’s fallout with daughter-in-law Nicola Peltz, which has strained her relationship with son Brooklyn, has left her ‘heartbroken’.

The former pop star is concerned over how it will affect her closeness with the photographer-turned-chef, and is said to be ‘distraught and fearful’, Katie Hind reports.

Mrs Beckham has relied on her eldest child for support while her football-playing husband travelled the world, and their relationship has previously been described as ‘inseparable’, according to Mail+.

The cold war began when Nicola Peltz and Mrs Beckham clashed over her wedding dress and the Transformers star accused her new mother-in-law of stealing the limelight at her wedding.

The Beckhams have refused to pay for Brooklyn’s US green card, a source claims, and, most recently, the one-time Spice Girl snubbed her son and daughter-in-law for her new Paris Fashion Week show, says another family insider.

Though the newlywed chef and Transformers actress are happy and fawning over each other, trouble has been brewing between their two houses.

A source who knows Nicola well says that the drama began around her and Brooklyn’s Palm Beach, Florida, wedding – and has only escalated.

As a celebrity designer, many in the fashion world assumed Victoria, 48, would be designing Nicola’s wedding dress. But instead, the bride appeared on the May cover of Vogue in Valentino couture.

Nicola later gave an interview insisting that ditching Victoria’s offer was not designed to be a slight against her new mother-in-law.

‘I was going to and I really wanted to, and then a few months down the line, she realized that her atelier couldn’t do it, so then I had to pick another dress,’ she told Variety last month.

But one insider said Nicola, 27, ‘never’ intended to wear Victoria Beckham at her wedding. 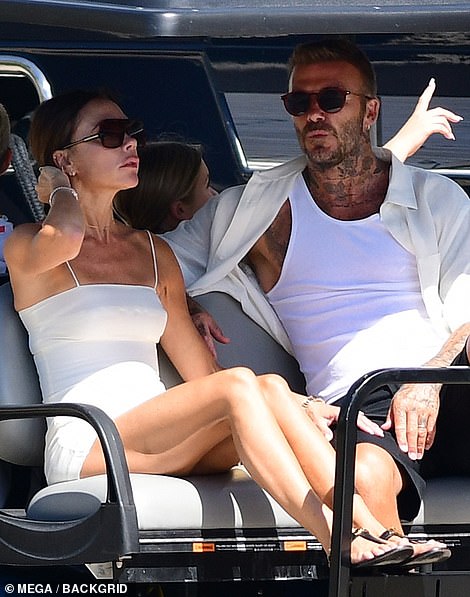 The drama between Nicola Peltz and Victoria Beckham began around Nicola and Brooklyn Beckham’s wedding and has only gotten worse, a source tells DailyMail.com 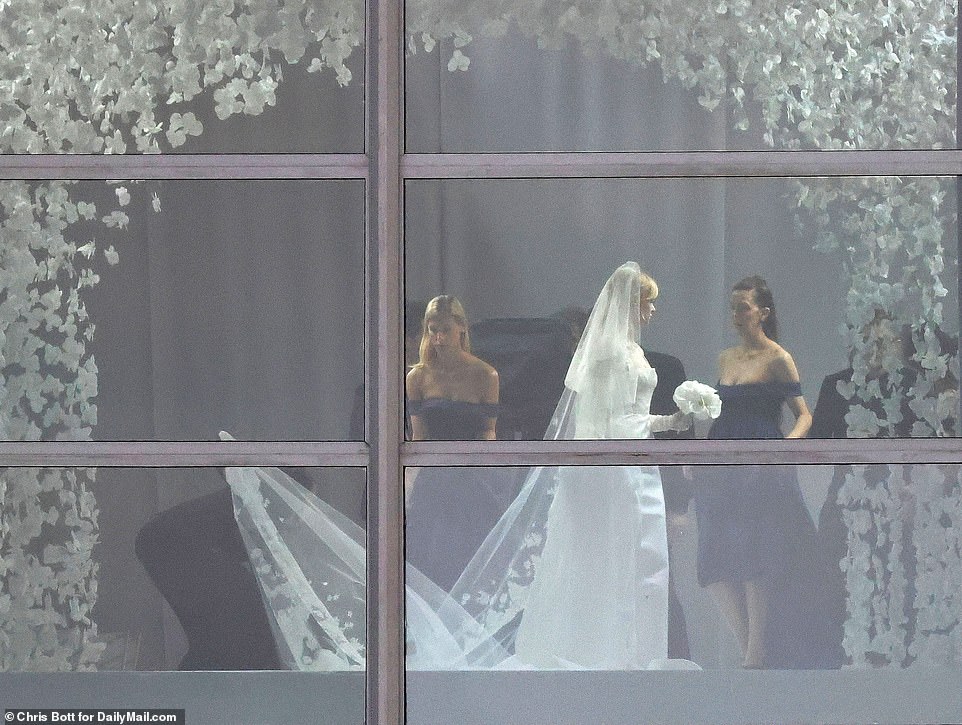 One insider said Nicola, 27, ‘never’ intended to wear a wedding dress designed by Posh Spice. ‘She was always just gonna let her design something. She was never gonna put that on her,’ the source said. ‘She has too many actually talented designer friends’ 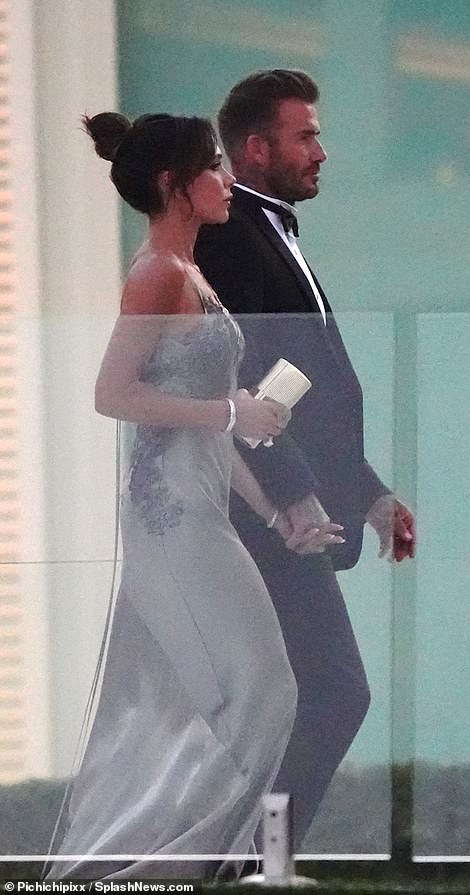 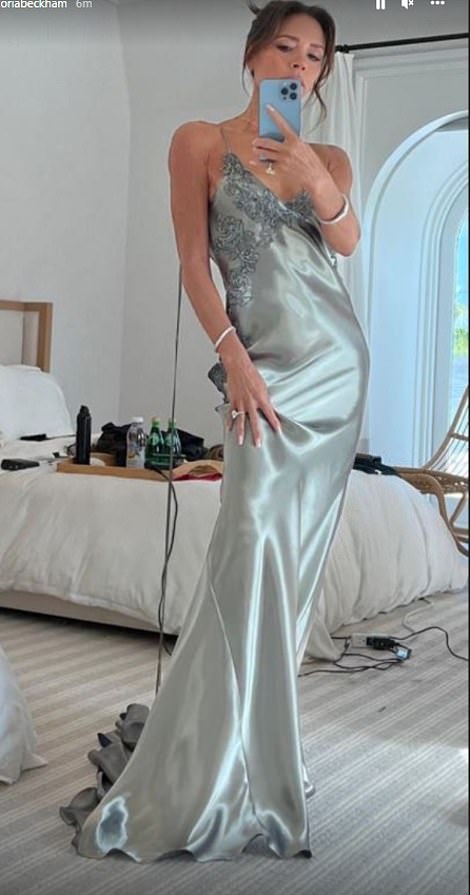 Another source said Nicola was considering wearing Posh’s design, but Victoria didn’t tell the Peltzes that her atelier couldn’t make the dress for Nicola until the last minute. Victoria wore her own design to the wedding 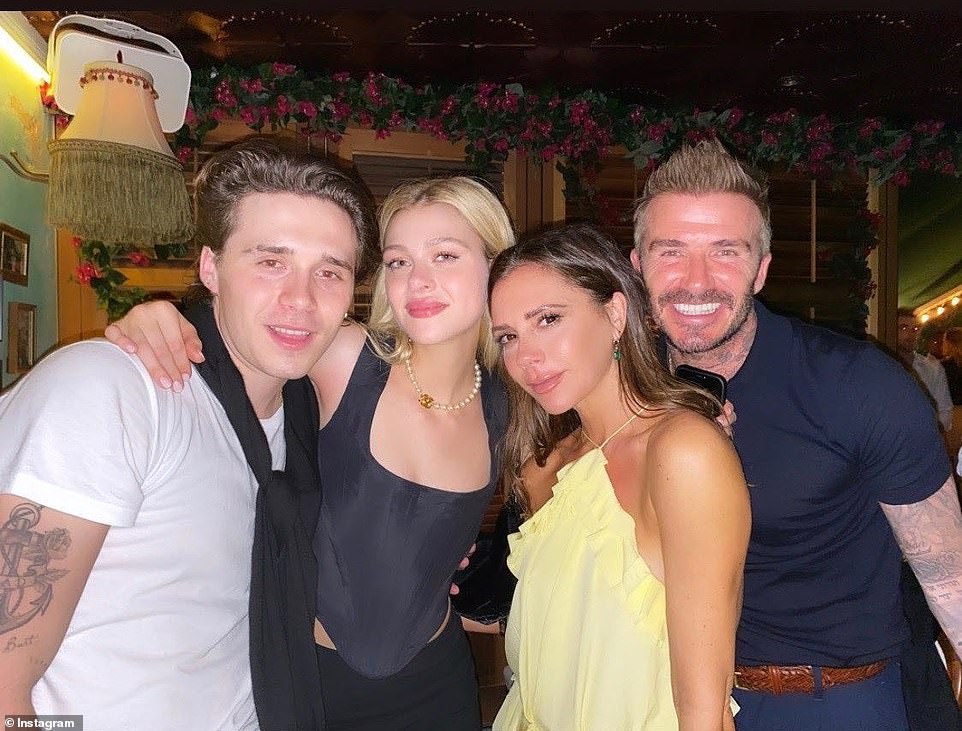 Sources close to the families told DailyMail.com that Victoria and David refused to pay for their son Brooklyn’s US green card and instead Peltz’s billionaire father Nelson is footing the bill

‘She was always just going to let her design something. But she was never going put that on her,’ the source said. ‘She has too many actually talented designer friends.

‘It’s like when you have an in-law, and they say they make the best meatballs, you hate meatballs, but you let them cook it anyway. That’s exactly what happened.

‘She was never, ever going to wear it.’ 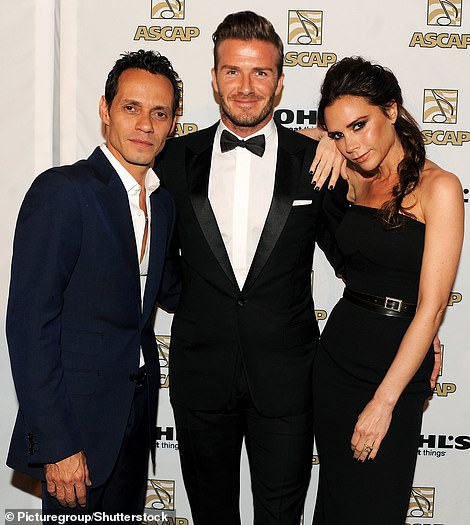 Nicola allegedly stormed out of her wedding after Marc Anthony gushed over Victoria during a speech. ‘It was totally just an ode to Victoria and how awesome she is. Nicola loves to be the center of attention, especially on her wedding day. So this really, really p***ed her off,’ the source said

Another source with knowledge of the dress controversy was led to believe Nicola really was considering wearing her mother-in-law’s design, but was left in the lurch at the ‘last minute.’

‘Valentino was concerned that they didn’t’ have enough time to do the dress because Victoria didn’t tell the Peltzes that her atelier couldn’t make the dress for Nicola until the last minute,’ the second source said.

After the dress drama unfolded, Nicola became offended when David and Victoria’s close friend ​​Marc Anthony gave a gushing speech at her wedding – all about Victoria, according to one insider.

‘It was totally just an ode to Victoria and how awesome she is. Nicola loves to be the center of attention, especially on her wedding day. So this really, really p***ed her off,’ the source said.

‘She stormed off in the middle of her wedding reception with [sister] Brittany and her mom, and was crying her eyes out.’

Another source agreed Nicola was upset during the reception – but said it wasn’t because Anthony was gushing about Victoria.

This insider claimed that Posh Spice stole the newlyweds’ First Dance song for her own mother-son dance moments before Brooklyn and Nicola were meant to two-step in front of their guests.

The First Dance song was Anthony’s ‘You Sang To Me’. The romantic love song includes the lyrics ‘Now I’m crazy for your love’, ‘When I called you late last night you see I was falling into love’ and ‘Girl, I live for how you make me feel’.

A source at the wedding told DailyMail.com: ‘Marc asked Nicola and Brooklyn to pick their favorite song to dedicate to them, and that one was their favorite.’

‘Nicola left the room because she and Brooklyn thought Marc was introducing them for a special dance to a love song the couple had chosen,’ the second source said.

‘But without any warning and at the request of Victoria, Marc switched it to a mother-son dance using the same song.

‘Most of the guests could tell something off had happened. It was uncomfortable for the couple who were thinking it was to be a special moment for them.’

This insider also claimed that Grammy-winning Latin pop star Anthony was paid a handsome sum by the Peltz family to appear and perform with a band, despite his close friendship with David.

A source close to the Peltzes claimed that Nicola was upset over the alleged song-stealing, and not Marc’s speech.

‘Brooklyn and Nicola knew Marc Anthony was close to the Beckhams and would of course be complementary to them in his talk. If Nicola had been concerned about that, her father would not have paid to have Marc Anthony and his band perform,’ the source said. 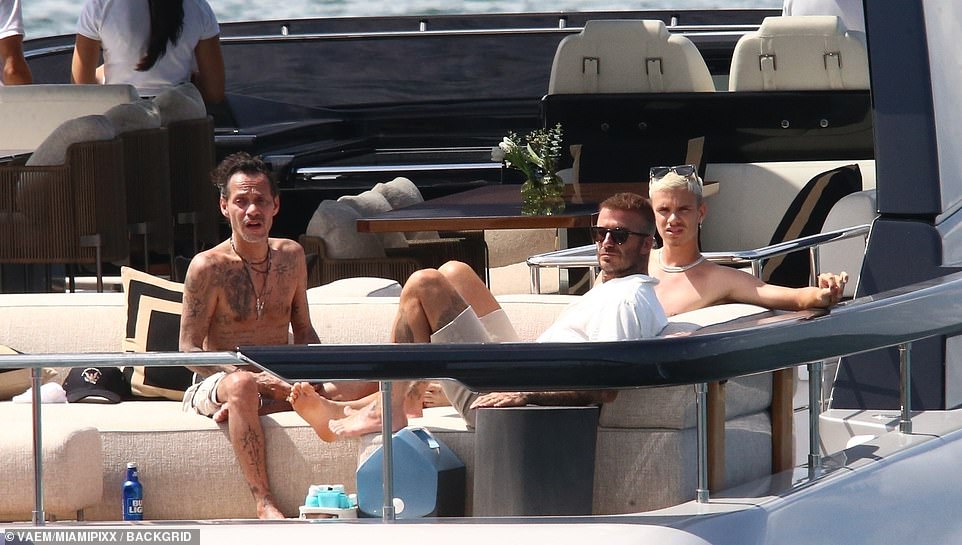 Marc Anthony, David and Romeo Beckham are seen on a boat in Miami. This insider claimed that Grammy-winning Latin pop star Anthony was paid a handsome sum by the Peltz family to appear and perform with a band, despite his close friendship with David 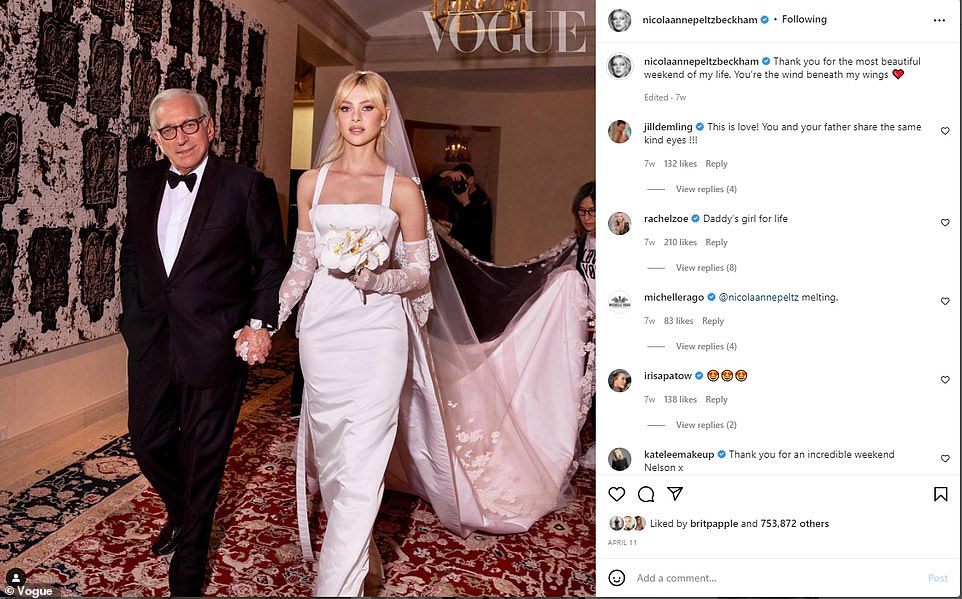 Brooklyn is relying on Nicola’s father Nelson Peltz to fund his American green card application, after his parents refused to pay, according to the source 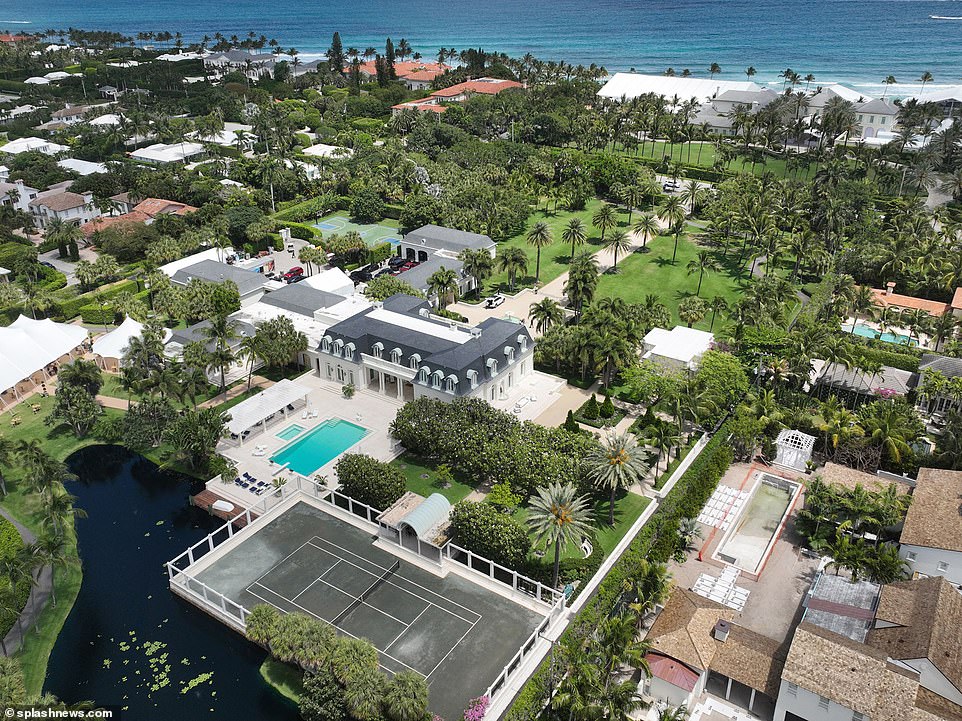 The Peltz mansion in Florida is pictured. ‘It’s quite intimidating, the Peltz household. [Brooklyn] is living on the property. They’re living off her dad’s coin’ 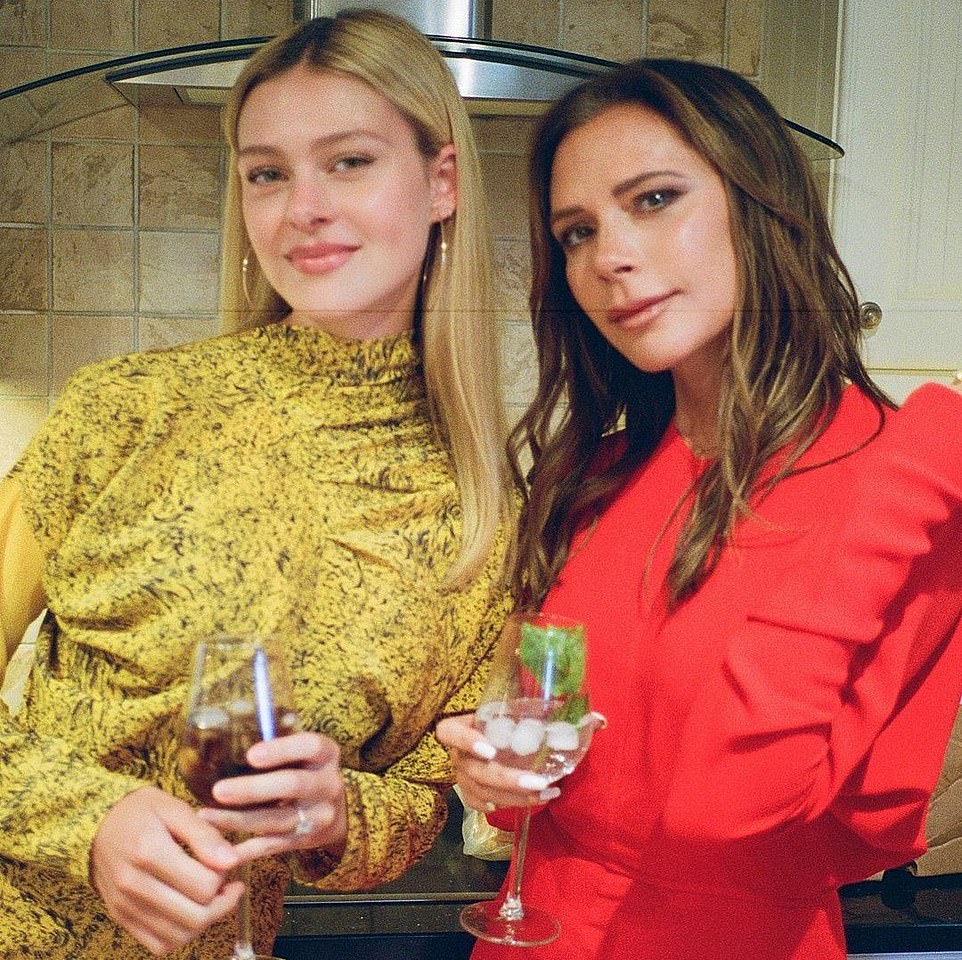 Before the feud, Nicola told her followers on social media that Victoria was her ‘role model’ in a heartfelt post for her birthday in 2021. Things have since soured

Brooklyn, 23, has been feeling caught in the crossfire, with conflicting loyalties.

‘Brooklyn felt really bad because his mom just didn’t give a s**t. She thinks that Nicky’s a spoiled brat. He felt responsible,’ the source said. 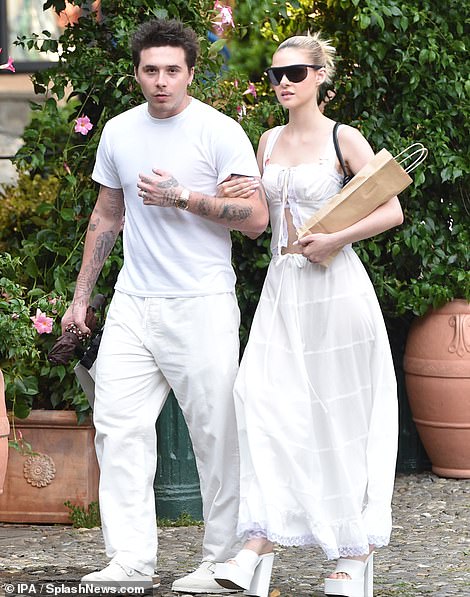 A source said Brooklyn, 23, has been feeling caught in the crossfire, with conflicting loyalties

‘It’s quite intimidating, the Peltz household. He’s living on the property. They’re living off her dad’s coin. And there’s [Peltz patriarch] Nelson’s daughter completely p***ed off and upset on her wedding day, and it was his parents’ fault.’

Brooklyn is even relying on Peltz patronage for funding his American green card application, after his parents refused to pay, according to the source.

‘Nelson is paying for Brooklyn’s visa and all of his legal fees. The Beckhams wouldn’t do it,’ the source claims.

Nicola’s father was overheard coming across his daughter and Brooklyn at their mansion one afternoon, the Beckham son still in his pajamas.

‘He’s a bit sharp with Brooklyn,’ the source said. ‘You could tell Nelson was just a bit p***ed. He was like ”So Brooklyn, what did you do today? Did you get on to your lawyer yet? Your lawyer has been asking me about paperwork. All you gotta do is pick up the phone. I’m paying for the rest.”

Another  family insider told DailyMail.com that Nelson is in fact ‘extremely fond’ of Brooklyn and ‘treats him like his own son’, adding that he would never chide him.

But the first source, close to Brooklyn and Nicola, said that her family’s largesse and the drama surrounding them has driven a wedge between Brooklyn and his parents.

‘Nicky and Brooklyn are very similar in the fact that they grew up in a big family, who are all up in each other’s business all the time,’ the insider said.

‘I always knew that Brooklyn would have to break away from his family because that’s what happens with the Peltzes. If you become one of the Peltzes, you have to leave behind your whole family in your life. Nothing existed before you met them. They sort of suck you in.’

Another source close to the couple has revealed yet more turmoil. 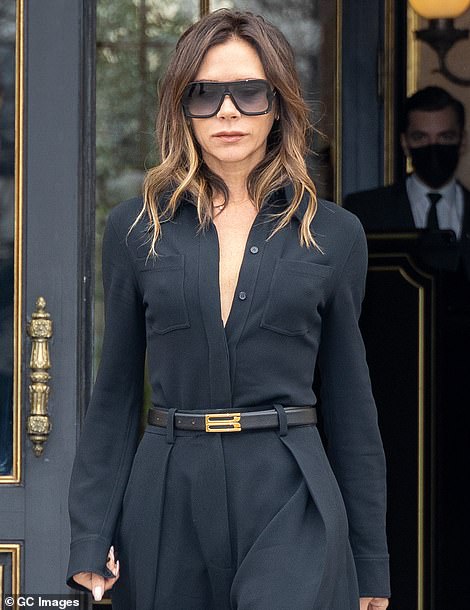 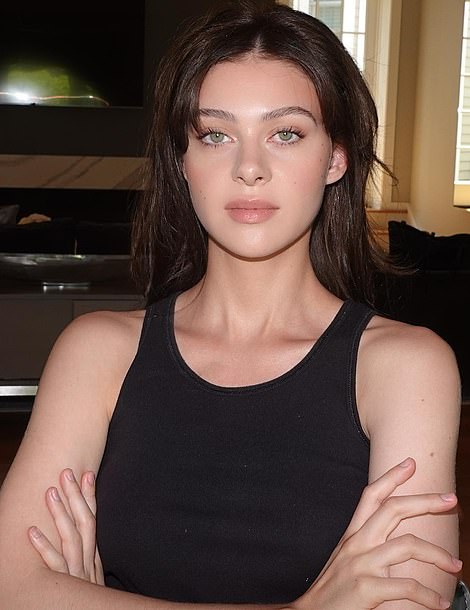 According to this family friend, Brooklyn and his new wife have been left feeling snubbed after they only discovered Victoria was hosting a show at Paris Fashion Week from a magazine article. ‘People close to Nicky have said that they think it’s because Victoria’s concerned that all of the attention will be on Nicola and Brooklyn, that they’ll steal the thunder of the show,’ a source said 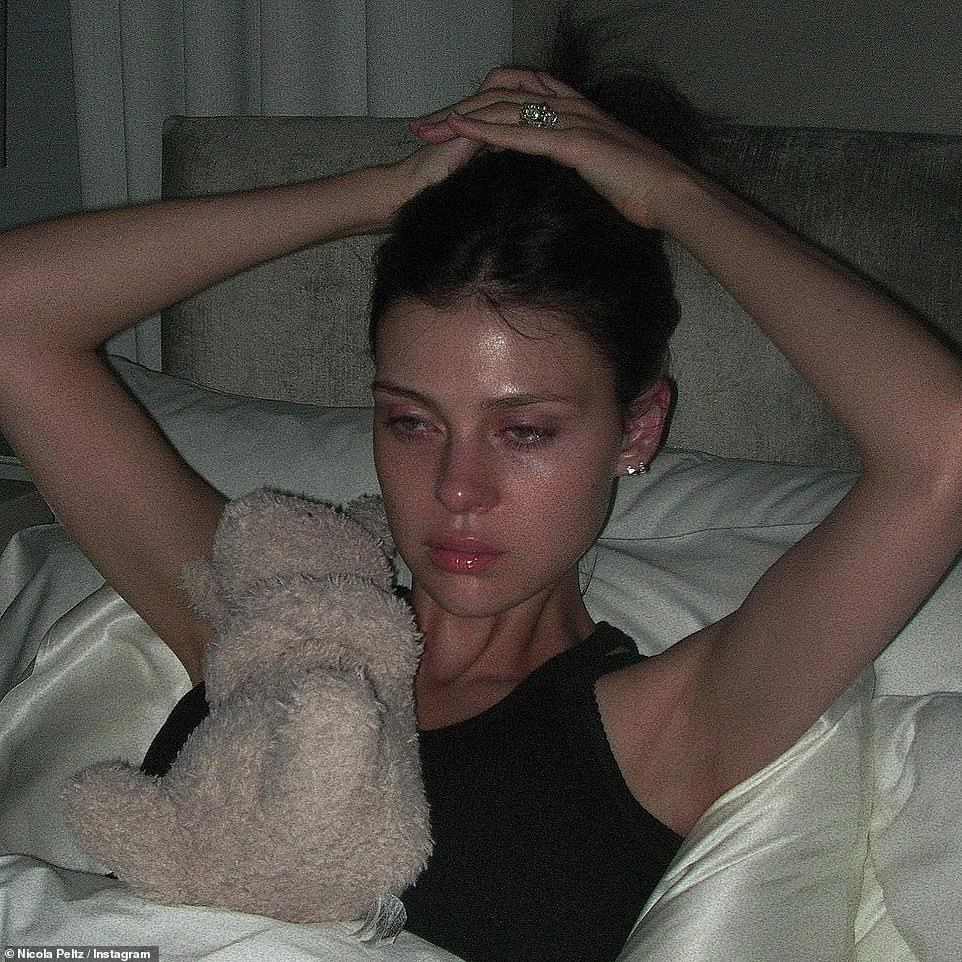 Nicola shared an emotional post in which she candidly opened up about her upbringing. But many believed the cryptic message is another dig amid the ongoing alleged feud she has with her mother-in-law

Her post was met with several supportive messages from her fans and showbiz pals, with a significant response coming from her husband Brooklyn

According to this family friend, Brooklyn and his new wife have been left feeling snubbed after they only discovered Victoria was hosting a show at Paris Fashion Week from a magazine article.

‘Victoria didn’t call Brooklyn and say, hey I’m having this show, we’d love to have you there. The first they found out about it was from Women’s Wear Daily,’ the second source said.

‘All Victoria’s shows have always been a family affair,’ they added. ‘Nicola and Brooklyn were just surprised and not expecting that.

‘People close to Nicky have said that they think it’s because Victoria’s concerned that all of the attention will be on Nicola and Brooklyn, that they’ll steal the thunder of the show.’

However, this source close to the Peltz family played down claims of a wider feud.

‘The wedding felt very normal. That’s why this is a surprise,’ they said, adding that the wedding dress drama was never really a problem for either woman.

‘It was kind of Nicola to bring it all to Victoria and say I want this to be a family affair,’ the source said. ‘And then it was kind of Victoria to say, Listen, I want you to have the dress that you want. And it’s not something I can make.’

Representatives for the Beckham and Peltz families did not respond to requests for comment.