The greatest weapon we possess in the battle against Covid-19 is the evidence accumulated by scientists. Although this is a new disease, essentially unknown a year ago, we have gathered a vast amount of data on it.

No other disease in history has been so intensely studied by so many people around the world over such a concentrated period, both in the lab and in the real world.

Yet the British Government appears to be paying far less attention to this vital evidence than it should be.

The statement to the Commons earlier this week by the Health Secretary Matt Hancock was largely preoccupied instead with the overall number of cases. 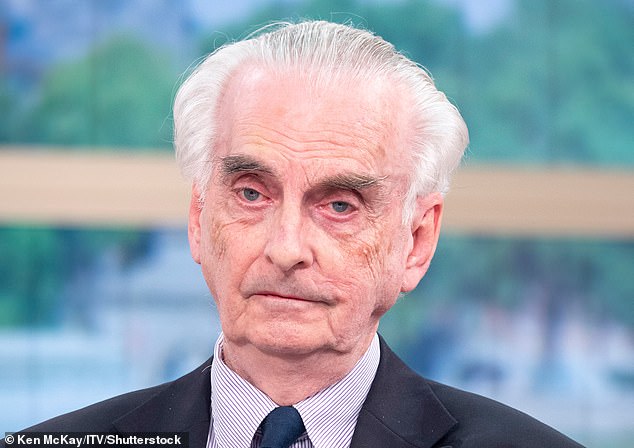 The greatest weapon we possess in the battle against Covid-19 is the evidence accumulated by scientists, says emeritus professor of bacteriology at the University of Aberdeen

This headline figure is misleading. Covid-19 does not affect all people equally.

For the majority, it is a comparatively innocuous infection that many young people will have without symptoms. For the vulnerable minority, especially the elderly, it can be very serious.

In the over-80s, in fact, the mortality rate is as high as it was for smallpox before the introduction of vaccines, more than two centuries ago. That is to say, for patients in that age group, Covid-19 is a very grave threat indeed.

Government policy, such as the introduction of a nightlife curfew yesterday, seems blind to this crucial difference. It concentrates simply on reducing the blanket figure, without making the vulnerable a priority.

This approach lacks common sense and seems to be driven solely by a fear of red bars on graphs. 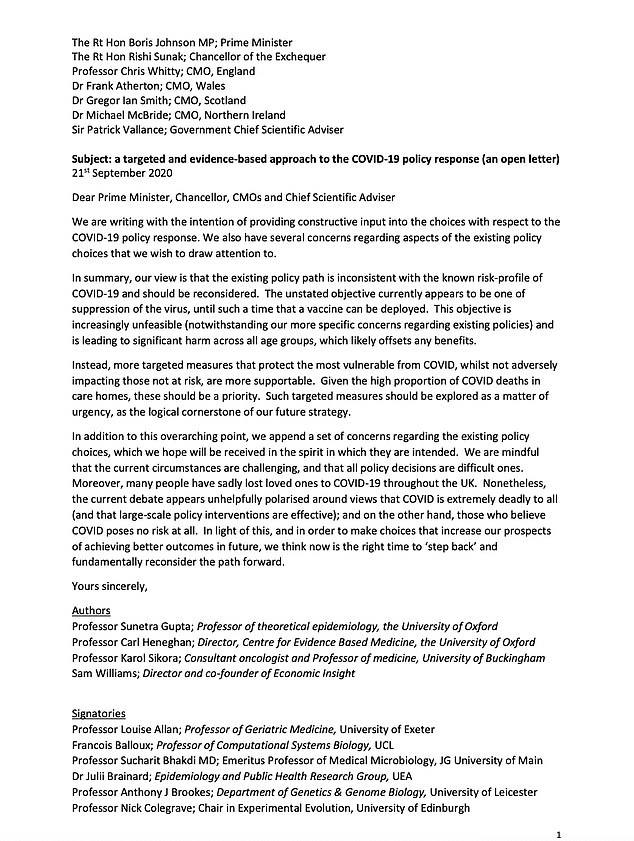 That is why about 30 scientific experts and I signed a letter to the Prime Minister and his advisers this week, calling for a targeted approach that is based on evidence.

At the forefront of this approach should be how we handle the crisis in care homes.

At the start of the pandemic, the disease was allowed to run rampant in homes for the elderly, and the result was many thousands of preventable deaths. It is no exaggeration to call this a national scandal of massive proportions.

The crisis is still not fully under control. Care homes should be at the apex of protective controls.

Above all, the policy ought to focus on ensuring Covid-19 does not get into the homes in the first place. The only effective way to do that is by consistent, reliable testing with quick results. 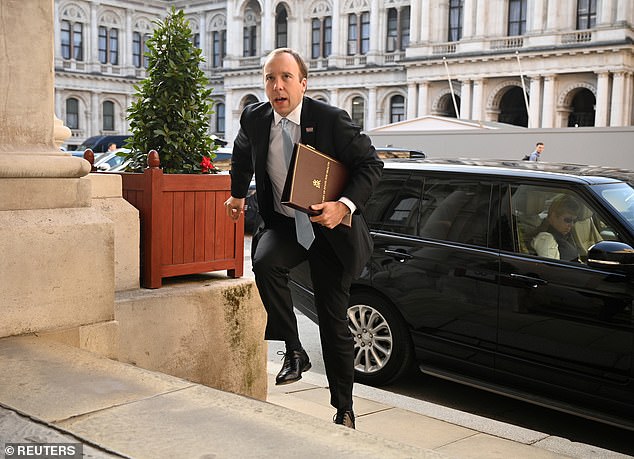 It is impractical to expect carers, who work with very elderly residents, many of whom have dementia, to use full PPE or protective equipment.

The patients might well fail to understand what is happening, and be frightened.

It is also impossible to do this care work while maintaining social distance. Physical contact is an integral part of the job.

All the emphasis should be on frequent testing, to make sure carers can be confident they are not carrying the virus.

Yet we are hearing next to nothing from Government ministers about this. Most of our hospitals are not working at anything close to capacity. 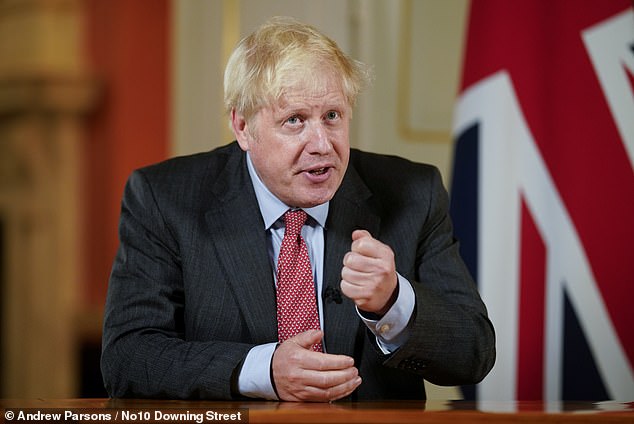 About 30 scientific experts and professor Hugh Pennington signed a letter to Prime Minister Boris Johnson (pictured addressing the nation on the new coronavirus rules tonight) and his advisers this week, calling for a targeted approach that is based on evidence

People are staying away as much as they can, believing both that they should leave the NHS to get on with handling Covid-19 cases and that hospitals are hotbeds of infection. Yet these are both misconceptions.

Serious illnesses including heart disease and cancer are being missed, because people are too scared to report their symptoms or get a screening.

As a result, lives are being lost. Already the data shows that unnecessary death or ‘excess mortality’ is on the rise.

The Government’s chief aim appears to be keeping the overall number of Covid-19 cases as low as possible, until a vaccine can be released. 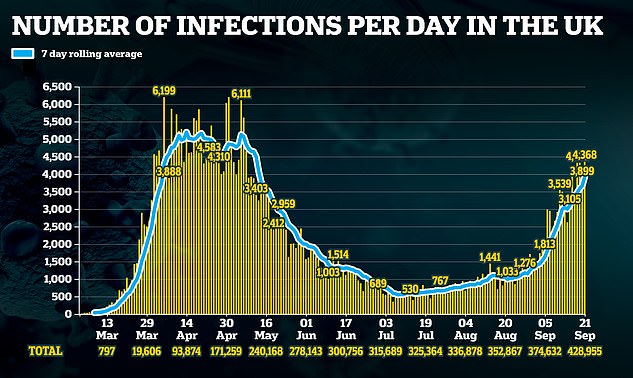 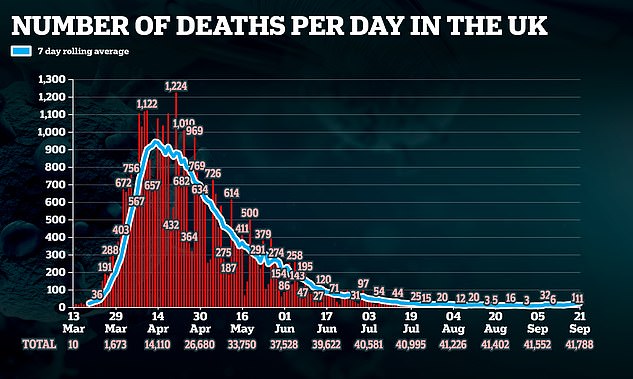 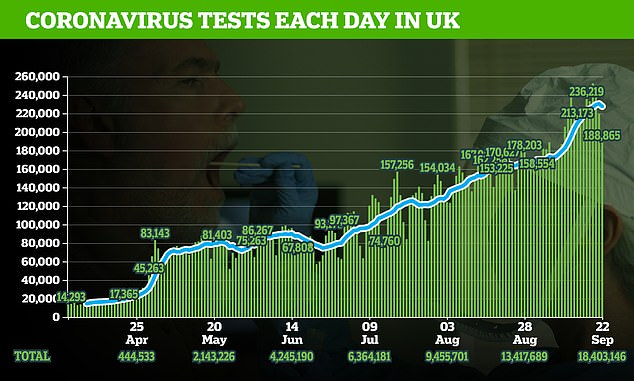 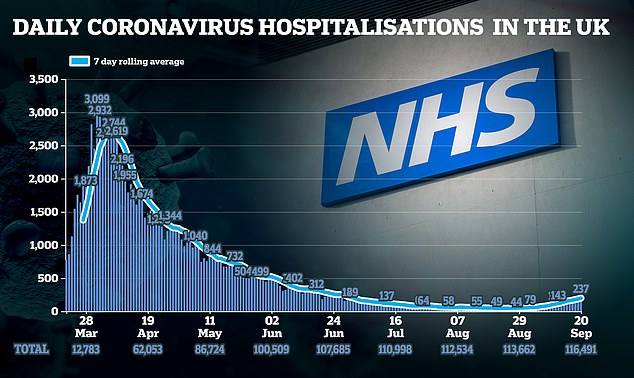 Even by the most optimistic projection, this will not happen before next year, and a vaccination programme will bring its own problems.

Because multiple vaccines are being trialled and tested, the Government will face a difficult choice over which one to implement.

Worse, because this jab will be fast-tracked into use, it will be hard to assess how safe it is, or how good it is at stemming infections.

Even the best vaccines won’t work unless they are applied across a large majority of the population. We already know from opinion polls that a substantial proportion of people will baulk at having a largely untried Covid-19 vaccine. 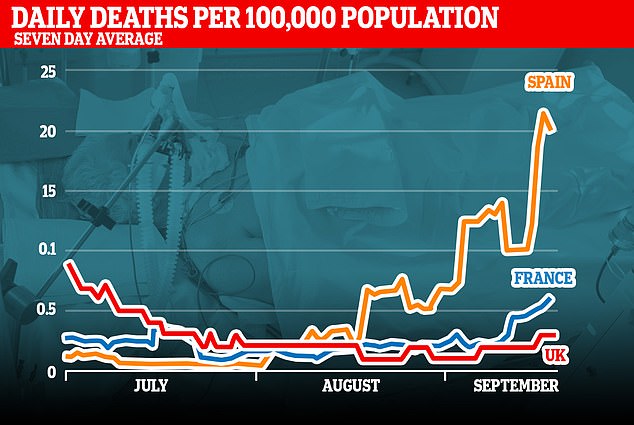 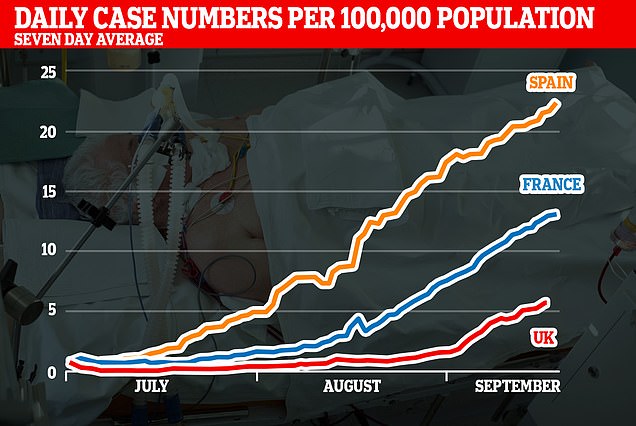 Especially as virtually all under-40s wouldn’t need one for their own personal health, we’d be asking millions of people to have a jab for purely altruistic reasons, to protect others.

I want to be optimistic, but vaccines will not be the silver bullet that ends the pandemic.

Waiting is pointless. We have to act now and be practical. That means focusing on protecting the vulnerable, most of all in our care homes, with effective testing.

This is the crucial aspect we must get right. Shutting down the country is a dangerous distraction.

When will ‘the experts’ face the facts about Covid? They say the virus is a risk to everyone – but here are the stats that reveal the truth

By ELEANOR HAYWARD HEALTH REPORTER FOR THE DAILY MAIL

The majority of people who are infected with coronavirus will never even know they had it.

This staggering disparity in outcomes is what makes it so difficult to settle upon the best course of action. Why should teenagers have to stay at home when their risk of death is vanishingly small?

Since the pandemic was declared, the medical community identified several risk factors for severe Covid-19 – including age, sex and obesity. 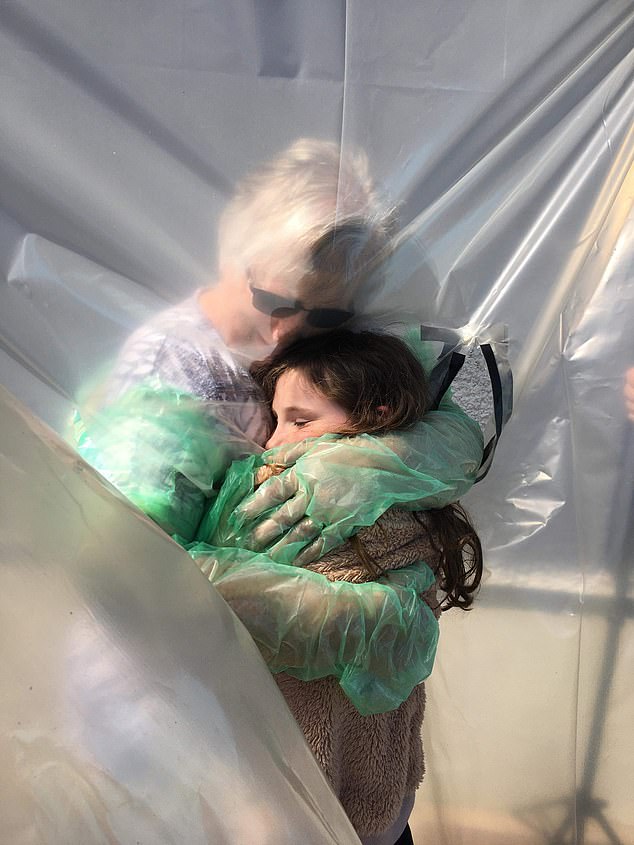 Professor Chris Whitty said on Monday: ‘You cannot in an epidemic just take your own risk – unfortunately, you’re taking a risk on behalf of everybody else.

‘If I as an individual increase my risk, I increase the risk to everyone around me… sooner or later the chain will lead to people who are vulnerable or elderly.’

But some experts, such as former Supreme Court justice Lord Sumption and Oxford’s Professor Carl Heneghan, claim that our detailed knowledge of the risk factors, outlined below, make blanket lockdown measures unnecessary.

Instead, they argue for targeted strategies to ‘shield’ the most vulnerable, including those in care homes, while allowing everyone else to get on with their lives.

Ministers currently believe this thinking is flawed because there is no way of segregating society into the ‘at risk’ groups. 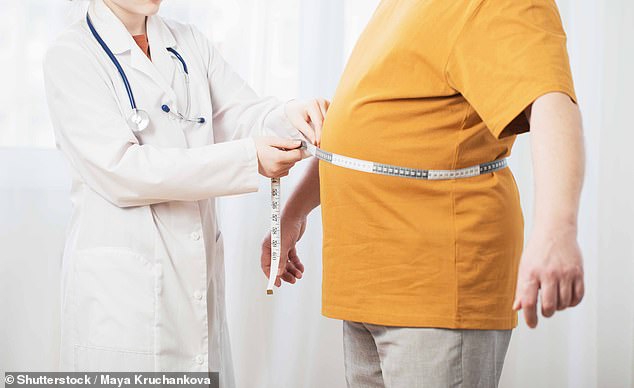 Being obese increases the likelihood of dying from Covid-19 by up to 90 per cent, according to Public Health England

These, then, are the extraordinary facts about Covid: 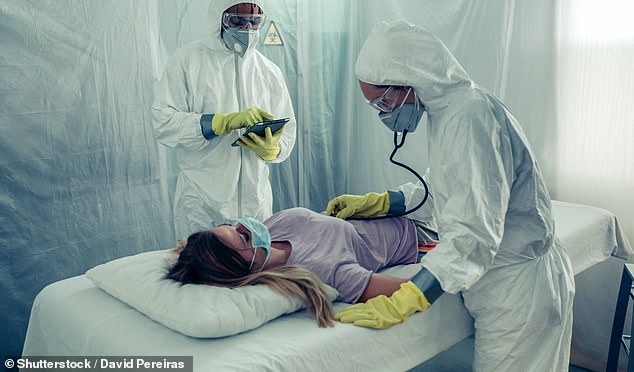 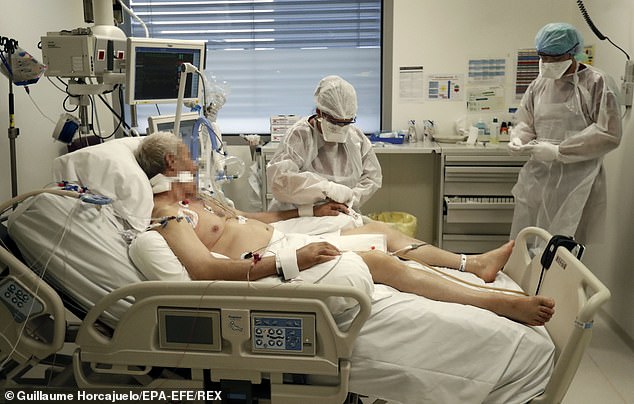 It has been clear since the virus first emerged that men are more susceptible to severe illness than women. In the UK around 4,500 more men have died than women 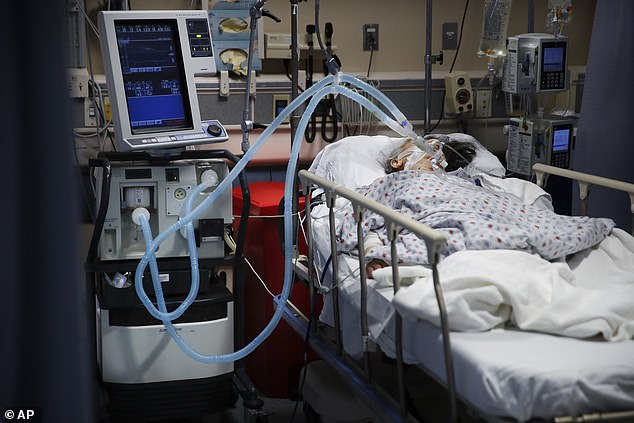 More than 95 per cent of patients who die have an underlying health condition – of the 29,705 patients who died in English hospitals, some 28,309 had a pre-existing illness