U.S. authorities have arrested a former Special Forces soldier and another man wanted by Japan on charges that they enabled the escape of former Nissan Motor Co boss Carlos Ghosn out of the country.

Japan had in January issued arrest warrants for both men along with a third, George-Antoine Zayek, in connection with faciliating the Dec. 29, 2019 escape.

The Taylors are scheduled to appear by video conference before a federal judge later on Wednesday. 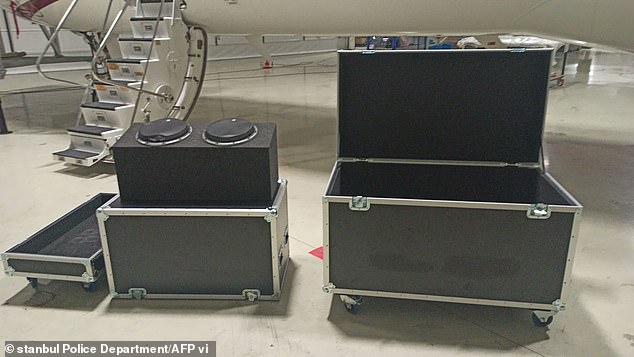 The case which the former Nissan chief Carlos Ghosn allegedly hid in while fleeing from Japan, where he was being held under house arrest, via Turkey to Lebanon 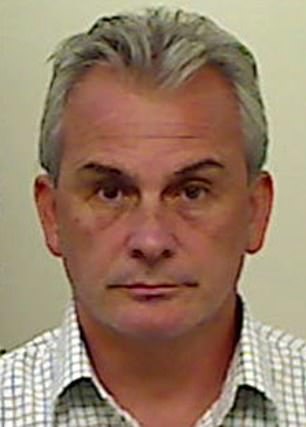 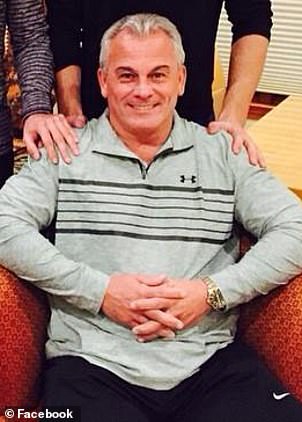 Lawyers for the men could not be immediately identified.

Ghosn fled to Lebanon, his childhood home, at the end of last year, while he was awaiting trial on charges of under-reporting earnings, breach of trust and misappropriation of company funds, all of which he denies.

The multi-millionaire was arrested in November 2018 and spent months in prison and under house arrest.

He was being monitored 24 hours a day with restricted access to internet when he fled to Beirut on December 24.

It is believed he first boarded a bullet train from Tokyo to Osaka, where he was picked up by a private jet flying to Istanbul.

He is understood to have eventually arrived in Beirut on December 30.

Four pilots, two other flight attendants, and an airline executive have already been charged in connection with his escape.

Micheal and Peter Taylor are suspected of taking Ghosn from his Tokyo home to a hotel in Osaka, western Japan, and hiding him inside a musical instrument case before taking him to Kansai airport where they allegedly helped him evade a security inspection. 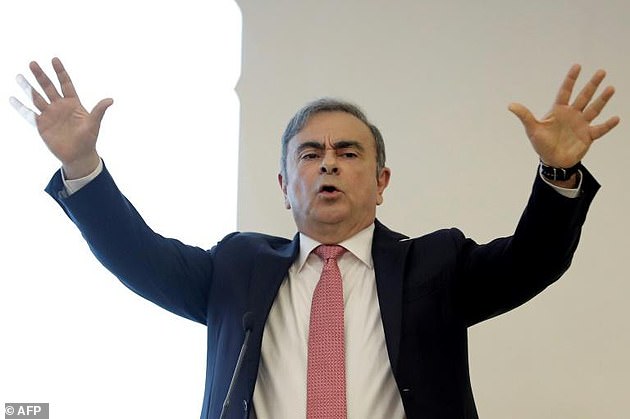 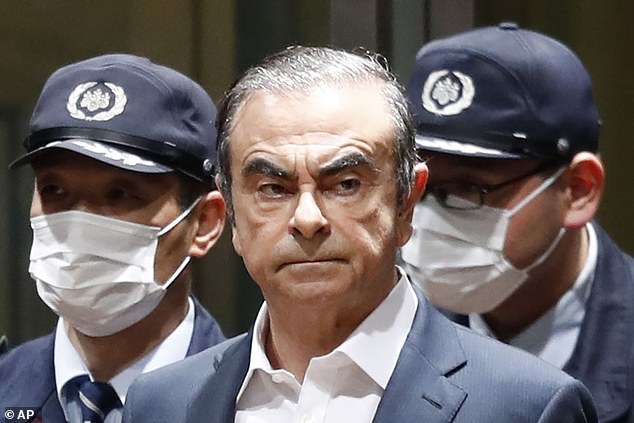 Ghosn was under house arrest on bail in Tokyo when he fled the country. He is pictured here in April last year being released from jail to await trial on £65million corruption charges

CCTV emerged in January showing Michael Taylor, who became a security consultant after leaving the military, and Zayek at Istanbul airport as Ghosn, 65, changed planes en route to his final destination.

The warrants are the first official confirmation of the reported details about how Ghosn slipped past security and jumped bail shortly after Christmas.

The escape of the high-profile suspect, who had been under house arrest on bail, left Japanese officials red-faced and they have demanded Ghosn returns to face trial.

Ghosn was arrested in November 2018 and faced four charges of financial misconduct, which he denies.

Ghosn claims there was a plot against him and that he had no chance of a fair trial.

He has said he did not believe he would get a fair trial, and accused Nissan executives opposed to his plans to integrate the firm further with its French partner Renault of effectively cooking up the charges against him.

Lebanon does not have an extradition treaty with Japan.

Turkish prosecutors in January said Taylor senior and Zayek accompanied the former Nissan boss on the first leg of his journey from Osaka to Ataturk Airport, a smaller airfield in the Turkish capital, on a private jet.

They claim Ghosn changed aircraft on foot before taking a second private plane to Beirut, while his accomplices went across town to Istanbul’s main airport. 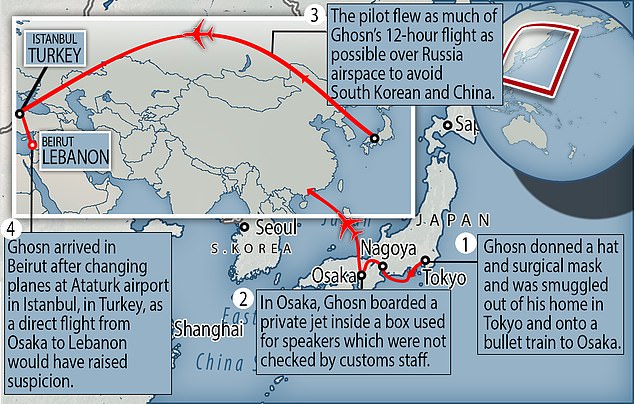 Taylor and Zayek then checked in and went through security, where the CCTV images were taken, before boarding a separate commercial flight to Beirut. 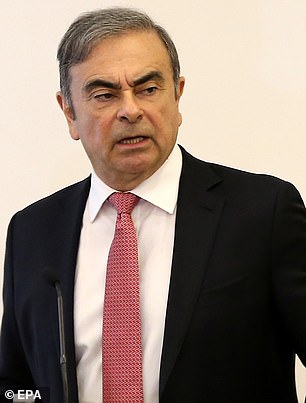 Turkey has arrested five people as part of its investigation into the escape, including employees of MNG, the private jet firm used by Ghosn.

The firm says its aircraft were used illegally in the escape and has filed a criminal complaint.

Turkish police released an image of the music case, used to carry speakers, that Ghosn was said to have been smuggled inside as he made his daring escape bid to Lebanon via Istanbul.

Taylor, who used to be a U.S. Special Forces counter-terrorism specialist, is now a private security contractor who has protected powerful people and companies, as well as secretly helping the U.S. government.

The 59-year-old has previously rescued hostages and is said to be well known in the private security contractor world.

Taylor’s company, American International Security Corp., was once hired by the New York Times to help rescue one of its reporters, David Rohde, after he was kidnapped by the Taliban in Afghanistan.

The reporter was held in Pakistan for seven months before managing to escape himself in 2009.

Taylor also served a 14-month prison sentence in Utah in 2012 after pleading guilty to wire fraud in a multimillion-dollar military fraud scheme.

He was arrested after allegedly calling an FBI agent and asking him to stop a federal investigation into his security company.

Taylor was being investigated over a bid-rigging scheme to get $54 million Defense Department contracts.

Taylor, who denied any wrongdoing and claimed he was a legitimate businessman, took a plea deal.

When he was released from prison in 2015, the government gave him back the $2 million they had seized from him. 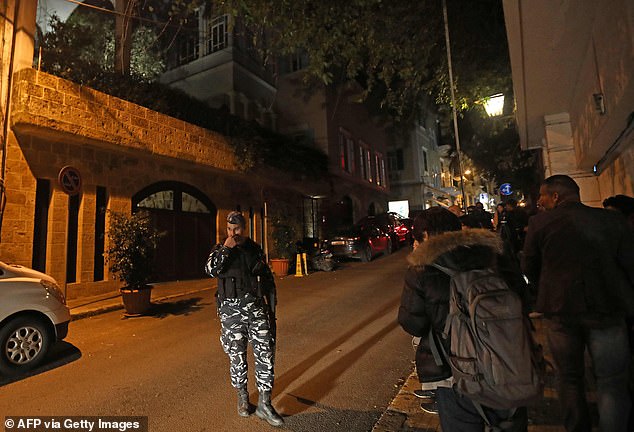 Ghosn is now holed up inside a mansion in Beirut with wife Carole (pictured, security outside) and says he plans to fight for justice from the country

Speaking in an interview in January, Ghosn said he had been approached by Hollywood to make a movie about his dramatic escape from Japan while hidden in a music case.

Speaking in an interview, he suggested a film on his escape is in the works after rumours previously spread of him meeting with Birdman producer John Lesher and working with Netflix.

In an interview with CBS News, Ghosn revealed how closely-guarded details of his escape were and said that he had planned the daring operation himself. 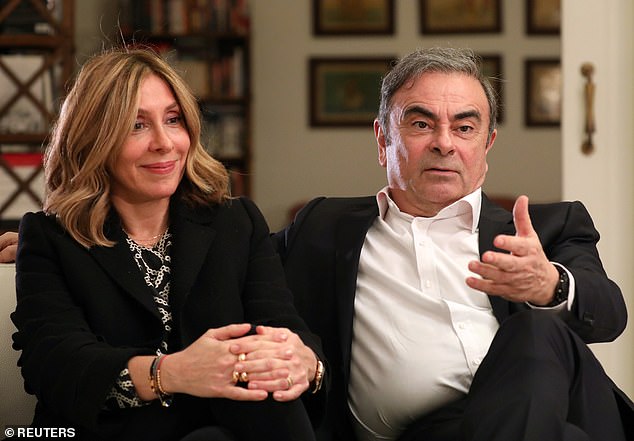 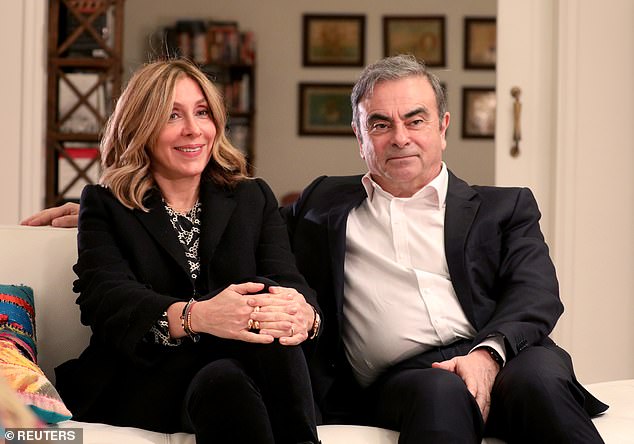 He also refused to comment on the people who helped him escape, adding that he felt no guilt over dodging Japanese authorities and saying his wife had nothing to do with it 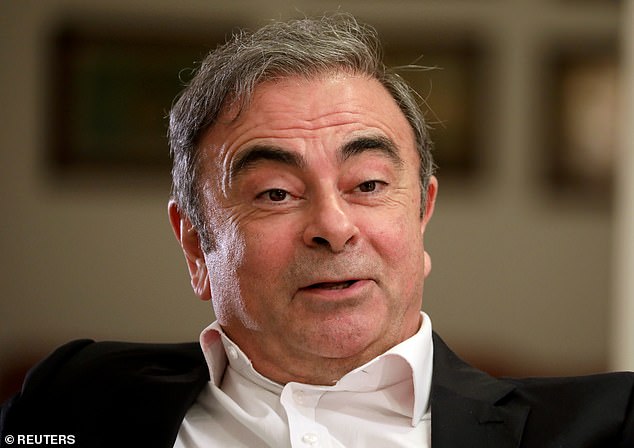 He said: ‘Oh, I knew that I was taking risk. I knew I had to work by myself only with people who are going to operate, you know?’

He also refused to comment on the people who helped him escape, adding that he felt no guilt over dodging Japanese authorities.

‘I don’t feel bad about it, because the way I’ve been treated, and the way I was looking at the system, frankly, I don’t feel any guilt.”

Ghosn claims he fled Japan to escape a ‘brutal and ruthless’ legal system where 99 per cent of cases end in conviction – claims that he repeated at a lengthy press conference last Wednesday.

But he was slammed by the media, officials and even his protege who said that ‘the real reason he ran away is because he was afraid of being found guilty.’

Ex-Nissan CEO Hiroto Saikawa, 66, dismissed his former boss’s claims as Japan’s justice minister said his allegations were ‘baseless’ and urged him to return and fight his case in court.

Mr Saikawa, who rose through the ranks at Nissan under Ghosn’s guidance, added: ‘I feel like I have been betrayed again.’

The country’s media also rounded on him with one commentator saying he can’t be trusted ‘because he fled illegally abroad.’

During an emotional two-hour press conference in Beirut in January, Ghosn claimed a fair trial was impossible under Japan’s justice system and that he was interrogated for eight hours a day without a lawyer.

He also claimed prosecutors threatened to go after his family if he didn’t confess.

Ghosn has been banned from foreign travel by Lebanon after he fled to the country from Japan while awaiting trial for corruption.

Judicial sources in Beirut, where the former Nissan executive is hiding out, said early this year that the ban will be in effect while they investigate whether to put him on trial.

It comes after authorities took 65-year-old Ghosn for questioning over an Interpol ‘red notice’ issued by Japan. 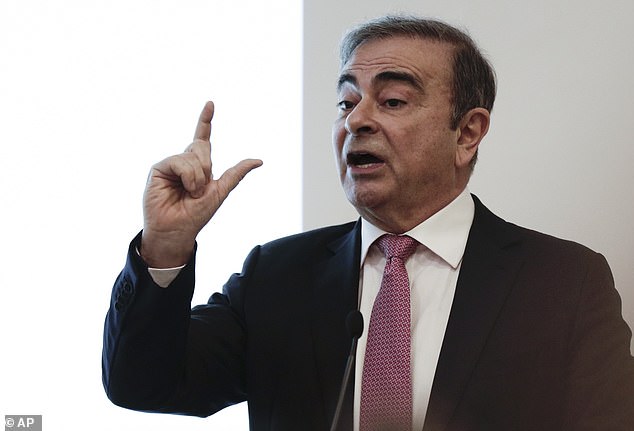 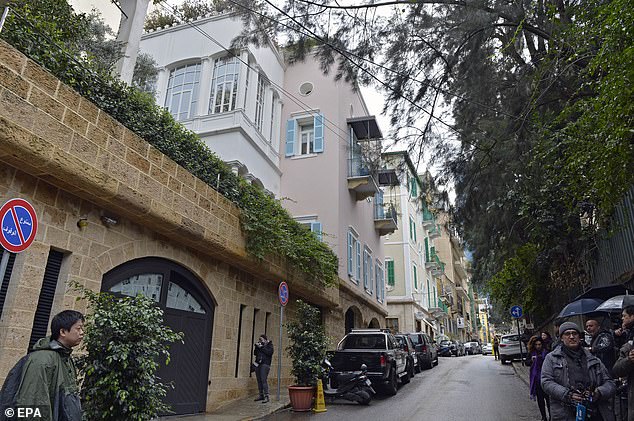 ‘The state prosecution issued a travel ban for Ghosn, and asked for his file from the Japanese authorities,’ a judicial source said at the time.

‘According to what is inside the file, if it appears that the crimes he is accused of in Japan require being pursued in Lebanon, he will be tried.

‘But if it doesn’t require being pursued under Lebanese law, then he will be free.’