Ex-NBA star Ben Gordon who was released on bail in the early this morning, has been re-arrested on a separate case within after hours of his first release.

In the first case, Gordon allegedly repeatedly punched his son in the face when the 11-year-old dropped a book, according to court documents.

He was then re-arrested after it was found he had an outstanding warrant for a 2020 cellphone robbery.

The former Chicago Bulls player was granted bail from Queens Criminal Court on Tuesday night, and released in the early hours of Wednesday before his second arrest came later in the day.

Ex-NBA star Ben Gordon who was released on bail in the early this morning, has been re-arrested, pictured,  on a separate case within after hours of his first release. Gordon is pictured entering Manhattan Central Booking after being released on bail in Queens 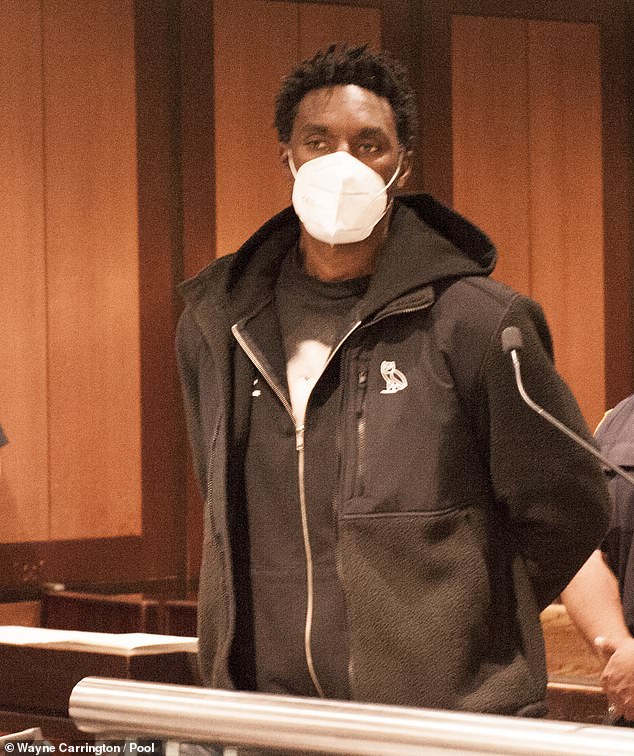 Gordon, 39, was booked for the incident which occurred in March 2020.

At the time, a 19-year-old woman claimed he grabbed her phone and she dropped it as she tried to make a call.

The woman claimed Gordon had elbowed her during the scuffle.

Gordon’s earlier arrest came after he was reported to police by an American Airlines employee who witnessed an alleged assault against his child.

He had been traveling with his son Elijah, 11, to Chicago when the woman saw him punching and shouting at the boy in LaGuardia Airport on Monday night.

Gordon allegedly resisted when Port Authority officers tried to arrest him and reportedly ‘flailed his arms and twisted his body’ .

He is accused of pushing his weight against the two officers and injuring  one of their knees and the others arm and wrist.

Both officers were taken to hospital, with Gordon shouting at them ‘I am not going with you guys,’ according to the New York Post. 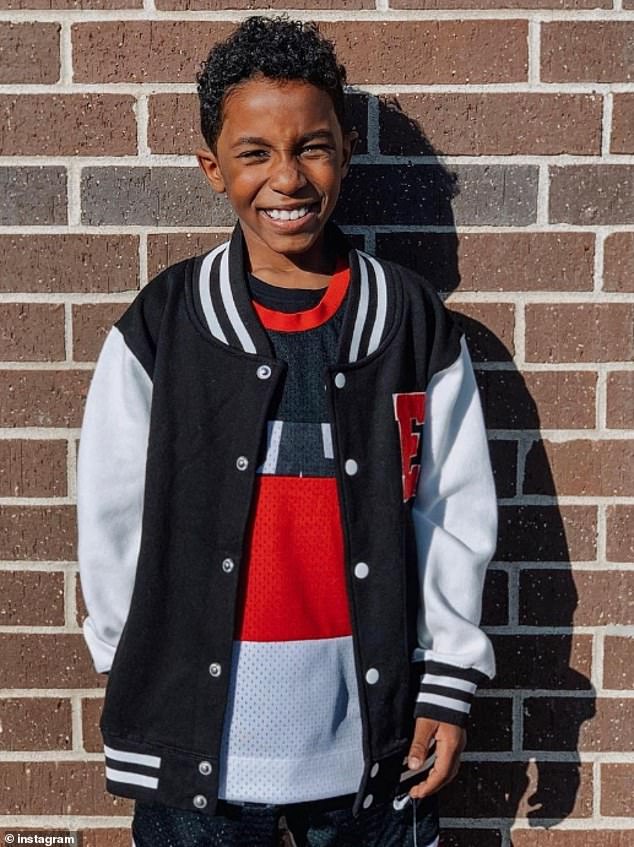 He is accused of punching his 11-year-old son Elijah, pictured, so hard that he was rushed to the hospital by his aunt. Gordon shares the child with ex-fiancé Sascha Smith 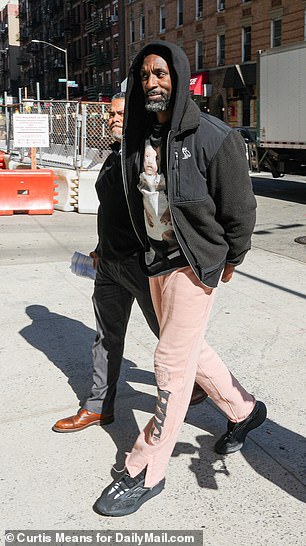 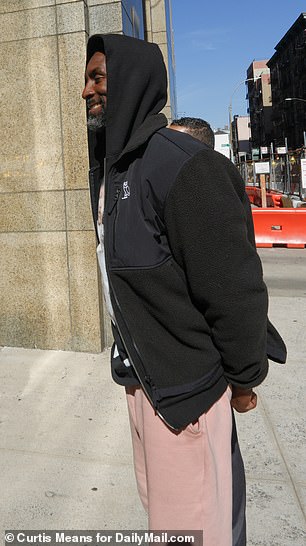 His son, who he shares with his ex-fiancé Sascha Smith, 32,  has an order of protection out against his father dating back to May 2018.

The order, which was issued in Illinois, prohibits Gordon from removing his son from the state was well as ‘committing physical abuse, harassment, or the interference with personal liberty’ against his son.

His ex-girlfriend and stepmom to Elijah, Ashley Banks, denied he hit his son and blamed a ‘kiosk Karen’ for calling security when he only reprimanded the child.

She who dated the former Chicago Bulls star until 2020, and claims the athlete had been doing push ups with Elijah when guards swooped and he was arrested. 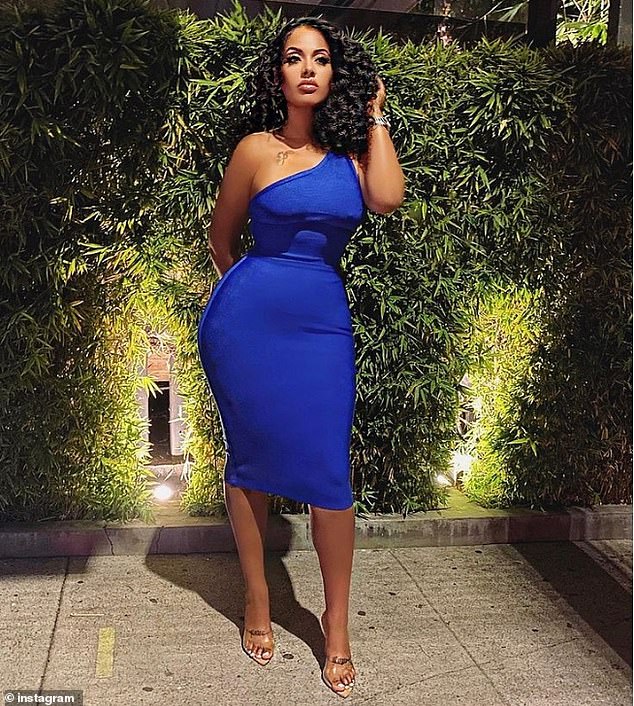 Gordon’s ex-girlfriend Ashley Banks, pictured, claims that the athlete is ‘misunderstood’ and was ‘triggered’ by an ‘airport Karen’ 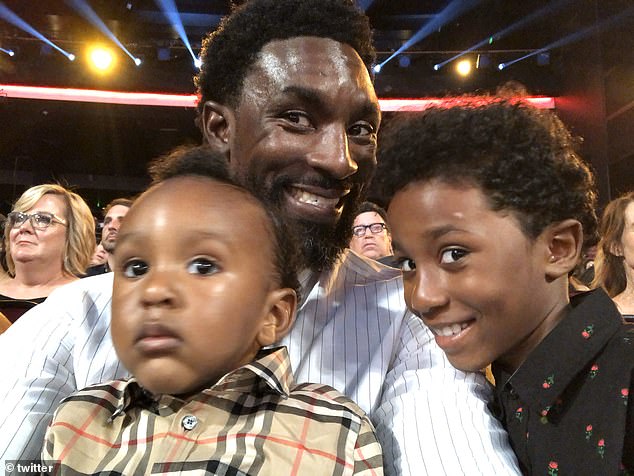 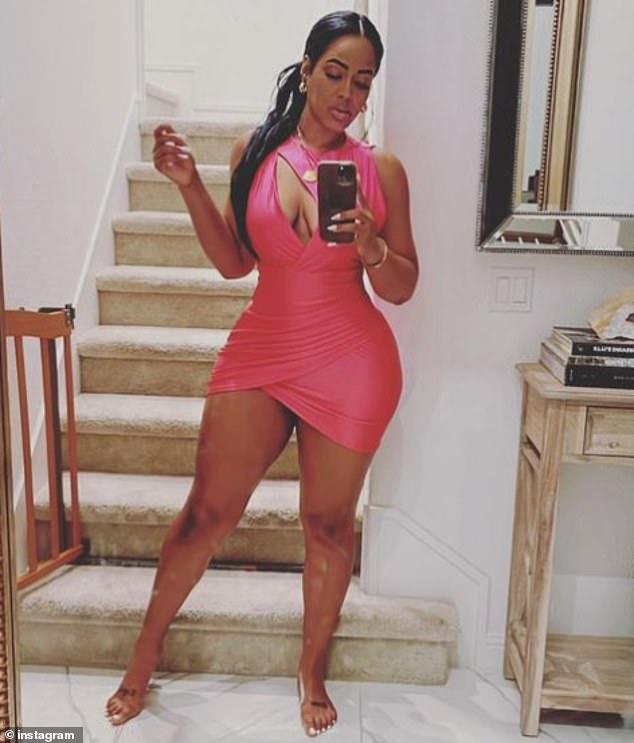 Banks confirmed that she had previously had a restraining order against Gordon when he was struggling with his mental health, but the two now co-parent their son Lux together 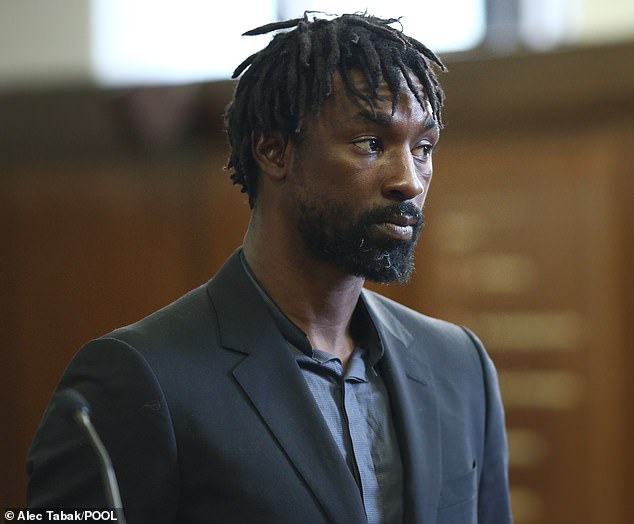 Ben Gordon is pictured in March 2018 at a court hearing in Manhattan, charged with driving with a fake license plate

Banks, who shares son Lux with Gordon, told DailyMail.com: ‘Someone was being nosy. It was the kiosk lady. She was just being a Karen. They got security and he was triggered because he was with his son.

‘My son’s father would never put his hands on his children. He lives and breathes air for his three boys. It was the case of the airport Karen triggering another black man. She should be fired. He was just very upset.

‘His son was not hurt, he wasn’t bruised and is with his aunt. The lady was starting with them and called security and he was getting upset. The child is fine.’

Gordon has previously admitted struggling with his mental health, writing an essay on the The Player’s Tribune in 2020 detailing his struggles with bipolar and mania – saying it was ‘terrifying’.

He said he was admitted to a mental hospital, and ‘didn’t even understand why it was happening’, explaining he lost his ‘career, identity and family pretty much simultaneously.’ 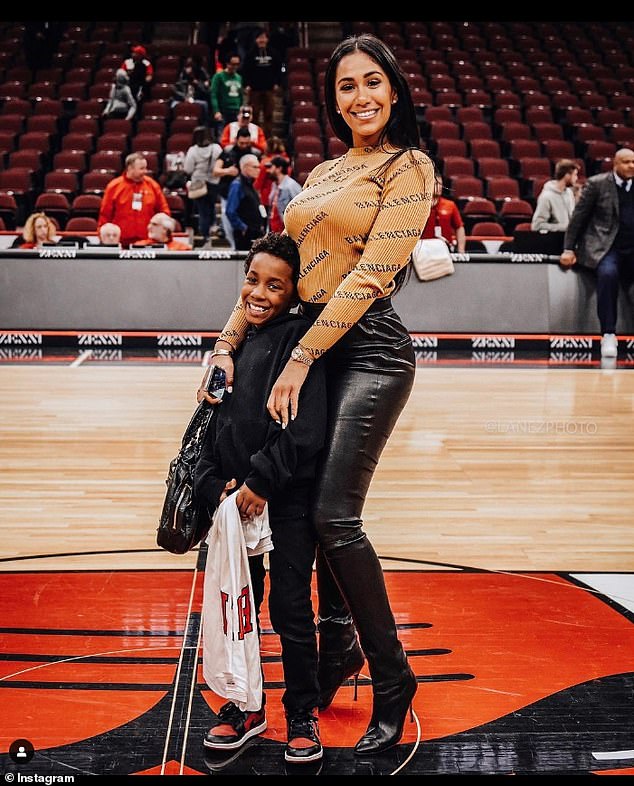 Sascha Smith, pictured with Elijah, is the mother of the 11-year-old who Gordon is accused of punching. It is understood that she currently lives in Chicago 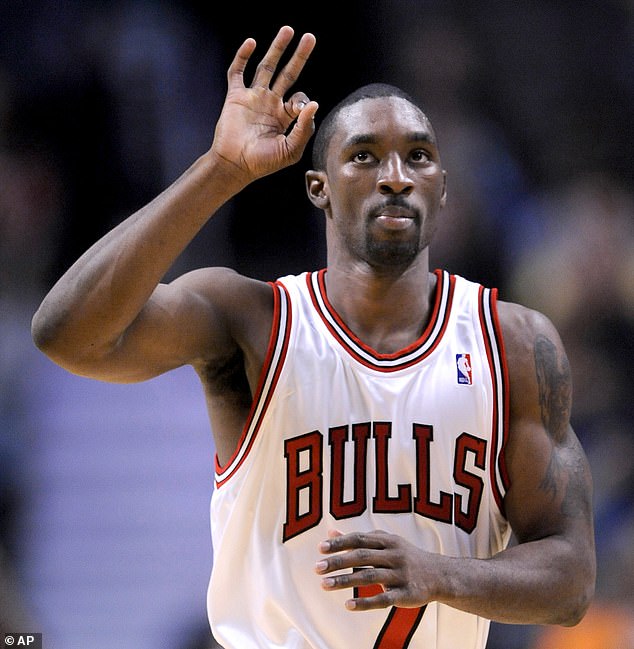 Gordon retired in 2015, and has been open about his mental health struggles in the years since

The arrest is the latest in a string of clashes with the law for the troubled star, who played with the Chicago Bulls from 2004 to 2009 before joining the Detroit Pistons.

Gordon won the Sixth Man Award in 2005 as a rookie with the Bulls, and played alongside Luol Deng – earning an estimated $84 million during his NBA career.

He played with the Charlotte Bobcats for two seasons, and ended his career with the Orlando Magic in 2015.

In June 2017 he was arrested for pulling the fire alarms at his Los Angeles apartment complex despite there being no blaze, going into ‘meltdown mode’ after getting locked out,

Both the LAPD and the City Fire Department responded, and he was arrested on a misdemeanor charge of falsely activating a fire alarm.

He then failed to appear in court at his arraignment for the fiasco, before being arrested again in October 2017. 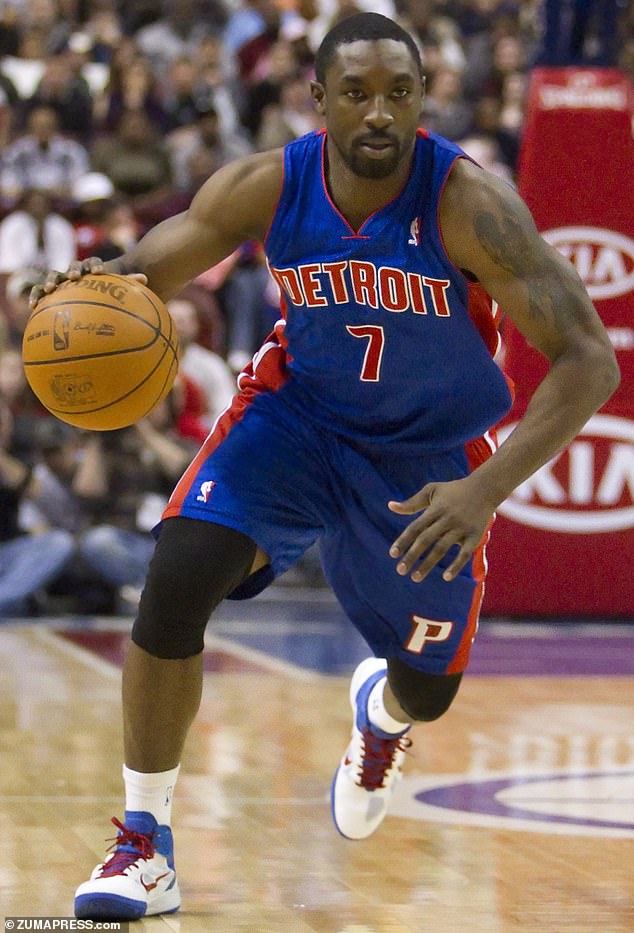 The sporting star is pictured in April 2011, while he was signed with the Detroit Pistons 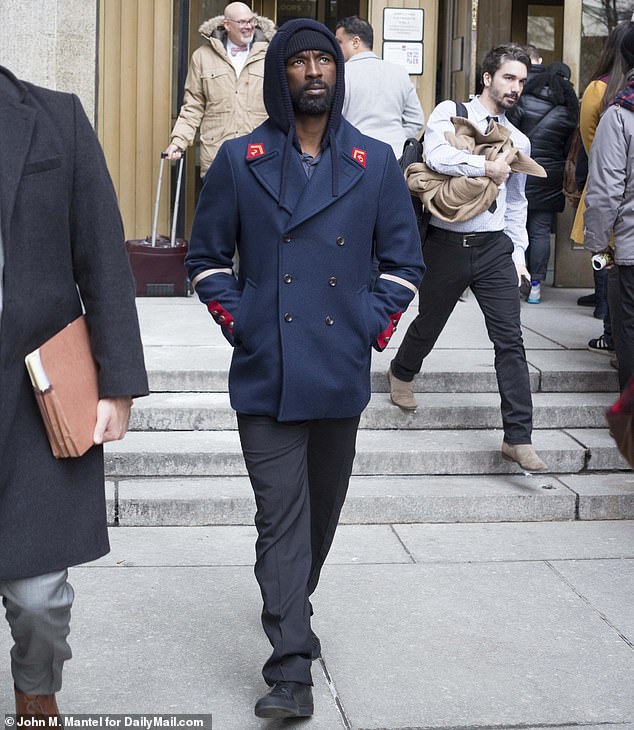 A distraught woman claimed that she had been in a confrontation with Gordon and was locked in the store after demanding that she leave.

Gordon was arrested by officers at the Of Our Own store in Mount Vernon, after they found him hiding in the bathroom and they transported him to a hospital.

In November 2017 the athlete was arrested during a car stop in Manhattan for driving with a forged license place, with a judge issuing a warrant for his arrest months later when he again failed to show up to court.

He was then arrested in Los Angeles weeks later after allegedly assaulting his formed apartment building manager and threatening him with a knife.

Gordon had reportedly attempted to get back a security deposit he owned, before punching the manager in the face.

The man handed him a portion of the deposit, before Gordan returned to the scene with a knife and demanded the rest of the cash. He was then taken into custody without incident on robbery charges.

The Port Authority police department have not commented on Gordon’s arrest.