By Harry Cole For The Mail On Sunday

It is a well-trodden path for ex-Chancellors to cash in and take plum City jobs, but Philip Hammond is giving his predecessors a run for their money.

It’s a partnership in private equity firm Buckthorn Partners, chaired by his friend and fellow former Minister Colin Moynihan. It is said Hammond ‘brings his long-standing business experience drawn from his work in energy, manufacturing and healthcare’.

Pictured in 2017, then-Chancellor of the Exchequer Phillip Hammond leaves a Brexit Cabinet meeting with then-Foreign Secretary Boris Johnson, now the UK’s Prime Minister. Hammond is now on his fourth job since leaving government

However, I was surprised to see such a champion of female empowerment happy to join a nine-strong, all-male team. Under Hammond’s leadership, the Treasury urged bosses in the Square Mile to sign up to the Women In Finance Charter, which ‘commits firms to supporting the progression of women into senior roles’.

Buckthorn invests in oilfield and energy companies, and is the second firm Hammond, a one-time second-hand car salesman, has worked for with key connections to Saudi Arabia.

As Foreign Secretary, he was criticised by human rights groups for ‘parroting Saudi propaganda’.

I hear other major job offers in the oil-rich kingdom could be in the pipeline, so to speak.

Chancellor Rishi Sunak has been enjoying his nickname ‘Dishy Rishi’, but colleagues fear the glowing headlines will not last. Warning of sweeping cuts to come to pay for the billions spent to fight coronavirus, ‘he’ll soon be “Slashy Sunak” or “Rishi Prune-back”,’ says one Minister.

While the Prime Minister was isolating himself inside the No 11 flat, dutiful Downing Street cat Larry, pictured left, kept vigil by his door.

‘Larry could tell something was up,’ says one of his minders.

Thankfully for the Mouser in Chief, the sprawling and interconnecting corridors of power between No 10 and No 11 have since been reopened and he is back to doing what he does best: sitting in the warm spots… and not catching mice. 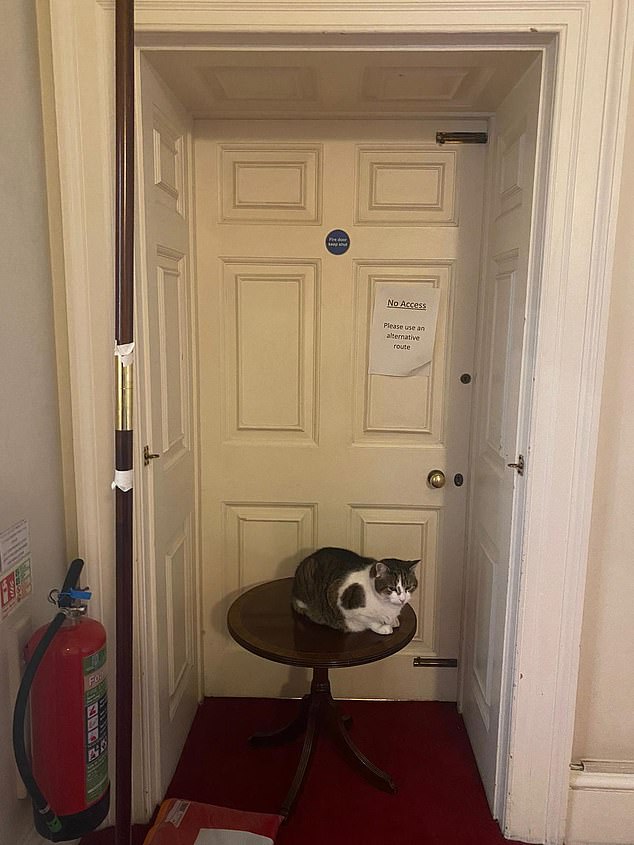 Larry the Downing Street cat guards the door to Boris Johnson’s door, pictured when the Prime Minister was self isolating with symptoms of the coronavirus

Dopey supporters of Tommy Corbyn’s rocky business venture the National Hemp Service, which cynically trades off the NHS’s name, will be pleased to hear he’s battling through the economic downturn. The 25-year-old son of the ex-Labour leader, who was seen clapping the real NHS with his father last week, is telling customers to stay ‘inside and have hemp delivered to your door’ in these dark times. Customers should beware, however, that its boasted calming and health-giving effects are not backed by medical evidence.

‘Beware the Ides of March,’ Caesar was told – and in view of his role in toppling Theresa May last year, Sir Iain Duncan Smith knows a thing or two about Shakespearean betrayal. I couldn’t help being amused by his user name on the popular video-calling app Houseparty – ‘idsofmarch’.

A decade has passed since the then Labour Treasury Chief Secretary Liam Byrne shamefully penned his infamous ‘there’s no money left’ note to his successor in the Coalition, securing his place in the history books for all the wrong reasons. But it seems bungling Byrne is still having trouble with the figures. The Birmingham MP is under investigation by the parliamentary expenses watchdog IPSA. But thanks to secretive rules, we are not told if he’s been overspending again.