Global income has historically often been overlooked by investors, but in recent months it has become an increasingly attractive proposition.

With global dividends surging to a record high last year, global income funds can offer investors with even more high-yielding companies to choose from.

In the past six months the IA Global sector has returned 5.6 per cent and over five years 35.3 per cent.

Evenlode Global Income is one such fund but it is unusual in that nearly a fifth of its portfolio is made up of UK companies.

Even more unusually, unlike lots of income-focused funds, Evenlode Global Income chooses not to invest in energy stocks which have been popular for income seekers.

Instead, consumer staples make up the bulk of Evenlode’s portfolio with a 27.9 per cent allocation, followed by healthcare at 20 per cent and industrials at 18.3 per cent.

Since the fund’s launch five years, it has outperformed the IA sector but in the last year has struggled because of its lack of exposure to energy stocks.

It has meant fund manager Ben Peters has had to reassess some of the fund’s holdings in the face of the Ukraine invasion, soaring inflation and volatility within the tech sector.

Where does Evenlode Global Income invest?

The decision not to invest in energy stocks might not chime with those looking for income, given oil majors have historically been reliable in paying out dividends.

But rather than taking a sector by sector basis, Evenlode picks asset-light companies across its three strategies – UK income, global income and global equity.

‘We’re looking for companies that can grow, but with a relatively limited need for capital, reinvestment in the business, to drive growth,’ fund manager Ben Peters tells This Is Money.

‘We’re as interested in the capability of a company to grow its dividend and to invest through time as we are in whatever the headline yield is.’

The historic yield on the global income fund is around 2.3 per cent, although Peters says ‘there is some growth coming through’.

Instead, Peters says his main focus is on companies ‘that produce goods and services that people buy based on the value that they get first, and then think about what the price they’re paying is a second consideration.’

Pricing power has proven to be a crucial driver of performance among defensive stocks over the past year, as they can pass on higher costs to customers without risking a fall in demand.

The fund has benefited from its strong holdings in the consumer goods and healthcare sectors, including Unilever, Nestle and Medtronic.

It also holds a handful of companies within the communication services sector, with a focus on business-to-business media, including Dutch company Wolters Kluwer and RELX which feature in the fund’s top 20 holdings.

Over the past five years, Wolters has soared 132 per cent while RELX’s shares have grown a modest 24 per cent.

The focus on asset-light businesses, as Peters puts it, means the fund dodges commodities because ‘the company doesn’t have a say on the price it charges… the customer is looking to get market price and, if they can, a bit better.’

‘If we look at oil and gas producers, they tend to be asset intensive and have to take the price the market gives them. Over the last year it’s been very good… but if you go back to the start of the pandemic the price of oil was negative for a brief period of time.

‘The point isn’t whether you can or can’t make money investing in these sectors, because clearly you can… but for our process, they don’t tick the box.’ 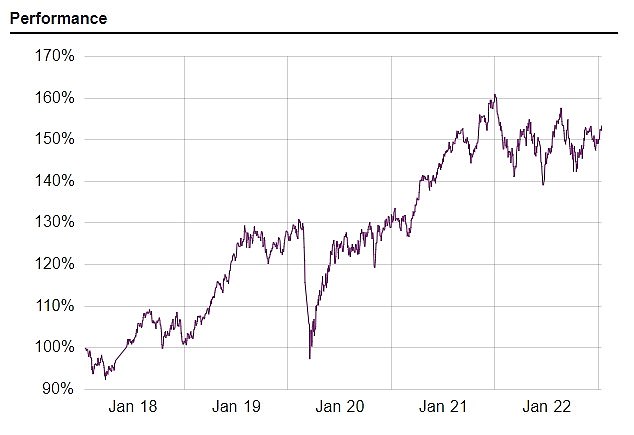 Why has there been so much portfolio turnover?

Given the ongoing volatility and choppy performance in the sectors it invests in, there has been a higher level of portfolio turnover since the pandemic.

Sometimes it’s because the fund realises a company no longer works within the portfolio, says Peters.

He points to money transfer service Western Union, where the competitive landscape had changed with the launch of services like Wise.

‘We do reassess companies and we do sometimes decide that they don’t fit the bill anymore. That doesn’t happen very often, but it does happen.’

My investments were hammered: Here’s my plan to get back 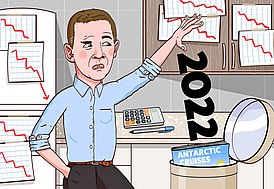 Tony Hazell has been investing for more than 30 years and says 2022 will go down as one of the most unremittingly miserable years he can recall.

The pain was intensified because, being at retirement age, he had far more invested than in some previous stock market downturns such as 2008 and the early 2000s.

He reveals his investment disasters and what he is doing to get back on track.

> TONY HAZELL: How I’m getting my retirement pot back on track

More often than not, however, it’s because the relative valuation of a holding changes.

Where average portfolio turnover had been in the mid to high teens, through the pandemic there were at times 30 per cent turnover.

‘We value businesses over a long period of time… the turnover we see in the portfolio is a function of where we see relative valuation changing in the most part,’ says Peters.

‘I think it’s important for us stock pickers and fund managers to be humble and understand that we can’t possibly get everything right.

‘We can’t possibly know everything and we should be at liberty to change our minds about a company if we’ve got a new information or if we’ve reassessed the company’s business prospects.

‘We call it nudging the portfolio. We don’t tend to make radical changes on a week by week basis, but over time we’re happy to make incremental changes that can add up to something quite different.’

Evenlode Global reduced its technology exposure as valuations became stretched during the pandemic although on a company-by-company basis rather than as a macro-sector call.

In the past year, however, it started to reverse the process adding to its existing holdings like Microsoft and Accenture.

Microsoft is now the fund’s second largest holding having fallen off heavily over the past year.

While the share price is down 25 per cent over the past year, Peters highlights Microsoft’s growing cloud business as an indicator of growth over the longer term.

‘Are people going to want more or less cloud services in the future? My guess would be yes. And are they going to use Microsoft as one of the three big players in our market, the other ones being Amazon Web Services and Google? I would imagine that a lot will choose Microsoft and indeed AR.

‘We obviously don’t have a crystal ball any better than anybody else. But I think that over that sort of time timeframe the prospects for Microsoft are very good.’