Eva Mendes and Ryan Gosling are enjoying a family vacation on the small Greek island of Antiparos, which occupies an area of only about 17 miles.

The Hollywood couple, who have been known to keep a low profile and keep their personal lives private, have been spotted taking casual strolls with their two daughters Esmeralda, seven, and Amada, six, according to the Greek Reporter.

On Friday, during a break from all the sight-seeing, Mendes took to her Instagram page and shared a holiday photo of herself soaking up the sun near their abode.

Family holiday in the sun: Eva Mendes, 48, shared a photo of herself soaking in the sun and the culture while on a family holiday on the small Greek island of Antiparos with longtime partner Ryan Gosling and their two daughters

In the photo, the Training Day actress posed on some outdoor steps in a red and white-patterned shirt dress that she left open to reveal a green top.

She also wore a pair of brown sandals, along with stylish, large-frame sunglasses and a red-patterned scarf, which helped keep her long tresses off of her face.

Mendes shared some deets about her effortless vacation look in the caption of her post, specifically her accessories.

‘Adoro [I adore] these light summer jewelry pieces I found,’ began the star, who noted the pieces were from the brand Neola Design. 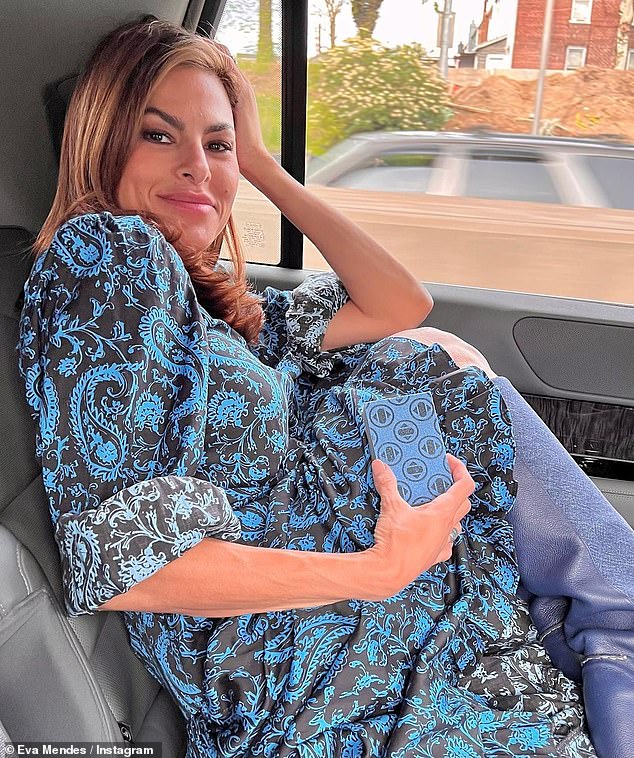 Hands-on parent: The actress went on hiatus from her acting career to be a hands-on mom in 2013; she is pictured four days ago 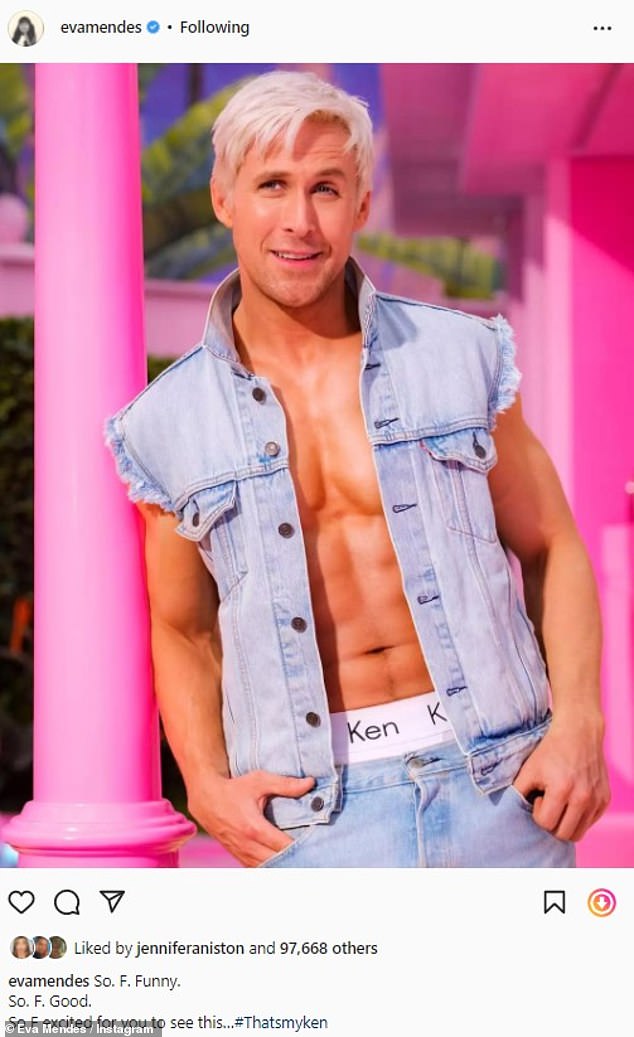 All dolled up: Mendes couldn’t resist joking and gushing over her longtime partner all dolled up as Ken Doll for the upcoming live-action film Barbie

The couple were spotted this week taking an evening walk with their girls, which was caught on camera by Mykonos TV. Mendes and Gosling can be seen holding hands as they make their way past a stretch of shoppes and businesses with their girls by their sides.

At one point, a man sitting at a table noticed the two stars and appeared to say hello along with friendly head nod to Gosling , which the Notebook actor reciprocated with a head nod of his own.

The longtime leading man, 41, is still sporting platinum blonde hair, which he dyed for his latest role as Ken in the upcoming movie Barbie, that’s based on the eponymous toyline by Mattel, and stars Australian actress Margot Robbie as the titular character. 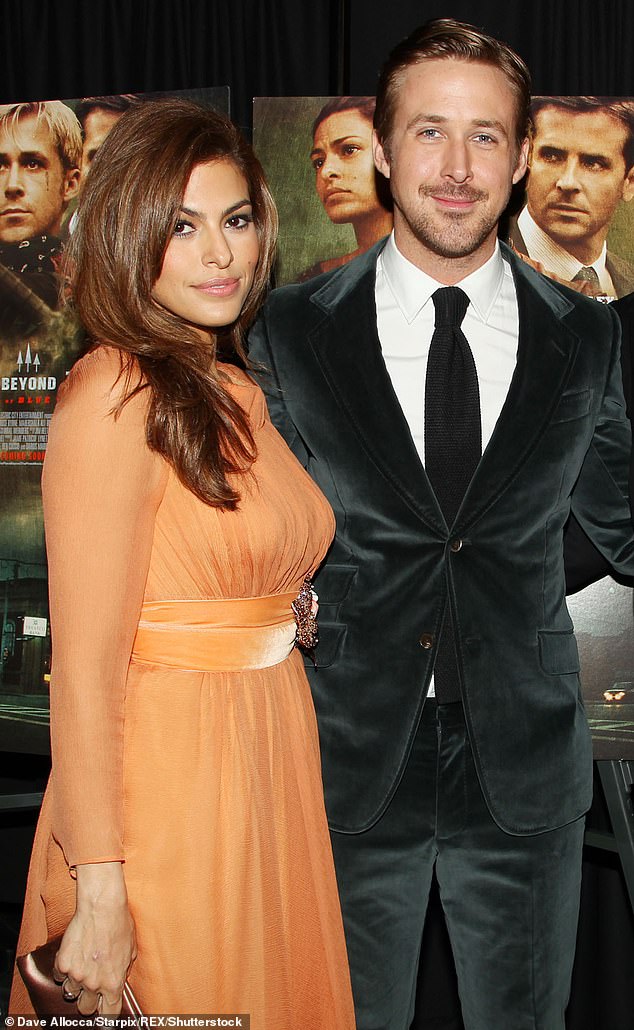 Item: Mendes and Gosling have been an item since around the time they starred together in the crime drama film The Place Beyond the Pines, which was shot in the summer of 2011; they are pictured at the film’s premiere in March 2013

Just two days earlier, Mendes couldn’t resist taking a fun jab at her longtime partner by posting a photo of him all made up as Ken, complete with a deep orange tan and ripped abs that peeked out from behind a denim vest.

Mendes, 48, opted to go on hiatus from her Hollywood career in order to be hands-on parent to raise their two daughters. Her last credited film role was in the fantasy thriller film Lost River, which was written and directed by Gosling and shot in 2013.

She did do a voice role for an episode of the Australian preschool animated series Bluey in 2021.

Fans will get to see Gosling all dolled up as Ken when Barbie premieres in theaters in the U.S. on July 21, 2023. 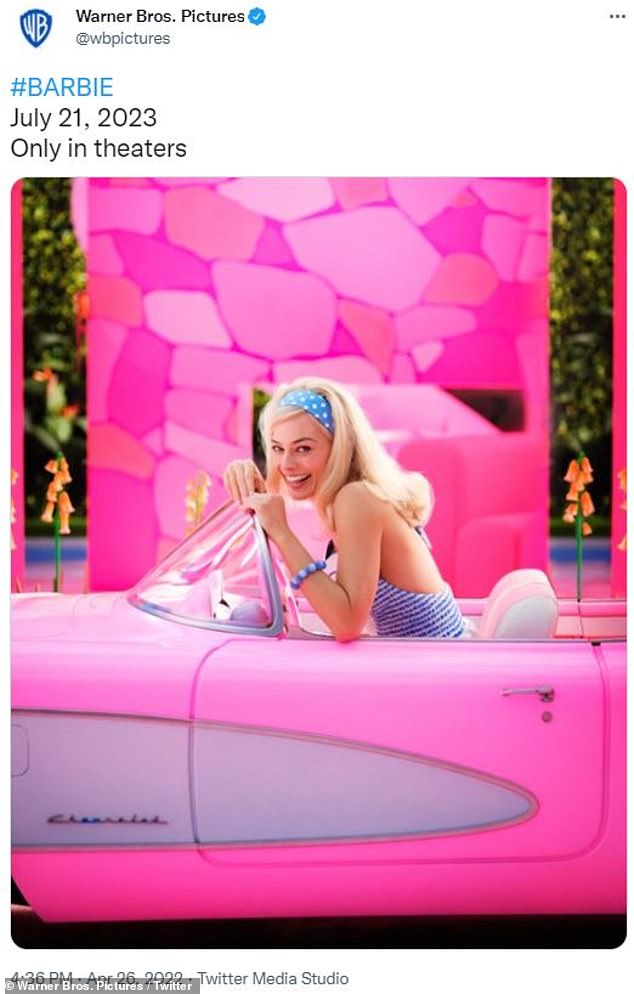 Coming next summer: Fans will get to see Gosling all dolled up as Ken and Margot Robbie as Barbie when the live-action film Barbie premieres in theaters in the U.S. on July 21, 2023