Europe needs to dramatically increase recycling of metals used in electric cars and renewable energy sources if it wants to meet its target of becoming ‘carbon neutral’ by 2050, a new study claims.

The study by Belgian university KU Leuven found that meeting the EU’s ‘Green Deal’ goal will require 35 times more lithium and up to 26 times the amount of increasingly scarce rare earth metals compared with what Europe uses today.

These metals are essential to Europe’s plans for producing the electric vehicles and batteries, renewable wind, solar and hydrogen energy technologies, and the grid infrastructure needed to achieve climate neutrality.

However, the EU still relies on imports from Russia, China and Indonesia for much of the metal needed, and the study warns ‘there is growing concern about the security of supply’.

‘Europe needs to decide urgently how it will bridge its looming supply gap for primary metals. Without a decisive strategy, it risks new dependencies on unsustainable suppliers,’ said lead author Liesbet Gregoir. 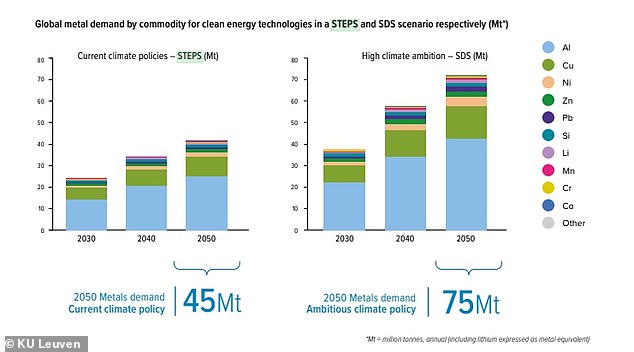 The study says that by 2050, Europe’s plans for producing clean energy technologies will require annually:

The 27-nation EU aims to be ‘carbon neutral’ by 2050 – reducing greenhouse gases to a level where the amount produced is balanced out by the amount removed from the atmosphere.

The bloc also wants to wean itself off dependence on Russian oil, coal and gas by increasing the amount of energy generated domestically from renewable resources.

Europe currently imports most of its aluminium, nickel and copper from Russia, which is currently embroiled in a deadly war with Ukraine.

Meanwhile, China and Indonesia, which rely on coal power for metal production, are expected to dominate global markets for battery metals and rare earths.

If it is to meet climate and social goals, Europe will need to find external suppliers with better environmental and rights records, the report said.

If, on the other hand, it wants to become less reliant on external sources, Europe will need to open new mineral ore mines and refineries.

There is ‘theoretical potential’ for new mines to provide between five and 55 percent of the continent’s raw metal needs, the report said.

But projects need to get going now if they are to be operational in time.

Meanwhile, investments in refining are being stymied by Europe’s energy crisis and soaring fuel prices. 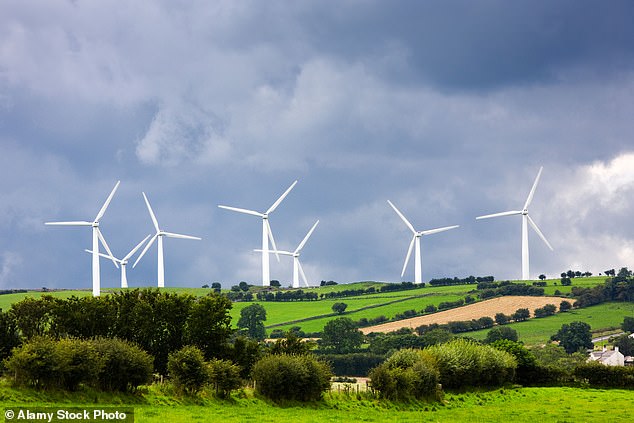 The EU wants to wean itself off dependence on Russian oil, coal and gas by increasing the amount of energy generated domestically from renewable resources

The study concludes that ‘recycling is Europe’s best chance to improve its long-term self-sufficiency’, noting metals recycling saves between 35% and 95% of the CO2 compared with primary metals production.

It claims that Europe could be self-sufficient for 40 to 75 percent of its clean energy metal needs by 2050 if it invests heavily now in recycling infrastructure and cuts red tape.

Locally recycled metals could produce ‘three-quarters of Europe-made battery cathodes, all its plans for permanent magnets production and significant volumes of aluminium and copper’.

‘It’s a step-up that our clean energy system will be based on permanent metals which can be recycled indefinitely, compared with today’s constant burning of fossil fuels.’

However, it warns that the bloc ‘must act strongly now to raise recycling rates, invest in the necessary infrastructure, and overcome key economic bottlenecks’.

Recycling ‘will not provide a viable EU supply source to Europe’s electric vehicle batteries and renewable energy technologies until after 2040, however,’ the study clarifies.

‘These applications and their metals are only just being put on the market and will not be available for recycling for the next 10-15 years.’

‘We are on a fast track to climate disaster’: Damning UN report warns greenhouse gas emissions must peak by 2025 at the LATEST to limit global warming to 2.7°F

The UN Intergovernmental Panel on Climate Change (IPCC) report claims that there is a ‘brief and rapidly closing window of opportunity’ to limit warming by 2100.

Carbon dioxide (CO2) emissions must be slashed by a whopping 48 per cent by 2030 and hit net zero by 2050 if we’re to hit the target, according to the report.

‘We are at a crossroads. The decisions we make now can secure a liveable future. We have the tools and know-how required to limit warming,’ said IPCC Chair Hoesung Lee.

UN secretary-general Antonio Guterres described the report as a ‘file of shame’, and warned we are on a ‘fast track to climate disaster’.