EU watchdog accuses Ursula von der Leyen of ‘maladministration’ and orders her to hand over secret texts she sent to Pfizer’s CEO during efforts to buy 1.8billion Covid jabs

The EU ombudsman, Emily O’Reilly, issued a formal recommendation telling von der Leyen’s office to search for and hand over the texts under a freedom of information request lodged by a journalist.

The European Commission chief used ‘personal diplomacy’ to secure the deal for 1.8billion Pfizer vaccines via texts with the CEO, the paper revealed.

Journalist Alexander Fanta of news site netzpolitik.org then asked the Commission for access to the text messages and other documents, but the executive branch did not provide them.

The commission rebuffed the freedom-of-information request, refusing to say whether the texts existed – even though von der Leyen had referred to them herself in a media interview.

According to the ombudsman’s inquiry, the Commission did not clearly ask von der Leyen’s cabinet to look for the text messages.

Instead, the Commission said the only information they had was an email, a letter and a press release.

‘This falls short of reasonable expectations of transparency and administrative standards in the Commission,’ O’Reilly said.

‘When it comes to the right of public access to EU documents, it is the content of the document that matters and not the device or form. If text messages concern EU policies and decisions, they should be treated as EU documents.

The ombudsman said the commission should ask von der Leyen’s office to again look for the texts, and if it found them, ‘the Commission should assess whether public access can be granted to them’ in line with EU rules.

‘The EU administration needs to update its document recording practices to reflect this reality.’ 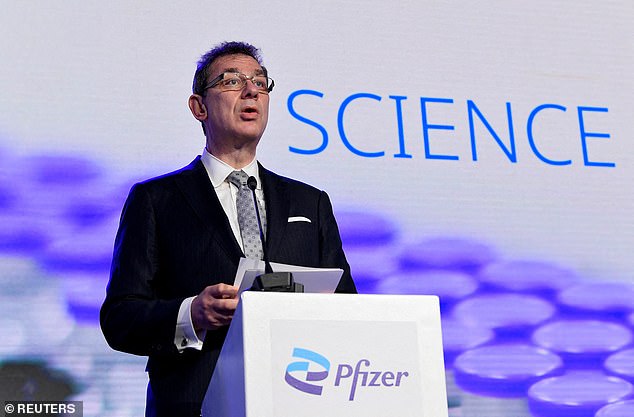 They also told the ombudsman that ‘to date, it has not recorded any text messages in its document management system’.

But O’Reilly rejected this argument, saying that texts fall within the Commission’s definition of a document.

More than half the doses the commission has bought or optioned are sourced from BioNTech-Pfizer, making it by far the biggest supplier to the bloc’s inoculation efforts.

The commission refuses to divulge key aspects of its contracts with Covid vaccine suppliers, notably on pricing, citing commercial confidentiality.

Last year, there was a mad scramble to secure vaccines, with the EU and the UK coming to blows over contracts with the major pharmaceutical companies.

While Britain was able to get on top of their world-beating vaccine rollout and administer 20 million jabs within a few weeks of the Pfizer and AstraZeneca vaccines being approved, EU leaders lagged behind in implementing a vaccine plan.

Brussels chiefs were furious at AstraZeneca for promising the UK first deliveries of its vaccine supplies, claiming it has reneged on its deal with the bloc.

Countries such as France and Germany then went back-and-forth about whether to rollout the AstraZeneca jab, which sowed doubts among the public and led to a low uptake of the vaccines.