Ursula von der Leyen today announced the European Union is launching legal action against the UK over Boris Johnson’s plans to tear up parts of the Brexit divorce deal.

Brussels had given Downing Street until the end of September to scrap the Prime Minister’s controversial proposals which are contained within the UK Internal Market Bill.

But the UK Government refused to budge and Ms von der Leyen said this morning that as a result the bloc has now started legal proceedings.

It has sent a ‘letter of formal notice’ to Number 10 which is the first step in the so-called ‘infringement procedure’.

Speaking in Brussels she said: ‘This draft Bill is by its very nature a breach of the obligation of good faith laid down in the Withdrawal Agreement.

‘More over if adopted as is it will be in full contradiction to the protocol of Ireland/Northern Ireland.

‘The deadline lapsed yesterday. The problematic provisions have not been removed.

‘Therefore this morning the Commission has decided to send the letter of formal notice to the UK Government. This is the first step in an infringement procedure.

‘The letter invites the UK Government to send its observations within a month and besides this the Commission will continue to work hard towards a full and timely implementation of the Withdrawal Agreement. We stand by our commitments.’

Downing Street said it ‘will respond to the letter in due course’ as it defended the approach it has taken.

‘We have clearly set out our reasons for introducing the measures related to the Northern Ireland Protocol,’ a Government spokesman said.

‘We need to create a legal safety net to protect the integrity of the UK’s internal market, ensure Ministers can always deliver on their obligations to Northern Ireland and protect the gains from the peace process.’

The escalation of the row risks souring the atmosphere of trade talks which remain ongoing between Brussels and Britain after optimism had grown in recent days that a deal could be done in the coming weeks after months of deadlock. 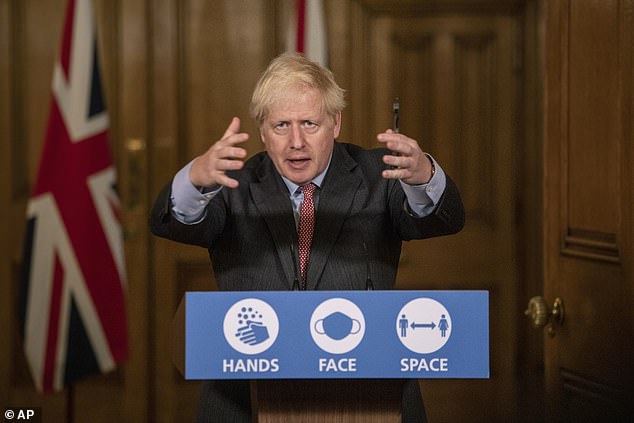 Downing Street said Mr Johnson, pictured yesterday, and the Government will respond to the EU’s letter of formal notice ‘in due course’

How does the EU’s legal action actually work and how could the UK be punished?

Brussels has the power to take legal action against any member state which is not respecting its obligations under EU law.

The process starts with the bloc issuing a ‘letter of formal notice’ which effectively asks the offending country to set out its position.

If the EU is not satisfied with the response it can then issue a ‘reasoned opinion’ which amounts to a formal demand to comply with the law.

The overwhelming majority of cases – some 95 per cent –  are settled before they are referred to the court.

However, if the disagreement does make it to the court and it rules against the country then it is legally required to ‘take the necessary measures to comply with the judgement’.

If there is a continued refusal to comply then the Commission can propose that the court impose financial penalties against the offending country.

It is the court that ultimately decides the size of any financial penalties.

Infringement proceedings take a long time to progress and are a relatively common tool used by the European Commission.

There were around 800 open cases against member states last year alone.

The UK remains subject to EU law and the bloc’s infringement procedure during the Brexit transition period which is due to end in December.

The latest row with the EU was sparked by the publication of the Government’s UK Internal Market Bill last month.

The legislation, which is currently making its way through Parliament, will enable the UK to unilaterally make decisions on key issues, like customs arrangements between mainland Britain and Northern Ireland, contained within the Withdrawal Agreement.

But Brussels is adamant that the decisions must be made by a joint committee made up of people from both sides – a process set out in the divorce accord signed by Mr Johnson in January.

The Government has admitted its proposals will break international law ‘in a very specific and limited way’.

But it insists they are necessary in order to protect the integrity of the UK and to prevent chaos if the two sides are unable to agree terms by the end of the transition period in December.

The plans prompted fury at home and abroad as Mr Johnson faced condemnation from his own MPs, his political opponents and the EU.

Despite the widespread disquiet over the plans the Government has pressed ahead with them and earlier this week the Bill cleared its final stage in the House of Commons.

MPs backed the legislation by 340 votes to 256 and it is now set to move to the House of Lords for further scrutiny.

The Government was able to see off a potential Tory rebellion after it gave into demands to hand MPs a so-called ‘parliamentary lock’ on the use of the powers.

That means that if ministers ever want to depart from the Withdrawal Agreement they will have to ask Parliament for permission first in the form of a formal vote.

EU chief negotiator Michel Barnier made clear after Ms von der Leyen’s announcement that the bloc will not accept the UK trying to depart from any of the terms agreed to in the divorce accord.

He tweeted: ‘Full & effective implementation of Withdrawal Agreement will always be an absolute priority for the EU.

‘It is the result of long EU-UK negotiations & the only way to protect Good Friday (Belfast) Agreement, guaranteeing peace and stability on island of Ireland.’

Labour said both Britain and Brussels needed to ‘drop the posturing’ and focus on agreeing a trade deal.

Shadow minister for the Cabinet Office Rachel Reeves said: ‘There is clearly a deal to be done. Both sides need to drop the posturing and the threats by getting back round the negotiating table and getting a trade deal done.

‘The country wants the Government to move on from past divisions, secure the trade agreement we need and focus on defeating this pandemic.’

Brexit Party leader Nigel Farage responded to the start of legal proceedings against the UK by arguing the Withdrawal Agreement ‘should never have been signed in the first place’.

He tweeted: ‘The ‘oven ready deal’ was an international treaty — for the EU Commission, that is like the Bible.

‘Whilst the EU always acts in bad faith, all they are doing today is asking Boris to keep his promises.

‘It should never have been signed in the first place.’

He said: ‘Boris Johnson is taking the UK towards an extreme Brexit disaster and total humiliation – ruining our international reputation and threatening the economy with the hardest of Brexits.

‘The Prime Minister has shown he is arrogant, reckless and completely untrustworthy. There is now little doubt that the UK is heading towards a low deal or no deal Brexit, either of which would be devastating for jobs, living standards, businesses and the economy.’

Remain campaigners claimed the legal row could ‘derail’ trade talks, something which they said would have ‘severe consequences’ for the UK economy.

Best for Britain CEO Naomi Smith said: ‘The Government’s ill-thought through Internal Market Bill has already embarrassed Britain on the international stage, but now it’s clear that it threatens to blow up the chances of a trade deal too.

‘For all the positive noises coming out of talks in recent weeks, UK negotiators will be understandably frustrated that this Bill could derail everything.’

Despite today’s escalation in the dispute over the Bill, today’s announcement by Ms von der Leyen does suggest the EU is not in a hurry to clash with the UK on the subject while talks on a free trade deal are continuing.

Infringement proceedings take a long time to progress and are a relatively common tool used by the European Commission – there were around 800 open cases against member states last year alone.

The publication of the Bill had prompted emergency talks in London last month between Minister for the Cabinet Office Michael Gove and European Commission vice-president Maros Sefcovic.

Mr Sefcovic gave Mr Gove a deadline of the end of September for the UK to scrap the plans.

He told his counterpart that ‘the Withdrawal Agreement contains a number of mechanisms and legal remedies to address violations of the legal obligations contained in the text – which the European Union will not be shy in using’.

But Mr Gove said the UK ‘could not and would not’ retreat on the issue as he promised the Government would not back down, putting the two sides on a collision course.