EU figures lashed out at ‘absent’ Boris Johnson last night, demanding to know why he is not taking a central role in post-Brexit trade talks.

While there has been some small movement in the discussions, they remain largely deadlocked in the key areas of fishing rights and state aid rules.

Mr Johnson spoke to European Commission chief Ursula von der Leyen on Saturday and they agreed to ‘intensify’ talks in the run up to a top-level EU meeting on October 15 and 16.

Mr Johnson also set an October 15 deadline for deciding whether a deal is possible, saying  ‘time is running out’ to break the deadlock over fishing rights and state aid rules.

However EU sources claimed talks could go on into November unless the PM took a more hands-on approach, branding him ‘detached’ from the process.

EU sources claimed talks could go on into November unless the PM (pictured today) took a more hands-on approach, branding him ‘detached’ from the process 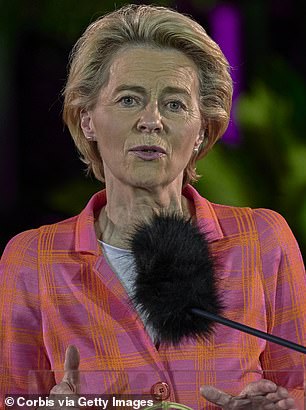 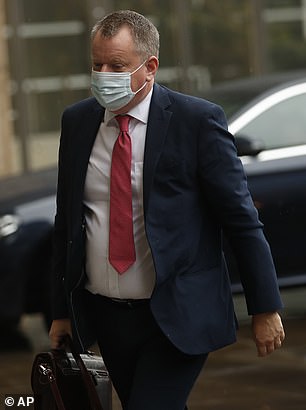 ‘Is he even interested? What does it say to the 27 leaders when an issue as important as this is only dealt with by (UK chief negotiator) David Frost?’ they told the Telegraph.

‘It’s about time people higher up in the hierarchy start involving themselves if they want to achieve something.’

They also suggested that Mr Johnson’s involvement was less than that of predecessor Theresa May.

Yesterday the PM’s official spokesman said Britain needs to know by October 15 if there is going to be a deal with the European Union because businesses need to prepare.

‘We do need to be in a position where we’re able to provide certainty to businesses as to what the terms of our future trading relationship with EU are going to be, and we do believe that we need to be able to give clarity on whether or not there’s going to be a deal by the 15th of October,’ the spokesman said.

But a top European Union official dealing with the talks said that a cliff-edge rupture between the two without even a basic trade deal by the end of the year is becoming more likely by the day.

European Commission Vice President Maros Sefcovic told the European Parliament that ‘time is short’ to reach a deal before the Brexit divorce transition period ends on December 31, effectively giving negotiators less than four weeks to broker a deal which must subsequently go through a lengthy approval process.

And he pointed his finger at British Prime Minister Boris Johnson for making things even more difficult when he decided last month to introduce a bill that breaches the legally binding Withdrawal Agreement it struck with the bloc to make sure it could leave on Jan. 31.

Sefcovic said it made Britain less trustworthy and called the plans ‘a heavy blow to the British signature and reliability. Respecting agreements is first a matter of law, but also of trust and in good faith.’ 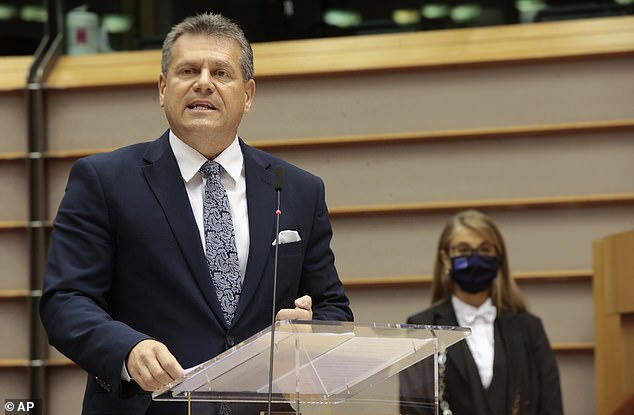 He said the plans left the EU with no choice but to launch legal action against Britain. If passed into law, the Internal Market Bill would undermine the EU’s previously agreed oversight of trade to and from Northern Ireland, which is part of the U.K and shares a border with EU member Ireland.

The bloc is furious that Britain plans to breach portions of the withdrawal treaty that were put in place to maintain an open Irish border, which has underpinned peace since Northern Ireland’s 1998 Good Friday accord.

Sefcovic said the EU would never change anything to the Brexit divorce deal.

Amid fears that Brussels will try to run down the clock to secure concessions, Mr Johnson made clear in a phone call on Saturday that Britain is ready to trade on ‘Australian’ terms – without any framework in place.

Unless the structure of a deal has emerged by the time of a summit of EU leaders on October 15, the UK has threatened to walk away and focus on preparing for that outcome.

Wrangling and rhetoric has escalated in recent weeks as the crunch moment in the trade discussions looms. The ‘standstill’ transition period is set to end on January 1 whether or not there is an agreement.