What none of us knew until recently about Rita Ora is that as well as being a purveyor of mid-chart-ranking tune she is also a highly-qualified microbiologist, specialising in viruses.

Accordingly, her years of research and doctorate in epidemiology from the Sylvia Young Theatre School meant she knew very well that the coronavirus would avoid the affluent areas of west London, leaving Dr Ora and her fellow medical professionals such as Cara Delevingne MD and Professor Vas J Morgan to party en masse.

When the rule-breaking Notting Hill birthday party was discovered Miss Ora swiftly apologised saying it was a spur of a moment decision. (We’ve all had spur of the moment landmark birthday parties, of course.)

Whether you agree with the rules or not it does not matter. They are the rules. If you disagree then stand for parliament and lobby to change them.

No one is above them. We’re all in this together.

Rita Ora, at the Prospero Tequila Launch on November 23 2020. The singer received the Least Selfless award after organising in party in London and defying the covid-19 restrictions this summer

Back in July the singer decided she was above the clearly-stated dress code on London restaurant Sexy Fish’s website.

Miss Glynne arrived in a hoodie, leggings and peaked cap to the Asian-themed diner. For clarity, the website read: ‘we request that guests do not wear sportswear, beachwear, ripped jeans, flip-flops, sliders or workout trainers.’

Miss Glynne may be able to read music but obviously falls short reading websites. She arrived violating several of their sartorial policies and then rather than engaging in a reasoned debate with the staff like an adult, she churlishly took to social media to vent.

A hoodie may be fine to wear around the house but is not appropriate for dining out. If you don’t like the dress code of a Mayfair restaurant, there’s always MacDonalds, Jess. 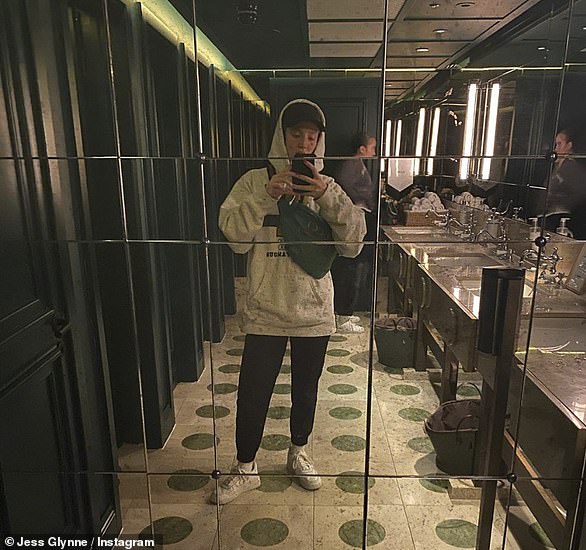 Discrimination: Jess Glynne has faced widespread criticism after she claimed she was discriminated against for wearing sportswear to swanky eatery Sexy Fish in London

Recipient: The President of the United States

Donald Trump must have been sick the day his school in Forest Hills, New York held sports day; clearly he got no practice in having to be gracious in the throes of defeat.

If a young Donald had experienced finishing last in the third grade egg and spoon race his behaviour since 3rd November may not have been quite so childish.

If you don’t like the rules of a competition, don’t take part. Refusing to concede and mooting the idea he’ll not attend the President-Elect’s inauguration on 20th January 2021 is unsportsmanlike and embarrassing – not only for him but for the office he supposedly represents. Currently. 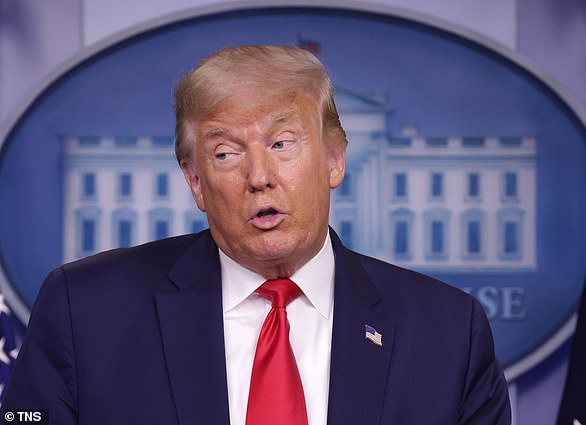 US President Donald Trump still has not accepted his defeat in the recent US presidential election, nor has he acknowledged the win of his political rival Joe Biden (pictured: Trump during a news conference this summer)

Recipient: His Royal Highness The Duke of Cambridge

Back in February, where many where able to get within seven inches of The Duke of Cambridge, the second in line to the throne was seen in the front row at the BAFTAs chewing gum.

Granted, he was going to have to endure actors making jokes at the then-recent Megxit, but there are other ways to release stress that don’t involve the far-from royal habit of smacking gum.

The dress code may have been black tie, and the white gum may have toned nicely with The Duchess of Cambridge’s Alexander McQueen off-the-shoulder ballgown, but it was not appropriate and Prince William should have known better. 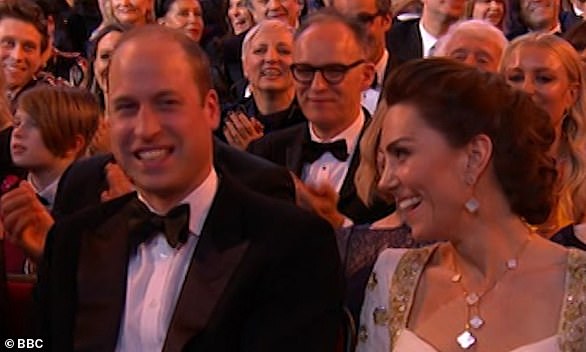 Cracking up: The Duke and Duchess of Cambridge were seen awkwardly laughing on Sunday night after Margot Robbie quipped about Megxit during a BAFTA acceptance speech 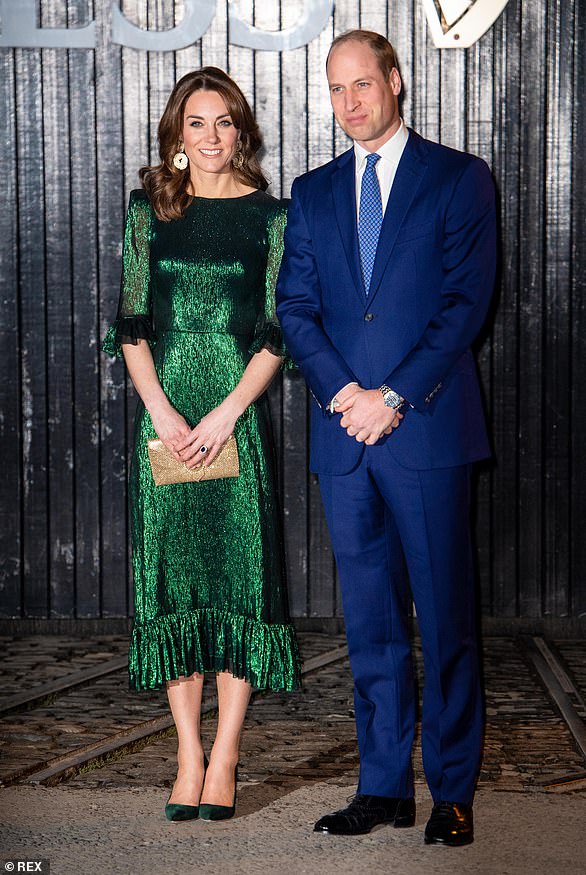 Prince William, 39, was caught chewing some gum during this year’s BAFTAS. He is here pictured with the Duchess of Cambridge during their visit to Ireland at the start of the year

Recipients: The Duke and Duchess of Sussex

In the interests of balance, Prince William’s brother and sister-in-law are also winning a Bad Manners Award this year.

Their sudden, dramatic exit from the main (well, only) royal stage back in January was very bad form.

They failed to respect the public, the institution and their family and give proper forewarning and notice. They chose to press the nuclear button before any reasoned debate had been had.

The couple insisted they wanted a break from the media and wished to avoid the harsh reality of being public figures. Something they are now able to do over on Netflix and Spotify. 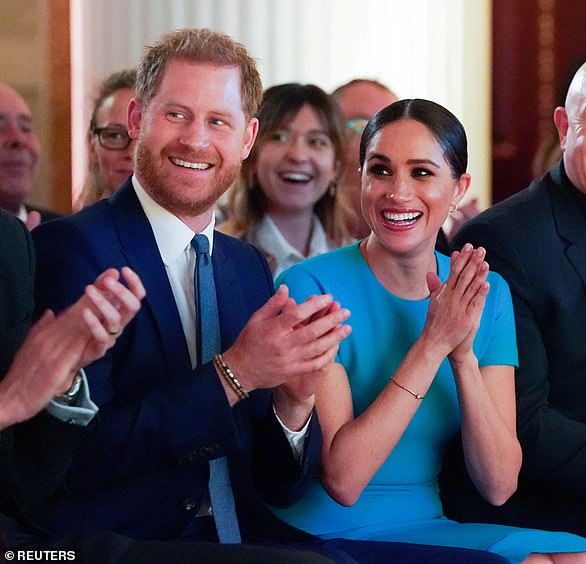 William granted the Duke and Duchess of Sussex the Poor Form award after their shocking exit of the royal family at the start of the year. The couple now live with their son Archie in Los Angeles (pictured in London at the annual Endeavour Fund Awards on March 5)

At the start of the year the award-winning actress Imelda Staunton launched a campaign to have theatres stop their patrons from eating noisy sweets and crisps during performances.

Rightly, she pointed out that the packaging is so noisy and impractical it will disrupt the mood of a show and throw the actors, often at the worst possible moment.

An excessive TV culture has meant audiences aren’t able to sit through any form of entertainment without snacking.

Arguably, Ms Staunton’s campaign did a little too well as three weeks later the theatres closed. There’s no noise now. 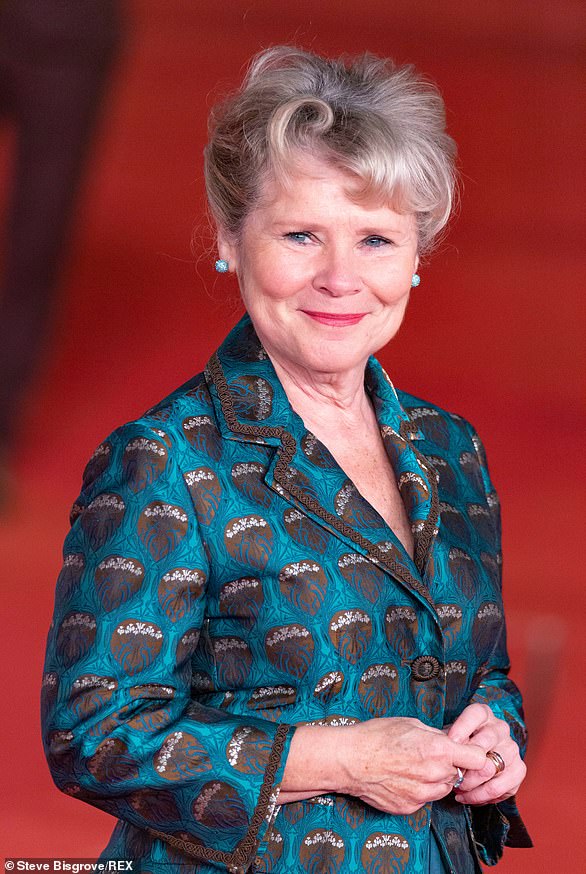 Imelda Staunton, pictured in October 2019, has launched a campaign to have theatres stop their patrons from eating noisy sweets and crisps during performances. It earned her a ‘Special Contribution to Etiquette’ award