The wife of a prominent Sheikh from Dubai’s royal family has posted a harrowing video pleading for help crying that she has been persecuted since leaving him nine months ago with officials trying to snatch her three children.

Sheikha Zeynab Javadli made the startling revelations in a series of moving videos to her 15,000 Instagram followers on Thursday morning during what appeared to be a ‘raid’ by people linked to her husband Sheikh Saeed bin Maktoum bin Rashid Al Maktoum, the nephew of the current ruler of Dubai.

Ms Javadli is a former is a former Azerbaijani gymnast and World and European Championship medallist.

Sheikha Zeynab Javadli (pictured with one of her daughters), the wife of a prominent Sheikh from Dubai’s royal family, has posted a harrowing video pleading for help crying that she has been persecuted since leaving him nine months ago

She married Sheikh Al Maktoum, 43, in 2015 but their marriage hit the rocks nine months ago, when she moved out of the royal palace they shared and into a private villa, where she has been living with her three daughters; Sana, four; Asiya, three and Salama, one.

Her parents have also been living with her since the separation from her powerful husband, a former Olympic shooter who has two other wives and 11 children in total.

In the graphic video, a clearly distressed Ms Javadli, 29, can be heard speaking about people she alleges are linked to her husband entering her home.

She cries: ‘I can’t give my children up to strangers. This is how they are dealing with me. There’s no law.’ 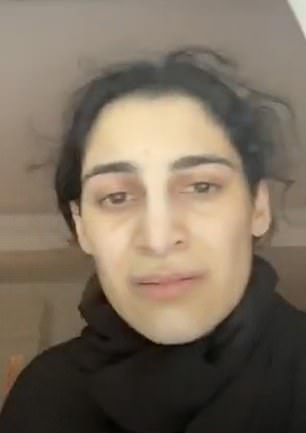 In the graphic video, a clearly distressed Ms Javadli, 29, (pictured) speaks about people she alleges are linked to her husband entering her home

She also claims that she has suffered a campaign of persecution over the past nine months which has involved physical and emotional abuse.

She wails: ‘The manager of the Sheikh was doing all this stuff to me. No one tried to help me, they said “this is a Sheikh issue, we can’t do anything.”‘

A young child can also be heard in the heart-breaking video saying: ‘You can’t take us anywhere,’ as people can be seen in the background gathered in the courtyard of the villa.

A distraught Ms Javadli adds: ‘No, food, no water, no nothing. Persecuted for nine months. They will break my door and snatch my children.’

She also complains that her mobile phone, which contained ‘evidence’ of the harassment she has suffered was also taken from her.

Ms Javadli’s plight has been compared to that of Princess Haya the former wife of the billionaire ruler of Dubai, Sheikh Mohammed Bin Rashid Al-Maktoum.

She fled to London two years ago, along with her two children, telling friends she was in fear of her life.

A High Court judgment later ruled that she was the victim of attempted abduction, forced return, torture and a campaign of intimidation.

Ms Javadli’s friends fear that she may have been ‘detained’ as there has no communication from her since her Instagram posts, despite repeated attempts to contact her.

The whereabouts of her children are also unknown, and sources have also alleged that her parents may have been arrested. 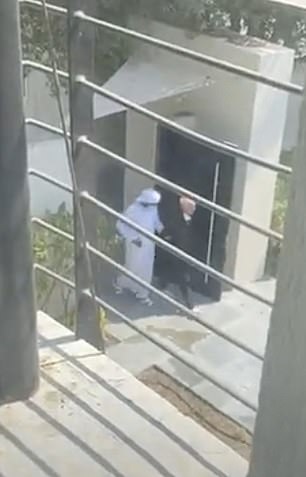 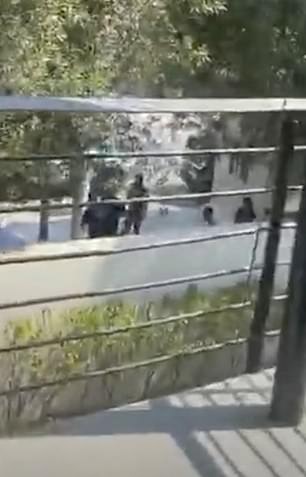 People can be seen gathering in the courtyard of the private villa, where she has been living with her three daughters; Sana, four; Asiya, three and Salama, one

In another Instagram video she posted on Thursday, she appears visibly distressed while locked away in a room on the second floor of her villa as shouting and hollering can be heard in the background.

One friend told MailOnline: ‘She had to lock herself in a room because they tried to take her children away from her and return them to the palace. We are all very worried because we haven’t heard from Zeynab for several hours.

‘She has suffered a lot over the past nine months. She wants to leave Dubai with her children and live a freer life.

‘I really hope that she is safe but there is nobody who can help her. Zeynab even contacted the Azerbaijan embassy for assistance but they said there’s nothing they can do.’ 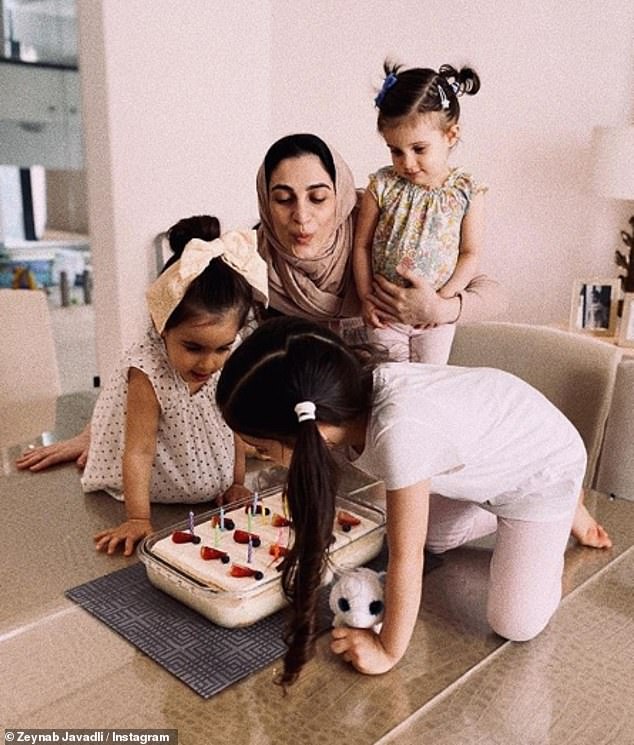 Ms Javadli (pictured with her daughters) married Sheikh Al Maktoum, 43, in 2015 but their marriage hit the rocks nine months ago

Another friend added: ‘They’ve been trying to intimidate and harass her but Zeynab is strong and has refused to give in.

‘She’s determined to leave Dubai with her children but there is no way the Sheikh is going to allow this to happen.’

David Haigh, a human rights lawyer from Detained International, which campaigns on behalf of those suffering from human rights abuses in Dubai and other countries said: ‘We were aware of Zeynab’s case for some time. Some women in this situation have managed to escape but sadly, the majority don’t.

‘In Dubai, royal women and women in general are treated very badly. They are denied their human rights and not allowed to live how they want. Zeynab is a member of the royal family who is being persecuted.

‘She is facing intimidation and isolation and I’m afraid that it’s not going to end good for her.’

The Dubai Media Office and the Communications Office of the UAE London Embassy have been contacted for comment.