Estate agents reported a downturn in house prices across the country in October, according to the latest RICS survey, ending a run of 28 months when house prices were rising.

In September the survey, which takes in the views of RICS member estate agents across the UK, revealed a net positive rating of 30 per cent when agents were asked about house prices, while in October this feel sharply to minus 2 per cent.

However, the overall figure masks regional price differences. Respondents to the survey in areas such as East Anglia and the South East of England were more likely to note price falls, posting net balances of -31 per cent and -16 per cent respectively.

Conversely, respondents based in Northern Ireland and Scotland continued to report an upward trend in house prices, even if the pace of growth was slower than earlier in the year.

Looking ahead, respondents across all parts of the UK are now, on balance, of the opinion that prices will decline to some extent over the next year.

October’s rating suggests ‘house price growth is grinding to a halt,’ commentary in the survey said.

At the same time the number of buyer enquiries fell for the sixth successive month down to negative 55 per cent, falling even further than the negative 36 per cent in September.

Furthermore, for the second month running the number of enquiries fell across all regions of the UK. 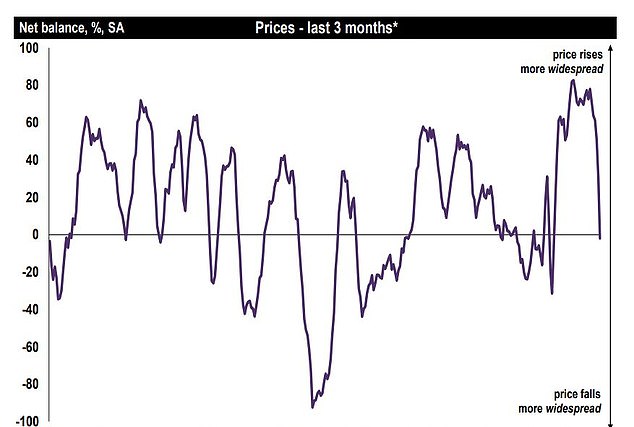 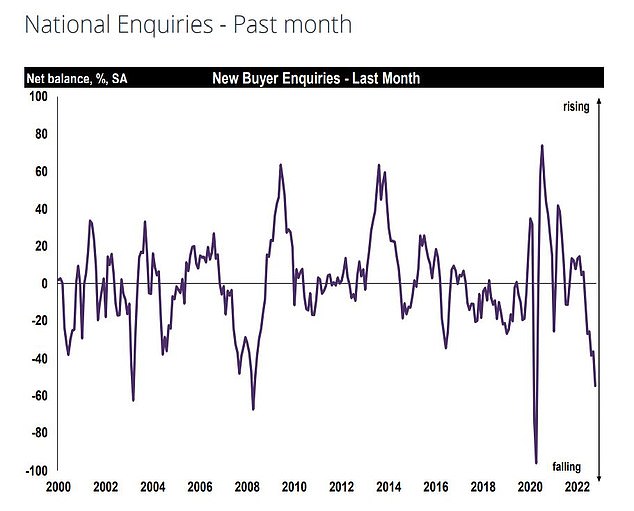 Buyer enquiries are down across the UK, according to RICS, the second month they have fallen

Simon Rubinsohn, chief economist at RICS, commented: ‘The latest feedback to the RICS survey provides further evidence of buyer caution in the face of the sharp rise in mortgage costs.

‘As a result, the volume of activity is likely to slip back over the coming months and realistic pricing is now much more important to complete a sale.

‘The settling down in financial markets could provide some relief although it may be premature to assume this will be reflected in a reduction in lending rates anytime soon. However, the employment picture remains critical to the medium-term outlook and for the time being, that remains solid.’

Estate agency Savills has predicted that prices will fall 10 per cent next year before rising by 1 per cent in 2024. As recently as May, the estate agent was forecasting just a 1 per cent drop in 2023 but the sharp increase in mortgage rates has led to a gloomier outlook.

Simon Wall from Stephanie Macnab Estate Agents, said: ‘The steam has definitely left the market here, although activity remains at what would otherwise be considered a reasonable level.

‘There is greater buyer strength with harder initial negotiations and re-negotiations after survey. Hopefully the calming in the economic outlook will improve matters.

‘At the same time, the number of new listings coming onto the market is also continuing to decline with a net balance of -17 per cent of respondents at the national level citing a drop off.’

Marion Currie at Galbraith Group in Dumfries and Galloway, Scotland, said that while there is still strong interest in available properties, interest is tailing off for winter.

‘The pool of buyers who have missed out on other properties over last two years is still there but diminishing,’ she added.

In the letting market rents are expected to continue climbing as tenant demand keeps rising at a solid pace, with a net balance of 46 per cent of survey participants noting an increase in October.

However, at the same time landlord instructions fell once again according to a net balance of -14 per cent of respondents.

In a year, respondents expect rents to have increased by around 4 per cent nationally