Essendon fans turned on coach Ben Rutten after the Bombers’ season went from bad to worse with a calamitous 10-point loss against West Coast at Optus Stadium in Perth.

The win lifted the 2-12 West Coast off the bottom of the ladder, while Essendon remained in 16th spot and slumped to a 3-11 record for the season. Last week’s shock win over St Kilda is a memory fading fast, while last season’s surprising finals appearance is long forgotten.

Many Bombers fans placed the blame for another dismal showing firmly at Rutten’s feet and called for the coach to be relieved of his duties.

‘Time to go, Ben Rutten,’ a disgruntled fan tweeted, while another called him ‘a disgrace’ and another supporter blasted the Essendon coach for having a ‘dreadful gameplan’.

Another fan, meanwhile, wondered whether Rutten will still have a job by the time the Bombers land back in Melbourne.

A particularly disgruntled Bombers fan described Rutten as a ‘disgrace’

Some within the media struck a similar tone, with Nine Melbourne sports reporter Ayrton Woolley wondering whether the Bombers could convince former Hawthorn boss Alastair Clarkson to end his sabbatical earlier than planned.

‘Because of personnel changes, I did not have big expectations for Essendon this season,’ he tweeted

Rutten is contracted until the end of 2023, but losing to a team that entered the match with a percentage of 52.2 is a bad look for the embattled coach.

To pile further misery on the Bombers, Friday night’s win was the first time in 26 matches West Coast had crashed through the 100-point barrier in a game.

‘It’s amazing that winning feeling. I haven’t felt it for a while,’ Kennedy, who kicked 5.0, told Fox Sports after the game. 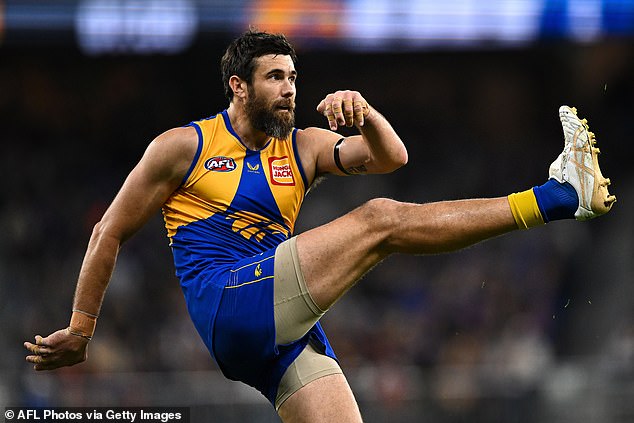 Josh Kennedy was instrumental for the Eagles on Friday night, kicking five goals 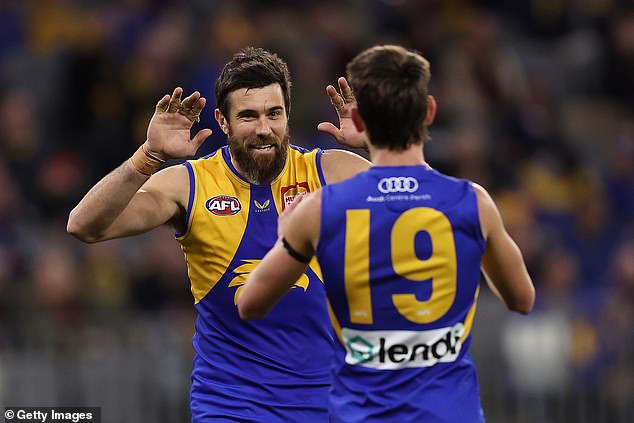 ‘It was great to get a win for them [the fans]. We’ve been struggling. It was a bit of a shootout. We wanted to keep playing brave.

‘[The body] is pretty sore. I’ll keep chipping through. It’s just great seeing the kids come through and playing well.’

Another ugly loss for the Eagles was brewing as the Bombers skipped out to a 22-point lead in the first quarter. 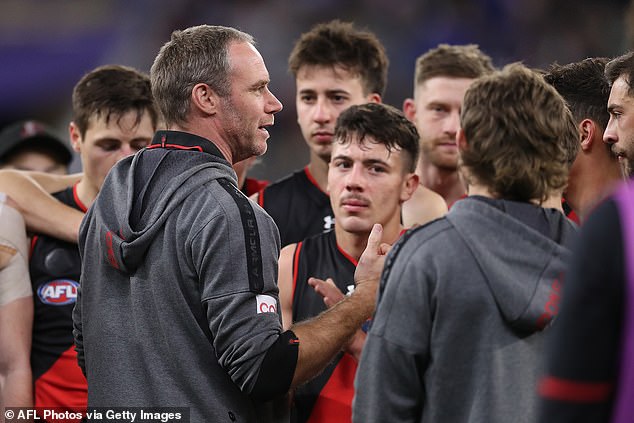 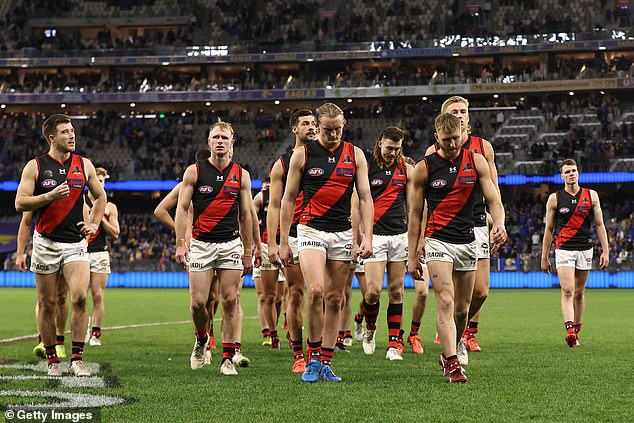 But a moment of magic from Darling helped turn the tide.

Darling snared a one-handed mark in the goalsquare while on his knees to send the crowd wild, and the Eagles unleashed a six-goal blitz in the second term to take a shock five-point lead into half-time.

Rioli and Cripps booted two goals each in the second term, while Wright entered the break with a wayward 3.4 to his name. 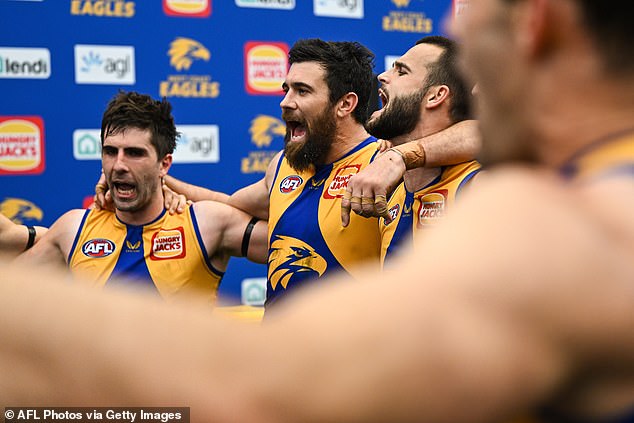 Ryan’s second goal – while being slung to the ground in a tackle – sent the 40,933 crowd wild.

Kennedy looked to have put the game to bed in the final term when he followed up a goal from a pack mark with another major from point-blank range, extending the margin to 22 points.

The Bombers sent a major scare with two goals in the space of a minute to close the gap to 10 points with two minutes remaining, but West Coast held firm from that point on.