Liz Truss will today hit out at the Government’s focus on ‘fashionable’ race and gender issues at the expense of tackling disparities in poverty and injustice.

The women and equalities minister will set out a fresh ‘Conservative values’ approach in her speech to the Centre for Policy Studies, entitled The New Fight for Fairness.

Her new proposal will dismiss quotas, targets, unconscious bias training as ‘tools of the Left’ that ‘do nothing to fix systems’ and will instead focus on reforms that promote equality.

However it comes after new figures revealed that the gender pay gap has significantly widened at the Department for International Trade (DIT) – which Ms Truss took over in July last year.

Liz Truss hit out at the Government’s focus on ‘fashionable’ race and gender issues and will dismiss quotas, targets, unconscious bias training as ‘tools of the Left’ that ‘do nothing to fix systems’

During her equalities brief today, Ms Truss will criticise the ‘narrow focus’ of the 2010 Equality Act which overlooks socio-economic status and geographic inequality’, The Daily Telegraph reports.

She will also say that the debate surrounding equality must be ‘led by facts… not by fashion’ and stress the need for objective data.

A Government source told The Daily Telegraph: ‘The point is that fashionable causes may be good causes, but it leads to other people and real issues being ignored and neglected.’

However it comes after Labour said the growing divide within Ms Truss’s Department for International Trade ‘raises serious questions’ about the Government’s commitment to close the gender pay gap when Ms Truss’s department is ‘clearly going backwards’.

The gap in the DIT, which Ms Truss took over in July last year, has widened every year since the first report in 2017, when the mean stood at 3.6 per cent.

A DIT spokeswoman said the department had hired more women than men over the past year but claimed the gap was widened due to the ‘overall distribution of women across (pay) grades’.

But shadow women and equalities secretary Marsha de Cordova said: ‘It raises serious questions about the Government’s commitment to closing the gender pay gap when the department run by the minister for women and equalities is so clearly going backwards when it comes to average pay and bonuses.’

Felicia Willow, chief executive of the Fawcett Society women’s rights charity, said there is a ‘real risk’ the gender pay gap will widen across the country when the impacts of the pandemic are fully realised. 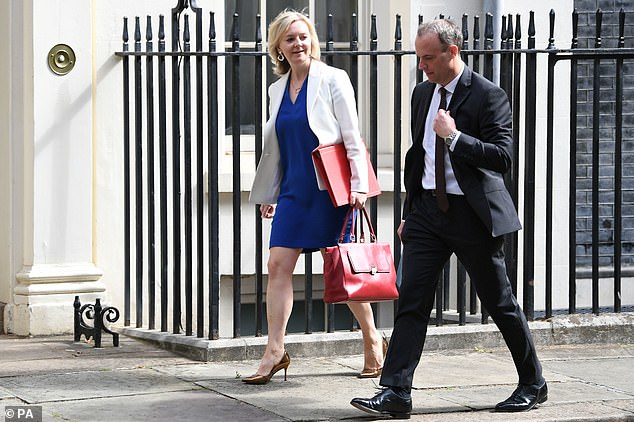 ‘To help push against that tide, employers need to take decisive action. The Department for International Trade has set out a proactive plan on its pay gap – they will need to explore the reasons for this negative change and adjust that plan accordingly,’ she said.

‘But Government has a vital wider role to play.

‘The Fawcett Society is keen to see gender pay gap reporting reinstated urgently, extended to all employers of 100 employees or more and to cover ethnicity, and to require all employers, not just Government departments, to take action.’

The DIT spokeswoman said: ‘DIT is committed to ensuring it is a leader in gender equality and we are actively working on evidence-based actions to ensure that all staff have the opportunity and ability to pursue their goals and achieve their potential whilst working for the department.

‘Over the last year, DIT has hired more women than men, including into senior Civil Service roles, but the overall distribution of women across grades has contributed to widening our gender pay gap.’