‘English wine is thriving’: Chapel Down returns to profit after selling a record 1.5m bottles as more people swap champagne for British sparkling

England’s biggest winery Chapel Down has returned to profit as it sold a record 1.5million bottles of wine and spirits last year.

The company, which has 780 acres of vineyards in the South East, said it enjoyed record revenues as more people swapped champagne for sparkling wine made in Britain.

Unveiling its full-year results, Chapel Down said it made pre-tax profit of £1.1million, compared to a loss of £7.9million in 2020, when adjusted for the sale of its beer and cider business Curious Drinks.

It comes as the company was signed up as cricket’s official bubbly earlier this month thanks to a partnership with the England and Wales Cricket Board.

Chief executive Andrew Carter said English wine was ‘thriving’, and the company was on track with plans to double its size over the next five years.

‘2021 was a year of great change for everyone, as the world adjusted post Covid and Brexit, and faced up to the variety of challenges that these brought for business,’ he said.

‘Despite these hurdles, the English wine region continued to grow and excitement around the opportunity for English wine increased in every quarter – amongst customers, consumers, critics and retailers alike.’ 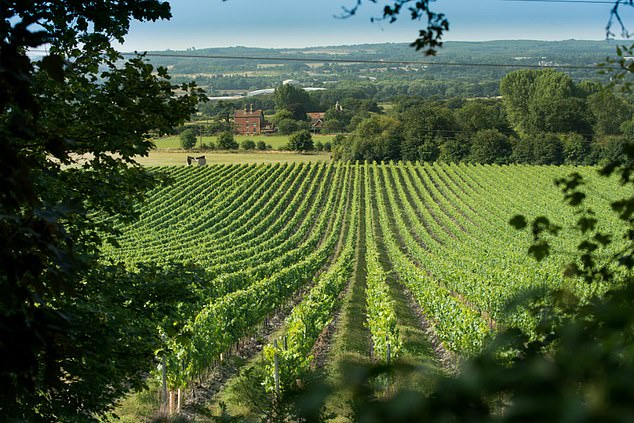 The company expects revenues to keep growing this year, thanks to the rising popularity of its wines and price increases.

A case of six bottles of Chapel Down’s Brut NV, one of its cheapest sparkling wines, generally sells for £168 – which makes it £28 a bottle.

‘During times of inflation strong brands cope the best because they have pricing power as a result of their strong appeal to consumers,’ chairman Martin Glenn said.

‘This is certainly true for Chapel Down.’

Listed on the challenger Aquis stock exchange, the winery has the support of ‘an army’ of around 8,500 shareholders.

It said it will be planting a further 150 acres of vineyards in the next couple of year, which will increase its fruit acreage to 900 acres.