EXPRESS INFORMER > News & Politics > England’s oldest pub will join 40,000 others in opening its doors tomorrow as restrictions are eased

Over its 900-year history it has rarely turned away a weary traveller seeking restoration and mischief over a tankard of ale.

Since December, England’s oldest pub – which survived the Black Death and sheltered a young King Charles II in a priesthole during the Civil War – has endured one of its longest-ever closures, leaving its dusty candlelit rooms to the ghosts of executed cavaliers which reportedly haunt its halls.

But tomorrow, the Royal Standard of England, deep in the Buckinghamshire countryside, will join 40,000 other pubs across the country in throwing open its ancient doors to punters once more as the latest lockdown rules are relaxed.

Not all pubs have made it through – at least 2,000 across the country have closed permanently over the last year.

But at the Standard, which is said to have been bestowed its grand name after Charles II met his mistresses upstairs, there has not been this much excitement since local railwaymen were illegally served with ‘Owd Roger’, a strong local country ale, by the pub’s landlords in the early 20th century.

The Royal Standard of England, pub near Beaconsfield, Bucks, before full re-opening next week. Owners Matthew and Anna O’Keeffe (pictured) have kept their business going and retained staff during lockdown 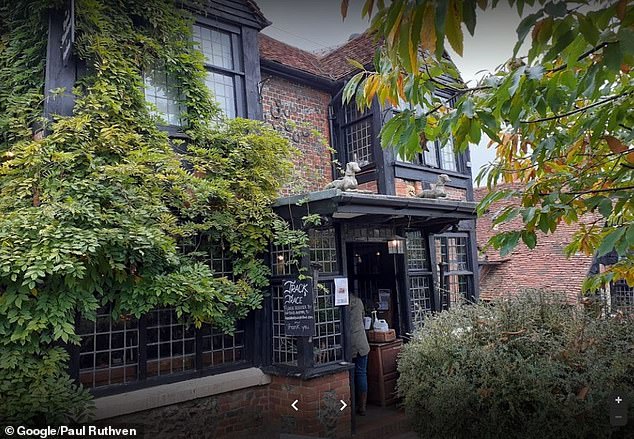 Tomorrow, the Royal Standard of England, deep in the Buckinghamshire countryside, will join 40,000 other pubs across the country in throwing open its ancient doors to punters once more as the latest lockdown rules are relaxed

So what has it been like trying to run a pub during the past frustrating year, as the covid measures have flip-flopped more often than a remorseful drunk’s resolve?

Matthew O’Keeffe, 63, and his wife Anna, 59, own and run the sprawling 13th century brick-and-timber watering hole in the hamlet of Fort Green, outside Beaconsfield. It normally draws a varied clientele of locals and tourists, keen to take advantage of the extra-large tables, family-friendly garden and 7 per cent-strength beer.

Here, they describe trying to stay afloat during one of the most turbulent periods in the pub’s history. There may not have been executions in what is now the car park, as there were 300 years ago, nor ambushes by enthusiastic highwaymen.

But it was not, they say, without its very modern battles.

Once a cask of real ale has been opened, it starts to go off after just four days. At the time of the first lockdown, the pub had 12 open casks – each with £100 worth of beer. All had to be wasted. Since it’s illegal to dispose of beer down the drain, it was poured over an area of concrete at the back of the pub.

In addition, there were 25 kegs (containing 55 pints each) and several casks (72 pints) unopened in the cellar. All had to be poured away, too, as Matthew was not allowed to sell it. Four kegs were given to regular drinkers. During the second lockdown, the brewery took back unopened kegs, but during the first set of closures there was no system in place to recover the costs, even on insurance. 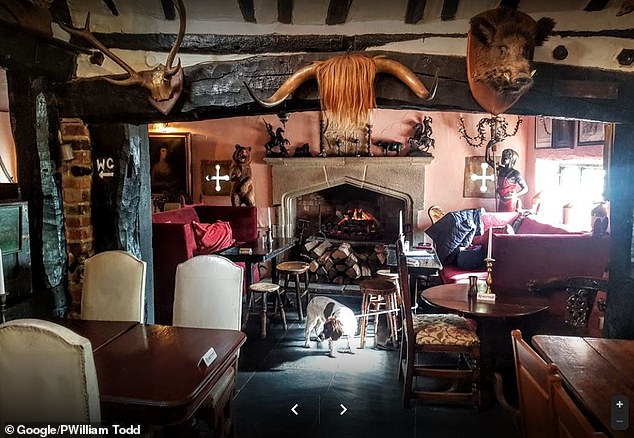 At the Standard, which is said to have been bestowed its grand name after Charles II met his mistresses upstairs, there has not been this much excitement since local railwaymen were illegally served with ‘Owd Roger’, a strong local country ale, by the pub’s landlords in the early 20th century

When pubs closed in March last year, Matthew had just ordered £10,000 worth of stock.

‘It made me so angry,’ he says. ‘I wish government advisers had some awareness of how hospitality operates. If we’d been given a week’s notice, I would have stopped ordering.’

What he and the staff were unable to eat themselves was given to neighbours and friends. Some kind folk sold items such as cabbages, using honesty boxes at the end of the gardens – helping to recover about £60. When told to shut again just before Christmas, the Royal Standard had 12 turkeys to feed 120 people who had each paid deposits of £70 for Christmas lunch. After refunding them, Matthew turned the birds into turkey and ham pie for the freezer – all of which were sold. By chance, Irish comedian Ciaran Dowd was filming his TV series Don Rodolfo in the pub and needed two turkey carcasses to throw around for one scene – which the production team bought for £30 each.

Before lockdown No 1, the Royal Standard employed 21 full-time and 13 part-time staff, overseen by Italian-born general manager Edzio. Ten staff are live-in and most staff were furloughed. But two had joined too recently to qualify for furlough, so they were kept on wages. Two employees, a Pole and a Romanian, went home and have not returned. With fewer Eastern European workers available, the pub has had to offer wages that are 10 to 15 percent higher than before. Tomorrow will see 50 staff back at work – more than it employed before the first lockdown. This is because table and garden service is more labour-intensive. A knock-on effect that is financially beneficial is that greater contact between staff and customers has led to people being encouraged to order food and wine more adventurously – and more expensively. It’s called ‘upselling’ in the trade. 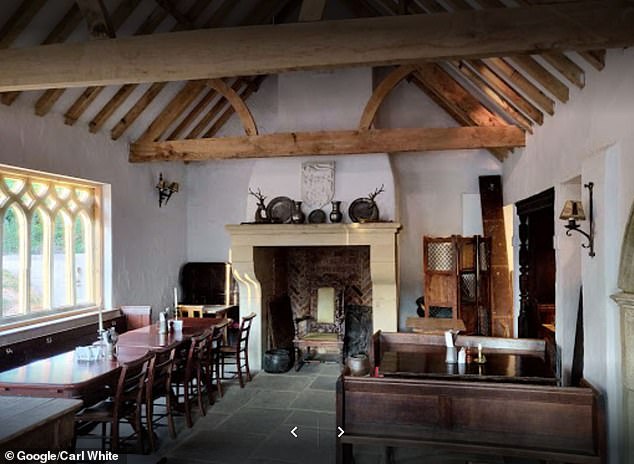 Matthew O’Keeffe, 63, and his wife Anna, 59, own and run the sprawling 13th century brick-and-timber watering hole in the hamlet of Fort Green, outside Beaconsfield

Pre-Covid, the pub had an annual £1.6 million turnover and had invested long-term to double the kitchen size. This took the O’Keeffes’ mortgage to £1.7 million and they hoped to turn over £2 million for 2019/20. But then the curtain came down. Mother’s Day 2020, Sunday March 22, was due to be a big money-spinner with almost 200 people booked. But on the Friday before, pubs and restaurants were ordered to close.

Weekly takings of £40,000 fell to zero. Even with staff on furlough, there were still monthly outgoings of £10,000 – mortgage repayments, payments on hired equipment etc. Despite a reduced wage bill, other staff National Insurance and pension contributions had to be paid. The couple’s bank allowed them to take a holiday on repayments, but still had to pay interest. Thus their mortgage bill for the year was cut from £18,000 to £10,000. ‘We had £60,000 in the bank and worked out that we could survive six months,’ Matthew says.

Fourteen weeks later, on July 4, they were able to reopen and thanks to Eat Out To Help Out in August, turnover briefly hit £40,000 a week. But further lockdowns and restrictions followed, clobbering trade, and like all pubs, the Royal Standard had to shut for most of November. Despite a brief bit of trade in December, it shut again five days before Christmas. So for the financial year 2020/21, turnover was down to £700,000 – little more than a third of what it expected. However, the summer reopening allowed the O’Keeffes to rebuild their savings to reach £100,000. Several government schemes also helped, including being able to defer a a £60,000 VAT bill and being excused the annual £44,000 business rates bill. At the beginning of the third lockdown, the pub got a grant for £18,000 as well as a government loan. Good financial management meant they repaid it early.

Some breweries, such as Greene King, have spent about £9,000 per pub on social-distancing measures and safety equipment. However, the Royal Standard drew the line at installing Perspex screens between tables. It has, however, installed sanitisers, barcodes for customers to use to scan the NHS track and trace and a one-way system. ‘Why would you want to go to a pub which looks like a hospital?’ Matthew says. Even though the pub has abided by all rules, a few hostile reviews appeared on TripAdvisor, such as ‘Pub has no Covid safety. Avoid.’

The Royal Standard has benefitted because some pubs in Beaconsfield town centre, with smaller gardens, have not yet re-opened. Yet many older customers, who tended to drink at lunchtime, have not returned. Last Thursday, when it rained, there were only two customers all lunchtime despite a full complement of staff.

All regular suppliers have stayed in business but prices have risen – with beer up by between five and 10 percent. Oysters are now 85p each – up 20p. So, with the pub’s wages rising, too, prices are now higher, with main courses costing an extra £1.

Lockdown allowed maintenance work and redecoration that might not otherwise have been done. The pub has been painted inside and out; tables sanded and varnished; the heating fixed; the kitchen floor coated with resin; the bathrooms upgraded with waterless urinals and the car parks scrubbed.

The O’Keeffes allowed walkers to eat packed lunches at his tables during lockdown, rather than make them no-go areas with yellow tape as some councils have done with park benches. The couple have applied for planning permission for several £30,000 oak-framed, clay-tiled gazebos in case of future restrictions on indoors dining.

The photogenic Royal Standard with its rare, barrel-shaped settle, means it’s often hired to film scenes for programmes such as Midsomer Murders, crime series Endeavour and the movie The Theory Of Everything about the late astro-physicist Stephen Hawking. During lockdown there was less demand but TV production teams paid £1,000 a day compared to the usual £3,000.

After Matthew O’Keeffe recovered from Covid, he and Anna are now raring to get back to normal. They’ve had time to experiment with new recipes. After re-opening last month to serve outside, they’ve been taking £16,000 on Sundays but believe it could have been more if they had more staff. Regardless, they vow not to be defeated. ‘The pub has been around for 900 years and survived the Black Death,’ Matthew says. ‘It ought to survive Covid.’