By Richard Gibson and Paul Newman for the Daily Mail

Ben Stokes was consigned to spectator status on his first match day since being made England Test captain as Durham’s top order made the most of a flat New Road pitch.

Stokes spent the evening session with his pads on as the visitors powered to 339 for three courtesy of Sean Dickson’s third hundred of the season and half centuries from captain Scott Borthwick and David Bedingham.

Earlier, opening partner Alex Lees had failed to make it three three-figure scores in as many outings since returning from Test duty in the Caribbean when he succumbed to a loose drive at Ed Barnard.

Alastair Cook, one of Stokes’s predecessors as captain, ground out 107 from 268 balls for Essex against Yorkshire at Chelmsford while two openers dropped by England in the past year, Warwickshire’s Dom Sibley and Surrey’s Rory Burns, were also among yesterday’s six centurions.

Sibley, 26, spent last winter revamping his technique alongside his boyhood coach Neil Stewart after pulling out of the England Lions tour of Australia to work on his game. 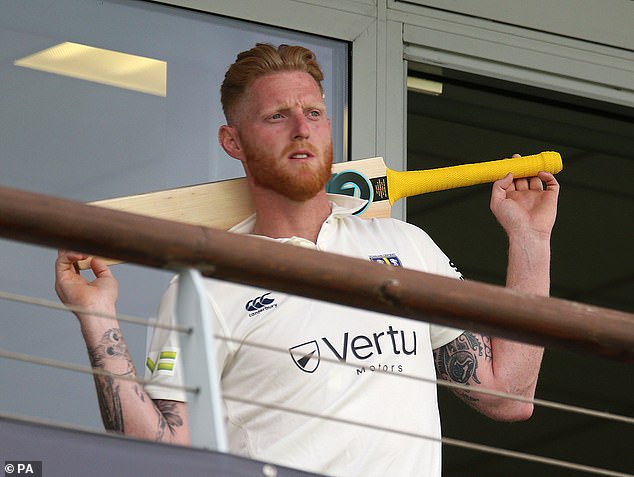 A more side-on stance was noticeable at Old Trafford as he took advantage of the absence of Lancashire’s resting England duo Jimmy Anderson and Saqib Mahmood. With excellent running between the wickets a feature of his unbeaten 118, Sibley helped develop a strong position for the reigning champions.

However, Pakistan’s Hasan Ali — who began this round as the joint top wicket-taker in Division One with 20 — struck with the second new ball to redress the balance, and Warwickshire slipped to 263 for seven.

Burns held Surrey’s innings together with 107 against Northamptonshire after failing to reach 50 in his previous six visits to the crease this season.