Pictures of patriotic English streets adorned with bunting, St George’s flags and other Three Lions-themed decorations have been shared as the nation prepares for Sunday’s crunch match against Italy.

Is your street even more patriotic than these?

Please email your images to pictures@mailonline.co.uk

The flag-tastic streets from all corners of the country, from Essex to North Tyneside to Bristol, have been shared as fans wait in nervous anticipation for England’s biggest game in half a century.

One resident in Chelmsford, Essex has succeeded in covering every available inch of his house in nine giant St George’s flags.

Residents in Torrington Avenue, Bristol have also taken it upon themselves to show their support for their team and have lined their street with bunting as far as the eye can see.

And those living on the Kirby estate in the capital are having to dodge the hundreds of flags that are draped across the railings when they hang their washing out.

Streets across the UK, from London to Bristol, are decked out in flags today as the country gears up for England vs Italy in the Euro 2020 final.

It is the first time that England have reached the final of the European Championship – and the first time they have made it this far in a major tournament since the World Cup triumph in 1966.

Paul Bibby, 55, poses outside his Chelmsford, Essex semi-detached home that he has decorated with England flags 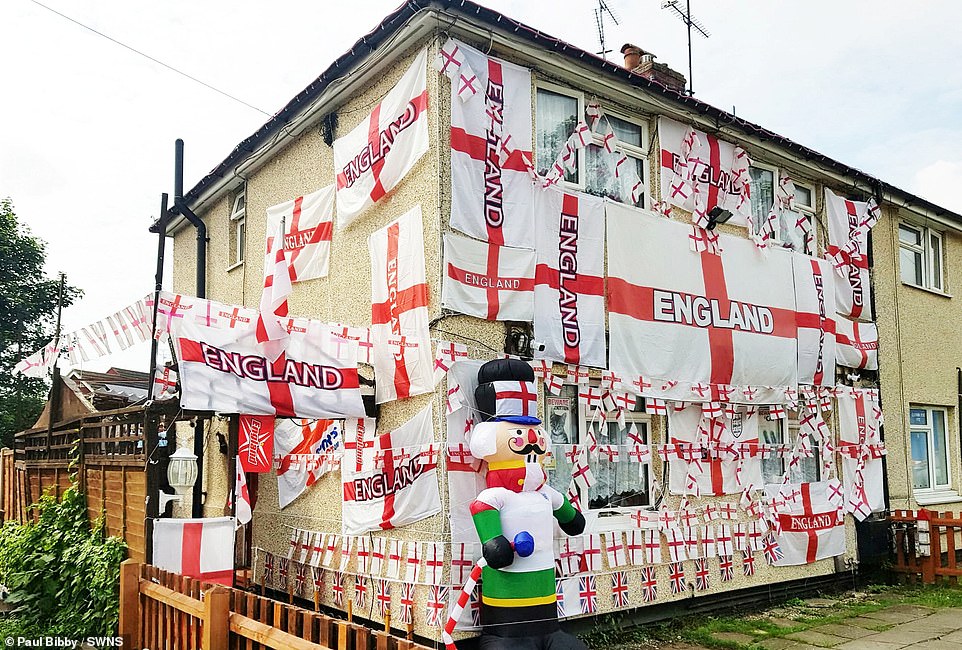 Paul says he always decorates his house for special occasions, but this time he has strung up 22 individual St George’s Crosses, plus dozens more on bunting 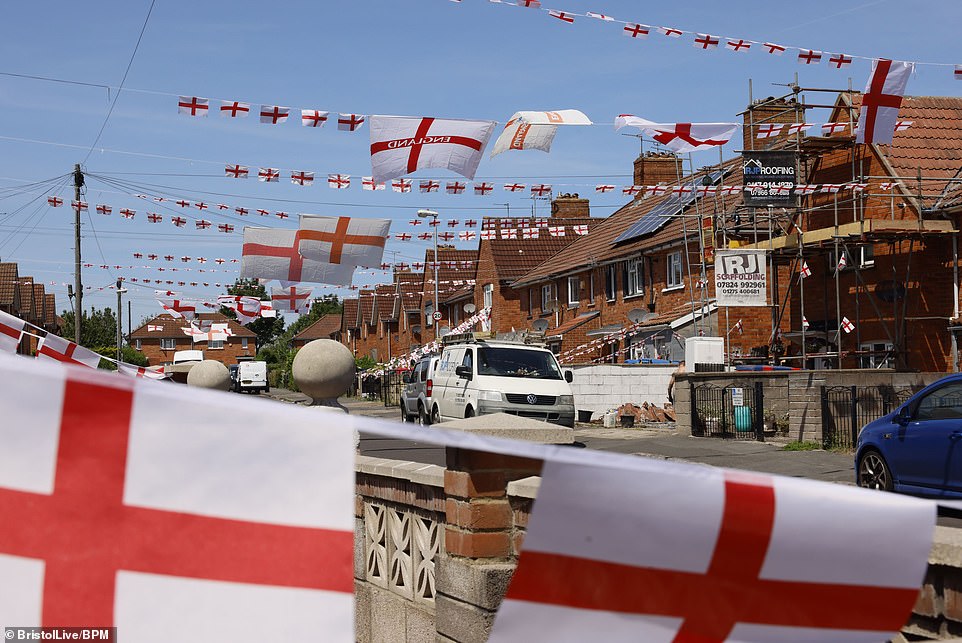 Flag-tastic: Hundreds of households across England have followed Paul’s lead and adorned their available space with regalia

A collective spirit of hope and expectation has been steadily building throughout the tournament, as England marched on through the group stage and safely navigated their knockout matches.

Hundreds of super-fans across the country are now repaying the Three Lions’ heroes by decking out their houses in patriotic regalia.

Paul Bibby, 55, has covered every inch of his house in Chelmsford, Essex in England flags ahead of Sunday’s Euro 2020 final against Italy.

Carer Paul has strung up 22 individual St George’s Crosses – plus dozens more on bunting – outside his semi-detached home.

Football fanatic Paul, who has also installed an inflatable mascot, predicted a 2-1 win for England on Sunday. 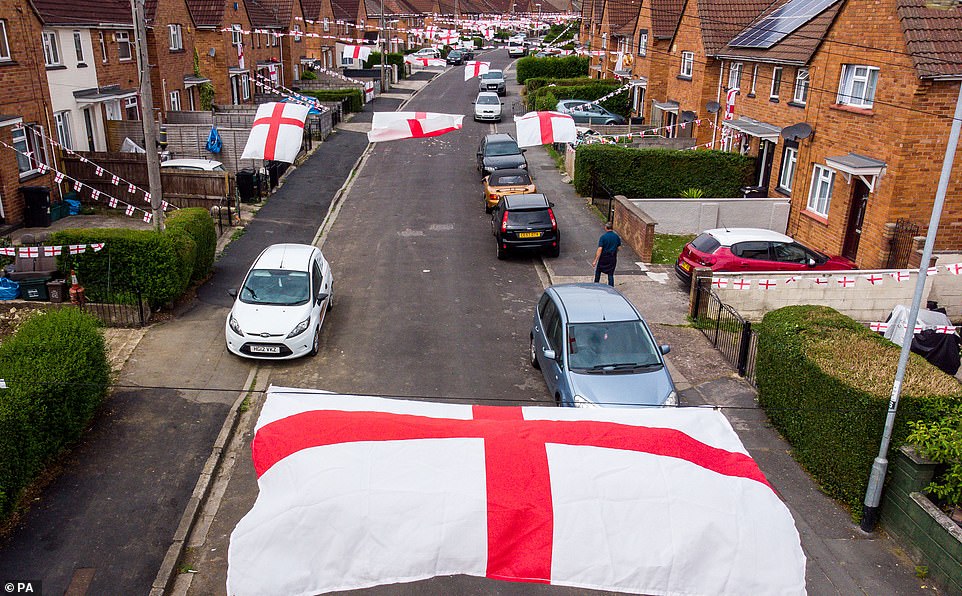 Is this England’s most patriotic street? Hundreds of flags have been put up across Torrington Avenue, Bristol 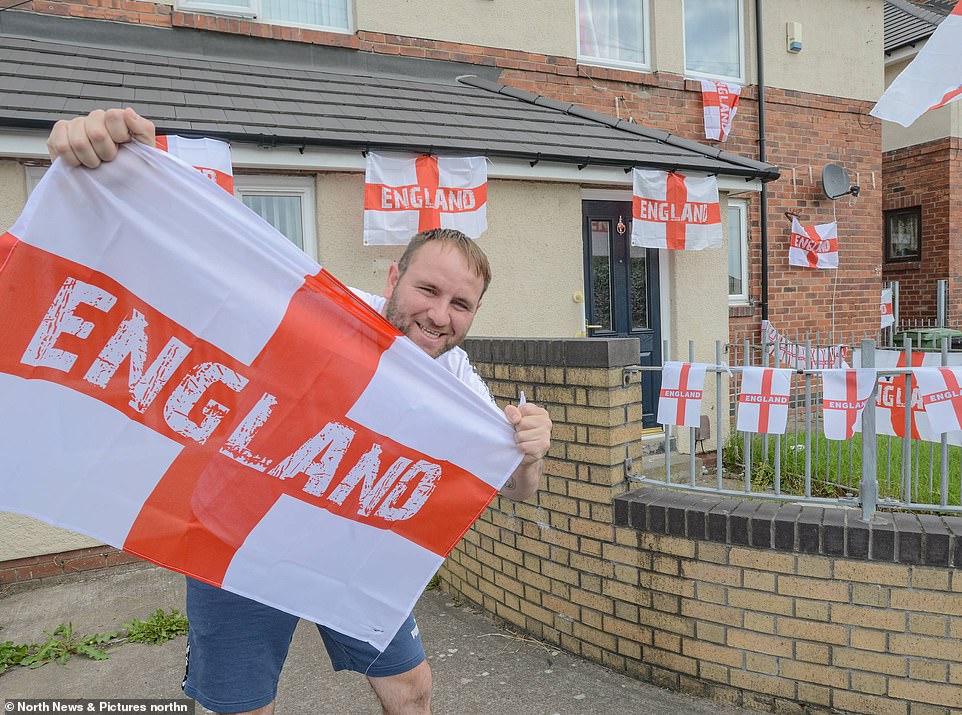 Charlie Thompson, from North Shields, in North Tyneside, who has covered the outside of his home with England flags in celebration of their progress to the final of Euro 2020 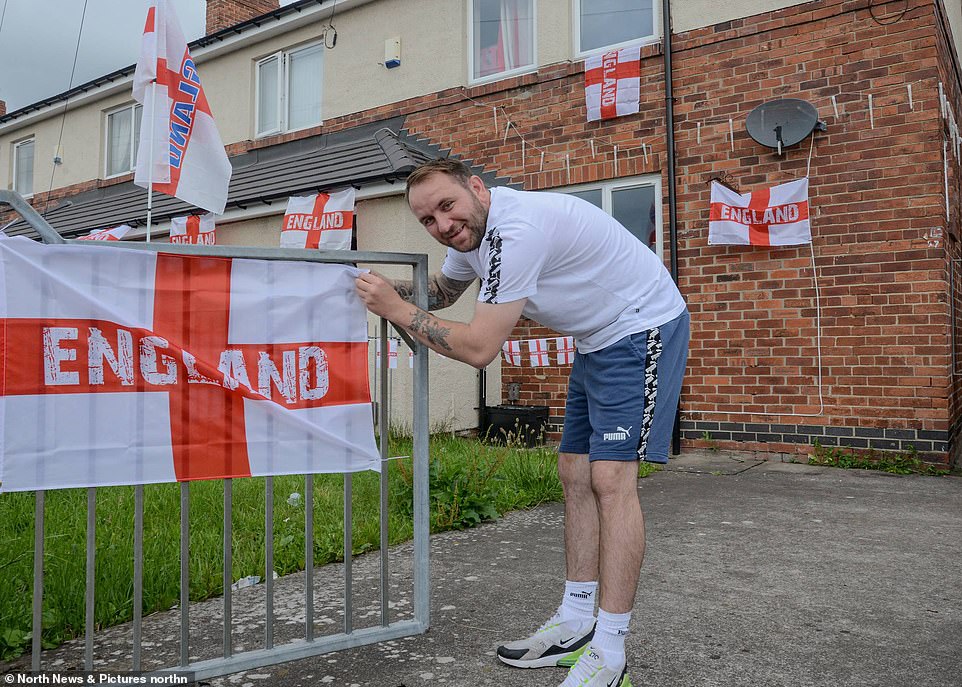 Flying the flag: Charlie’s North Tyneside home has been decked out with the iconic St George’s Cross 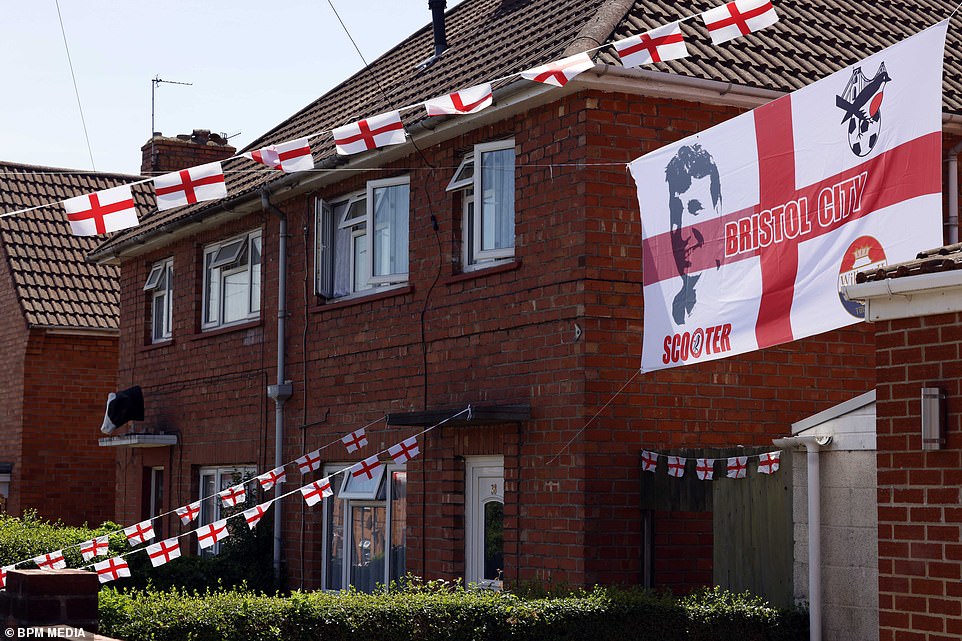 Tributes were paid to Bristol City and England fan, Paul ‘Scooter’ Surridge (pictured on flag above) who passed before Euro 2020 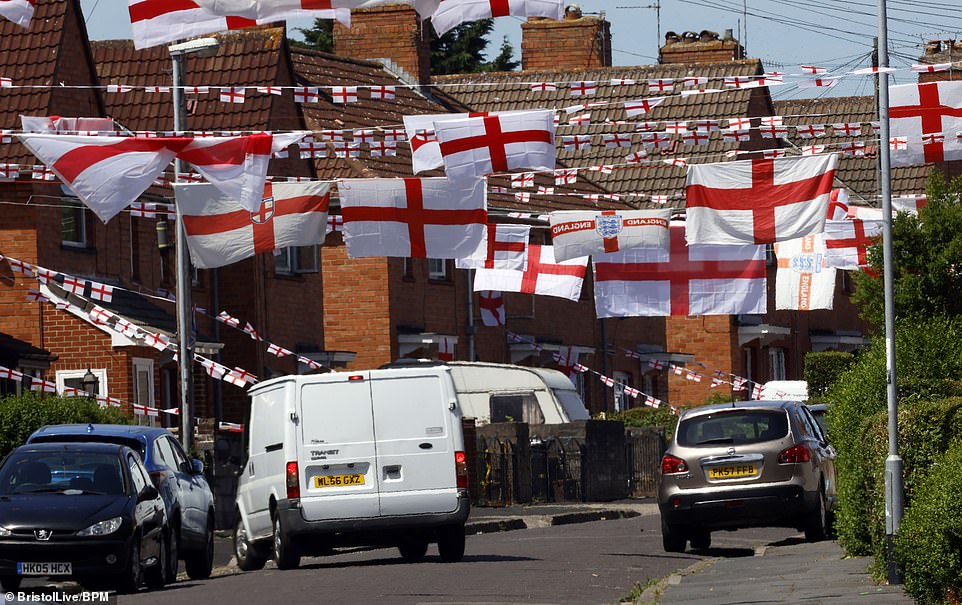 He said: ‘After the year we’ve had, I wanted to do something to put a smile on people’s faces.

‘I’ve been decorating my house for special occasions for the past ten years but I wanted this year to be special, so I’ve done even more than I would normally.

‘I’d say it’s been a success – you can’t even see the front of the house for all the flags.

‘I’m very patriotic and I like to stay positive, but I really do think it’s coming home this year. Italy are a good team, but so are we.

‘I’d say it’ll be a good game too – I predict a score of 2-1 to us. I think it’s our time so why not put up some decorations to celebrate?’ 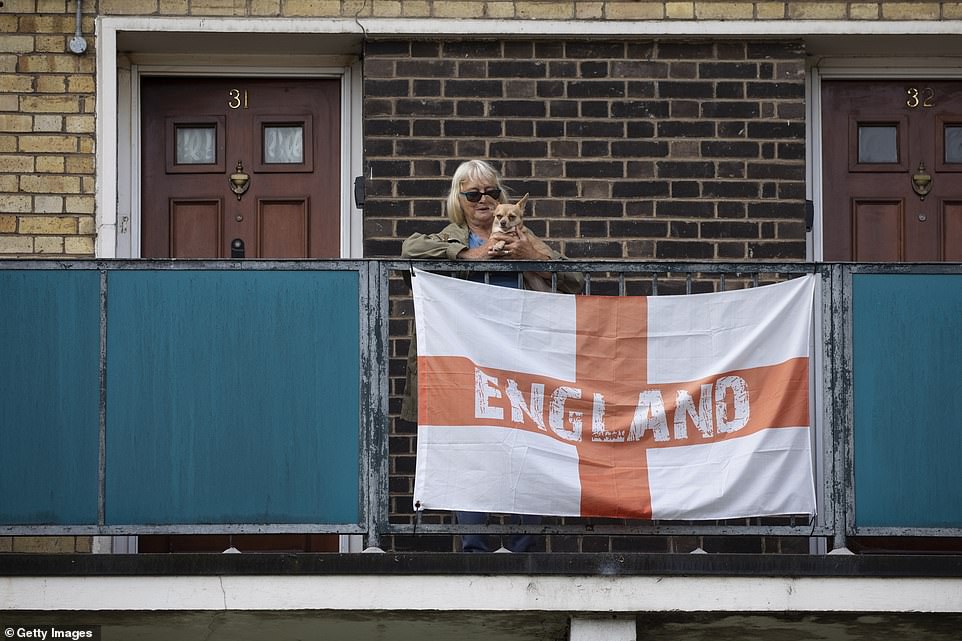 A woman and her dog stand on a balcony next to an England flag on the Kirby estate in Bermondsey, south London 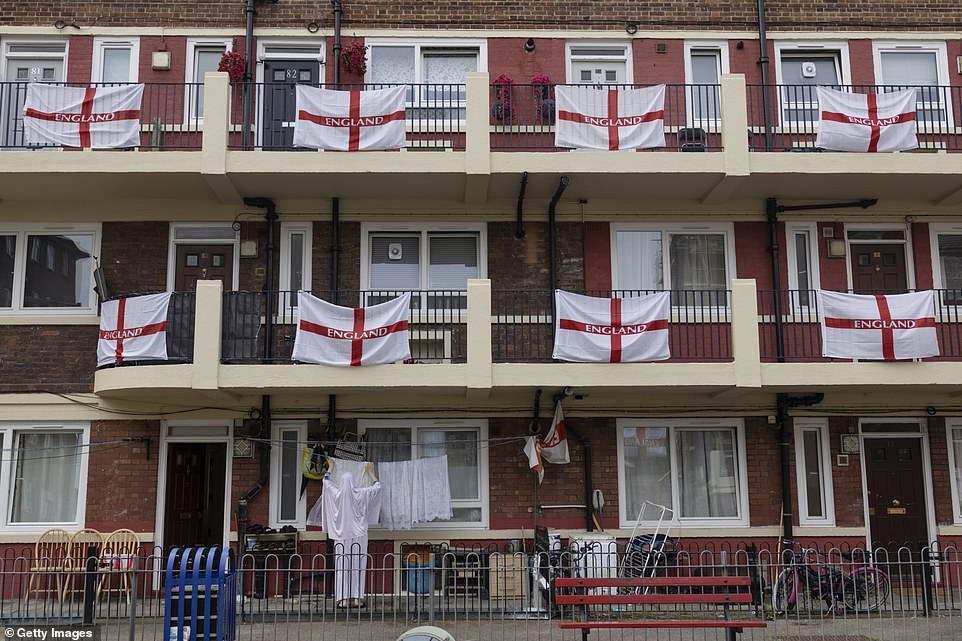 The Kirby housing estate in Bermondsey, south London has hung flags in celebration of England at major footballing tournaments since 2012 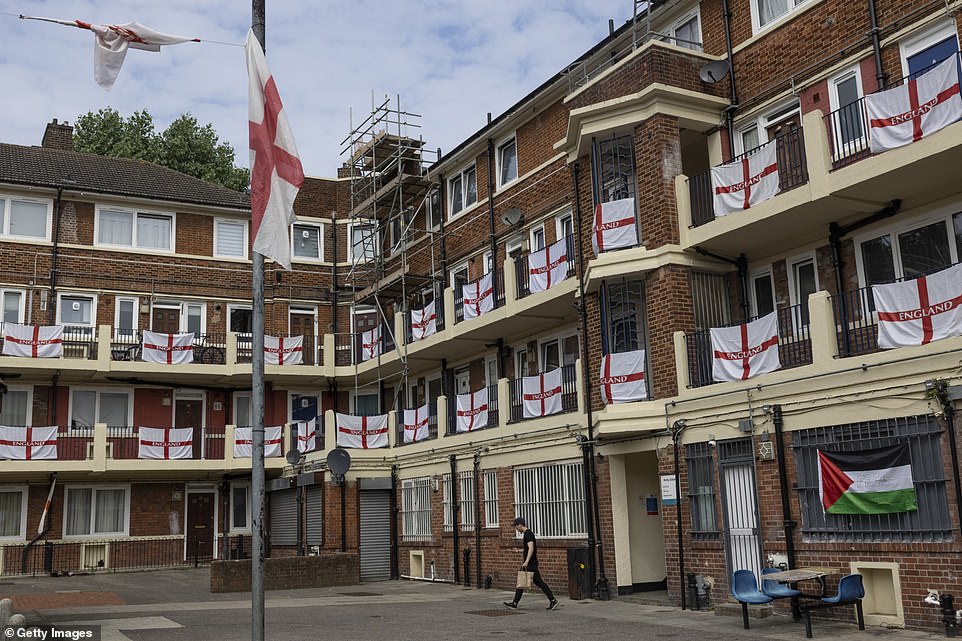 Residents spent several days putting up bunting and laying the flags over their balconies, on street lamps and sticking them to the estate’s walls

Paul lives with wife Linda Cummings, 58, and son Aaron Bibby, 33, and is well-known in his local area for his spectacular decorations.

Charlie Thompson, from North Shields, in North Tyneside, has also covered the outside of his home with England flags in celebration of their progress to the final of Euro 2020.

His incredible collection is not unique, as thousands have geared up throughout the tournament to celebrate the return of the Euros following the cancellation of the games in 2020 due to the coronavirus pandemic.

In one estate in Bermondsey, south London, residents have shown their patriotism in a similar way, covering the housing estate in hundreds of flags in a tradition that has been observed in the area since 2012.

Those living on the Kirby estate in the capital have proudly erected hundreds of flags adorned with St George’s Cross.

Just before the tournament kicked off residents spent days putting up bunting and laying the flags over their balconies, on street lamps and sticking them to the estate’s walls.