Only after losing tens of thousands of pounds did the former England goalkeeper finally escape the grip of betting firms.

‘I’ve won at most things in my life, in terms of my career, but I’ve never won at gambling,’ said the 70-year-old in an exclusive interview with the Daily Mail.

He said his problem ‘took off really badly’ with the advent of online gambling. Shilton, who holds the record for England caps, spoke out after a series of disturbing revelations about football’s increasingly close ties to betting firms.

He was moved by the stories of young men, including professional footballer Lewis Keogh, who have killed themselves over gambling addiction. The sport has become inextricably linked with the betting industry, with 27 of England’s top 44 clubs now having a gambling company for their shirt sponsor.

SPeter Shilton and his wife Steph are pictured at home in West Mersea, Colchester, Essex

This month the Mail exposed how FA Cup matches are being streamed live on betting sites to any fan with an account.

The former England star credits his recovery to his wife Steph, a former NHS manager who confronted him with bank statements showing his losses.

When he finally decided to scrap his habit he told her: ‘I’m losing, and I’m worried I’m going to lose you.’

Speaking out for the first time to back the Mail’s Stop the Gambling Predators campaign, Shilton said: 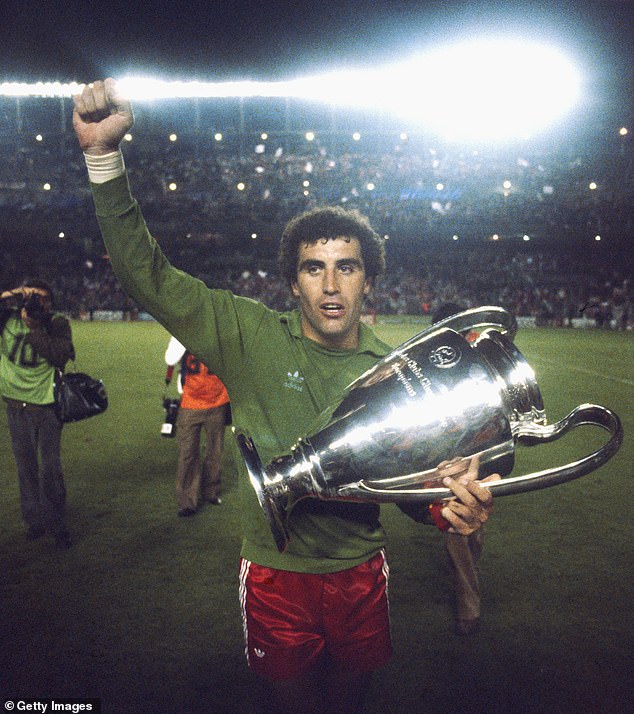 Nottingham Forest goalkeeper Peter Shilton celebrates with the trophy after Forest had beaten SV Hamburg to win the 1980 European Cup at the Bernabau stadium on May 28, 1980 in Madrid, Spain

Shilton, who played for 11 clubs including Nottingham Forest, where he won two European Cups, said: ‘I had two lives, one as a very dedicated footballer, and another where I was addicted to gambling. I didn’t realise I was an addict until I finally stopped. When I was working I was always ultra-professional and nothing would interfere with the football.

‘But when you’re a footballer you have a lot of spare time on your hands after training. It’s easy to sit around and gamble.’

Shilton represented England in three World Cups, and said for most players gambling was a way to keep them occupied during long tours away from home.

He recalled acting as a bookmaker for the England squad in the 1986 World Cup, when Maradona famously scored with his ‘Hand of God’ goal.

When Shilton hung up his gloves in 1997, having competed in more than 1,000 professional matches, he says gambling had begun to rule his life.

He said: ‘It’s so easy just to get on that buzz and get hooked. When you gamble you are on a high whether you’re winning or losing. Getting that high to me is what gambling is about, you’re in a world of your own. Shilton said that his problems gravely worsened when online gambling came along, and he set up an account with Betfair in around 2005.

‘For the first time I could sit on a computer and bet,’ he said. ‘I just had one account with Betfair. But you could gamble into the early hours of the morning. If I got on a roll I would stay up, on odd occasions to 2am or 3am.’ 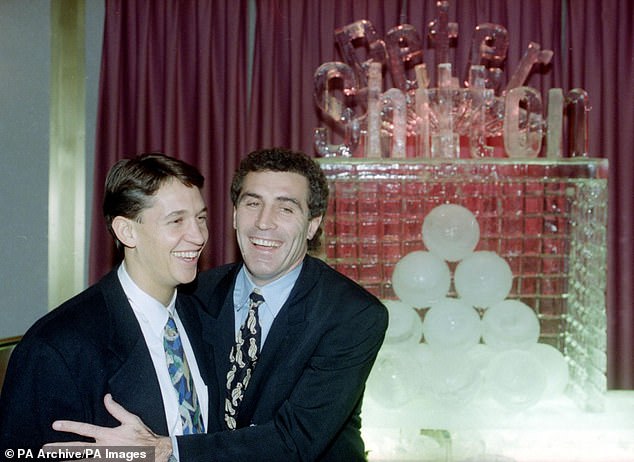 The couple married in 2016 and live together in a bungalow in West Mersea, Essex.

Shilton finally gave up gambling in 2015 with the support and encouragement of his wife.

He called up Betfair to ask them to cancel his account – only for them to try and entice him to stay.

He said: ‘It was thanks to Steph I was able to give up. The penny suddenly dropped – I thought: “I’m not winning and I never have won … why should I put myself through this and risk losing Steph?”

‘I’ve won at most things in my life, in terms of my career, but I’ve never won at gambling. What’s the point of me carrying on? I’m just losing.’

Shilton, who has been plagued by debts from his 45 years of gambling, has now not placed a wager for five years. He said: ‘I could be a lot richer than I am now, but I have never been happier. I will never have another bet again in the rest of my life.’

Last Thursday, Shilton and his wife had a meeting with sports minister Nigel Adams and arts minister Helen Whately to discuss the steps needed to tackle the menace of problem gambling.

They are also working with the charity Gambling with Lives, which was set up by bereaved parents.

Shilton said: ‘I’m now 70, I could just go out quietly. But I just thought I should try and make a difference. Gambling caused me a lot of problems in my life – financial and emotional. I want to help, just one person would be enough.

‘I want people to know there is light at the end of the tunnel. You can stop, that’s my message to anyone who is struggling. I understand what you are going through and it’s never easy, but with the right help you can stop.’ Shilton said there should be stricter regulations around betting, adding: ‘What’s frightening is the amount of new methods and games cropping up. The gambling epidemic can only get worse.

‘I used to be able to detach a little bit, and wouldn’t bet if I was on holiday. But these days it’s on your phone so you can be sat on a beach placing a bet.’ Shilton said a ban on credit card betting, which was announced last week, was a ‘huge step forward’.

But he added: ‘I would like to see gambling education rolled out nationally. I don’t see any difference between that and drugs and sex education.’ He also called for an end to the pervasive advertising and incentives that keep gamblers betting. ‘There are more and more incentives. I used to get a hamper at Christmas from Ladbrokes, when I told a friend of mine – they said, “Well you’re not winning then are you?”’ he said.

Shilton said he hoped to work with the Professional Footballers Association to raise awareness of gambling within the game.

He and his wife were shocked by the story of Mr Keogh, who was 34 when he took his own life in 2013.

He had played for amateur side Headingley FA and secretly accumulated £55,000 in debt from online gambling.

Gambling addiction has been linked to self-harm, depression and anxiety and causes two suicides a day in the UK.

Shilton received no fee for this article. A donation has been made to Gambling with Lives.

Wife quit job to save him from addiction 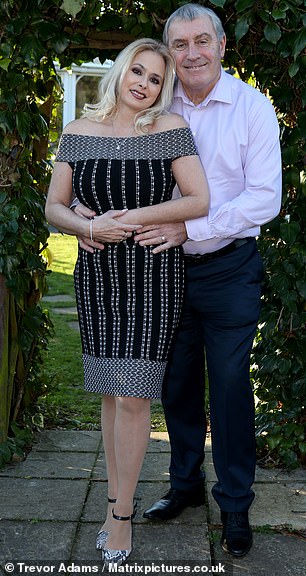 Peter Shilton and his wife Steph are pictured at home in West Mersea, Colchester, Essex

Steph Shilton emailed Betfair six years ago begging them to cut off her husband Peter’s account – but says they failed to act.

She was shocked by the grip gambling had on the football legend when she met him in 2012, and embarked on a mission to get him to quit.

She left her job to help him through withdrawal symptoms, and will next week meet Government ministers to discuss ways to help other addicts.

‘It was heartbreaking to think this national treasure, this wonderful football icon, had this problem,’ she said. She decided to become an ‘investigator’ and rifled through the footballer’s bank statements to uncover the scale of his addiction.

Mrs Shilton, 51, who worked as a manager in NHS primary care for 20 years, said: ‘It was a chronic illness and I knew he needed me. I looked at it as a medical condition, just like a drug addiction.’

In 2014, she emailed Betfair, ‘begging and pleading’ with them to close her husband’s account. But she said they replied claiming they were unable to take any action because of data protection rules.

‘I am so angry at the way they treated him, and the fact I made them aware of my concerns but they ignored my plea,’ she said.

She was forced to try other tactics, including separating herself financially.

‘I told Pete for a long time that I didn’t have a credit card when I did,’ she said. ‘I told him I had lent a friend my savings, I said anything so I didn’t feed him the drug which is money.

‘A lot of men find it hard to seek help or open up about their financial disasters. I kept reiterating that he could tell me anything. I also tried to replace the mentality of winning with that of losing, calling the Racing Post the Loser’s Post.’

In 2015, three years after they got together, the former goalkeeper placed his last bet.

Mrs Shilton said: ‘I remember the day where he did give up. He said “I’m losing, and I’m worried I’m going to lose you”. I said, “You’re never going to lose me, but we’ve got to move on”.’

Shilton then picked up the phone to Betfair to cancel his account. Stopping gambling caused three months of withdrawal symptoms including sleepless nights, mood swings and irritability.

Mrs Shilton said: ‘I gave up work to commit to helping him. I wanted him so much to overcome it that giving up my career was unquestionable. Each day we went on long walks.

‘It took me about a year to stop worrying, I was still checking his laptop and throwing away the racing pages in the newspaper.’

She now hopes to return to work in the NHS, and is determined to help other families struggling with gambling.

She will meet health minister Nadine Dorries next week to discuss becoming involved in the 14 NHS gambling clinics around the country.

She said: ‘It is so right that the NHS look after the addicts, but the public should not foot the bill. Gambling firms must take their responsibility.

‘GPs also need to get on board and be educated far better on gambling addiction.’

Mrs Shilton added: ‘As long as you love each other, you will pull through. We now have a second life. We have disposable income and can go on nice weekends or nice meals.’

A Betfair spokesman said: ‘We cannot publicly comment on individual customer accounts. Over the past few years we have significantly strengthened our responsible gambling practices, including limit-setting and other tools, and have invested in technology to help us proactively identify and engage with customers who may be at risk.’

The Shiltons are supporting the charity Gambling with Lives which was set up by bereaved parents who have lost children to gambling addiction.