Property sales across Britain were down by more than a third in March compared with a year earlier, according to new data from HM Revenue & Customs.

HMRC said year-on-year comparisons should be treated with caution because a year earlier many buyers had been rushing to beat the stamp duty holiday deadline.

The stamp duty holiday was originally due to end in March last year, but was extended in the March 2021 Budget.

There would, however, have been many house sales already lined up to complete in March last year before the announcement of the extension was made.

This meant sales which may otherwise have taken place later on were bunched up, HMRC said.

Andrew Montlake, managing director of Coreco, said: ‘The stamp duty holiday has distorted the data so it was inevitable that transaction levels in March were down fairly significantly on the same month last year.

‘To make matters worse, there is an extraordinary lack of stock. Transactions need buyers and sellers and there is a distinct lack of the latter.

‘Moving forward, households face countless headwinds during 2022, primarily in the form of rising interest rates and soaring inflation, and these are likely to restrict transaction levels. 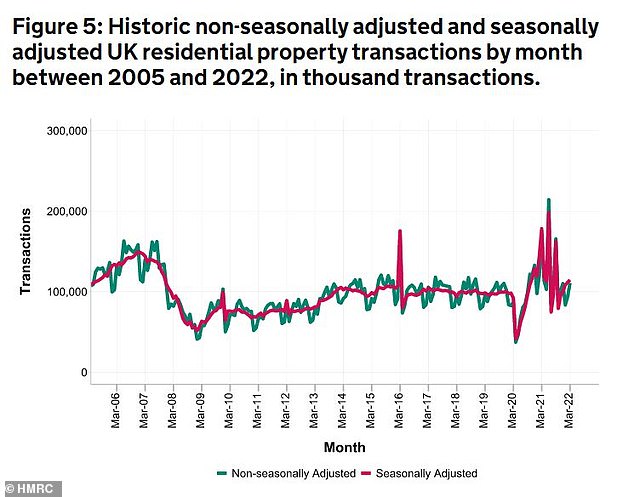 Iain McKenzie, chief executive of The Guild of Property Professionals, said home sales continue to appear to inhabit a ‘parallel world’ when compared against all other economic indicators.

He added: ‘Home moves are down year on year, but only because of a rush to buy in March last year caused by the impending end of the popular stamp duty holiday.

‘The industry continues to see a lack of properties on the market, which is pushing up prices across the board.

‘Demand remains high, and the market looks likely to keep moving upwards as it continues to ignore all the uncertainty in the rest of the economy.’

Kevin Roberts, a director of Legal & General Mortgage Club, said: ‘Despite the pressure on borrowers caused by the rise in the cost of living, demand remains high and the overall outlook for the market is strong. This is another clear reminder of the resilience of the current housing market and its ability to weather difficult conditions.

‘Even as the market experiences a healthy spring, the more complicated conditions mean that the role of advice is now more important. Borrowers may well need more support and reassurance to find the right mortgage for their needs. This is an opportunity for advisers to really demonstrate the scope of their expertise and add value, during what will be a pivotal time for their clients.’ 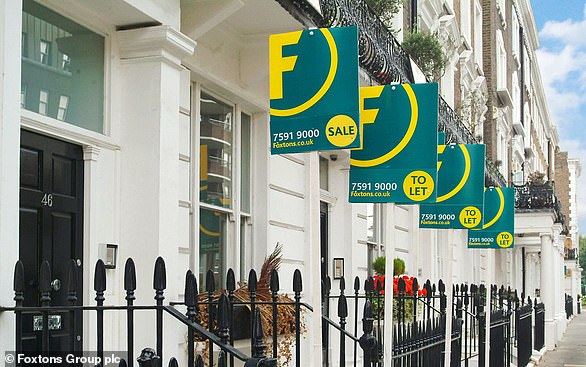 Foxtons said it performed in line with expectations in the first quarter, reporting a rise in lettings revenue, but a drop in sales.

In the three months to 31 March, the London-based estate agency’s lettings revenues grew 21 per cent from the same period a year ago to £17.9million, while sales revenues slipped 9 per cent to £9.6million.

Meanwhile, revenues from its mortgage broking business rose by 5 per cent to £2.4million. That took total revenues up 8 per cent to £30million.

The group said: ‘The London rental market remains characterised by an excess of demand over supply, with increases in rental prices and growth in renewal revenues more than offsetting a reduction in new transaction volumes which were constrained by the supply of available rental stock.’

In sales, buyer demand was strong and Foxtons said it delivered market share growth ‘in a positive trading environment’.

It noted that the first quarter of last year benefited from higher transaction volumes ahead of the original stamp duty relief deadline of 31 March 2021.

Boss Nic Budden, said: ‘I am pleased to report we have had a good start to the year, with all areas of the business trading in line with our expectations.

‘The lettings business has performed strongly, growing both organically and through the contribution from the D&G acquisition. Our sales business has continued to deliver market share growth and entered the second quarter with a healthy under offer pipeline.’

Analysts at Edison, said: ‘Despite the robust Q1 revenue performance and the promising start to Q2, we are maintaining our full year operating profit estimate of £10.9million which does not include any benefit from the M&A investment reported previously.

Meanwhile, analysts at Numis, said: ‘Overall, this is a solid statement and the 8 per cent revenue growth reported in Q1 compares to our FY22 forecast of 3 per cent.

‘We therefore think that the Q1 update is supportive of our full year forecast and we continue to argue that the shares are undervalued based on the recovery potential of the London residential market, which remains highly depressed compared to historic comparatives.’