Strike a (masked) pose! Employee at London’s G-A-Y nightclub cheekily upstages his BOSS with flamboyant voguing during a live TV interview on the 10pm curfew

An employee at G-A-Y succeeded in upstaging the historic London nightclub’s owner during a live television interview – by striking a series of flamboyant poses in the background.

Club owner Jeremy Joseph was filmed outside his West End club on Monday evening talking to BBC London News about how he’s mounted a legal challenge against the Government’s 10pm curfew – but, thanks to the impressive voguing going on in the background, it was almost impossible to follow what he was saying, viewers said.

As Joseph, who owns three venues in the capital, chatted to reporter Sonja Jessup, the blonde-haired employee set to work showing off his best moves.

Oblivious to the subtle shimmies and hands-on-hips going on in the background, the cameraperson continued to zoom in, much to the delight of viewers watching at home.

Stealing that limelight: the door person at G-A-Y successfully upstaged his boss, owner Jeremy Joseph, with a series of killer moves

The masked employee brought out his voguing A-game, as his co-worker tried to stifle a laugh 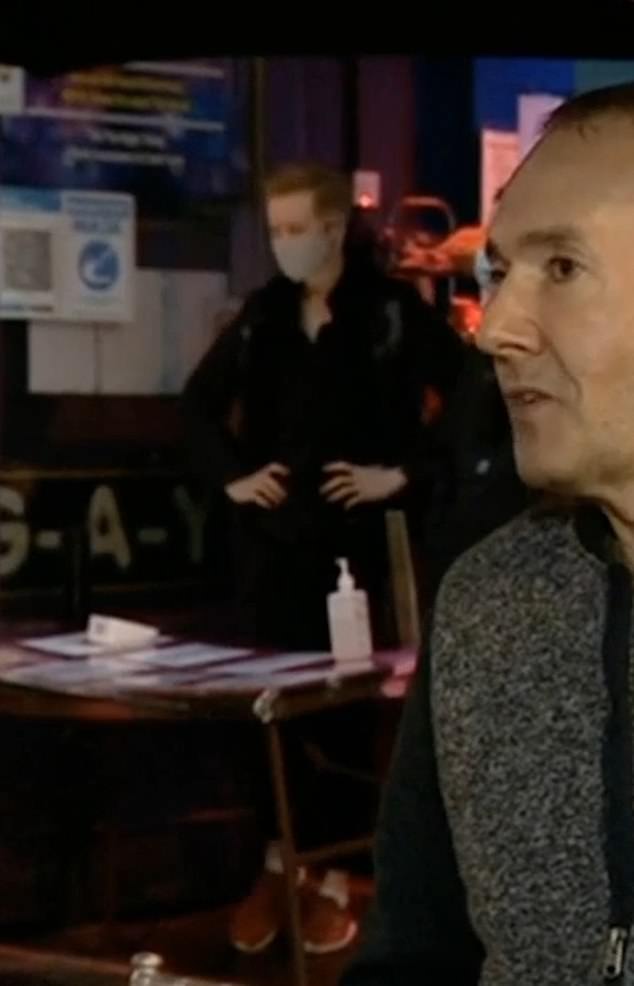 Yas queen! The blonde worker also showcased how to put on make-up during the live TV interview 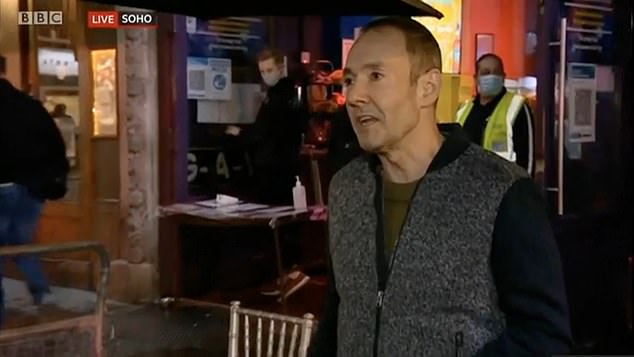 This is a photoshoot: as the interview rolled on, the employee showed no signs of letting up, and the cameraperson remained oblivious 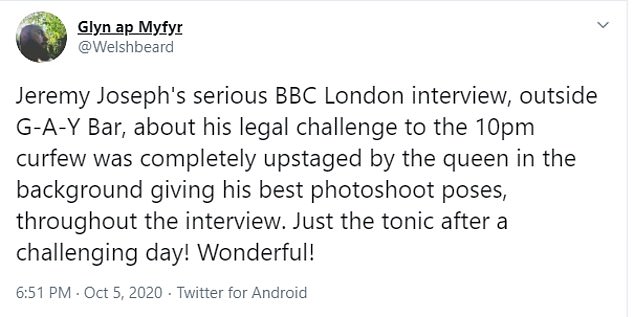 The door employee proceeded to bring out his finest moves including pretending to apply make-up and walking away only to offer sultry look-back.

One viewer, @Welshbeard, penned on Twitter: ‘Jeremy Joseph’s serious BBC London interview, outside G-A-Y Bar, about his legal challenge to the 10pm curfew was completely upstaged by the queen in the background giving his best photoshoot poses, throughout the interview. Just the tonic after a challenging day! Wonderful!’

@SarahMannComedy wrote: ‘Someone get the door guy working G-A-Y a medal. His voguing in the background of the BBC London news has made my evening.

However, some felt that the posing was distracting from Joseph’s series message. The club owner has criticised the government’s decision to close pubs, bars and restaurants by 10pm.

He said: ‘The 10pm curfew which has now been in place for the last two weeks and has been detrimental to the hospitality sector, including G-A-Y, makes absolutely no sense. 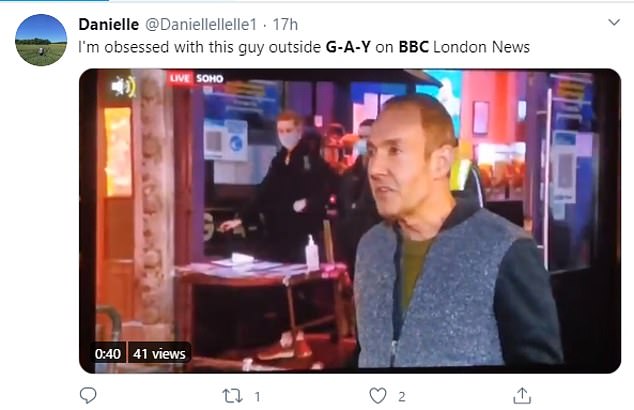 ‘It does the opposite of protecting people by pushing them onto the street at the same time. They are going from being safe inside venues with staggered closing times to unsafe on overcrowded streets and overloaded public transport.’

The G-A-Y entrepreneur added: ‘This Government has failed to show why the 10pm curfew was put in place and has published no scientific evidence to substantiate its implementation.

‘It seems to direct the blame for this action on the sector, consistently treating the night time Economy as a scapegoat when, in fact, we have years of operational experience of keeping customers safe, and have spent substantial time and effort making sure our venues are Covid secure.’