Emotional moment world No.2 Ons Jabeur COLLAPSES in the players tunnel after her making 50 unforced errors in massive upset to crash out of the Australian Open

Footage has surfaced of a shattered Ons Jabeur collapsing in the players tunnel after her shock loss at the Australian Open on Thursday night.

The second seed, 28, made an uncharacteristic 50 unforced errors, losing in three sets to Marketa Vondrousova from the Czech Republic.

Moments after it dawned on the 2022 Wimbledon and US Open finalist she was out of the tournament, Jabeur was on her haunches as the missed opportunity on Rod Laver Arena became a reality.

Jabeur wasn’t at her best, committing 18 unforced errors in the first set alone.

She composed herself to win a tight second set 7-5, but lost her rhythm in the third.

The result means the Grand Slam drought continues for the Tunisian, whose best result at Melbourne Park is the quarter-finals in 2020. 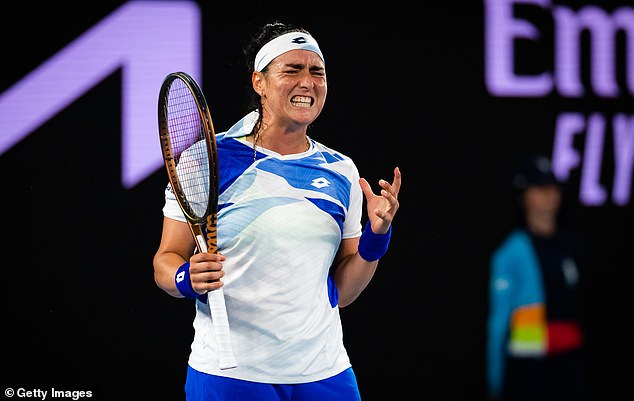 The second seed, 28, made 50 unforced errors, losing in three sets to Marketa Vondrousova from the Czech Republic

The gripping contest finished just past 1am AEDT in Melbourne, which didn’t sit well with Vondrousova.

‘I think for the body also, I don’t think it’s healthy to play at 1am,’ she said.

‘Also, like, if you are playing three sets, it’s crazy.

At this level, you have to be ready for every point. I don’t think it’s very healthy, but it’s night session, so you have to prepare for it.’ 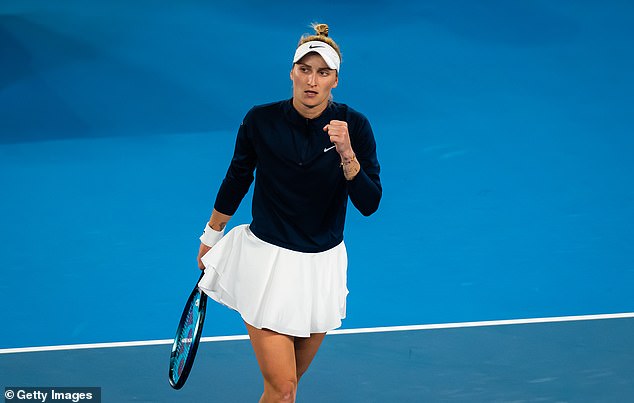 She added it had been a ‘very crazy’ week of weather and waiting around the player area amid ongoing delays and scheduling dramas.

‘I was also tired, but I think she was too,’ Vondrousova said.

Runner-up to Ash Barty at the 2019 French Open, Vondrousova will take on fellow Czech star Linda Fruhvirtova in the third round.

The 17-year-old Fruhvirtova advanced with a straight-sets win over Australian wildcard Kimberly Birrell.