A 92-year-old care home resident saw her son for the first time in months through a screen put up in her care home as the country’s second nation-wide lockdown continues.

Freda Maddison – a resident at Eothen Homes in Wallsend, North Tyneside – had not been able to see her son Stephen since the spike in coronavirus cases led to new restrictions around care home visits.

Mr Maddison has not been able to hug his mother since February.

But on Friday, they were able to meet again – while still following lockdown rules – thanks to a special visiting booth set up at the home.

Freda was brought into the lounge and sat outside the home’s ‘Butterfly Booth’, while her son arrived through a separate door and sat inside the pod.

Heartwarming footage shows the pair speaking to each other and touching hands through the screen.

Ms Maddison, who has Alzheimer’s and has been at the care home for nearly a year, said it was ‘absolutely wonderful’ to see her son.

She said it was ‘like a lost treasure come to life.’

Ms Maddison said it was strange seeing him inside the booth but added: ‘It’s better than nothing.’

She said she told her son: ‘I always think of him. And he said the same to me.’

Mr Maddison, 56, of High Heaton, said: ‘It was very good. Her eyesight is failing sometimes so she had to get a bit closer so she could see who it was. 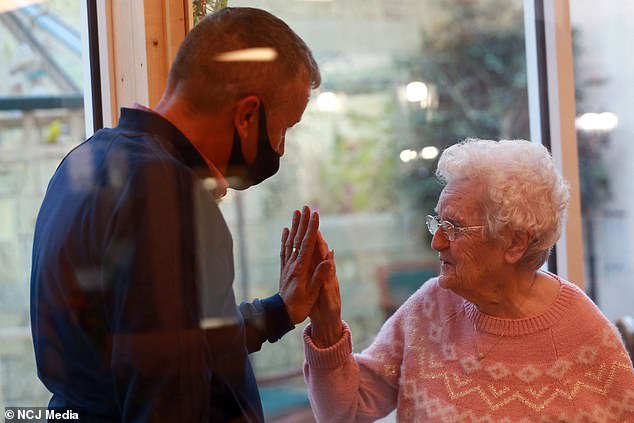 Ms Maddison – a resident at Eothen Homes in Wallsend, North Tyneside – had not been able to see her son Stephen (pictured during their meeting) since the spike in coronavirus cases led to new restrictions around care home visits 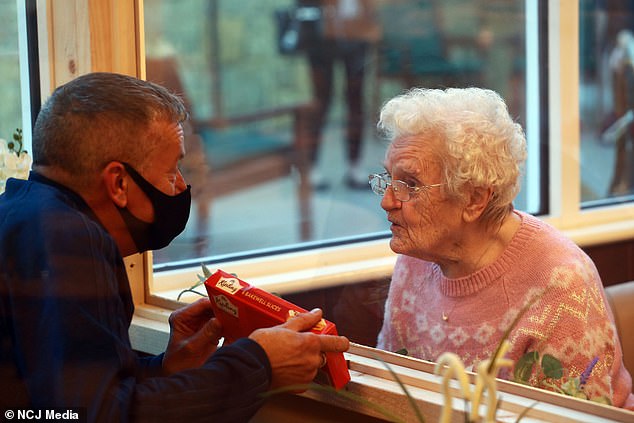 On Friday, they were able to meet again (pictured) thanks to a special visiting booth set up at the home

‘It was nice being able to sit close to my mam. There was a screen in front – but if you put your hand on the screen, you can feel the warmth.

‘It’s a good move from the home to do this. I think it’ll be very good for the residents and their families. It’s very safe.’

Christine Henderson, manager of the care home, said: ‘In September, new restrictions were brought in and we could not have visitors. We kept life as normal as possible and carried on.

‘But now that the rules have changed, we can allow visitors again. We set up this booth so that residents could see their family in a safe way.’

The affect of the UK’s second lockdown on pensioners’ mental health has become a topic of great concern as the country sees a second wave of the virus.

The first introduction of draconian social-distancing rules left countless numbers of the nation’s most vulnerable isolated for months on end. 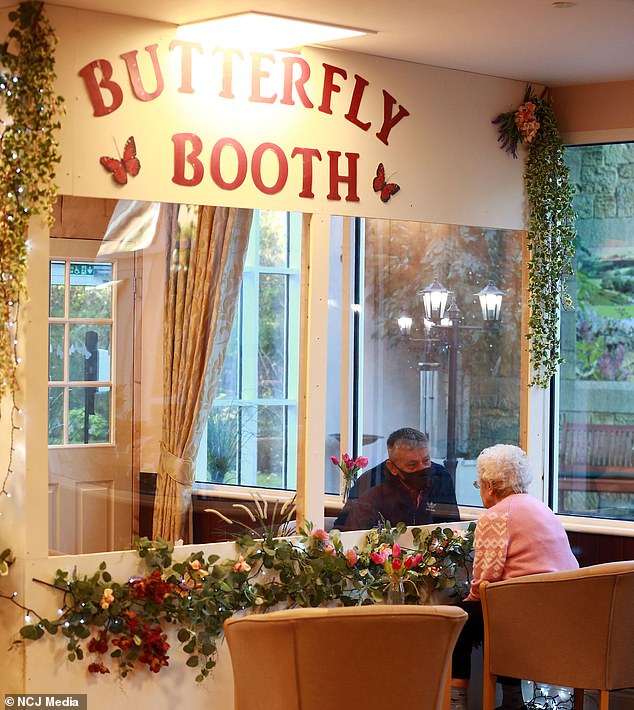 Ms Maddison said it was strange seeing him inside the booth (pictured) but added: ‘It’s better than nothing’

And ahead of the November 5 restrictions, Health Secretary Matt Hancock was warned that banning care home visits again would breach ‘fundamental human rights’.

But concerns about isolation are mirrored by an increased virus risk.

More than 20,000 care home residents died from Covid-19 during the first wave of the pandemic and official figures show the number of people dying from Covid in English facilities doubled in a fortnight in October.

Experts say the decision to discharge thousands of untested hospital patients into care homes at the peak of the spring crisis was partly to blame.

And last month it was revealed health bosses are pursuing the same catastrophic policy again, in an attempt to free up NHS beds to protect the health service from being overwhelmed this winter.

Care home visits must be OUTSIDE or through a window during England’s second coronavirus lockdown, Government says

Care home visits must take place outside or through a window or screen during England’s second coronavirus lockdown, the Government said on Wednesday.

‘Ad hoc’ in-person visits will not be allowed but homes will still be able to find alternative ways for relatives to meet up with residents.

During the first wave in the spring, visits had to be banned completely because the virus was ravaging the care sector and officials feared they could not be safely organised.

Care organisations and Sir Keir Starmer, the leader of the Labour Party, have campaigned for visits to continue to be allowed during the second lockdown to avoid leaving residents isolated.

In its guidance, issued less than 12 hours before new lockdown measures are introduced, the Department of Health suggested that homes could set up designated visitor ‘pods’ with screens, host visits through windows at a distance, or allow one-on-one meetings outdoors.

Failing that, it said, they should try to encourage more virtual visits.

But critics said the rules ‘miss the point’ and would not work well for people with dementia, who make up a majority of care home residents and of whom many would not understand or cope with the rules.

Outdoor visits will be out of the question for most as the autumn weather turns, with rain and plummeting temperatures now the norm across the country.

Martin Green, chair of Care England, said it was disappointing that a better policy had not been devised during the months since the first lockdown.

He said: ‘We are really upset that a proper policy has not been published in time when a second lockdown was always on the cards.’