President Macron, 43, is happy he’s getting fatter because it makes him look ‘more mature’

French President Emmanuel Macron is glad to be getting fatter because it makes him look ‘more mature’ and proves he is recovering from Covid-19, his aides said today.

They made the unusual admission after observers noticed a rapid increase in the size of the 43-year-old head of state.

Macron has noticeably put on weight since December, when he contracted Covid-19 and had to go into isolation before being given the all-clear. 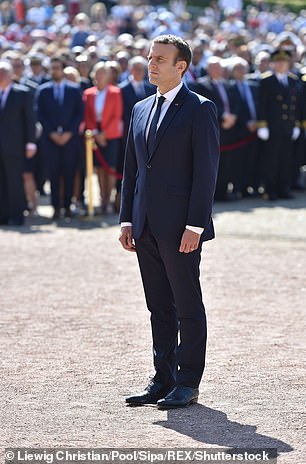 French President Emmanuel Macron is glad to be getting fatter because it makes him look ‘more mature’ and proves he is recovering from Covid-19, his aides said today. Macron pictured in January this year, left, and in 2017, right

‘This is a positive thing,’ an Elysée Palace spokesman told Challenges, the Paris business magazine.

‘It’s the first proof that the President has recovered well from Covid, and that he’s in shape to tackle everything else.’

The spokesman added: ‘In the photos, these few extra pounds give him density and maturity.’

But at 5ft 9ins he follows in a recent line of relatively short presidents, and so is not best placed to disguise weight gain.

Nicolas Sarkozy, his diminutive conservative predecessor, famously went on a severe diet and started exercising rigorously when he got fatter in office, but then eased up after collapsing while out jogging.

Sarkozy, now 66, originally took up the draconian diet on the advice of his third wife, the former supermodel Carla Bruni, who is 13 years his junior.

President Macron’s super slim wife Brigitte Macron is 25 years older than him, and has also had coronavirus, while not suffering any serious symptoms.

The couple enjoy low-key health regimes, including lots of walking and swimming privately in the summer.

Despite regular negative social media comments about their appearance, the Macrons have raised few objections.

In an interview last month, Mrs Macron said: ‘The president and I are frequently attacked on the networks. Who are these people?

‘It’s nothing. The whole world decides what the wife of a president has to do. If I listened to them, I wouldn’t get up in the morning!’