The tennis sensation, 18, who became the first British woman to win a grand slam title for 44 years when she won the US Open earlier this month, paired her Erdem ensemble with Tiffany jewels at a British Vogue and Tiffany & Co. bash at The Londoner Hotel.

She announced on Instagram that she had been named House Ambassador for Tiffany & Co., meaning she will support the brand by wearing its pieces.

She wrote: ‘Very excited to join the iconic @tiffanyandco family as a House Ambassador. Being able to wear these special jewellery pieces over the past few weeks has been an honour!’

And according to popular culture and brand expert Nick Ede, Emma’s Tiffany deal is likely to be worth over £2million.

‘As LVMH have taken over the brand they are looking to attract a new audience and Emma is the perfect person for this,’ he added. ‘She exudes elegance and style but has an edge that will appeal to a new demographic, while not alienating the existing one.’

Tennis sensation Emma Raducanu, 18, cut an elegant figure as she stepped out in a glimmering white ensemble for a London Fashion Week event tonight 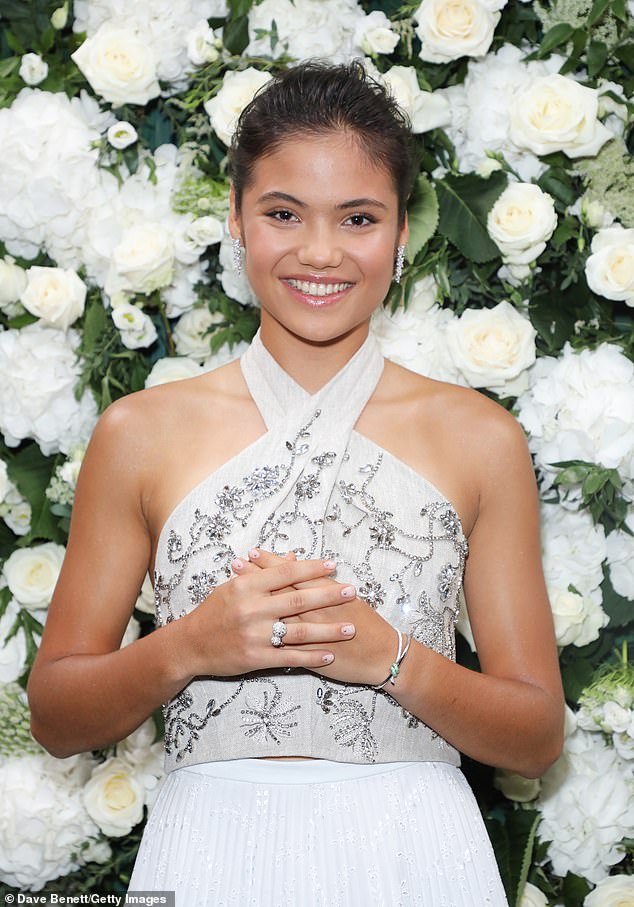 Radacanu has been heralded as a ‘sponsor’s dream’, and is on course to become the highest earning female sports star of all time. It was also reported that she laid the groundwork for her potential earnings aged 17, registering Harbour 6 Limited to manage her finances.

At last night’s event Radacanu looked chic in a halterneck sequin crop-top which she paired with a trendy white pleated midi skirt for the occasion.

Meanwhile the teen swept her hair into a bun, opting to wear a collection of glittering jewellery for the event.

Her return home comes after a whirlwind week following her incredible triumph in New York.

In a sweet photoshoot last week, Ian Raducanu lifted her arm victoriously aloft and then hugged his 18-year-old daughter – but her mother Renee did not come out to pose with the sports superstar.

Emma told reporters outside her home: ‘It’s a great feeling to be home. I’ve been away for seven weeks so it’s nice to be back. It was nice [to hug her parents]. Nice to see them again.’

The smiling tennis star also said she was looking forward to relaxing but hasn’t thought about any parties or reunions with friends. She said: ‘I haven’t thought of anything [going forward]. I’m just enjoying it and relaxing and recovering. We will make some plans.’ 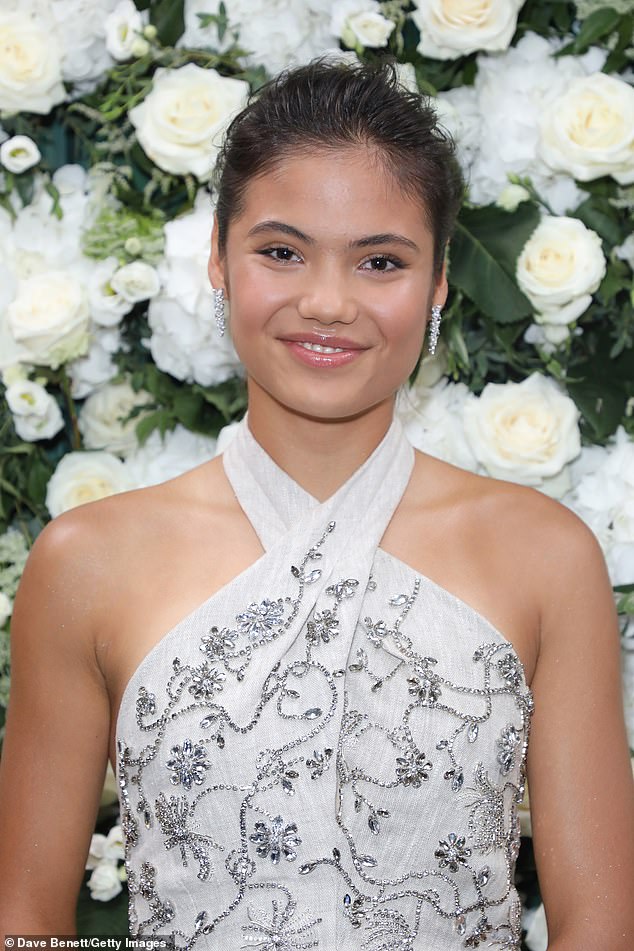 Meanwhile the teen swept her hair into a bun, opting to wear a collection of glittering jewellery for the event

Her proud father said he was relieved to have her home and happily hugged Emma as they posed for photographers outside the family property. Her mother was also thought to have been at home, although she wasn’t seen in photos.

Emma arrived in a black Range Rover, which was followed by another filled with suited security guards.

The reunion comes after it emerged Emma trademarked her name within hours of her US Open win in her first steps to becoming the ‘first billion-dollar sports woman’. UK-based lawyer Anthony Brierley applied to safeguard the words ‘Emma Raducanu’, ‘Emma’ and ‘Raducanu’ shortly after the 18-year-old’s victory, reports The Sun.

Emma, whose parents both work in the City of London as currency market traders, has admitted to still being on ‘cloud nine’ after her stunning victory and plans a few days of rest before she is back playing tennis again. 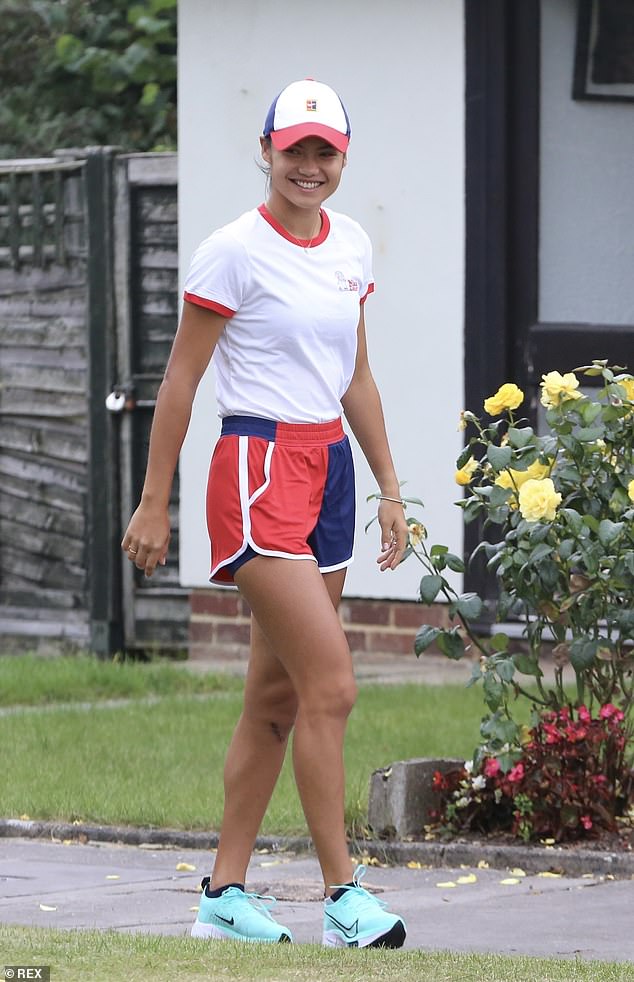 However, she also shared her desire to get back on the court and is expected to appear at BNP Paribas Open in Indian Wells next month.

She said: ‘I have a few days’ rest and recovery (coming up), I think needed after the last seven weeks but then I am straight back to training and hungry to get better and come back out and play some more tournaments.’

It was only Raducanu’s second appearance at a major and the new world number 23 has made headlines across the globe, appeared on various TV channels in the United States and she also attended the Met Gala on Monday in a monochrome Chanel ensemble.

Wearing all black to the NYSE, Emma was with her agent Chris Helliar, the man from IMG tasked with helping her towards becoming a $1billion brand.

MailOnline also revealed she has been spending time with old friend and former British tennis protege Benjamin who is studying in New York. He was seen hugging her in front of one of her new Nike billboards in Times Square. 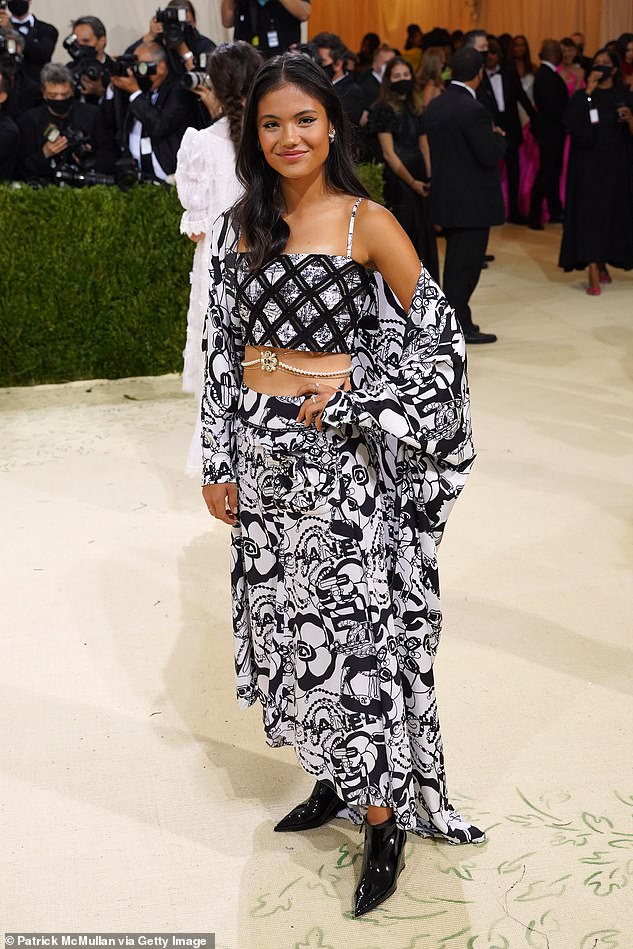 Success: Emma, 18, is the first British woman to win the US Open in singles since Virginia Wade in 1968 and is currently the top ranked British player (pictured in September 2021)

On Tuesday she ticked off another long-term aspiration when she visited Wall Street. ‘I am on cloud nine but so excited to be here on New York Stock Exchange. It was one of the places on my bucket list before leaving New York and I’m just so excited and grateful to everyone who made this possible,’ Raducanu told CNBC’s Closing Bell programme.

‘I have a few days’ rest and recovery (coming up), I think needed after the last seven weeks but then I am straight back to training and hungry to get better and come back out and play some more tournaments.’ 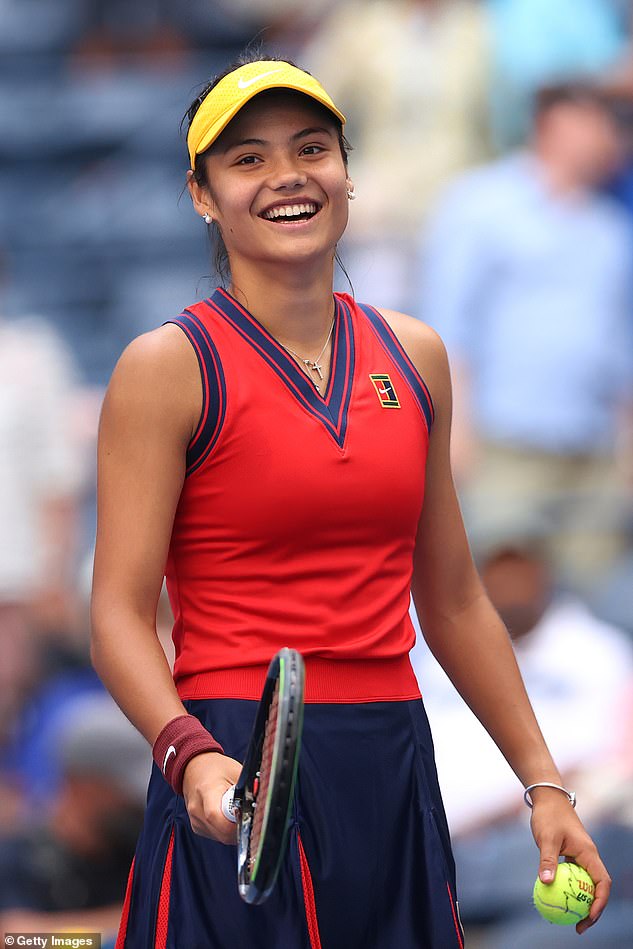 The teenager has been heralded as a ‘sponsor’s dream’, and is on course to become the highest earning female sports star of all time

She is already managed by Max Eisenbud, vice-president of tennis at entertainment giant IMG and one of the most powerful agents in sport.

And Emma’s multi-cultural background, being half-Chinese and fluent in Mandarin, is seen as a big part of her landing some huge deals.

Mr Shalit said: ‘In the space of a week, Emma has become a global phenomenon.

‘I already have her down to become the first US$100 million British female sports star.

‘And if she continues on her current trajectory, she will be worth US$1 billion and be the biggest female sports star in the world.’

Emma was two years old when her Romanian father Ian and Chinese mother Renee moved the family to the UK.

Mr Shalit said: ‘Emma is a sponsor’s dream. She is a mix of Romania, China, Britain and Canada. She is 18 and she is a gorgeous young woman.

‘She is in a gladiatorial individual sport, where she goes in armed only with a tennis racquet.

‘She was a qualifier in the US and had to get through two competitions. It is quite staggering.’

Mr Shalit added that Emma’s tearful fourth round summer exit from Wimbledon after suffering breathing difficulties only adds to her public appeal.

Raducanu only completed her A-levels earlier in the summer, achieving A* in mathematics and an A in economics at Newstead Wood School in Orpington.

The teenager revealed she always had a big interest in the New York Stock Exchange, adding: ‘It is something I have been studying at school, in my A-levels. I just always had a keen interest. My parents were both in finance and to see it live is incredible.’

He said: ‘She has had to overcome adversity after her stumble at Wimbledon. She has the perfect human interest story. Everything about Emma is the perfect storm.

‘Emma comes along at a unique time in our history during the pandemic when people want to feel positivity and happiness.

‘She represents that positivity and is someone we can all celebrate.’

Emma already has a clothing and shoe deal with Nike, a racquet tie-up with Wilson and she appears in the current edition of Vogue magazine.

Her Instagram followers have trebled to 1.2million since she started out as a US Open qualifier three weeks ago.

His negotiations for former world No1 Sharapova, who won Wimbledon as a 17-year-old in 2004, helped her earn £234million on and off court by the time she retired last year.

Weeks after Raducanu sat her exams, the Toronto-born ace shone at Wimbledon, making the fourth round in impressive fashion before she was forced to retire from her last-16 match with Ajla Tomljanovic on Centre Court owing to breathing difficulties.