Emily Ratajkowski showed off her defined abs as she strolled around New York Saturday.

The 31-year-old donned cream toned yoga pants, a crop top and matching sweater as she bought a bouquet of sunflowers in the Tribeca area.

The pants appeared quite sheer, so it looked like the model wore a pair of striped boxers under the slacks to prevent them from revealing too much.

The runway veteran completed the summery ensemble with a pair of dark sunglasses and a chic necklace with amber and diamonds. Her dark locks were brushed into loose layers.

The proud mom recently showed off a set of tattoos she got celebrating her son, Sylvester Apollo Bear, 1.

In an Instagram post stating ‘sly forever ♾,’ the cover girl showed off the new ink on both arms and one foot. 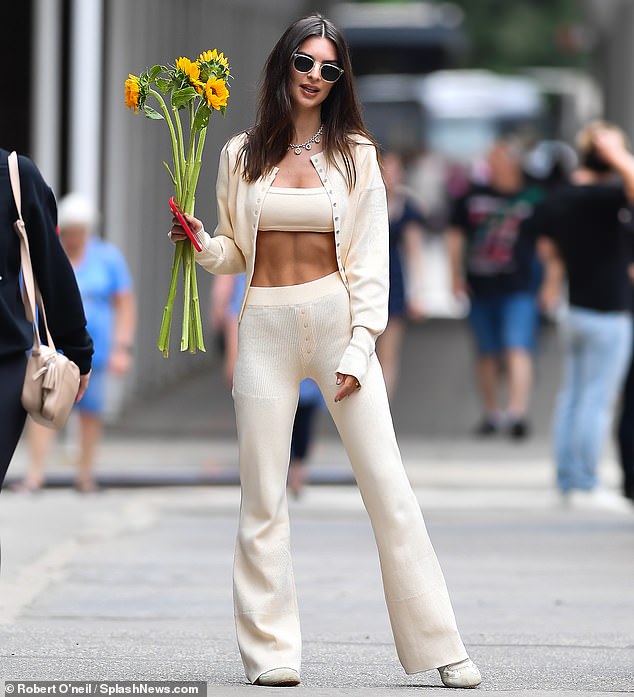 Flowers: The model, 31 donned cream toned yoga pants, a crop top and matching sweater as she bought a bouquet of sunflowers in the Tribeca area

Emily and her husband, actor and producer Sebastian Bear-McClard, 34, welcomed the little one into their family in March 2021.

The couple have been married since 2018.

The avowed feminist and her husband seem to be raising her child in a gender neutral fashion. The tot is often dressed in a variety of colors and prints and has been seen accompanying his mother to reproductive rights marches. 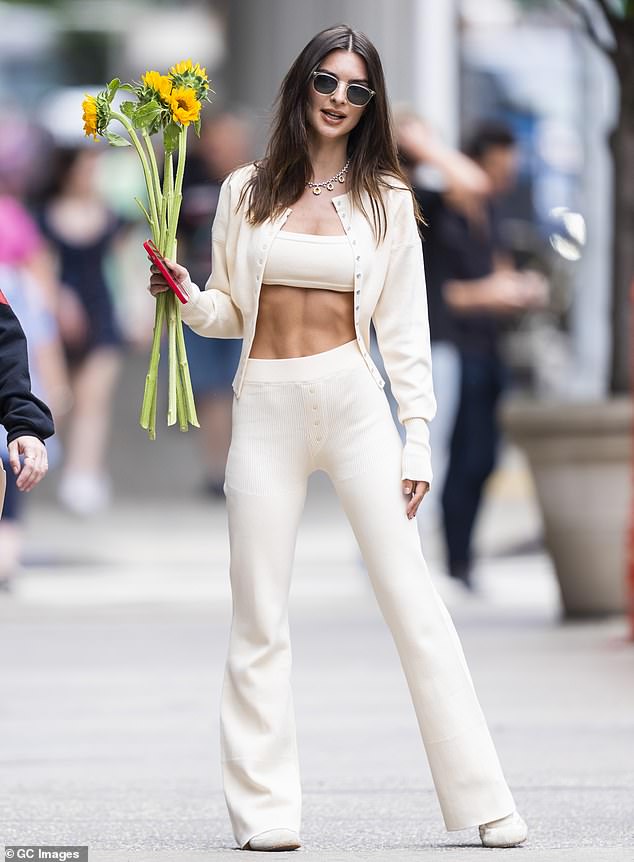 Sheer: The pants appeared quite sheer, so it looked like the runway veteran  wore a pair of striped boxers under the slacks to prevent them from revealing too much

During her pregnancy the My Body author wrote an essay for the October 2020 edition of Vogue, indicating that when asked if she hoped for a boy or girl, she responded,  ‘we won’t know the gender until our child is 18 and that they’ll let us know then.’

The I Feel Pretty star celebrated her 31st birthday June 7 on the beach at a luxury resort in Mexico.

The busy model and actress has recently completed work on the TV movie Bright Futures, co-starring with Lisa Kudrow, 59, and Home Economics star Jimmy Tatro, 30, in the comedy about a group of young friends transitioning from immaturity to success.