Elon Musk is a genius. We know, because the Beeb’s adulatory three-part life story of the Tesla billionaire tells us so every minute.

Rocket scientists, company execs, ex-wives, parents, journalists and old friends queue up to repeat the mantra: Elon is the most brilliant human being ever.

In case we’re sceptical, archive clips show Musk himself frequently affirming that he is a visionary, while warning of the burden such supernatural intellect confers. ‘You wouldn’t want to be me,’ he told podcaster Joe Rogan, who was drooling with admiration.

Far be it from me to suggest the world’s richest man is a charlatan. But the great thing about claiming to be able to foresee the future is that no one can prove you wrong.

He declares on The Elon Musk Show (BBC) that, over four billion years, life on earth has changed in significant ways just half a dozen times — the emergence of amphibians from the seas, the evolution of early mammals, the extinction of the dinosaurs and so on.

The Elon Musk Show, a three-part series from the BBC, tells the early life of the entrepreneur starting from his days in silicone valley

Now it is about to change again, he says, with the colonisation of other planets. He just happens to be the one man who can make this happen, with his SpaceX fleet and his plans to establish a base on Mars. The alternative, he adds, is the obliteration of humankind. So he’s not only the most far-sighted man who ever lived and the most influential in history, but also the saviour of the world.

But read into the gaps between the sycophantic praises and there’s a different portrait, not of a genius but of an emotional simpleton.

Musk lacks all interest in anyone else — and has no real understanding of his favourite subject, himself. He is devoid of self-awareness.

His second wife Talulah Riley, whom he married, divorced, married and left again, between 2010 and 2016, insisted he is a deeply emotional man.

But he appears to have little control or comprehension of his feelings. Talulah described how he laughed so excessively during a movie that he was rolling on the cinema floor, to the bemusement and alarm of other filmgoers.

At their first wedding, she dressed him as his hero Fred Astaire, in top hat and tails, and asked if there were any extra touches he wanted at the ceremony.

‘A hovercraft full of eels,’ he replied — a puerile reference to a Monty Python sketch. Because he’s so rich, the hovercraft and the eels were provided. Small wonder the marriage didn’t last.

His treatment of the people who work for him appears no better. Former Tesla vice president George Blankenship shook and sobbed as he remembered the stress of meeting Musk’s deadlines. He looked like an abuse survivor.

Compared to Musk, Dr Martin Ellingham (Martin Clunes) is a paragon of tact and empathy — though according to his friends, he has ‘the emotional awareness of a breadstick’. 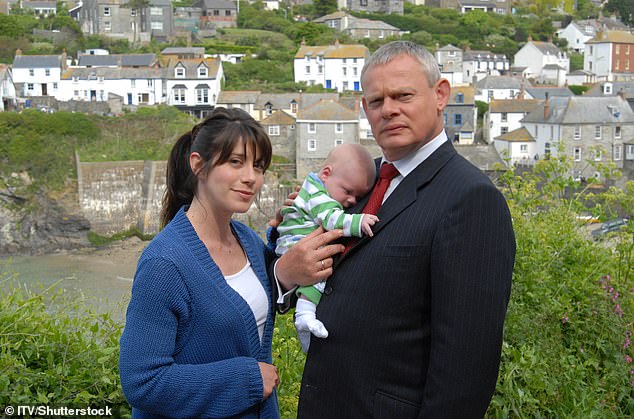 Caroline Catz as Louisa Glasson and Martin Clunes as Dr Martin Ellingham are shown with their baby son. Doc Martin (ITV) is ending after 18 years

This was the penultimate episode of Doc Martin (ITV), which is ending after 18 years, and the Portwenn GP was wrestling with his ambitions.

Offered a role as dean of medicine at Imperial College in London, he tried to think of his wife’s wishes — but was unable to know what he wanted himself, until she helped him untangle his feelings.

Martin’s glorious tactlessness will be missed. Seeing an old friend, he got her name wrong and was unable to say anything but ‘how are you?’ — even when she reminded him that he’d been best man at her wedding.

He then blurted out a revelation about her husband’s drunken infidelities and during the ensuing row a waitress was somehow set on fire.

Such a simultaneously stupid and clever man will be missed.