The college girlfriend of Elon Musk has raised $165,000 from auctioning off personal items and photos from their time together in order to pay for her stepson’s college tuition.

Gwynne also sold 18 separate photos of her and Musk during their college romance at the University of Pennsylvania, including images of her and Musk eating out and hanging out with friends.

The pair dated for one year in 1994 when they were both resident advisers in the same dorm. Musk broke it off after he graduated and moved to California, with keeping in touch over the phone seeming like a ‘waste of time’ to him, according to Gwynne.

‘We broke up just before he started conquering the world,’ Gwynne said.

One photo from May 1995 shows Musk and Gwynne smiling sweetly on a bench outside the school’s freshman dorms. It sold for $2,733.

Jennifer Gwynne, 48, (pictured) of South Carolina put up personal items and photos from her relationship with Elon Musk in the mid nineties that fetched $165,000 in auction, which she said will go towards her stepson’s college tuition 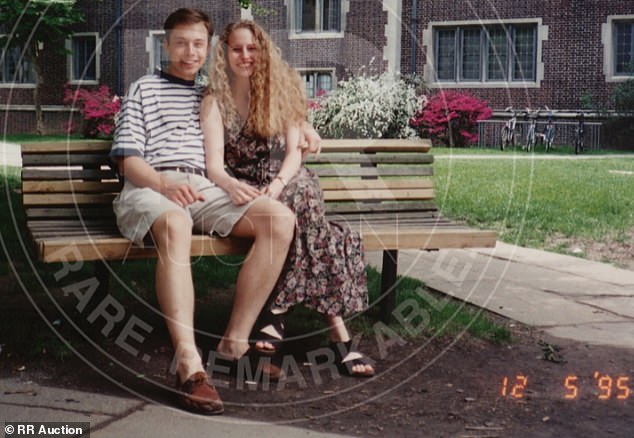 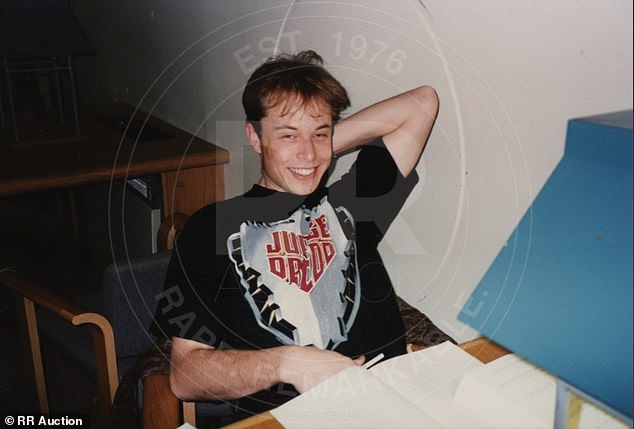 After leaving UPenn in 1995, Musk attended Stanford – but only for two days. Musk recently put this photo – which sold for $9,375 – as his Twitter profile picture 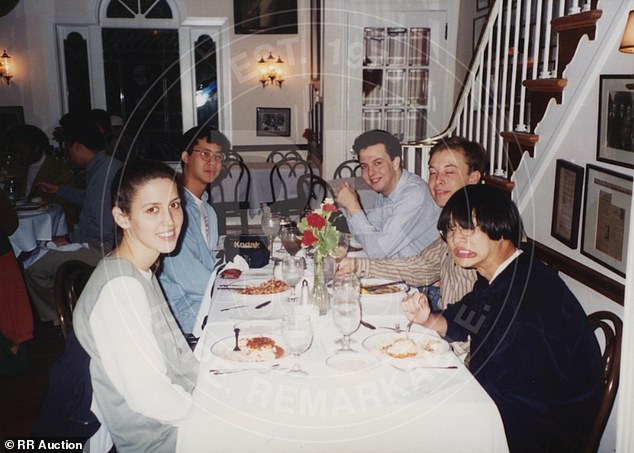 Musk with friends at dinner as a baby-faced college student

The photo was taken by Musk’s mother, Maye, according the auction house RR Auction. She took the photo during a trip to visit her son in Philadelphia.

‘As I remember, the three of us were planning to drive to NYC to see the musical ‘Tommy.’ The whole trip was a lovely gift from Maye,’ Gwynne told the auction company.

‘But as we were getting ready to leave, something on Elon’s car broke. So we ended up spending five or so hours at an auto parts store so Elon could fix the issue himself. He did. We made it to NYC and had a wonderful time.’

Another pic of Musk in brown leather jacket behind the wheel of a BMW, poorly exposed and out of focus, sold for $1,155.

‘We were heading out to see Pulp Fiction on one of our first dates off campus,’ according to a description by Gwynne on the auction house’s website.

Although the tech titan and his college days sweetheart have not spoken since they broke up 27 years ago, Musk updated his Twitter profile picture to one of those of him up for auction in an apparent show of support.

The picture shows a 23-year-old Musk from 1994 in a Judge Dredd t-shirt in a fourth-floor study hall in one of the Quad towers at the University of Pennsylvania. It sold for $9,375.

Gwynne got the idea to auction off the photos and items – which she had carefully stored for many years – after reading about an auction of test papers that Musk had graded with a simple ‘EM’.

She realized the mementos that she had in her possession were of far more value to fans of the world’s richest man. 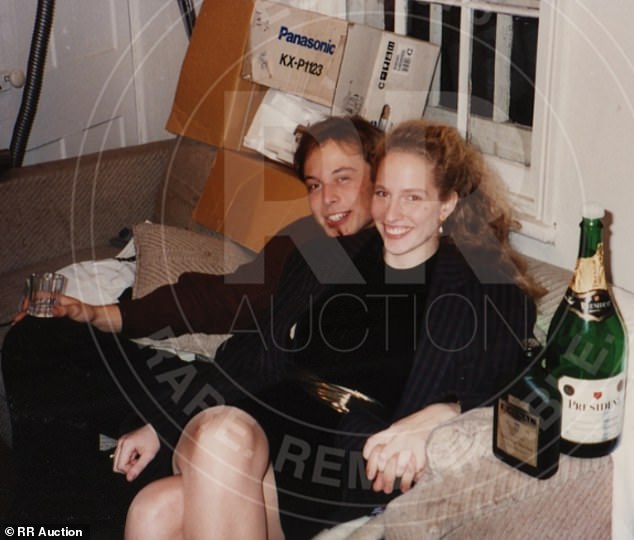 Love’s young dream: Elon and Jennifer together in 1994. She said he only ever wanted someone to ‘be with him’ and ‘support him’ 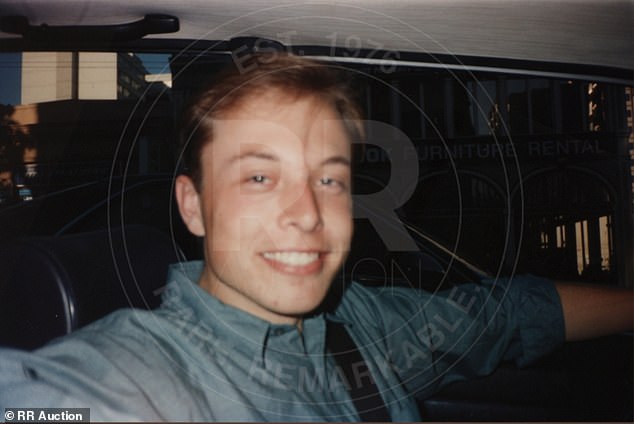 ‘He was very intense… very focused. Even back then, he was talking about electric cars,’ Jennifer says today of her famous first love 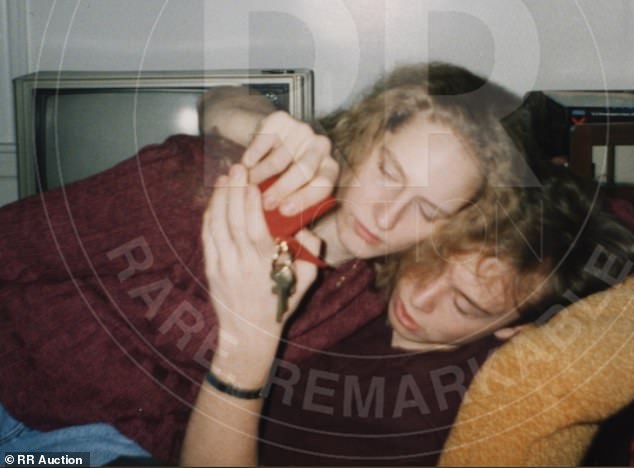 ‘We were physical when we needed to be… but there wasn’t any hand-holding or anything like that,’ she says. This photo sold for $1,969 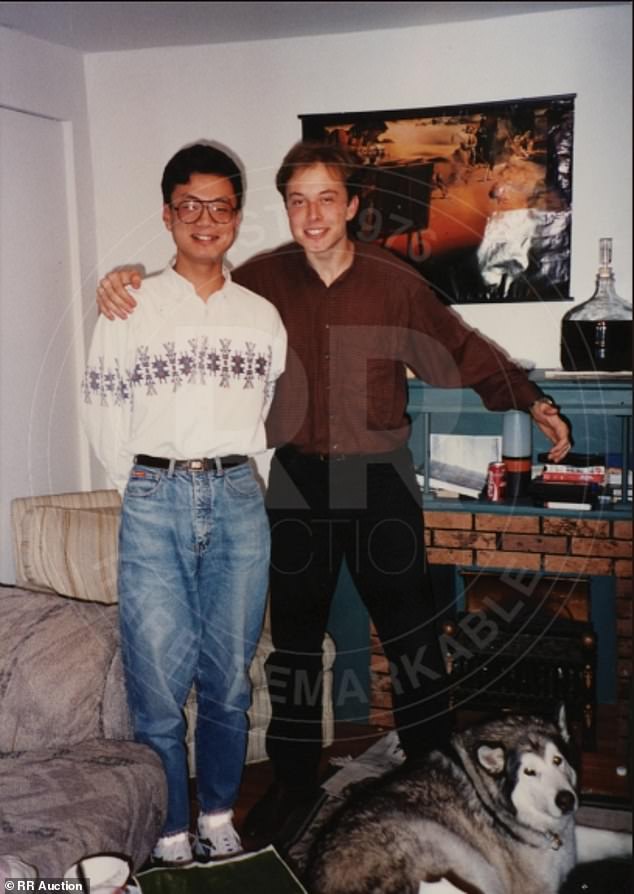 Musk with one of the group’s college friends. Jennifer talks fondly of their road trips and times ‘hanging out’ in their dorm

Gwynne, who is now married with a stepson and living in South Carolina, told DailyMail.com that their romance was a ‘sweet’ one but was lacking in affection or ‘PDA’ – because Elon largely resisted both.

They broke up when he moved to Palo Alto in 1995, around the same time he became serious with his first wife, Justine, whom he’d also been seeing behind her back, she says.

‘We met in the fall of 1994. I was a junior and he was a senior… we were in the same dorm and we worked together.

‘His shy nature attracted me at first… he used to be my type,’ Gwynne said. She described Musk as ‘sweet, kind, smart and engaging.’

Then a budding entrepreneur bursting with ambition and ideas, she said she ‘always knew’ he would ‘go places’.

‘He was very intense, very focused on his studies. Back then he was always talking about electric cars… he was definitely going somewhere. He just saw school as a stepping stone.’

The photos show the pair on road trips, drinking champagne and hanging out with friends. 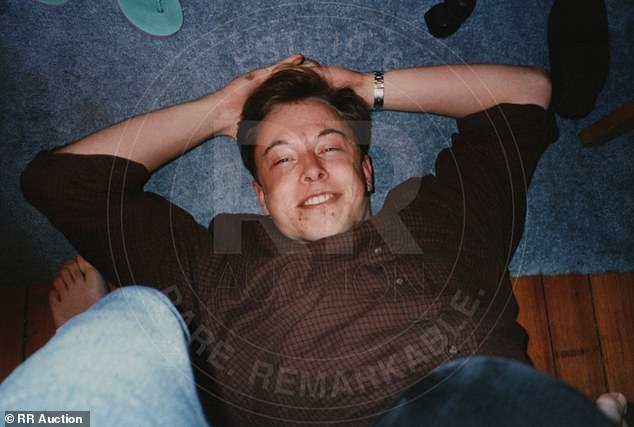 Elon, joking around with friends while at UPenn in the early 1990s – this photos sold for a whopping $11,794 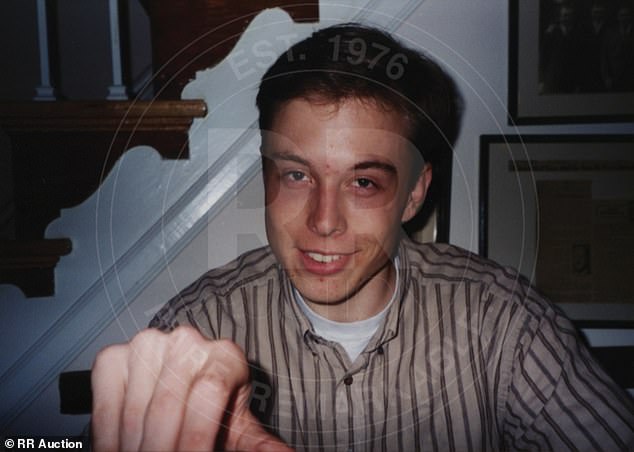 Elon was ‘always going places’, says Jennifer, who said he seemed to view school as a ‘stepping stone’ for where he really wanted to be 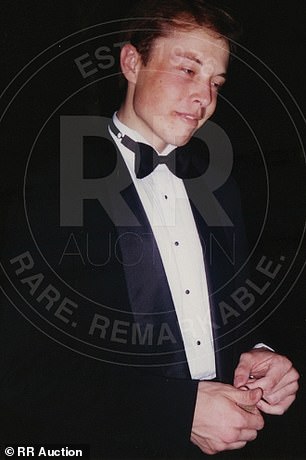 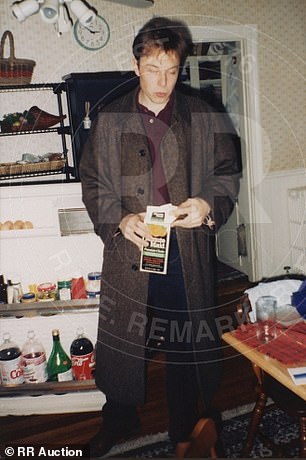 Out on the town and dressing down: A young Elon Musk dressed for a black tie event, which sold for $6,336, and right, with some Minute Maid OJ

In some, Elon appears hunched over an early computer. In others, he is dressed in black tie for formal college events.

While he resisted ‘PDA’, Gwynne reveals that he won her over with a Chinese take-out from a local, off-campus restaurant called Beijing.

‘When he is courting you, you know he is interested, but he wasn’t extremely affectionate.

‘We were physical when we needed to be… but there wasn’t any hand-holding or anything like that.  He liked to be together. He just liked having someone there with him, someone to support him.’

She describes visiting his mother Maye – a ‘wonderful and stunning woman’ – when she lived in Toronto, and also meeting Elon’s siblings Kimbal and Tosca.

‘She came to Philadelphia at the end of the school year and she took us to New York to see Tommy on Broadway.’

She never met his father, Errol, but remembers Elon telling her they didn’t ‘get along’.