Elon Musk has been sued for $258 billion over accusations he ran a pyramid scheme to promote the cryptocurrency Dogecoin.

Keith Johnson, an investor in Dogecoin who says he has lost money after investing in the cryptocurrency, accused Musk, his electric car company Tesla and space tourism company Space X of racketeering for promoting Dogecoin and driving up its price – only to then let the price tumble.

Johnson described himself as an ‘American citizen who was defrauded’ by what he called a ‘Dogecoin Crypto Pyramid Scheme’.

He is asking for his motion, filed in a New York court, to be classified as a class action suit on behalf of those who have suffered losses by investing in dogecoin since 2019.

Since Musk began promoting the virtual currency, investors have lost around $86 billion, Johnson estimates. He would like Musk to reimburse investors this sum, plus pay double that in damages – an additional $172 billion.

Johnson also wants to block Musk and his companies from promoting Dogecoin and a judge to declare that trading Dogecoin is gambling under federal and New York law.

Founded in 2013, dogecoin’s creators say it was intended as an ironic response to two big internet phenomena: cryptocurrencies such as bitcoin, and a meme image of a Shiba Inu dog.

The price of dogecoin traded at just fractions of a cent for most of its existence.

But it saw its value leap at the beginning of 2021, rising to $0.73 in May of that year, amid a buying frenzy that surrounded the GameStop saga and after humorous messages about it from Musk.

On Thursday, however, it was worth less than six cents.

Johnson said he believes Musk increased ‘the price, market cap and trading volume of Dogecoin’ through his promotion of it.

Johnson included tweets from Musk, the world’s richest man who has more than 98 million followers on Twitter, including one promising that SpaceX would ‘put a literal Dogecoin on the literal moon.’

‘Defendants were aware since 2019 that Dogecoin had no value yet promoted Dogecoin to profit from its trading,’ the complaint said. 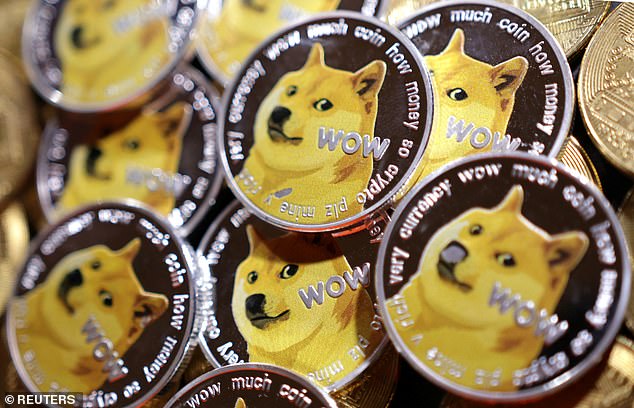 Founded in 2013, dogecoin’s creators say it was intended as an ironic response to two big internet phenomena: cryptocurrencies such as bitcoin, and a meme image of a Shiba Inu dog

The ‘joke’ crypto that started as a meme… what is Dogecoin?

Dogecoin is a cryptocurrency created as a ‘joke’ in 2013.

Its mascot is a Shiba Inu dog, made popular from the ‘doge’ meme featuring photos of the canine overlaid with text written in broken English.

It can be bought or sold on crypto exchanges like Coinbase or on trading apps like Robinhood and Webull.

One Dogecoin is worth 16 cents as of Tuesday morning. It’s never been worth more than 64 cents.

Creator Billy Markus said last year that he invented the coin as a joke.

‘I’m half detached, but it’s weird that something I made in a few hours is now part of internet culture,’ he said. ‘It’s amusing to see Elon Musk talk about it. It feels silly, but there’s this huge upwelling behind it.’

‘Musk used his pedestal as World’s Richest man to operate and manipulate the Dogecoin Pyramid Scheme for profit, exposure and amusement.’

Johnson named Musk’s Tesla electric carmaker in the suit since it accepts dogecoin as payment for certain derivative products. SpaceX was also included for having named one of its satellites after dogecoin.

Johnson likened dogecoin to a pyramid scheme since the virtual currency has no intrinsic value nor is it a product. Additionally it is not backed by a tangible asset and the number of ‘coins’ is unlimited.

Suits by investors who feel cheated by the promises of virtual currency are on the rise in the United Sates.

Tesla, SpaceX and a lawyer for Musk did not immediately respond to requests for comment.

A lawyer for Johnson did not immediately respond to requests for comment on what specific evidence his client has or expects to have that proves Dogecoin is worthless and the defendants ran a pyramid scheme.

Musk was also sued on Thursday by a Tesla shareholder, who accused the billionaire and Tesla’s board of directors of ignoring employee complaints of racism and sexual harassment.

The lawsuit – brought forward Thursday by plaintiff Solomon Chau in Texas where Tesla is headquartered – argues that an unaddressed ‘toxic workplace culture’ at the company has caused ‘irreparable’ reputational damage and financial harm.

The action was the latest against Tesla, which has been hit by a spate of sexual harassment lawsuits and Black employees complaining of rampant racism.

In February, the state of California sued Tesla over alleged discrimination and harassment against Black employees at its Fremont plant near San Francisco, saying in a complaint that the company had created a ‘racially segregated workplace.’

Thursday’s court filing stated that a ‘toxic environment took shape internally for years and the truth about Tesla’s culture has only recently emerged, leading to actions by both regulators and private individuals.’

The lawsuit asserts that Musk, who is Tesla’s executive director, and its 11 board members ignored several ‘red flags’, which resulted in the departure of numerous highly qualified employees and set off a series of costly legal proceedings.

‘These wrongs resulted in significant damages to Tesla’s reputation, goodwill, and standing in the business community’, the lawsuit states, and ‘exposed Tesla to hundreds of millions of dollars in potential liability for violations of state and federal law.’

In another lawsuit last year, Tesla was ordered to pay $137 million plus interest to a former elevator operator at its Fremont factory for turning a blind eye to racism. Earlier this year, the penalty was reduced to $15 million.

Other legal proceedings, in particular from Black women employees who claim to have been victims of racial slurs and inappropriate sexual remarks by colleagues or superiors, are underway.

Tesla, which has barely responded to requests from journalists since late 2020, did not respond to a request from AFP.