Tech billionaire Elon Musk said the Biden administration is ‘controlled by unions’ during a tech conference in California on Tuesday.

Musk, who’s expressed anti-union sentiment in the past, took a swipe at Biden after his company Tesla was snubbed from an August White House summit promoting electric vehicles.

During the Code Conference on Tuesday Musk was asked why he posted a tweet apparently mocking Biden after the president didn’t acknowledge Musk’s SpaceX company completing its first all-civilian flight.

Musk launched into his complaint over the White House event last month in response.

‘Didn’t mention Telsa once, and praised GM and Ford for leading the EV revolution. Does this sound maybe a little biased or something?’

Musk continued, ‘You know, just- just not the friendliest administration. Seems to be controlled by unions as far as I can tell.’

Earlier this month a Twitter user asked Musk why he thought the president didn’t publicly congratulate his historic SpaceX launch.

The South African-born billionaire now says it’s because he was rankled by Biden’s EV summit.

Tesla is the largest maker of EVs in the world, manufacturing exclusively battery-powered vehicles.

But company owner Musk wasn’t at the White House alongside executives from Ford, General Motors and Stellanis, which owns the Chrysler brand, when Biden promoted electric cars as part of his plan to tackle climate change.

In contrast with Telsa, electric vehicles make up less than 2 percent of GM and Ford’s sales.

Tesla’s lack of an invite could be connected to the attendance of representatives from the UAW, an international labor union with nearly 400,000 active members, including workers at GM, Ford and Stellanis. 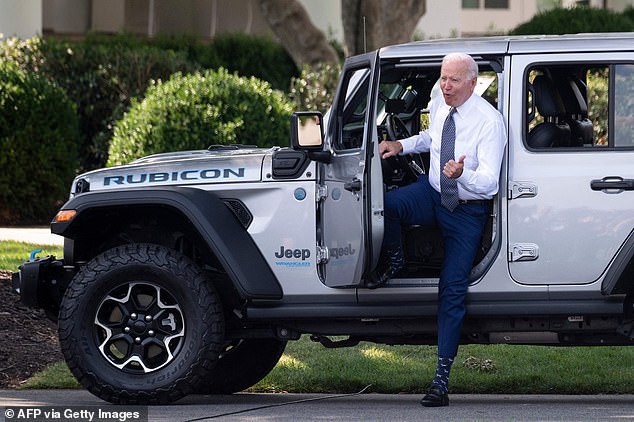 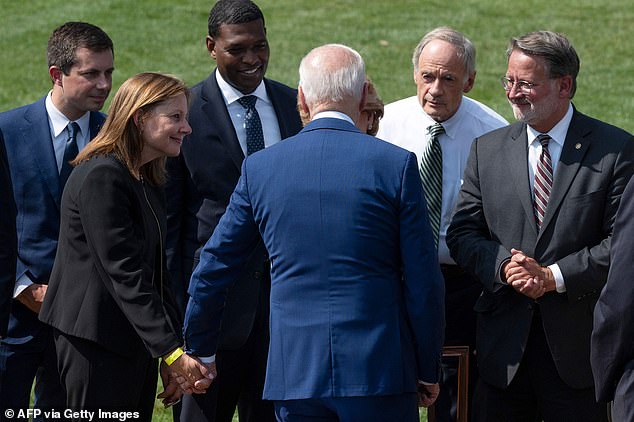 In attendance were executives from General Motors, Ford and Stellanis – but Telsa, whose fleet is comprised entirely of electric cars, was noticeably absent

The UAW has tried and failed to unionize workers at Tesla’s California plant.

White House Press Secretary Jen Psaki hinted in August that the EV giant’s snub could have something to do with Musk’s anti-union leanings.

She was asked at her daily briefing whether that was the reason pro-union Biden left Telsa out.

‘Well, these are the three largest employers of the United Auto Workers, so I’ll let you draw your own conclusions,’ Psaki said.

Biden has frequently billed himself as a friend of unions. He promised most recently in September to be the most pro-union president in US history.

Democrats in House of Representatives have also proposed to give union-made, US-built electric vehicles an additional $4,500 tax incentive.

The proposal would boost the maximum tax credit for these electric vehicles to $12,500 from the current $7,500. 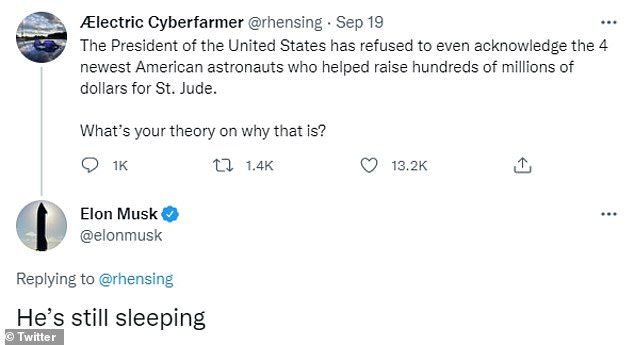 Musk for his part was reprimanded by the National Labor Relations Board in March for a tweet the NLRB claimed threatened workers against unionizing.

The three-year-old social media post read, ‘Nothing stopping Tesla team at our car plant from voting union. Could do so tmrw if they wanted. But why pay union dues & give up stock options for nothing? Our safety record is 2X better than when plant was UAW & everybody already gets healthcare.’

He was ordered to delete the tweet, and also re-hire a pro-union employee fired by Telsa.

Cindy Estrada, a UAW organizer for Stellanis, went after Musk for his Tuesday comments disparaging the Biden administration.

‘He needs to stop whining and just admit that workers should not have to punch out of democracy when they punch into work! Good leaders aren’t afraid of smart workers but embrace them!’ Estrada wrote on Twitter.