Elon Musk SUSPENDS Kanye West from Twitter for sharing a picture of a swastika inside a Star of David as his ‘presidential campaign symbol’ during wild meltdown: Anti-Semite rapper reveals their furious text exchange

After a day filled with his most offensive outbursts to date, including praise for Nazis and Adolph Hitler, Kanye West has finally found the limit of new Twitter owner Elon Musk.

The self-proclaimed ‘chief twit’ was responding to a tweet in which West shared an image of a Nazi swastika inside a Star of David, a religious symbol in Judaism, indicating it would the logo for his proposed 2024 presidential campaign.

West’s account was initially locked for 12 hours, and later suspended. It’s unclear whether the suspension is temporary or permanent.

‘Sorry, but you have gone too far. This is not love,’ Musk wrote in a text message to West citing the tweet, according to screenshots the rapper posted before the suspension took effect.

West, who has legally changed his name to Ye, responded: ‘Who made you the judge.’ 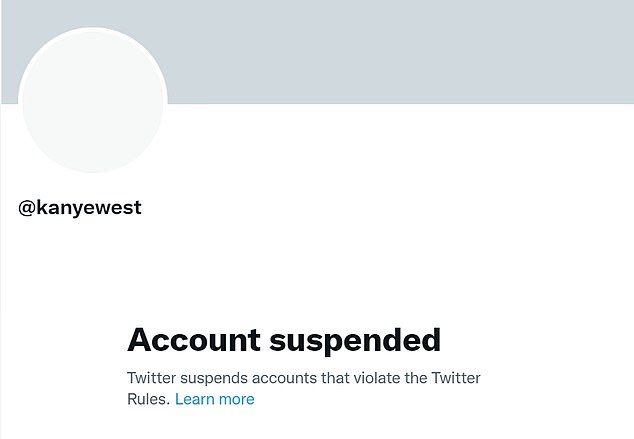 West’s account was initially locked for 12 hours, and later suspended. It’s unclear whether the suspension is temporary or permanent

‘Despite that, he again violated our rule against incitement to violence. Account will be suspended.’

Shortly afterward, Musk tweeted ‘FAFO’ which are initials for the term ‘f*** around, and find out.’

Musk, who purchased Twitter for $44 billion last month, has previously styled himself as a ‘free speech absolutist’ and vowed to reduce moderation on the platform to the minimum.

After the takeover, Musk swiftly reinstated West’s account, which had been banned for the rapper’s anti-Semitic threats and insults, including his vow to go ‘death con 3 on Jewish people.’ 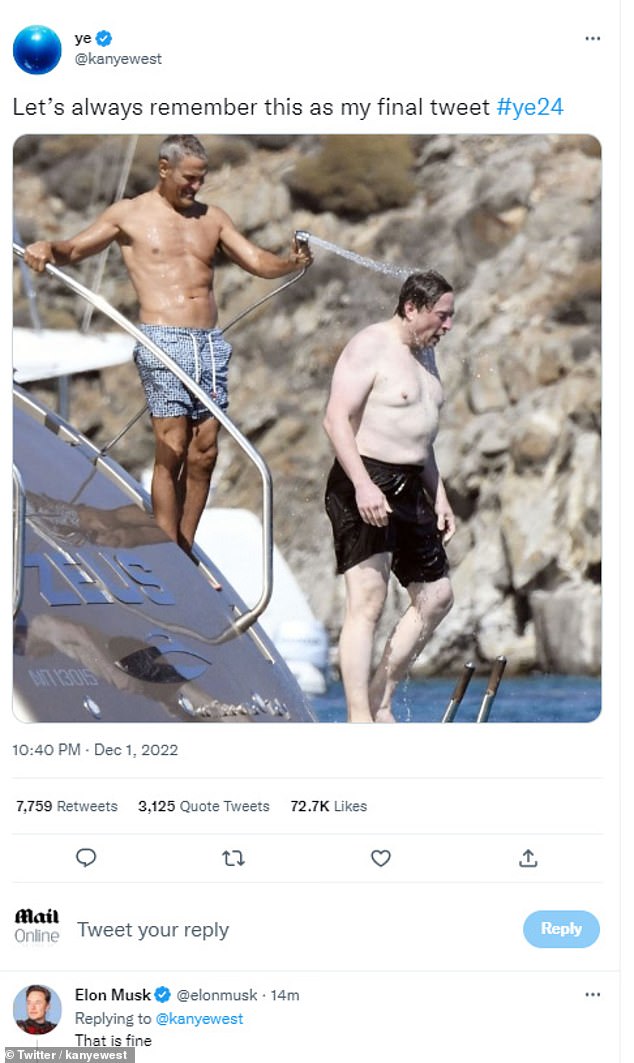 After West mocked Musk by tweeting a photo of the billionaire shirtless, Musk responded ‘That is fine’

‘This is not,’ said Musk in response to the image of the swastika and Star of David

Shortly afterward, Musk tweeted ‘FAFO’ which are initials for ‘f*** around, and find out’

But despite his free speech ideals, Musk has his own limits, and last week vowed to maintain a Twitter ban on conspiracy theorist Alex Jones and his Infowars website.

‘I have no mercy for anyone who would use the deaths of children for gain, politics or fame,’ Musk said of Jones, who has previously claimed the 2012 Sandy Hook elementary school shooting was a hoax.