Elon Musk has revealed that he has spoken to Kanye West and expressed his concerns about the rapper’s recent anti-Semitic tweet.

The Gold Digger penman made headlines for an incendiary tweet attacking ‘Jewish people’ over the weekend after he was banned from Instagram for posting a private chat he had with Sean ‘Diddy’ Combs.

But Musk, who is in the midst of his own takeover bid for the social media platform, revealed on Twitter that he has intervened and that the rapper took the words ‘to heart.’

‘Talked to ye today & expressed my concerns about his recent tweet, which I think he took to heart,’ Musk wrote on Twitter.

West was locked out of his Twitter account on Saturday after he tweeted: ‘I’m a bit sleepy tonight but when I wake up I’m going death con 3 On JEWISH PEOPLE The funny thing is I actually can’t be Anti Semitic because black people are actually Jew also You guys have toyed with me and tried to black ball anyone whoever opposes your agenda.’

The now-deleted tweet prompted both outrage and concern for West’s mental health.

West’s tweets marked the first time in nearly two years since he has posted to Twitter. Musk welcomed his return to the platform, tweeting ‘Welcome back to Twitter, my friend!’

The Tesla CEO and Twitter’s executives are negotiating the terms of his $44 billion takeover. After engaging in a weeks-long court battle trying to get out of it, Musk abruptly decided he would close on his deal on the original terms.

Musk, however, conditioned his proposal on his ability to secure debt financing and now has until October 28 to close on the transaction. 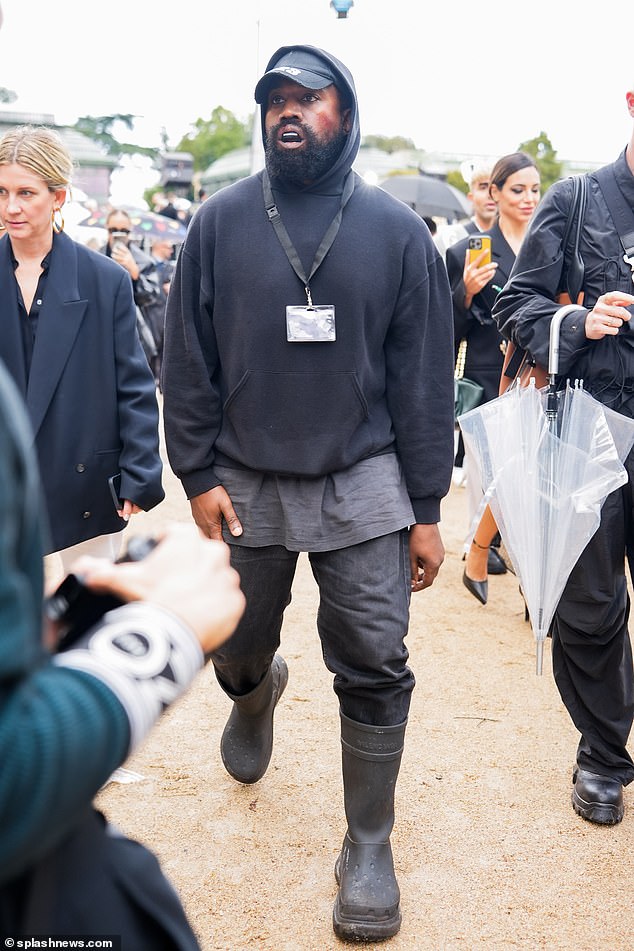 West also posted a picture on Saturday of himself and Meta CEO Mark Zuckerberg singing karaoke as he lamented how the Facebook billionaire had kicked him off of Instagram.

West had gone after Zuckerberg for restricting his Instagram after he posted a now-deleted private conversation with Sean ‘Diddy’ Combs.

In the text exchange, Combs tries to get West to stop sporting shirts emblazoned with ‘White Lives Matter.’

‘I’m trying to talk to you as a black man. And I’m talking to you because this is hurting our people. Stop.’

West replies: ‘Anything you text I will post.’ The rapper and fashion mogul kept his word, posting the entire exchange to his 18million followers.

The series of texts ends with West accusing Combs of being controlled by Jewish people – an anti-Semitic conspiracy theory.

‘This ain’t a game. Ima use you as an example to show the Jewish people that told you to call me that no one can threaten or influence me,’ West wrote his friend.

He reportedly captioned the post of the text exchange ‘Jesus is Jew.’ The American Jewish Committee has since condemned West, saying his post was ‘dangerous.’ 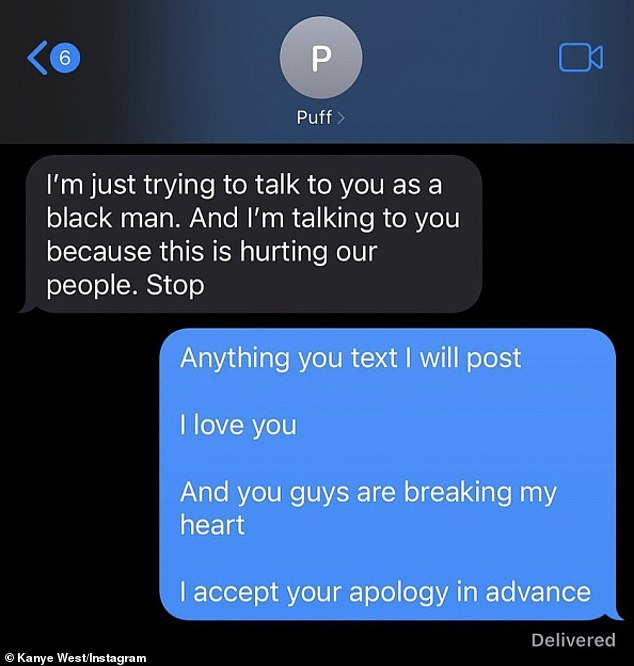 West reported told Combs that ‘Jewish people told you to call me’ and that they were not going to ‘threaten or influence me.’ West also said the rapper was ‘breaking my heart’ and that ‘no one gets in between me and my money’ 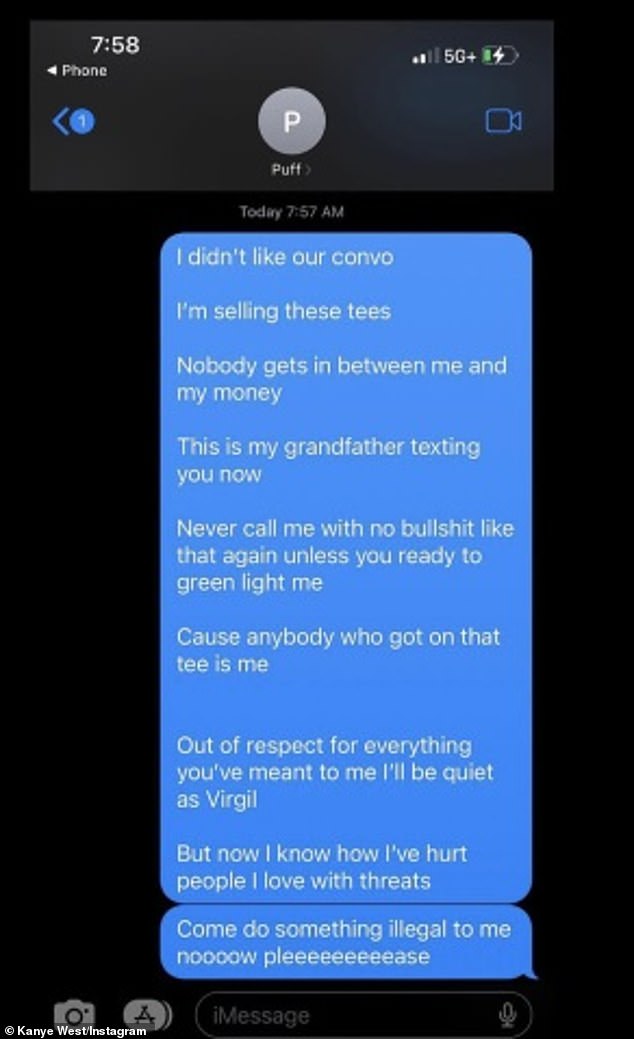 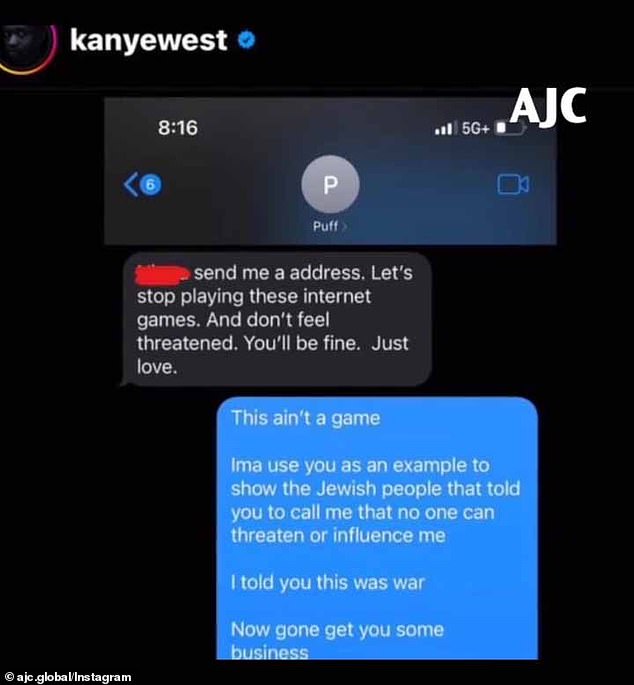 He posted the tweet alongside a photo of the pair performing karaoke at an unknown time.

A Meta spokesperson said: ‘We may place restrictions on accounts that repeatedly break our rules.’

It is unclear what exact rule West broke, but he has been using the platform with growing frequency to bash numerous people, including his ex-wife Kim Kardashian.

Kanye West has been restricted from Instagram for supposedly anti-Semitism claims, saying Sean ‘Diddy’ Combs was being controlled by Jewish people 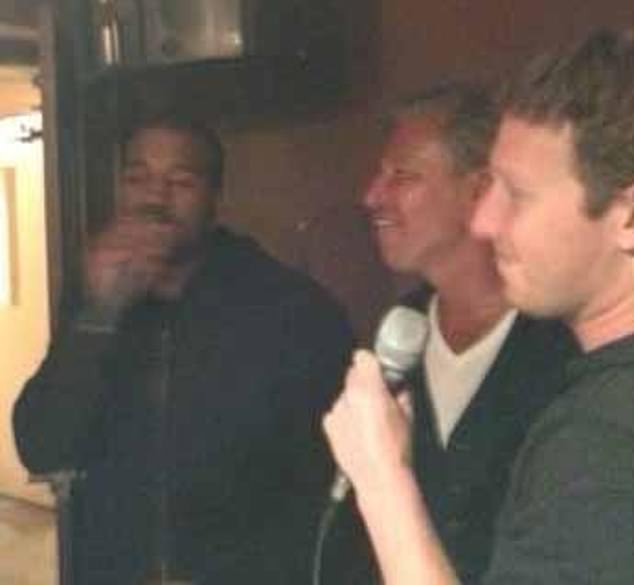 The controversial rapper was spotted heading to a clothing warehouse with Nalu, 24, who wore a gray figure-hugging dress following a string of dates with her in recent days.

West, who legally changed his name to simply Ye last year, dressed his new muse in a 2024 baseball cap to match his own, suggesting that she’s all in on his potential 2024 presidential candidacy.

Nalu’s gray dress, which had a suede texture, featured revealing cutouts over her hips that left little to the imagination. 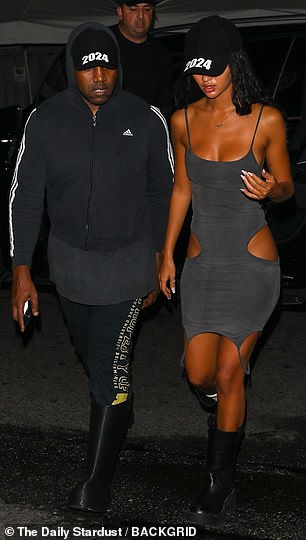 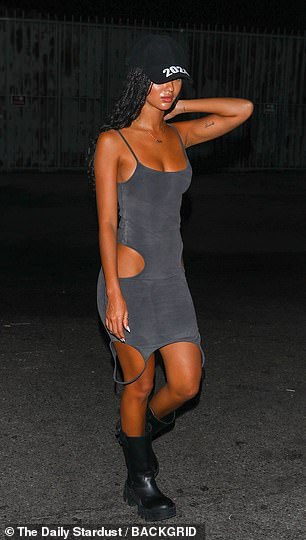 New romance? Kanye West was spotted out for what looked like a romantic event with the Brazilian model Juliana Nalu on Sunday night around Los Angeles. The controversial rapper, 45, was spotted heading to a clothing warehouse in Los Angeles with Nalu, 24, who wore a gray figure-hugging dress 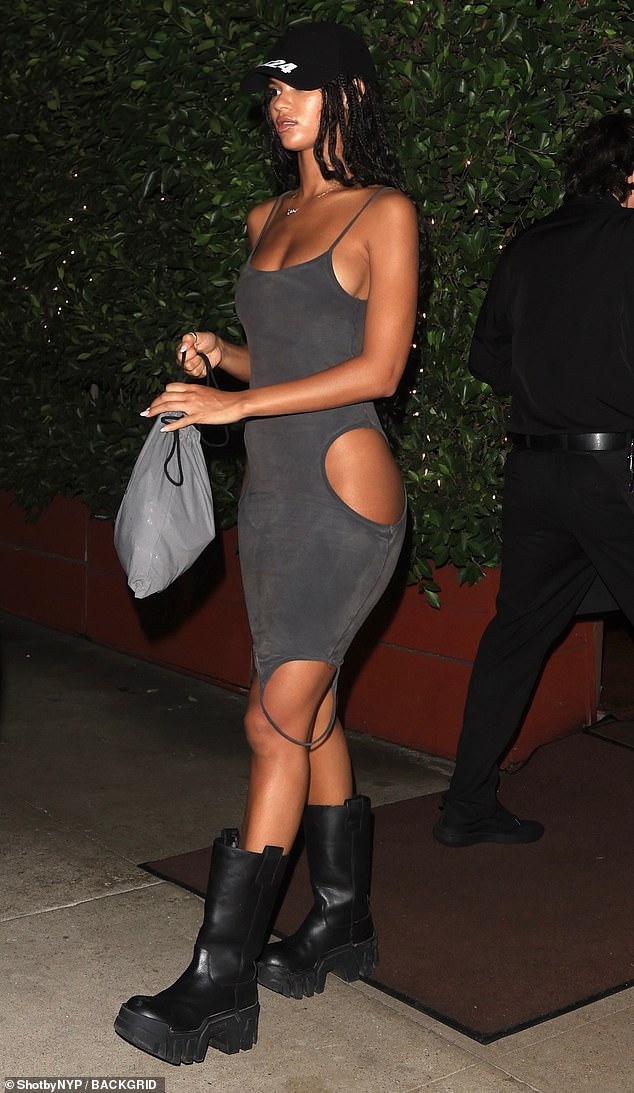 Showing off: Nalu’s gray dress, which had a suede texture, featured revealing cutouts over her hips that left little to the imagination

West also recently sat down for the interview with Fox News’ Tucker Carlson after he returned from Paris Fashion Week where he sparked controversy with his ‘White Lives Matter’ fashion show concept.

The interview came just days after the 45-year-old rapper created widespread controversy when he sported a ‘White Lives Matter’ T-shirt at his YZY fashion show in Paris, which was widely condemned by fans and fashion industry luminaries and led Adidas to put its relationship with him ‘under review.’

He told Carlson the shirt came from his ‘energy’ and his ‘connection with God.’

‘I do certain things from a feeling, I just channel the energy. It feels right, hits using a gut instinct, connection with God and just brilliance.’

He also said he thought the idea of him ‘wearing the shirt was funny’ and his father – who he claimed is a former Black Panther – thought so too.

‘I said: ‘Dad, why do you think it’s funny?’ and he said: ‘It’s just a black man stating the obvious,’ he told Carlson.

‘That was my favorite response, because I kept thinking: People are looking for an explanation. And people say as an artist you have don’t have to an explanation, but as a leader you do. 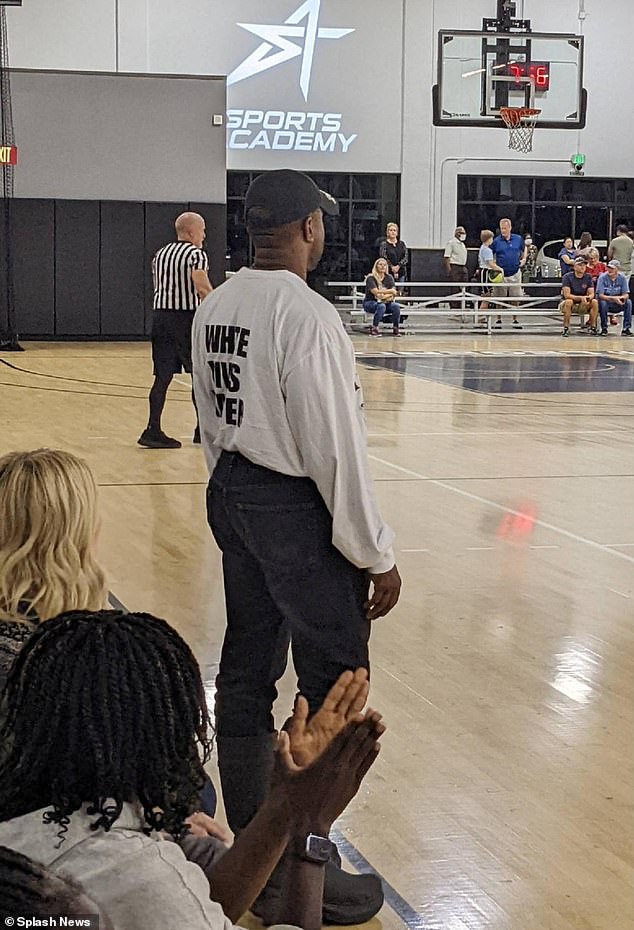 West has been in the hot seat recently for his ‘White Lives Matter’ shirt, which he was seen recently wearing to his daughter’s game (pictured) 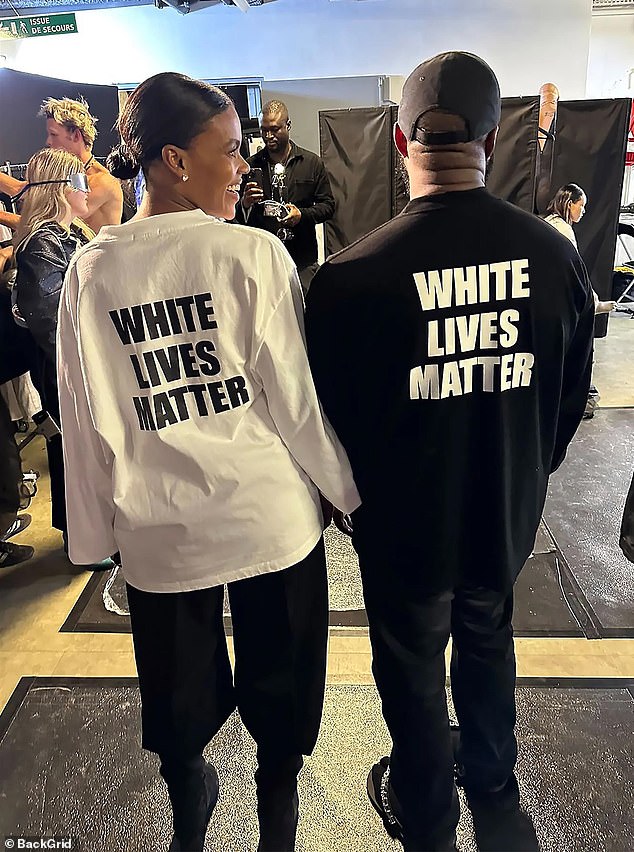 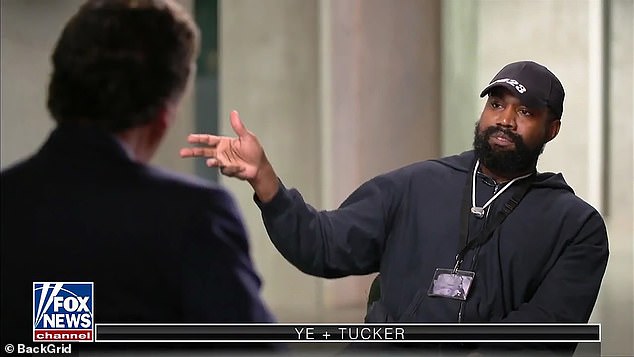 He also spoke with Fox News’ Tucker Carlson recently about the shirts and said he does ‘certain things from a feeling, I just channel the energy. It feels right, hits using a gut instinct, connection with God and just brilliance’

He also said the controversy is that white people ‘have stripped us of our identity and labeled us as a color have told us what it means to be black.’

‘The answer to why I wrote “White Lives Matter” on a shirt is because they do. It’s the obvious thing.’

Many have called the fashion designer out for the slogan, including model Gigi Hadid, who branded him a ‘bully.’

The supermodel, 27, recently commented that Ye was ‘a bully’ after he lashed out at Stylist and Contributing Vogue Fashion Editor Gabriella Karefa-Johnson when she called his White Lives Matter merchandise presented during Paris Fashion Week ‘violent’ and ‘dangerous.’

He later lashed out at her, calling her a ‘Karen.’  He wrote: ‘YOU WERE BORN WITH A SILVER SPOON IN YOUR MOUTH YOURE A ZOMBIE.’

He later walk back on his criticism of Karefa-Johnson, insisting he had no issue with Vogue’s contributing fashion editor.

His spokesman Jason Lee quit in protest at the provocative show, writing on Instagram that West was ‘gaslighting black people and empowering white supremacy.’

Since West has been airing his dirty laundry on Twitter and riling up a storm at Paris Fashion Week, Adidas has announced it would review its business relationship with the rapper after he spoke out against the brand.

Khloe Kardashian – sister to his ex-wife – has pleaded with West in a now-deleted post to stop airing the family business online.