Elon Musk is said to have plans to take Twitter public within three to five years after going private on Friday when he closes on the $44billion takeover deal.

Looking to end one of the most heated merger fights in US history, Musk will be taking Twitter off the trading floor, but not for long, sources familiar with the matter told Bloomberg.

The sources claimed the Tesla CEO will put the social media company back into the public sometime between 2025 and 2027.

Twitter shares were suspended for trading on Friday pending the takeover’s outcome, which will be settled by a Delaware judge if Twitter and Musk cannot close the deal by themselves.

Shares were up 1.1 percent at $53.96 on Thursday following a meeting between Musk and Twitter’s workforce as the world’s richest man insisted that the company cannot become a ‘hellscape’ under his ownership.

Elon Musk confirmed on Thursday that he has bought Twitter ahead of a court-imposed deadline to seal his $44billion takeover of the company. Sources say he will take the company public again within three to five years 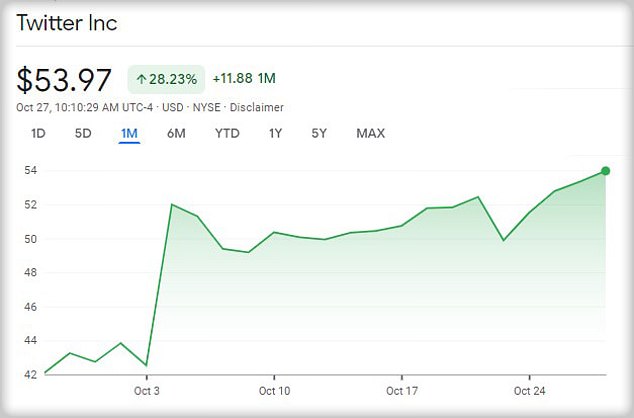 Twitter shares, which fluctuated wildly amid the legal fight between Musk and the company, settled at $53.97 on Thursday, with sell currently halted as the deal closes 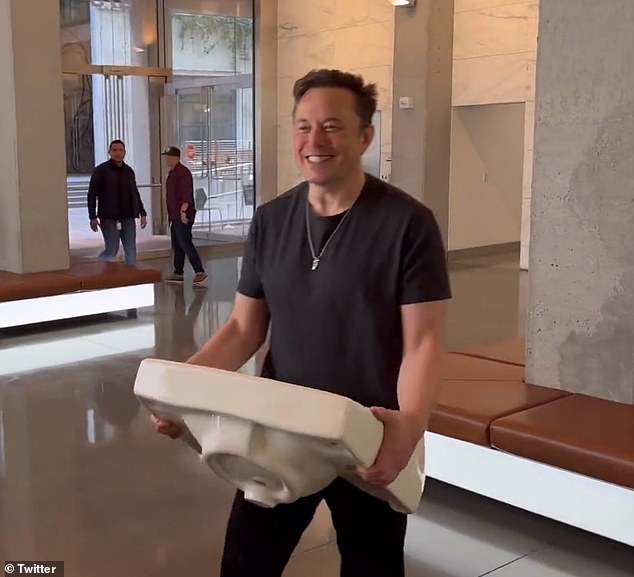 Musk posted a video of himself marching into Twitter’s San Francisco headquarters carrying a porcelain sink on Wednesday, calling himself the ‘Chief Twit’

As of Friday, banks providing $13 billion in debt financing are in the process of transferring the funds to close out the Twitter deal, with Musk paying the $54.20-per-share he agreed to payout in April.

Once the deal closes, Twitter will be private for the first-times since it’s first IPO in November 2013.

Discussing his hopes for Twitter on Thursday, Musk sent a tweet to advertisers saying that while he wants the social media giant to become a ‘digital town square’ it ‘obviously cannot become a free-for-all hellscape, where anything can be said with no consequences.’

‘Our platform must be warm and welcoming to all,’ he added, ‘where you can choose your desired experience according to your preferences, just as you can choose, for example, to see movies or play video games ranging from all ages to mature.’

He also said that he ‘very much believes that advertising… can delight, entertain and inform you,’ saying that when done properly, advertising ‘can show you a service or product or medical treatment that you never knew existed, but is right for you.

‘For this to be true, it is essential to show Twitter users advertising that is as relevant as possible to their needs,’ the 51-year-old billionaire concluded in his letter, adding: ‘Low relevancy ads are spam, but highly relevant ads are actually content!’

Musk later agreed with a rapper on the platform, Zuby, who suggested that Twitter should ‘find a way to compensate’ monetize or partner ‘with its top creators, like every other social media app.’

The tweets comes just one day after the billionaire changed his Twitter profile to identify himself as the ‘Chief Twit’ and posted a video of himself walking into the company’s San Francisco headquarters carrying a porcelain sink. 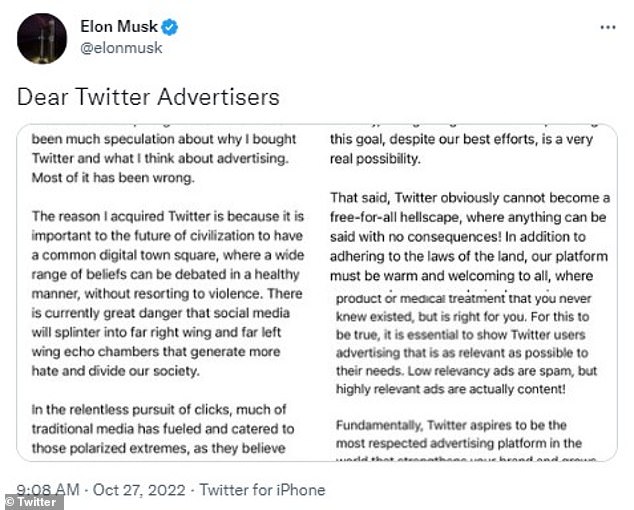 The Tesla CEO sent a tweet to advertisers Thursday morning, saying that while he wants the social media giant to become a ‘digital town square’ it ‘obviously cannot become a free-for-all hellscape, where anything can be said with no consequences’ 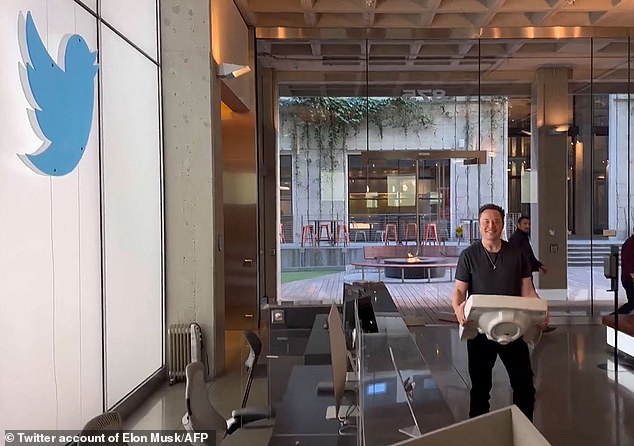 Musk also revealed his ‘motivation’ for buying the company in the open letter to advertisers, writing: ‘There has been much speculation about why I bought Twitter and what I think about advertising. Most of it is wrong.’

He said he acquired the company ‘because it is important to the future of civilization to have a common digital town square, where a wide range of beliefs can be debated in a healthy manner, without resorting to violence.’

But, the 51-year-old billionaire wrote, ‘much of traditional media has fueled and catered’ to either the far right or the far left ‘as they believe that is what brings in the money, but in doing so, the opportunity for dialogue is lost.

‘That is why I bought Twitter,’ Musk wrote. ‘I didn’t do it because it would be easy. I didn’t do it to make more money. I did it to try to help humanity, whom I love.

‘And I do so with humility, recognizing that failure in pursuing this goal, despite our best efforts, is a very real possibility.’

Following the visit, Stephanie Guevara, a senior iOS engineer for the platform, asked Musk directly: ‘Was it fun to look at the faces of the people you said you’d be laying off?’ 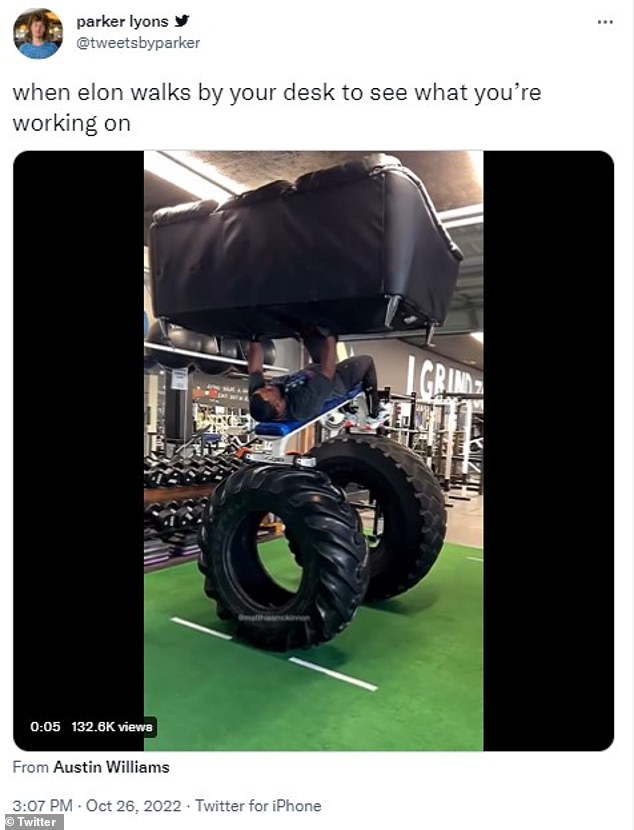 Parker Lyons expressed his nervousness about the new boss’ visit with a meme of a man on top of two tires lifting a sofa, captioned: ‘When Elon walks by your desk to see what you’re working on’ 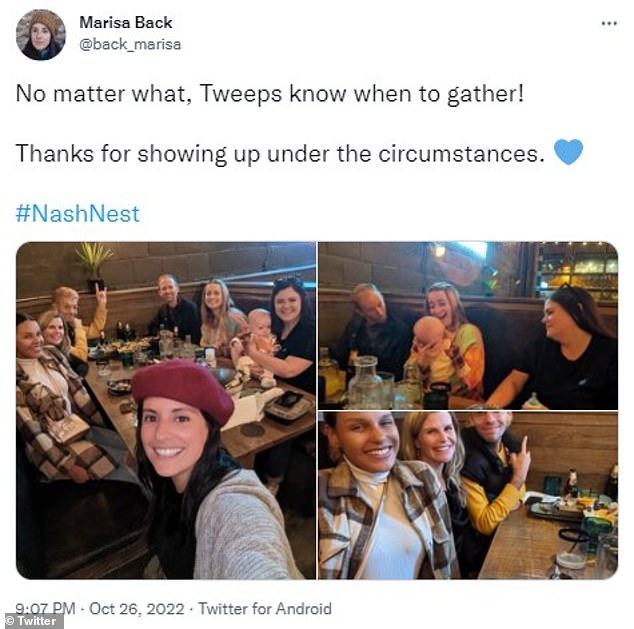 Others just shared how they are sticking together during the takeover

He was later pictured speaking with some employees, reportedly denying rumors that he is culling three quarters of the staff.

But that did little to assuage the more than 7,500 people employed by the social media giant.

As one Twitter employee explained in an anonymous essay for Business Insider, those who remain at the company are worried about the Tesla CEO’s volatility.

‘I don’t think my colleagues and I have a good model for how volatile he is — and I can see that rocking the boat, especially if he makes more comments that make people say, “What the hell?”‘ the anonymous Twitter employee wrote.

‘There are also people here who are just unfazed by his volatility,’ they continued. ‘They’re not going to react in any way.’

The employee noted that their fellow workers’ views of their new boss will all be contingent on how many people he lays off.

‘People are asking, if heads are going to roll, whose good graces do you need to be in to stay?’ the employee wrote, adding: ‘Most people think layoffs are going to be pretty immediate.

‘I don’t think our site-reliability engineers need to be worried, though,’ they mused. ‘On the other hand, machine-learning engineers, or the people responsible for building experimental services are more worried.’ 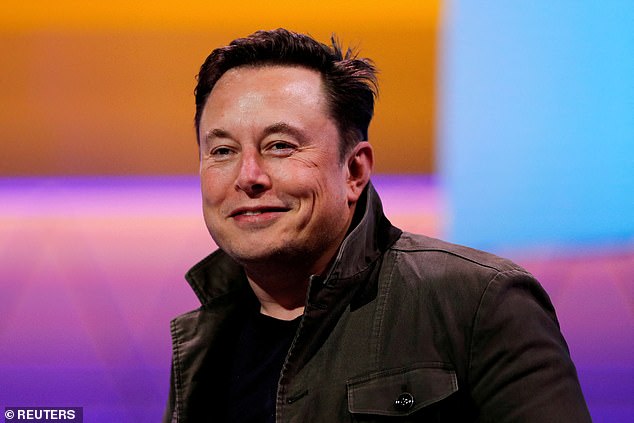 The US Department of Justice is heading a criminal investigation into Tesla, which could lead to charges against the company or its executives, including CEO Elon Musk (pictured) 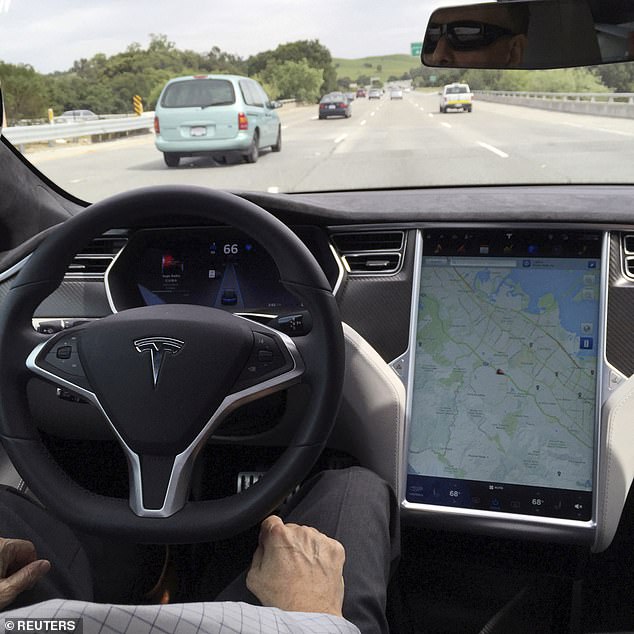 Along with handling the close of the Twitter deal, Musk must now also contend with thee US Department of Justice leading a criminal investigation into Tesla after the company’s self-driving feature led to more than a dozen crashes – some of which were fatal.

A probe into more than 830,000 of the company’s vehicles and its complementary advertising leads investigators wondering whether Tesla misled consumers, investors and regulators over unsupported claims regarding the feature.

Should the department find any evidence to support its claims, criminal charges against the company or individual executives could be filed.

Former US attorney Barbara McQuade, who has prosecuted automotive companies in the past, told Reuters that investigators would need to find internal communications within the company indicating misleading statements.

The investigation follows a 2021 fatal crash in which a Tesla Model S, operating on ‘Autopilot,’ led its driver into a parked vehicle killing a 22-year-old college student.

NHTSA officials will continue to review vehicles before regulators will have justification for requesting a recall.