Elon Musk’s Twitter has been attacked for complying with a request from the Indian government to censor tweets within the country that linked to a BBC documentary that was critical of its prime minister.

Twitter users noted the hypocrisy of the self-proclaimed ‘free speech absolutist,’ who in the past had said Twitter would not block material at the instruction of a government ‘unless at gunpoint’. ‘So did Modi hold Elon at gunpoint or what,’ one person said.

When Musk bought Twitter last year he adamantly justified doing so on the basis that the fight for free speech was ‘a battle for the future of civilization’.

Others suggested that Musk, who is one of the richest men in the world, was being disingenuous when he made claims about freedom of speech.

‘If you don’t recognize that musk’s free speech absolutism begins and ends with his wallet, you are the purest mark,’ said Smithsonian editor Ted Scheinman.

The BBC is generally considered objective in its coverage of world events. In the wake of this controversy, the BBC has defended the film, saying it was ‘rigorously researched according to the highest editorial standards.’ 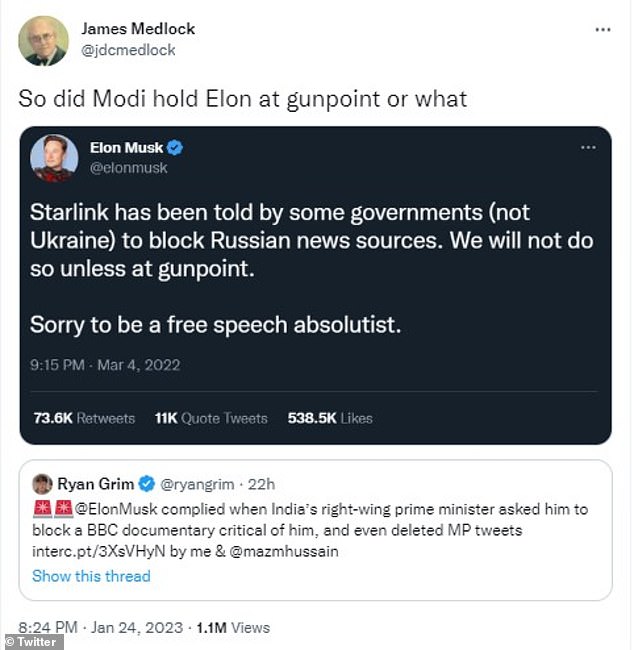 Twitter users noted the hypocrisy of the self-proclaimed ‘free speech absolutist,’ who in the past had said Twitter would not block material at the instruction of a government 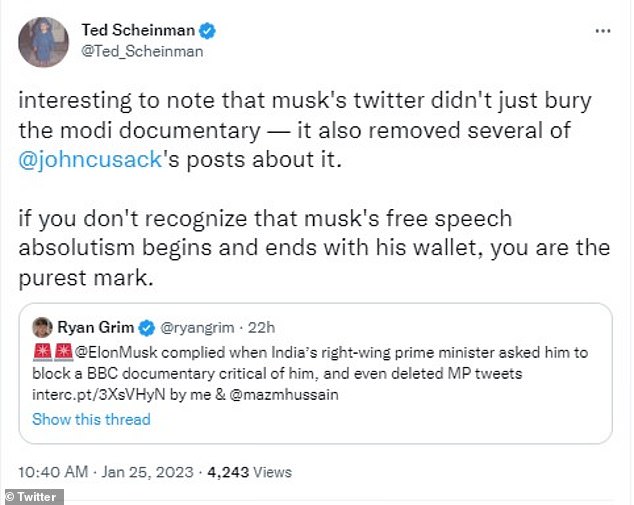 Once he gained access to Twitter, Musk leaked documents in attempt to uncover the censorship of a New York Post story that described the contents of Hunter Biden’s laptop before the 2020 election in the US.

That under his leadership Twitter had pulled an uncannily similar stunt, albeit in India, was not well-received.

Some people saw the move by Twitter as a sign of what may be to come, and that Musk will struggle to maintain relationships with international players and maintain Twitter’s neutrality at the same time.

‘I’m reupping this October prediction that Musk’s international entanglements would be the Achilles heel of Twitter,’ wrote Alex Stamos, a cybersecurity expert and computer scientist at Stanford.

Despite widespread outrage Musk scarcely acknowledged the issue. In a brief response to a tweet on Wednesday criticizing him for the hypocrisy, Musk said he was unaware of the issue and busy managing his other companies, leaving him unable to supervise Twitter.

‘First I’ve heard. It is not possible for me to fix every aspect of Twitter worldwide overnight, while still running Tesla and SpaceX, among other things,’ he said. 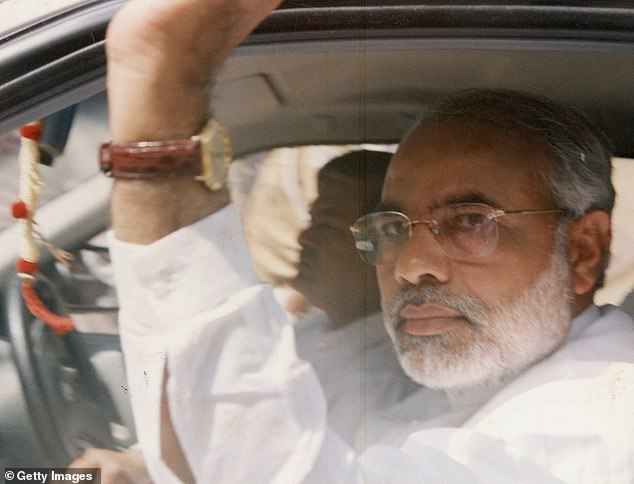 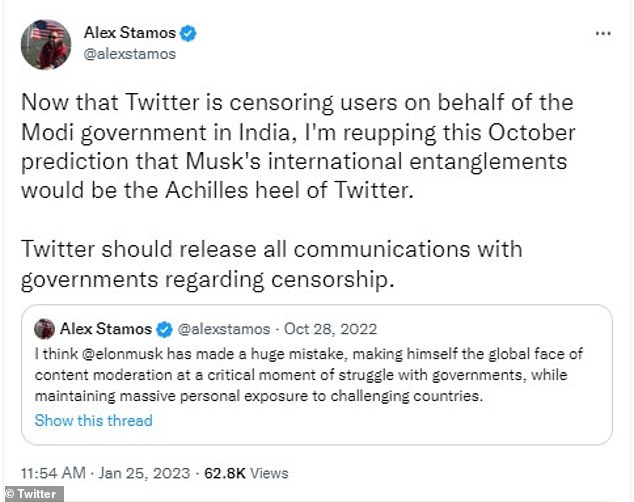 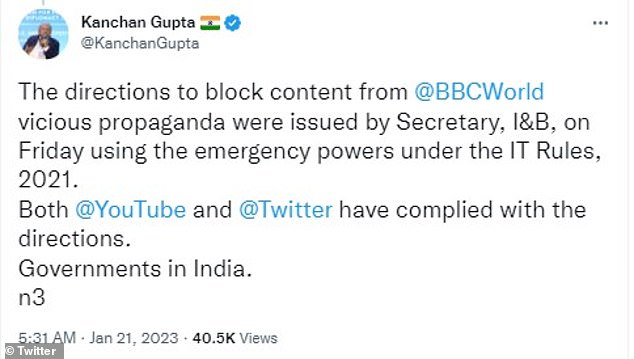 India’s minister of Information and Broadcasting, Kanchan Gupta said both Twitter and YouTube had ‘complied with the directions’ to block the documentary

Indian officials appealed to both Twitter and YouTube to take action against the documentary, which explored links between Prime Minister Narendra Modi and riots in 2002 that saw over a 1,000 people killed, the majority of whom were Muslims.

India’s minister of Information and Broadcasting, Kanchan Gupta, said on the weekend that ‘directions to block’ the ‘hostile propaganda and anti-India garbage’ were issued by his department and that both Twitter and YouTube ‘have complied with the directions.’

At around the same time Twitter users began noticing that tweets containing links to the film, versions of which had been uploaded to YouTube, were being replaced with a notice that read: ‘This Tweet from [user] has been withheld in India in response to a legal demand.’

The BBC documentary, called India: The Modi Question, examined the role Narendra Modi played allowing anti-Muslim riots to escalate in the Indian state of Gujarat, where he was chief minister at the time.

The violence in Gujarat in 2002 erupted after a train carrying Hindu pilgrims was suspected to have been set alight by a Muslim mob, killing 59 people.

Groups of Hindus later brought destruction and violence to Muslim neighborhoods in a series of revenge attacks. In 2017, 11 men were jailed for life for setting the train on fire.

Modi has denied accusations that he did not do enough to stop the riots, and he was exonerated in 2012 following an inquiry overseen by the Supreme Court. A petition questioning his exoneration was dismissed last year.

He is the leader of the BJP, a nationalist party in India that has been criticized for its Hindu nationalism and intolerance of Muslims. 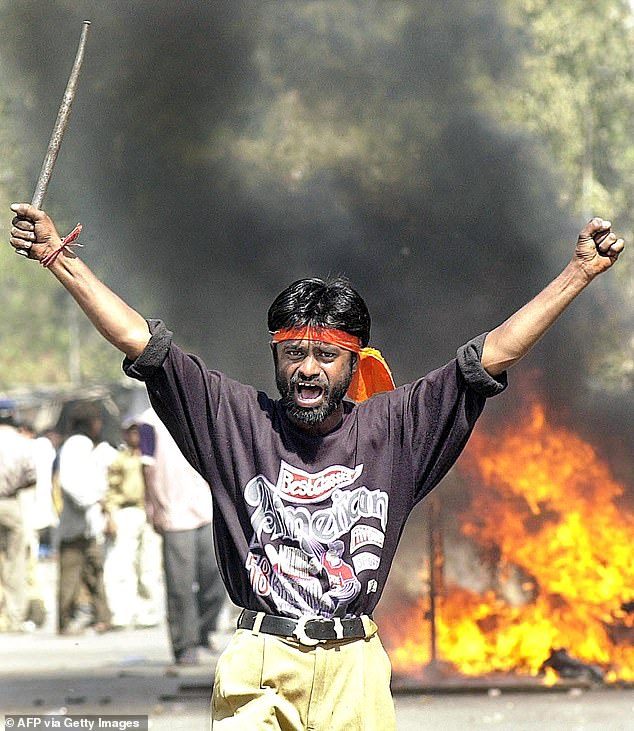 India: The Modi Question, produced by the BBC, examined the role Narendra Modi played allowing anti-Muslim riots to escalate in Gujarat in 2002 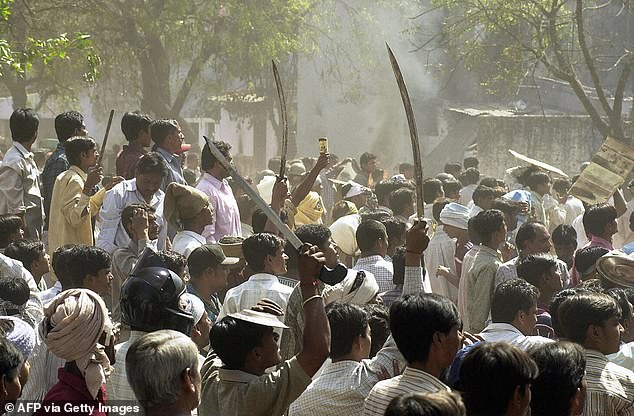 More than 1,000 people killed during those riots, the majority of whom were Muslims

In a Twitter thread expressing his governments outrage at the documentary, Indian minister Kanchan Gupta described the film as ‘malicious’ and ‘anti-India.’

‘The mendacious series produced by UK’s state-owned, state-funded public broadcaster @BBCWorld has been determined to be a ‘propaganda piece’ that lacks objectivity and reflects BBC’s colonial mindset,’ he said.

Numerous users experienced disrupted of their tweets, including American actor John Cusack. He posted two tweets linking to the documentary, both of which were hidden to Twitter users within India.

Members of the opposition, the All India Trinamool Congress party in India, also expressed outrage at attempts to censor the documentary.

Derek O’Brien, a parliament member from West Bengal, had his tweet sharing the ‘deeply researched’ film taken town altogether. He then posted in another tweet an email he received from Twitter with a ‘flimsy reason’ for taking it down.

‘Sorry, Haven’t been elected to represent world’s largest democracy to accept censorship,’ Mahua Moitra, another member of the TMC party, said on Twitter. ‘Here’s the link. Watch it while you can.’ 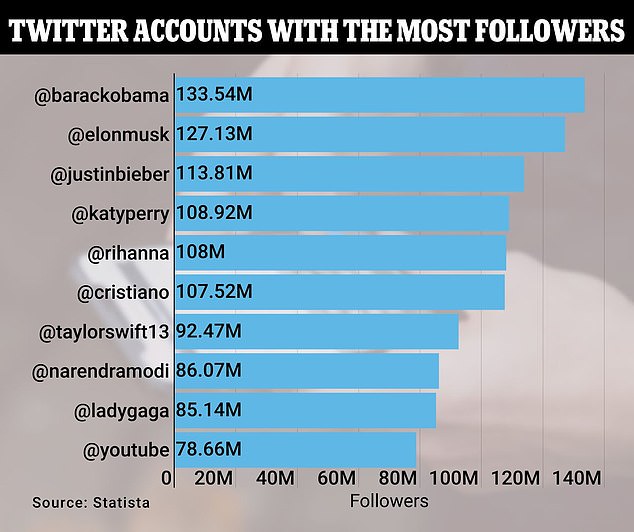 Modi has around 86 million followers on Twitter, making him the 8th most followed person in the world

On Tuesday students hosting a screening of the BBC film in Jawaharlal Nehru University in Delhi were hampered after the university was suspected of cutting power and internet access to the campus.

University union president Aishe Ghosh had asked students via Twitter to attend the screening, describing it as having been ‘”banned” by an “elected government” of the largest “democracy”‘, Reuters reported.

Ghosh said they were watching the documentary on their phones and laptops after power was cut off about half an hour before a scheduled screening.

The university denied permission for the screening to go ahead and threatened disciplinary action if the documentary was to be shown.

‘It was obviously the administration that cut off the power,’ Ghosh said. ‘We are encouraging campuses across the country to hold screenings as an act of resistance against this censorship.’