Elizabeth Debicki wore a grey suit and a black top in Barcelona this weekend as she appeared to film The Crown scenes which will depict the events leading up to Princess Diana’s death – as Netflix insists viewers will not see the crash itself.

The Australian actress, 32, wore the same outfit the late Princess of Wales was spotted wearing in CCTV footage in a lift at the Ritz Hotel just hours before she and her partner Dodi Al-Fayed died in a car crash on 31 August 1997.

Debicki was spotted in the back of a car with Khalid Abdalla, 40, who plays Egyptian film producer Dodi, during production.

Elizabeth Debicki, 32, who plays Princess Diana in The Crown, donned a grey suit identical to the one worn by the late Princess of Wales in footage from a CCTV camera in a lift at the Ritz Hotel hours before she died. Filming for the events leading up to the fatal car crash took place in Barcelona this weekend 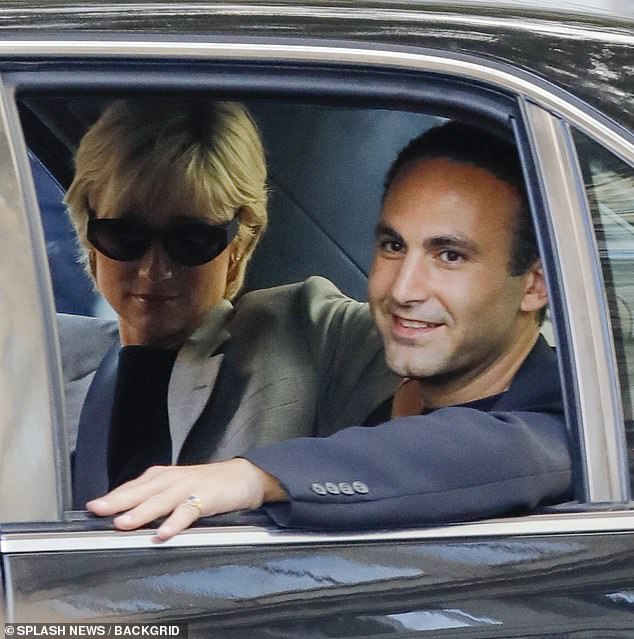 Debicki wore sunglasses and looked the image of Diana as she sat in the back of a car with Khalid Abdalla, 40, who plays Dodi Fayed, with whom the Princess was travelling when the car crashed in Paris 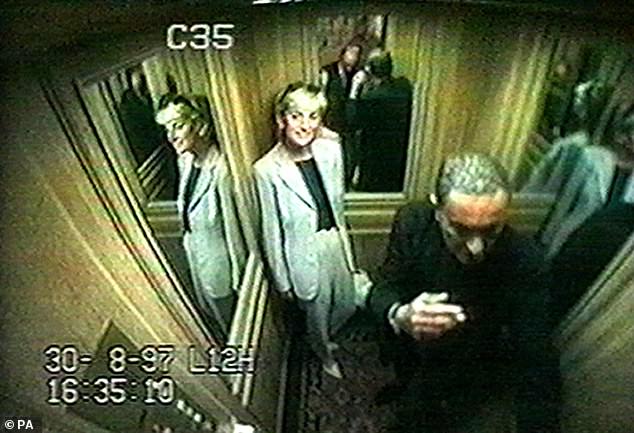 Princess Diana with Dodi Al-Fayed in the lift of the Ritz Hotel in Paris on the afternoon of 31 August 1997, hours before the pair died in a car accident 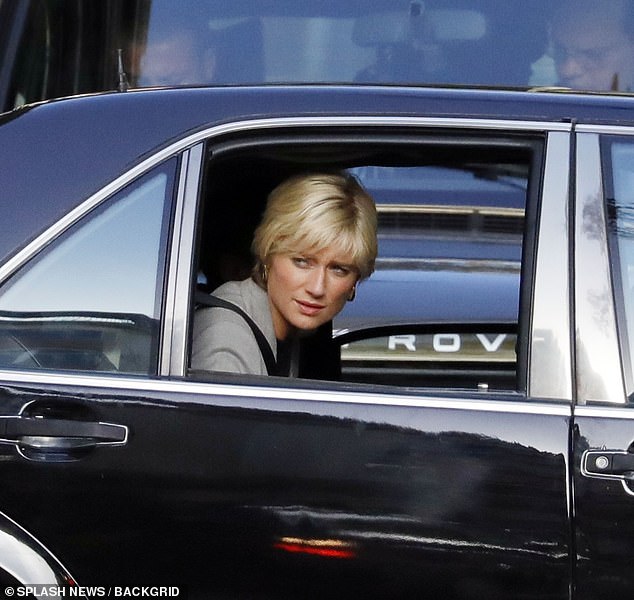 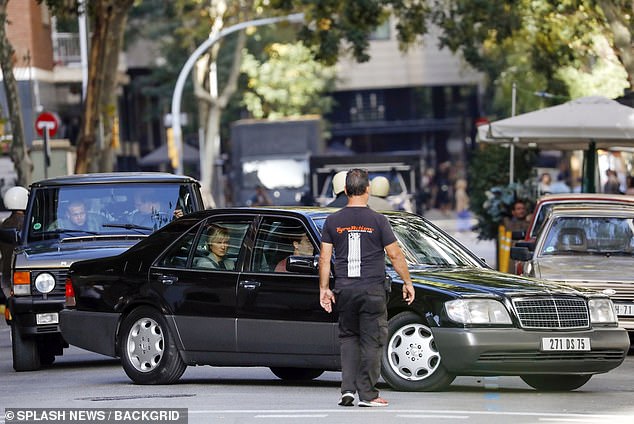 The Mercedes was followed by larger set vehicles including a 4×4 as filming got underway, while other crew members stood nearby 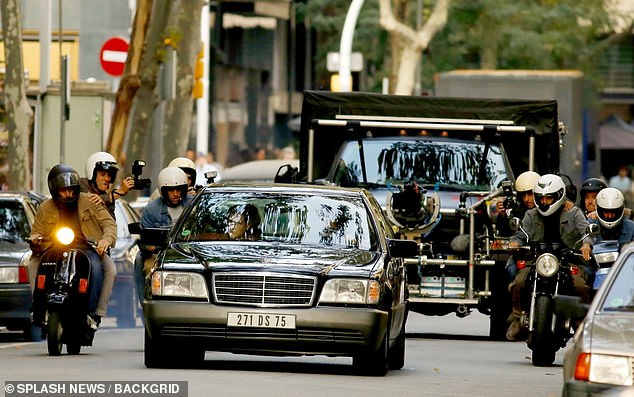 The scenes were filmed in Barcelona over the weekend, as the Catalan city has been given a makeover to resemble the streets of Paris

The Catalan city’s Francesc Macia Square was given a French makeover ahead of Netflix’s return to film the scenes – as fans of the show are still reeling from the release of the trailer for series five.

Filming for series six of the Netflix drama had been temporarily halted following the death of Queen Elizabeth II on 8 September, but in the last few weeks the crew have been spotted at work throughout Europe.

Most recently, production got underway in Palma de Mallorca, Spain, where it is believed the crew filmed scenes depicting Princess Diana’s St Tropez yachting trip with Dodi in July 1997, just weeks before they died.

Young actors Rufus Kampa and Will Powell were spotted with Debicki and Abdalla, playing Prince William and Prince Harry, who were also on the holiday.

It is also thought the series will feature Dodi in St Tropez with Kelly Fisher – his jilted ex-girlfriend who claimed she was due to marry the son of the Egyptian billionaire just days after photos emerged of him on a yacht with the Princess. 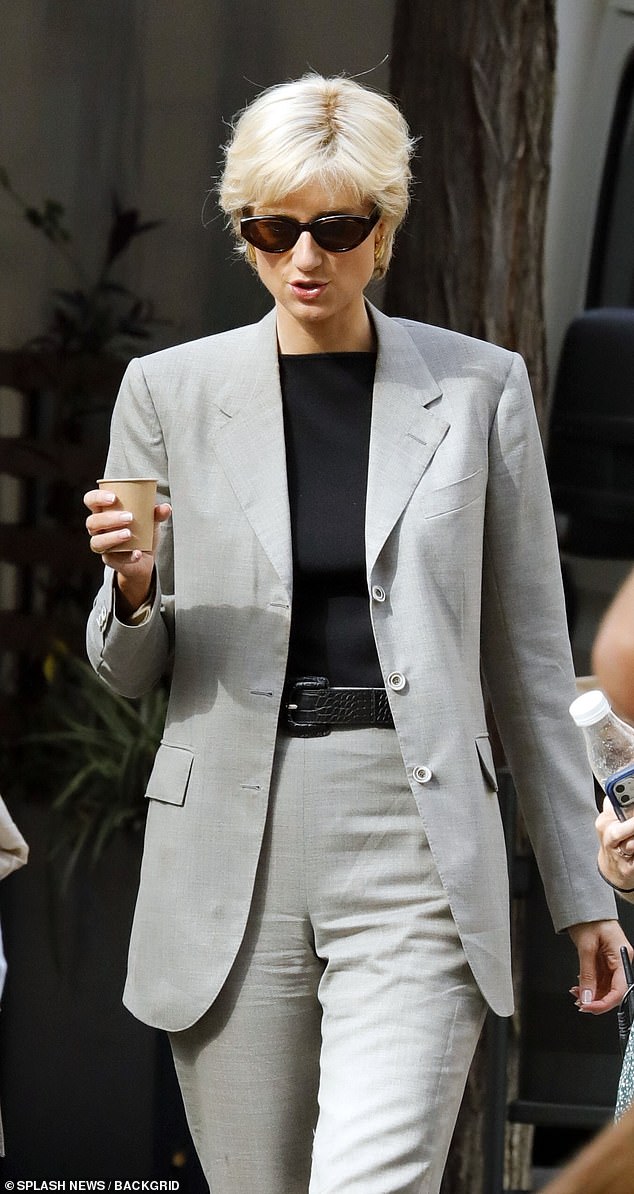 The actress, 32, looked cool and collected behind sunglasses as she walked across the set carrying a drink, while wearing a suit identical to the one worn by Diana in her final moments 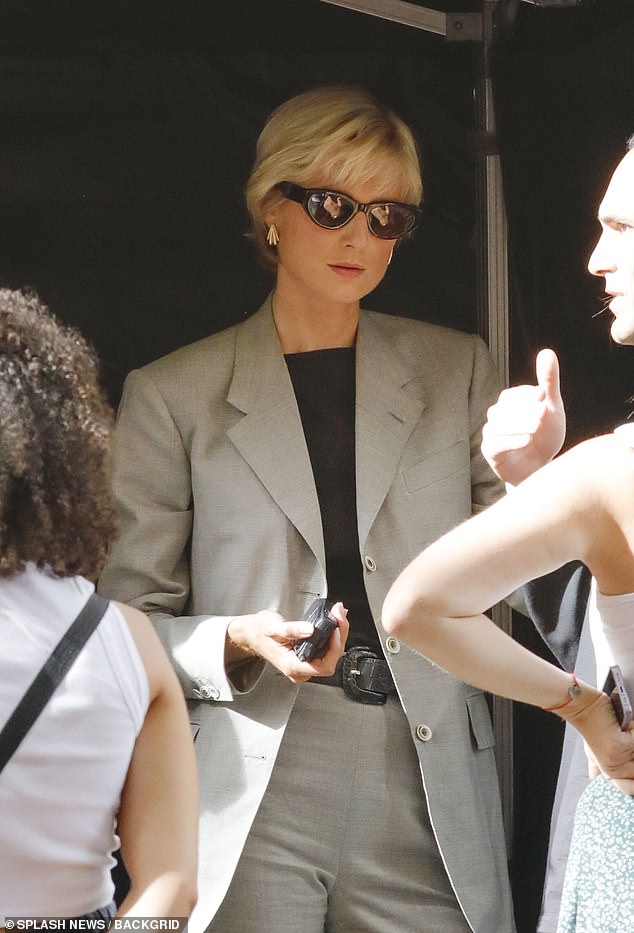 The sixth series of The Crown will feature the last days of Princess Diana, played by Debicki (pictured) including the St Tropez trip she took with Dodi Al-Fayed in July 1997 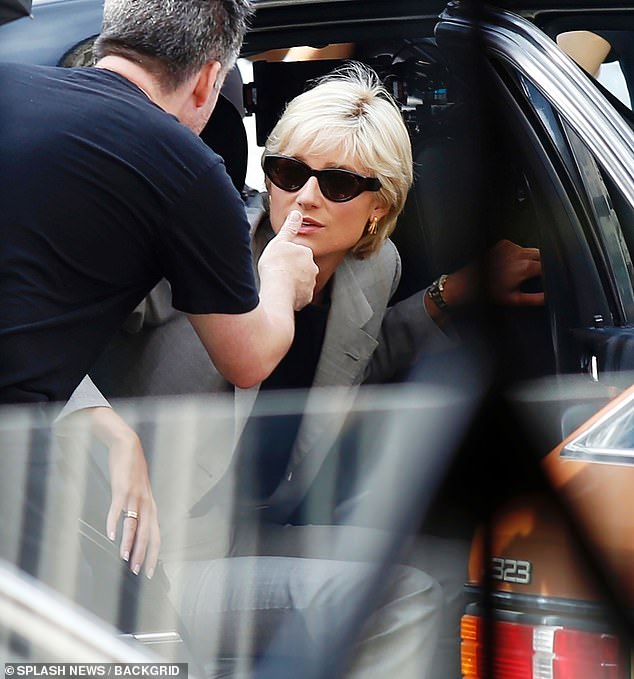 Debicki was pictured in the back of a car during filming, which suggests the crew was producing scenes of the moments leading up to the fatal car crash in the Pont d’Alma tunnel in central Paris 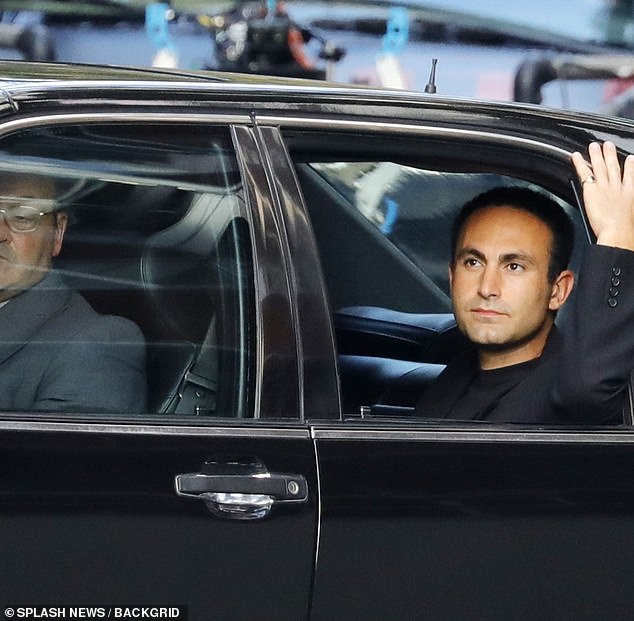 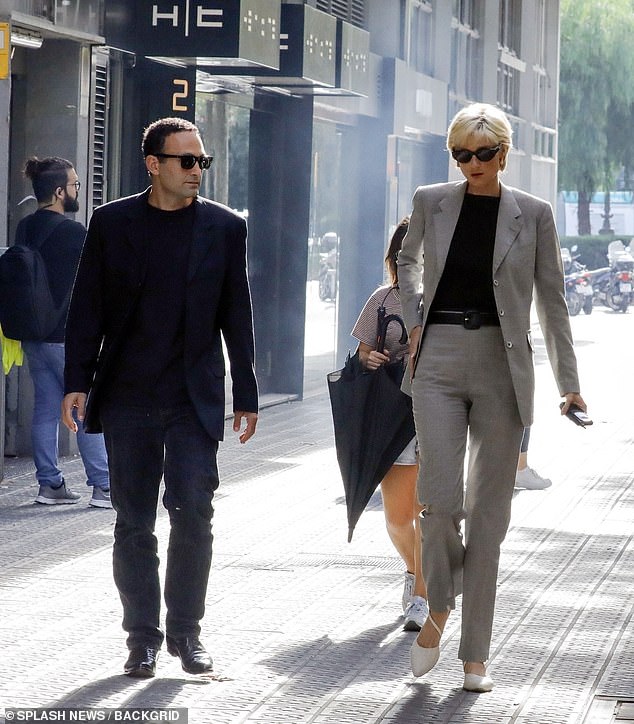 The pair were spotted walking through the streets of Barcelona, which will depict Paris in the sixth season of The Crown, in what appears to be a dramatised version of events from that afternoon/evening 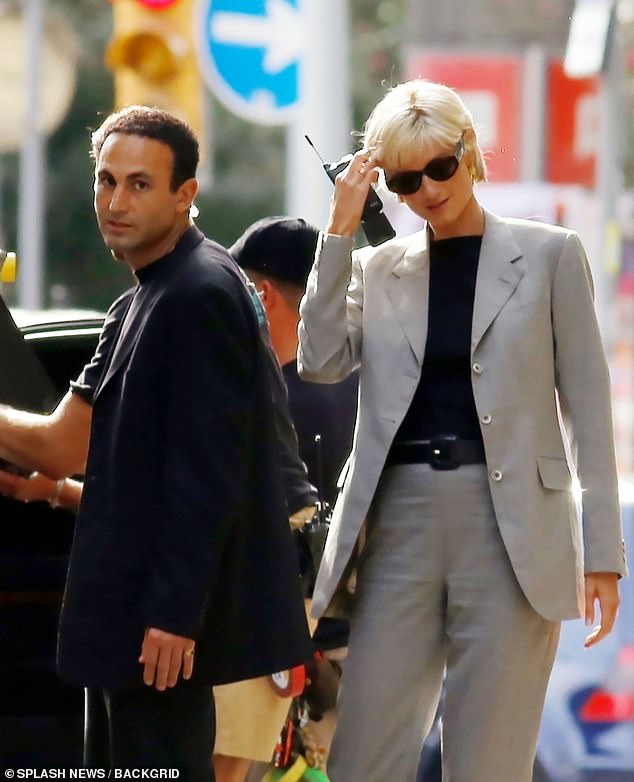 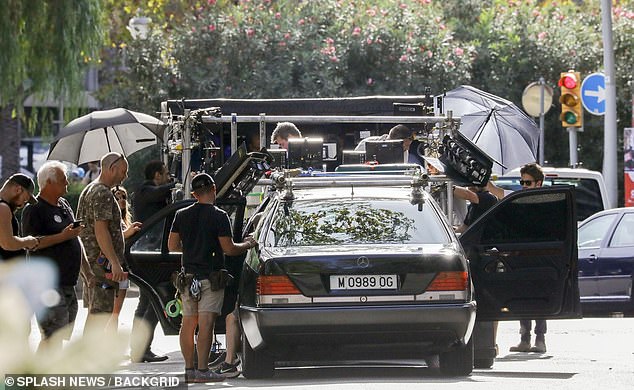 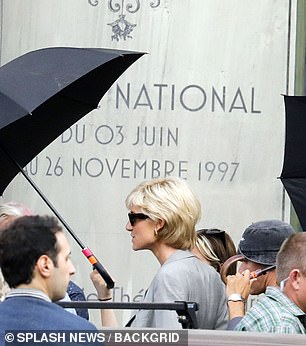 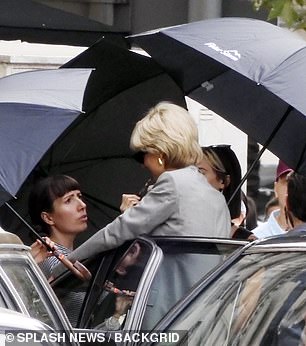 The actress (pictured centre) looked the image of Princess Diana with coiffed hair and sunglasses, plus a pair of small gold hoops. Behind her, a memorial has been inscribed with French writing 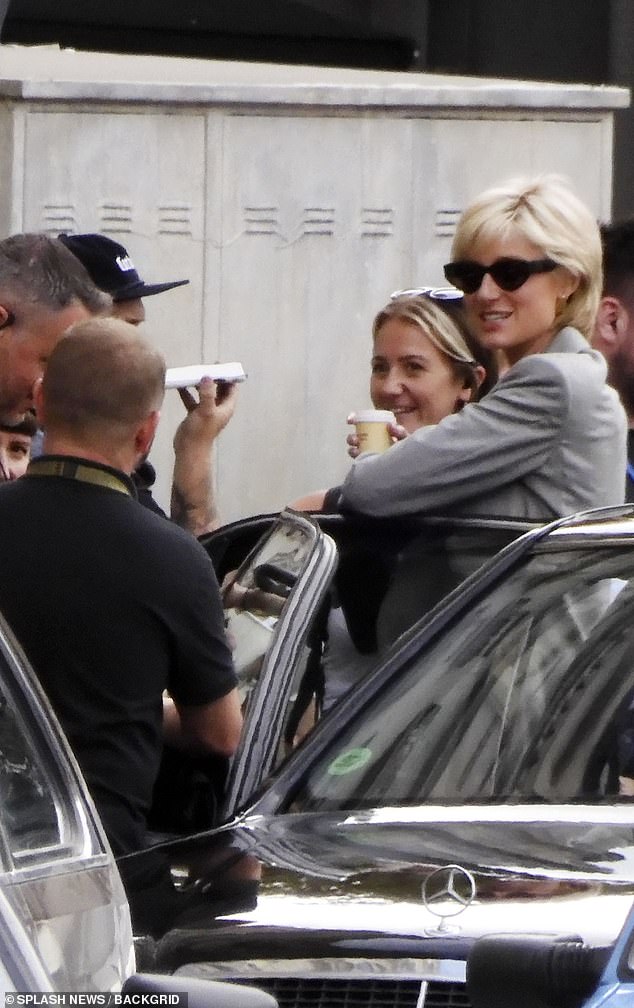 This weekend, local press in Barcelona reported series chiefs would be recording the events leading up to Diana’s ill-fated 1997 trip to Paris when she died in an underpass crash.

However, Netflix has insisted the crash itself will not be shown in the series.

Catalan online news website NacioDigital, claiming the September 9 suspension had led to a change of venue from an elegant avenue of gardens called the Jardinets de Gracia, said: ‘The producers of the series wanted to carry out one of the most critical moments in the history of the British monarchy in the Jardinets de Gracia, the death of Diana in a traffic accident. 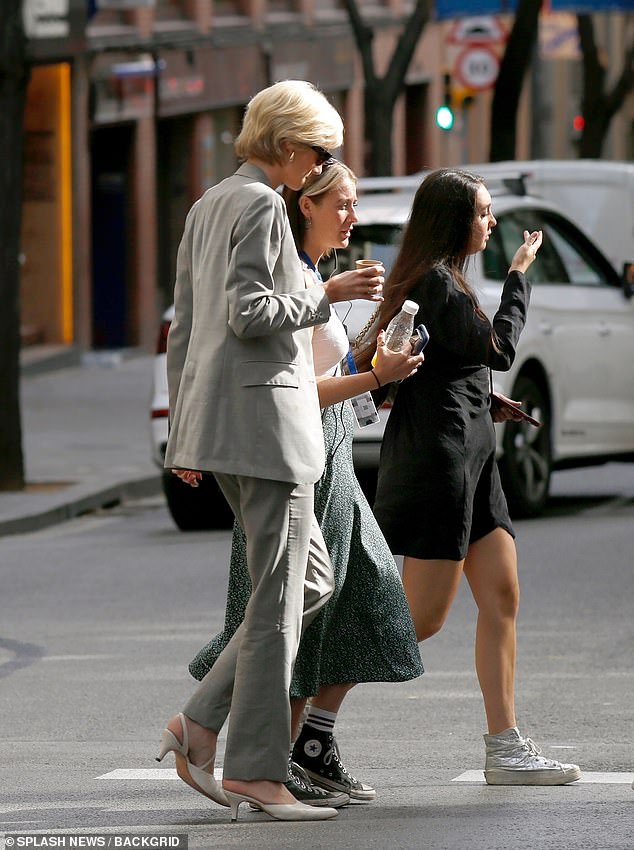 Debicki looked calm and collected as she strolled across the set on the streets of Barcelona, where she is filming perhaps the most controversial scenes The Crown has ever shot 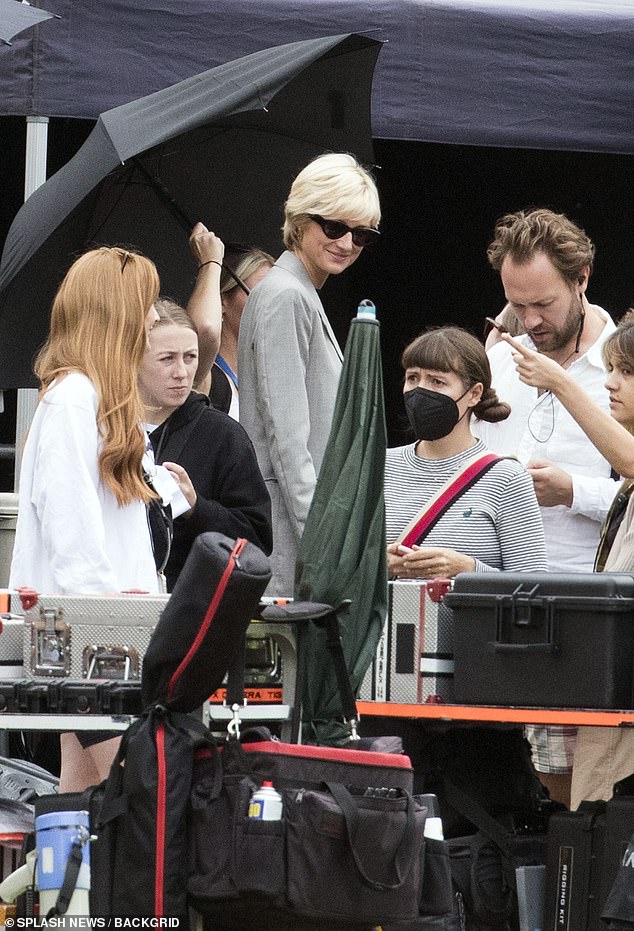 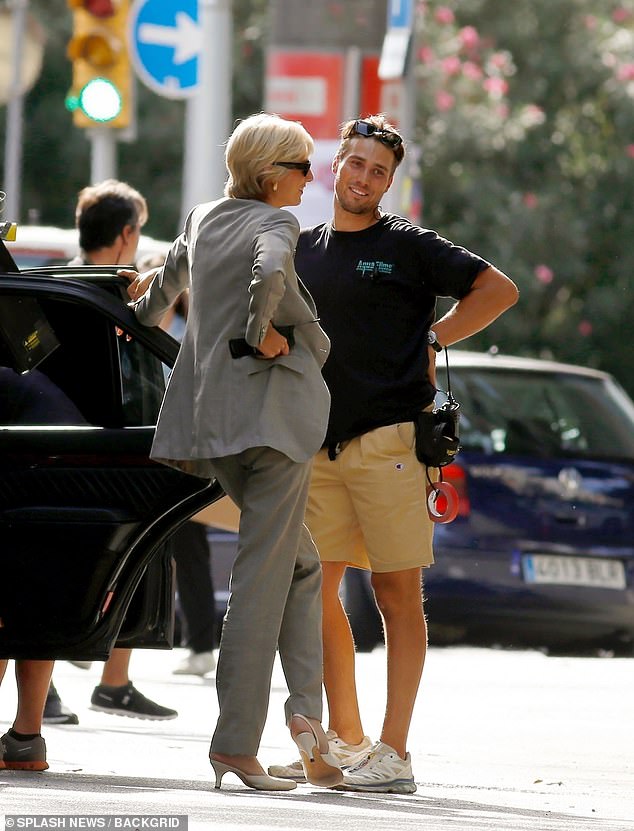 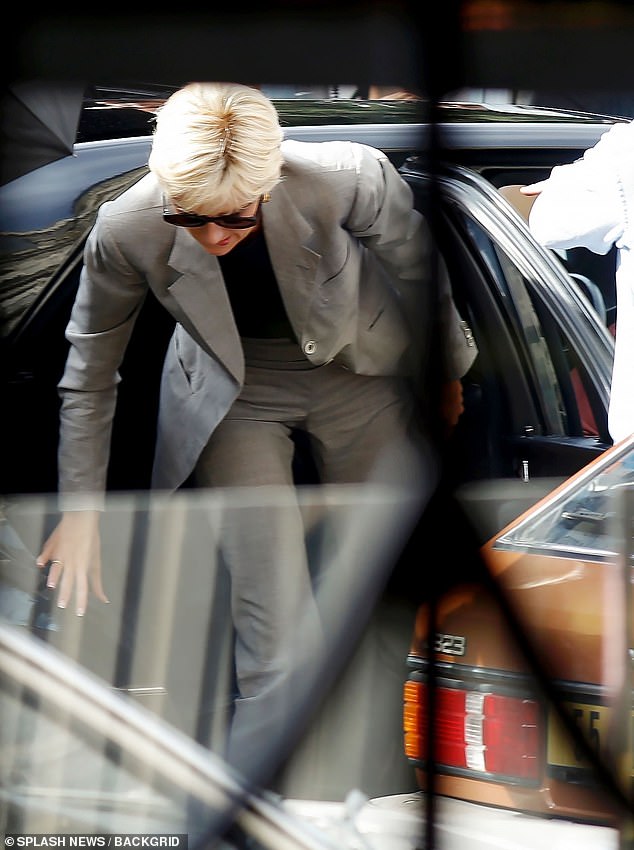 Debicki looked elegant as Diana as she slipped out of the back of a car, where it is thought she filmed scenes leading up to the Princess’s car crash – as Netflix insists the crash itself will not be shown 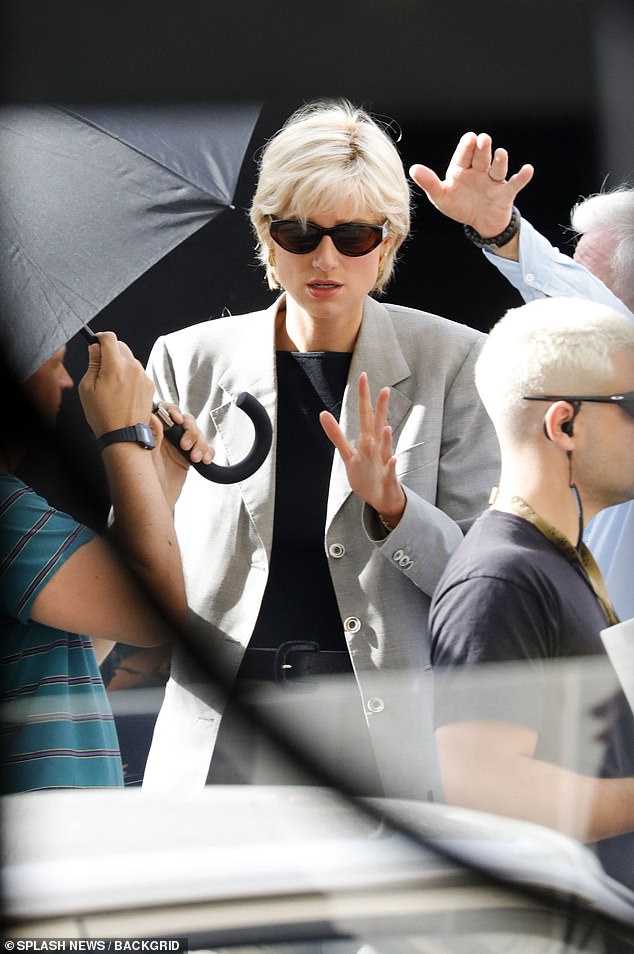 Debicki (pictured) appeared deep in concentration as she prepared to film the scenes amid controversy surrounding series five of The Crown, after the trailer was released this week 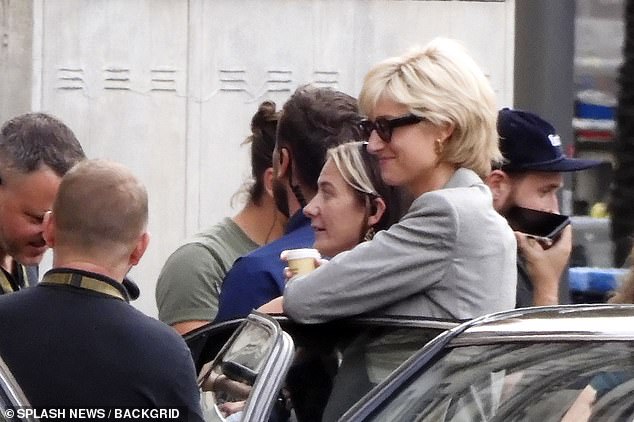 A cuddle onset! Debicki showed her appreciation for fellow crew members as she pulled a owman in for a hug from behind

Adding a Catalan TV and radio reporter had been able to get closer to the set of The Crown to give more details of filming, it added: ‘In this legendary city square they shoot the critical moment when the paparazzi chase Lady Di’s car through Paris.’

Netflix insisted recently: ‘The exact moment of the crash impact will not be shown.’

Last week it was forced to defend the series after former British PM John Major lashed out at a storyline showing King Charles plotting to oust his mum.

Oscar-winning actress Dame Judi Dench has also criticised The Crown and expressed fears it will present ‘an inaccurate and hurtful account of history.’

As the trailer for the fifth series was released earlier this week, fans of the show got a sneak peek at how the breakdown of Prince Charles and Princess Diana’s marriage will be dramatised onscreen.

Throughout the trailer, emphasis is placed on pressure the royal family faced during the 1990s as the marriage between Prince Charles and Princess Diana broke down – while also covering the late Monarch (Imelda Staunton) and her reaction to the Windsor Castle Fire of 1992.

lt will also include an entire episode focusing on Diana’s controversial sit-down interview with BBC journalist Martin Bashir in 1995, in which she sensationally said ‘there were three of us in the marriage’ – a reference to Charles and Camilla.

Over the first three series of The Crown, the Netflix hit has become well known for bending facts to suit its narrative, and while some artistic license is inevitable, some critics have been outraged in its rewriting of history and relationships.

But in its most controversial series yet, the brand new trailer declares that the ‘royal family is in genuine crisis’, as it depicts at-the-time Prince Charles and Diana’s divorce.