Even elephants get hangry! Animals happily work together on tasks – unless food resources are limited, study finds

We can all get a little ‘hangry’ from time to time when forced to operate on an empty stomach.

And it appears elephants are no different.

They happily work together on tasks and have evolved strategies to mitigate competition in their social groups, but cooperation breaks down when food resources are limited, a new study has found.

‘We found that Asian elephants have a diverse repertoire of behaviours to use when cooperating with others, and are careful about how to mitigate competition based on their relationships,’ said Li-Li Li, who led the research with colleagues from the Chinese Academy of Sciences in Yunnan, China.

‘This is an exciting demonstration of how flexible and socially intelligent elephants are!’

Asian elephants happily work together on tasks but cooperation breaks down when food resources are limited, a new study has found

Researchers studied nine semi-wild Asian elephants at the Myaing Hay Wun Elephant Camp in Yangon, Myanmar, putting them through their paces with a series of tasks.

The first one saw the animals offered two trays of food which could only be accessed by pulling two ropes simultaneously – a challenge requiring two trunks.

They found that pairs of elephants successfully cooperated in 80 per cent of trials.

Some elephants tried to cheat, for example by ‘freeloading’ and stealing part of the reward from another cooperating pair.

However, while competitive behaviours were common, elephants also used mitigation strategies such as fighting back or moving sides to prevent cheating and maintain cooperation.

Next, the researchers repeated the trials with a single food tray, meaning that one partner could dominate the reward and leave the other with no food.

This more competitive scenario provoked more costly and feisty behaviour from the elephants, including fighting, with cooperation quickly breaking down as the animals sought to gain access to the reward for themselves.

The study sheds light on the evolution of cooperative behaviour in mammals.

Similar outcomes have also been found in non-human primates, suggesting that distantly-related species have evolved similar strategies to maintain cooperation in their social groups, the authors said. 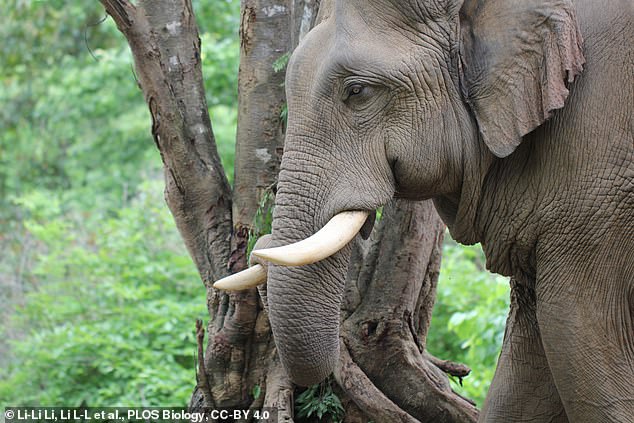 Researchers studied nine semi-wild Asian elephants at the Myaing Hay Wun Elephant Camp in Yangon, Myanmar, putting them through their paces with a series of tasks

Unlike many primates, elephants are browsers and grazers that are unlikely to encounter monopolisable food resources in the wild, which may explain why cooperation broke down in the more competitive scenario.

The Asian elephant is classified as endangered on the IUCN Red List of Threatened Species.

It’s under increasing pressure in the wild due to habitat destruction through human population growth, according to the Zoological Society of London (ZSL).

As the human population continues to grow, elephants have less space to live naturally and are forced into smaller areas and more conflict events with people.

The study is published in the journal PLOS Biology.