A NASA technique developed for missions to the moon, Mars and beyond can also charge an electric vehicle on Earth in just five minutes by ‘cooling’ heat generated by the current-carrying conductor.

Using NASA’s Flow Boiling Module as a blueprint, researchers at Purdue University dramatically reduced the amount of heat traveling through wires to push 1,400 amperes, the unit of electric current through cables. This is compared to the 520 amperes delivered by the most advanced chargers.

Because it can take at least 20 minute to power a vehicle at a station, many people have opted to stick with their gas guzzlers because of the convenience. But this new system charges a car faster than it takes to fuel up at the pump.

This technology would be welcomed by states like California and New York that are banning the sales of new gasoline-powered cars by 2035.

Using NASA’s Flow Boiling Module as a blueprint, researchers at Purdue University dramatically reduced the amount of heat in traveling through wires to push 1,400 amperes, the unit of electric current through cables

The NASA-made system was initially built for the International Space Station, where it has been tested in microgravity to ensure its success on future space missions.

The idea is that the orbiting laboratory, and other craft, will need technology that can efficiently transfer heat throughout systems – otherwise the mechanics could burn up.

This sparked the interest of Issam Mudawar, a professor of mechanical engineering at Purdue, who constructed a prototype in 2021 that was announced on Tuesday to be successful in powering electric vehicles. 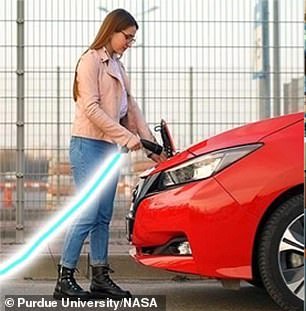 Using an alternative cooling method, Purdue researchers designed a charging cable that can deliver a current 4.6 times that of the fastest available EV chargers on the market today by removing up to 24.22 kilowatts of heat.

The module also resembles a real-world charging station, as it includes a pump, a tube with the same diameter as an actual charging cable, the same controls and instrumentation, along with the same flow rates and temperatures.

‘Application of this new technology resulted in unprecedented reduction of the time required to charge a vehicle and may remove one of the key barriers to worldwide adoption of electric vehicles,’ NASA shared in a statement.

As US states beat the drum to ban new gas cars, many are weary about how the plan will be carried out with the uncertainty of the number of charging stations needed to provide tens of thousands of new electric vehicles with enough power to ensure they get from Point A to Point B.

California was the first to implement the mandate last month that requires 35 percent of new passenger vehicles sold in the state by 2026 produce zero emissions, then 68 percent by 2030 and ultimately 100 percent five years after.

However, more than 17 million vehicles registered in the state are those after 2010, 3.2 million are hybrids and at least 700,000 are all-electric.

New York, which joined the west coast state last week, is following the same quota to reach a total ban in 2035.

But how it plans to charge thousands of electric vehicles in a city that lacks private driveways still remains a mystery.

There are just 677 charging stations spread across the five boroughs and although the city is set to add 10,000 curbside chargers by 2030, it may not be enough to power the thousands that will be cruising around by 2030 – 68 percent of all new cars sold this year will be electric.