An ‘electric nose’ capable of sniffing out hard-to-detect cancers with 95 percent accuracy may soon change the way specialists diagnose the potentially fatal disease.

Scientists at the University of Pennsylvania designed an artificial intelligent-powered system equipped with nanosensors to identify vapors from blood samples that are specific to benign, pancreatic and ovarian cancer cells.

The tool also correctly identified all patients with early-stage cancers and did so in less than 20 minutes – traditional methods can take days or weeks to produce results.

To test the electric nose, the team analyzed samples from 93 patients.

The technology uses pattern recognition that has a similar approach to the way people’s own sense of smell works, where a distinct mixture of compounds tells the brain what is smelling.

Scientists at the University of Pennsylvania designed an artificial intelligent-powered system equipped with nanosensors to identify vapors from blood samples that are specific to benign, pancreatic and ovarian cancer cells (stock)

Traditional methods were detecting cancer in patients requires specialists to take a biopsy, which may come from the abdomen, bone marrow or other parts of the body.

Once collected, the sample is then sent to a lab where it is analyzed by a pathologist who determines whether the tissue removed has a tumor and if so, what type it is, according to Cancer.net.

This can take as few as two to three days or as long as seven to 10 days, depending on how complicated the situation may be.

However, the innovation from the University of Pennsylvania may change the entire process, making it faster and easy to perform. 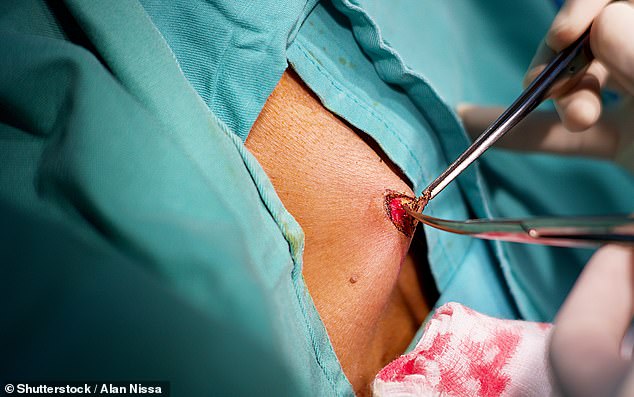 Traditional methods were detecting cancer in patients requires specialists to take a biopsy, which may come from the abdomen, bone marrow or other parts of the body. However, the ‘electric nose’ analyzes blood samples from the patient

Charlie Johnson, the Rebecca W. Bushnell Professor of Physics and Astronomy in Penn’s School of Arts & Sciences, said in a statement: ‘It’s an early study but the results are very promising.

‘The data shows we can identify these tumors at both advanced and the earliest stages, which is exciting.

‘If developed appropriately for the clinical setting, this could potentially be a test that’s done on a standard blood draw that may be part of your annual physical.’

Johnson and his team based their system on the idea that all cells release volatile organic compounds (VOCs) that emanate from body fluids – in this case the team is looking at blood samples.

Previous studies from the researchers demonstrated that VOCs released from tissue and plasma from ovarian cancer patients are distinct from those released from samples of patients with benign tumors.

The team’s collaboration with Richard Postrel, CEO and chief innovation officer of VOC Health, has also led to an improvement in detection speed by 20 fold.

‘Collaborating with researchers from the department of Physics and Astronomy, the Perelman School of Medicine, and Penn Vet has allowed us to perfect and integrate our own innovations – expediting the commercialization process,’ Postrel said.

‘Initial prototypes of commercial devices able to detect cancer from liquids and vapors will be ready soon and be provided to these Penn researchers to further their work.’