One of the biggest concerns among motorists when it comes to making the switch to electric cars is running out of battery.

However, a new study has revealed that an EV driven for so long that the battery charge is emptied and the dashboard display shows zero miles of range remaining can keep going for up to 19 miles before coming to a halt.

What Car?, which conducted the research by testing 10 of the latest electric models, said manufacturers are deliberately programming range readouts to be conservative to give drivers ‘an emergency buffer’ before running out of battery entirely.

Relief from range anxiety: Recent controlled tests of 10 of the latest electric cars on the market has found that they can keep going for between 5 and 19 miles after drivers are told the battery range is down to zero

The motoring title put 10 electric cars’ ranges to the test in summer conditions to see how far they could travel on a fully-charged battery in the most optimum UK temperatures.

It found that the best was 8.1 per cent shy of its claimed single-charge range while the worst was almost a fifth (18.6 per cent) short of their official WLTP averages.

In each case, though, the figure was helped by the vehicle continuing to run for several miles after the instrumentation said there was nothing left in the battery, with car makers appearing to keep aside a few kilowatts of power to act as a fuel reserve.

While traditional petrol and diesel cars can keep going for around 25 to 45 miles when the fuel light comes on, the big fear is that electric models will conk-out immediately when the range readout hits the dreaded 0 per cent.

However, that’s simply not the case, as What Car?’s tests have found.

Of the cars assessed, the £54,980 BMW i4 eDrive40 M Sport not only travelled the furthest distance on a charge but also had the biggest emergency buffer.

It can travel a total of 316 miles (29 miles short of the official 345-mile claim), and 19 of those miles were completed with the digital readout saying there was zero range remaining, the tests revealed. 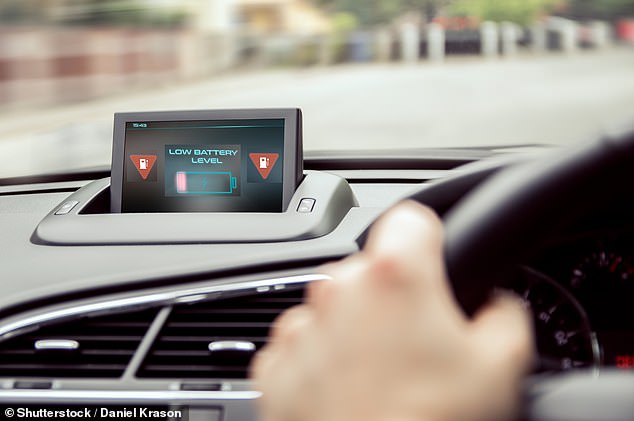 What Car? says manufacturers are deliberately programming range readouts to be conservative to give drivers ‘an emergency buffer’ before running out of battery entirely 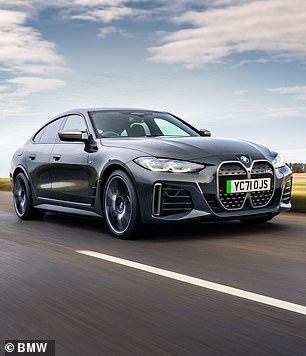 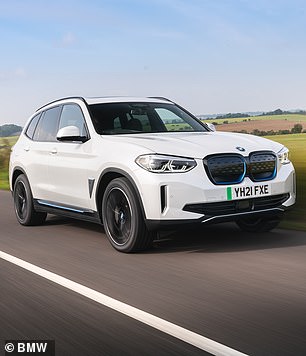 The BMW i4 (left) can go for 19 miles after the onboard computer tells a driver that they are out of battery range, while the bigger iX3 (right) manages just 5 miles, What Car? found 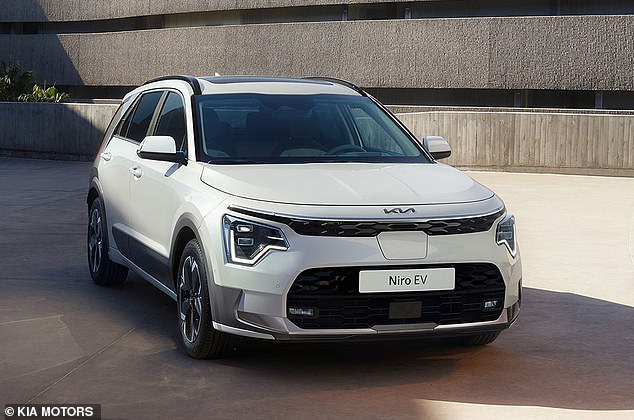 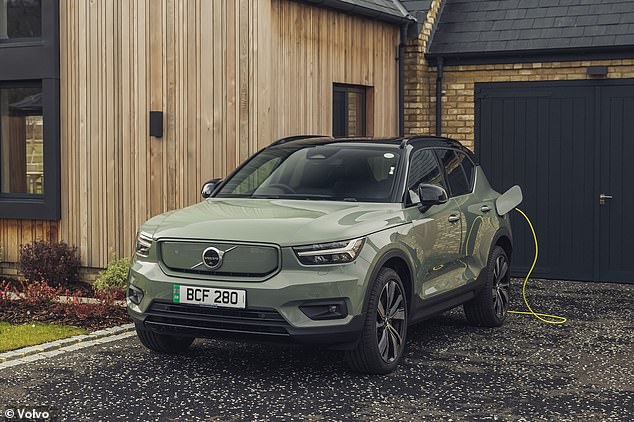 How far can a petrol or diesel car go when the fuel light comes on? 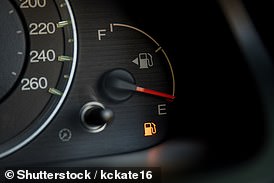 According to independent information submitted by drivers on TankOnEmpty.com, when the fuel light comes on a VW Golf can keep going for an average of 44 miles, an Audi A4 43 miles and a Ford Focus 42 miles.

Range Rover owners claim they get another 40 miles on reserve, while drivers of Ford Fiestas can keep going for 37 miles on average.

Audi TTs can continue for another 30 miles and even a high-performance V8-engined Ford Mustang can plod on for another 26 miles.

The figures quoted here should be taken with a pinch of salt and different fuel types, engine sizes and specs means these claims should not be used as a guarantee of how far you can keep driving with the fuel light on.

While a BMW topped the charts, it was another model from the Bavarian brand – the £65,865 iX3 M Sport Pro SUV – that had the smallest range reserve, measured at just 5 miles.

Steve Huntingford, WhatCar? editor, said: ‘The fear of what will happen if you run out of charge in an electric car continues to put many people off making the switch, but our test showed that you not only get plenty of warning, but that even when the range readout hits zero, you’ve still got plenty of time to make it to a refuge area or find somewhere else safe to stop.’

The study found that Cupra’s Born hatchback – which is a rebranded Volkswagen ID.3 – had the shortest summer range of the 10 cars tested, with a measured 219 miles compared to a claim of 249 miles.

However, Tesla Model 3 – the second most-bought new car in 2021 and one of the best-selling electric cars in Britain so far this year – that has the biggest range shortfall compared to claims.

The Model 3 fell furthest from its claimed range, measured by What Car? as being able to cover 293 miles on a single charge compared to an ‘official’ figure of 350 miles – a 57-mile – or 18.6 per cent – range deficit. 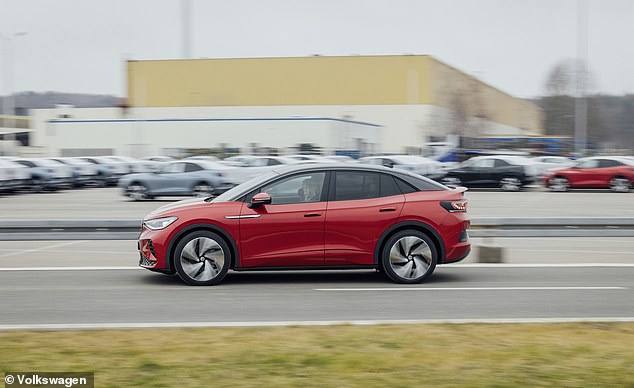 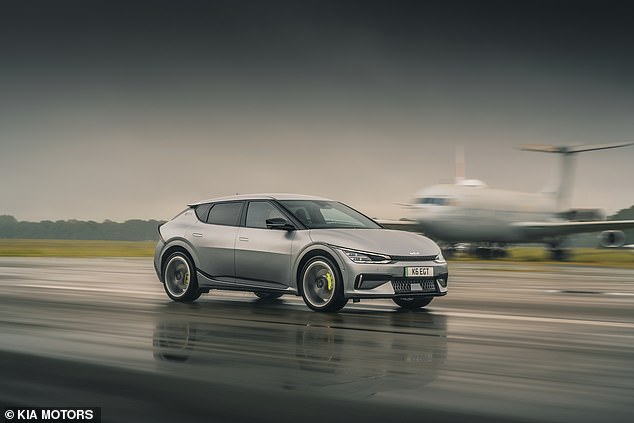 Kia’s EV6 is a stylish electric family car. Owners with a bout of range anxiety when the computer says the battery is flat will get an extra 13 miles, according to What Car? 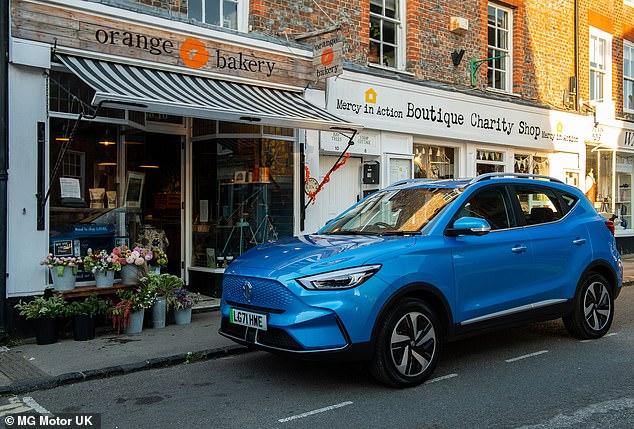 Of all 10 cars tested, the MG ZS EV Long Range SE is the cheapest at less than £30l. It can manage 13 miles using its emergency buffer

Three of the cars tested during the summer months have also been put through their paces by What Car? in its most recent winter range test – providing a direct comparison of efficiency based on the seasonal temperatures.

On average, the trio went 49 miles (21.4 per cent) farther in the summer range test, when the air temperature ranged from 24 to 29 degrees Celsius, than in winter, when it was 3 to 7 degrees. 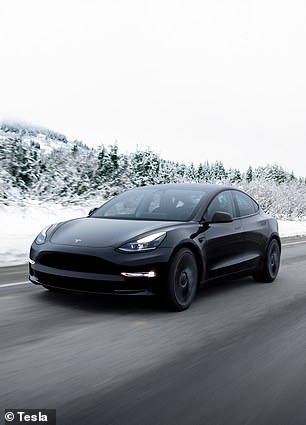 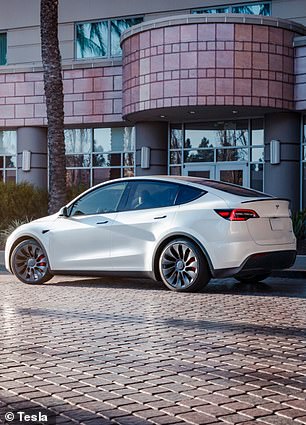 The Tesla Model 3 (left) and Model Y (right) are two of the most popular EVs in Britain right now. The Long Range versions of both were tested and found to have 13 and 11 miles in reserve respectively 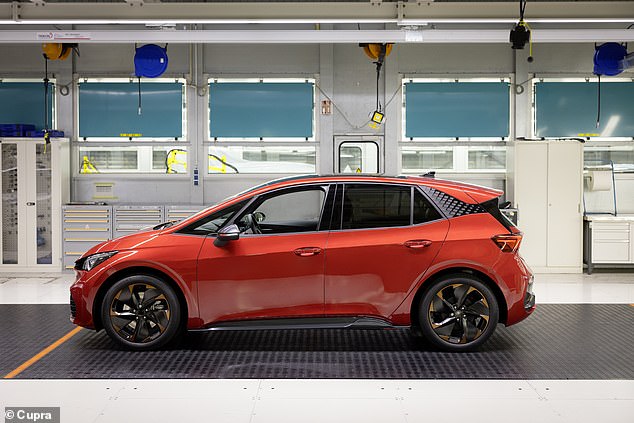 The Cupra Born – which is a rebranded VW ID.3 hatchback – can cover 11 miles even when the onboard computer says the battery is out of charge

Previous research by What Car? found electric cars equipped with a heat pump lose less range when temperatures drop, with the heat pump drawing excess heat from the electric drivetrain and distributing it around the interior of the car through the air conditioning, reducing the strain on the battery.

The tests were conducted on a closed vehicle proving ground, on a 15-mile route consisting of 2.6 miles of simulated stop-start urban traffic, four miles of steady 50mph driving and eight miles driving at a constant speed of 70mph, to simulate motorway journeys.

Each of the 10 cars was fully charged and left outside for 15 hours, before being plugged in again to check the batteries were still at 100% for the start of the test.

They then had their climate control systems set to 21 degrees and were driven until they ran flat, with driver swaps at the end of each circuit, and the cars’ positions also changed to ensure no car was constantly punching a hole in the air to improve aerodynamic efficiency for the others.

A new report has claimed that electric vehicles are a fifth less expensive to maintain than petrol and diesel alternatives based on the servicing bills for hundreds of thousands of cars being driven on Britain’s roads.

Fleet Assist says it has reviewed the servicing receipts for its 850,000 fleet cars and vans and found that the average transaction value of an electric car service is around 22 per cent less than an equivalent internal combustion engine (ICE) model.

It says much of this is due to shorter labour time required to work on EVs, which take a third less time to service than a car with a petrol or diesel engine due to the fact they have fewer moving parts.

The report adds that component replacement costs during a service of electric cars are also typically 28 per cent cheaper than an ICE car, for instance the braking parts needing changing less often due to a lower level of wear and tear.

When considering parts prices, which have risen by around 10 per cent in the past 12 months, the cost gap between EVs and ICE cars has widened. 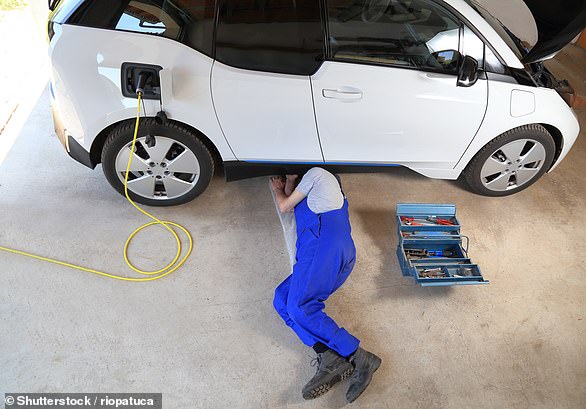 But despite this evidence, it does not guarantee that EV servicing prices will reduce dramatically as dealers look to raise costs to retain their profitability.

Dealers are starting to feel the pinch of reduced servicing revenues as drivers cover fewer miles which coincides with a rapid rise in operating costs, particularly technician salaries.

‘Garages are already starting to come to terms with how EVs will impact their servicing revenues and workshop traffic in the longer term. We may see more garages looking at ways to address how the paradigm shift of EV aftersales is going to challenge their service provision and fees they charge,’ he said.

Fleet Assist added that it was recently contacted by a franchised garage that was considering implementing a specific electric vehicle servicing labour rate of £125 – an 89 per cent increase on the flat rate for a petrol or diesel car.