Park & charge? Not likely! A new report has found that fewer than half of all commuter car parks have at least one electric car charger

Fewer than half of all commuter car parks in Britain have an electric vehicle charging point, according to a new investigation.

Just 44 per cent of all large business parks, popular train stations and park & ride locations in major cities were found to offer charging facilities, in the latest damning report on the nation’s lacking public infrastructure.

The research uncovered that of the 12,000 parking spaces checked, less than one per cent had an EV chargepoint.

The investigation was carried out by the Electric Car Scheme in its inaugural Commuter Car Park Report – yet another piece of research highlighting the UK’s desperate need for more to be done to help motorists make the switch to electric vehicles, ahead of the 2030 ban on sales of petrol and diesel cars.

With over a third of properties in the UK not having off-street parking, millions of future drivers will depend on being able to charge their cars at public devices.

However, this latest report proves that boosting batteries while at work or travelling into cities isn’t currently a viable option.

With fewer than 36,000 public charging devices currently operational in Britain, the Government is facing intensifying pressure to provide funding and support for local authorities to install thousands more.

MPs have pledged to have 300,000 public charging points in place and usable by 2030, but currently only around 875 a month are being added to the infrastructure.

In order to meet its ambitious target by the end of this decade, the Government needs to increase the average rate of device installations to 3,015 per month – a monumental uplift of 245 per cent.

The Electric Car Scheme found that commuter car parks in Scotland offered more charging points to EV owners than those in England, with 60 per cent of sites in Scotland having at least one device, compared to 44 per cent in England and just 25 per cent in Wales.

This mirrors the overall statistics for chargepoint availability in the UK, with Scotland enjoying 60 charge points per 100,000 people – well above England’s 53.

That said, a recent BBC investigation over a two-month period found that a quarter of chargepoints in Scotland were faulty, with EV owners unable to use them. 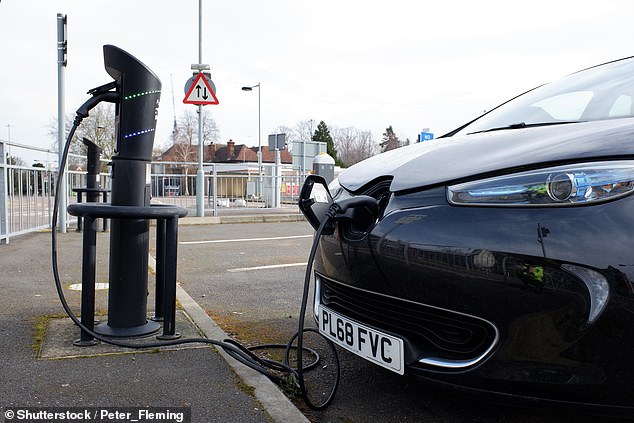 A staggering 56% of all large business parks, popular train stations and park & ride locations were found to offer no charging facilities. It’s the latest damning report for the nation’s public EV charging infrastructure

Thom Groot, co-founder of the Electric Car Scheme, said the infrastructure needed to move much faster in order to meet the UK’s net zero goals.

‘It’s worrying that only one per cent of public car spaces in commuter belts offer charging points, when currently 16 per cent of new cars sold are electric,’ he said.

‘Fossil fuel car infrastructure has had a century-long head-start, so we need everyone to pitch in to help make the switch as smooth as possible.

‘And the Government should move urgently to extend the tax benefit that currently makes leasing new electric cars attractive for employees – which is currently set to run out in 2025.

‘Germany has guaranteed its similar rate until 2030, giving those signing up for multi-year leases a lot more certainty as they are the first into the water while infrastructure is not fully up and running. Why can’t the UK do the same or better?’

Last week, Zap-Map published results of its annual charging networks satisfaction survey – the biggest and most informative of its kind for EV drivers in the UK.

Fastned and MFG EV Power scored the joint highest scores, which was based on the feedback from 4,300 owners of battery-powered vehicles.

At the opposite end of the spectrum, it was bad news for two of the biggest oil giants, with BP and Shell – both of which recently announced soaring profits – seeing their networks slip towards the bottom of the league table.