Number of electric car drivers running out of battery halves in two years: Just 4% of breakdowns AA attends are now for EVs with zero charge

Concerns over range anxiety is rapidly becoming a thing of the past and fewer electric car owners are running out of battery while on journeys, the AA says.

The proportion of EVs rescued by the breakdown assistance company for being ‘out of charge’ has halved in the last two years from 8 per cent to under 4 per cent as motorists become more accustom to the requirements of running a car powered entirely by batteries.

Edmund King, the motoring group’s president, says the theory that EVs run out of battery ‘doesn’t match reality’ and shouldn’t put people off switching from their petrol and diesel cars.

And in a passing dig at the combustion engine, he says older diesel cars will soon be looked at ‘the same way we now think about smoking on the top deck of a bus’.

What range anxiety? The AA said fears of electric cars running out of battery is no longer a significant concern with less than 4% of its annual recovery callouts for running out of charge

Around half of the 4 per cent of EV-owning customers the AA classifies as an ‘out of charge’ recovery callout have not actually ran the battery to zero per cent but are at low level and fear they won’t make it to the next available charging point.

It says the most common reasons for electric cars to breakdown is exactly the same as with petrols and diesels, namely issues with the 12v battery and tyre woes.

Other EV faults are quite different and cover things such as charging equipment, warning lights, battery monitoring systems or key transponders.

‘In twenty years of driving EVs I have only run out of charge once,’ explains AA president Edmund King, who currently runs an all-electric Porsche Taycan.

‘My first EV was a Ford Think! with a 37-mile range and I once tried to drive from central London to St Albans on a dark, rainy night and didn’t quite make it.

‘Yes, there have been occasions when I have been low on charge or come across chargers out-of-order, but it is hard to run out.’

In Norway, which has a much higher concentration of EVs than the UK, the percentage of out of charge cases has dropped to just 1 per cent as its drivers become acclimatised to owning cars powered entirely by batteries.

King says this is because most electric cars are also well equipped to alert drivers to when they are at risk of running out of battery – and have a number of mitigating failsafes.

The latest EVs have a warning light that illuminates when the battery capacity drops to 20 per cent and others will automatically re-route your sat-nav journey via a charging device.

Others will also put the car into its battery-saving ‘range’ mode, which reduces acceleration and saps less energy.

‘Drivers shouldn’t get hung up about range anxiety because it doesn’t match reality,’ King added in his bid to promote the benefits of making a transition to plug-in cars.

‘Of course, improvements can and are being made to the charging infrastructure but a little planning can take you a very long way.

‘We are also now seeing EVs with much longer ranges and most new EVs can do at least 250 miles.’

He added: ‘Pretty soon, we will think of older diesel cars in the same way we now think about smoking on the top deck of a bus.’ 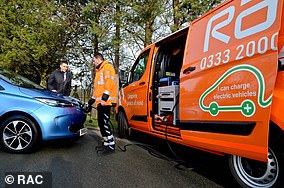 The RAC has announced that a fifth of its patrol vans will be equipped with emergency electric charging capability by end of the year – and they will be able to recharge batteries faster.

Its onboard ”EV Boost system has been uprated from 3.5kW to a 5kW charger and is capable of adding around 10 miles of range in around half an hour. A 7.5kW device is also being developed.

However, the RAC admits almost all of its fleet is running on diesel, as there isn’t an electric van on the market suitable for a recovery vehicle.

RAC chief operations director Paul Coulton said: ‘While we’ve put the UK’s first electric breakdown van into service in the form of a Renault Zoe, there isn’t currently an electric van on the market that can do everything that a diesel-powered one can in terms of towing broken-down vehicles and carrying 500 tools and parts.

‘So, even though we’re using a diesel van to recharge an electric car, we’re confident it’s faster, more efficient and better for the planet than having to send a big flatbed recovery vehicle or a van full of batteries.’