The number of electrified vehicles on Britain’s roads surged by 71 per cent to 748,349 over the past year, fresh data has revealed.

An electric car boom has led to a dramatic increase in EV uptake, according to the Motorparc study published by the Society of Motor Manufacturers and Traders.

The electric vehicles counted incorporate plug-in hybrids and pure electric. About three-quarters of a million vehicles on Britain’s roads now can be plugged in, including 720,053 cars, 26,990 vans, 993 buses and 313 trucks.

But, the vast majority of vehicles in service are still fuelled by petrol or diesel, and EV drivers are in the minority, making up just 1.85 per cent of the 40,506,971 on Britain’s roads.

EV use: The percentage of plug-in motors in use remains low in many parts of Britain

Taking into account all types of motors, vehicle numbers across Britain’s roads rose by 0.4 per cent to 40,506,971 last year, but car ownership rates actually fell by 0.2 per cent to just over 35million.

‘Plug-ins still only represent around one in 50 cars on the road, demonstrating the scale of the challenge ahead in convincing every driver to make the switch’, the SMMT said.

A third of all plug -in cars are registered in London and the South East, representing 3 per cent and 2.6 per cent of all cars in each area.

By contrast, 1.5 per cent of cars in the West Midlands are plug-in electric, 1.9 per cent in Yorkshire and Humberside, and 0.9 per cent in the North East.

The SMMT said: ‘Differences in uptake could also be seen across the four British nations, with plug-ins making up 2.2 per cent of cars in England, 1.6 per cent in Scotland, and 0.8 per cent in Wales and Northern Ireland.

‘However, the majority of plug-in cars are registered to businesses rather than people, while some 58.8 per cent of all electric cars on the road company registered, reflecting the fact that businesses receive broader, more generous incentives to make the switch than those offered to private consumers.’

This figure also reflects the number of electric cars bought under company leasse schemes, with workers now able to save substantial amounts if their employer offers a salary sacrifice scheme, thanks to low benefit in kind rates.

‘However, they still represent around one in 50 cars on the road, so there is significant ground to cover if we are to fully decarbonise road transport at pace.

‘The first consecutive annual fall in vehicle numbers in more than a century shows how significantly the pandemic has impacted the industry, leading Britons to hold onto their cars for longer. 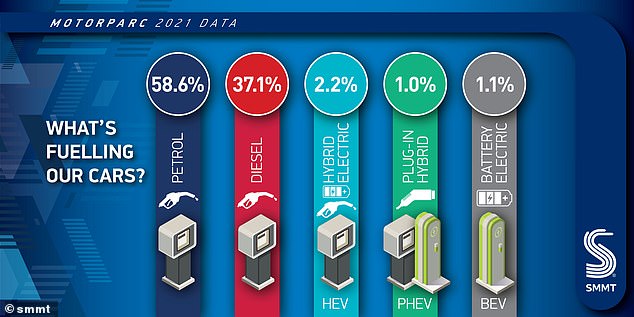 Fuel matters: Most motors in use across Britain are powered by petrol or diesel

According to the RAC’s new Charge Watch initiative, the average cost of charging an electric car on a public rapid charger has increased by over 20 per cent since September 2021, showing the impact the energy crisis is having on electric vehicle drivers.

Figures published last week showed a 7.81p per kWh increase from the end of last summer, taking average prices from 36.74p to 44.55p per kWh.

This means that the average cost to complete an 80 per cent rapid charge of a typical family-sized electric car with a 64kWh battery has increased by £4, from £18.81 to £22.81.

However, most electric car owners charge at home and this remains considerably more economical. The equivalent energy price cap electricy cost is 28p per kWh.

This marks the first consecutive annual drop in car ownership levels for 100 years, the SMMT said.

‘Global parts shortages are no doubt to blame for this, yet buyers hoping to leapfrog queues are well advised to investigate leasing a new car.

‘Because while dealers may struggle to get hold of fresh stock, leasing firms often do not experience difficulties to quite the same extent.

‘Plus, just as the SMMT’s figures show there are now three quarters of a million EVs on UK roads, carwow has seen an 87.6 per cent increase in enquiries from people wanting to lease an electric car in the first quarter of 2022.’ 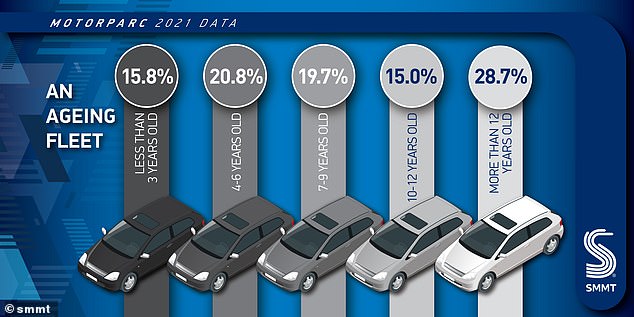 Older cars: On average, cars on the roads now are about 8.7 years-old, which is more than a year older than a decade ago, the SMMT said

Motorists are keeping cars for longer

The findings from SMMT have also suggested that ‘pandemic-related market disruptions’ prompted Britons to hold on to motors for longer.

On average, cars on the roads now are about 8.7 years-old, which is more than a year older than a decade ago, the SMMT said.

About 8.4million cars, equating to just under a quarter of all on the road, are over 13 years-old, having been in use since 2008.

Global shortages of key components like semiconductors have ‘constrained’ the new car market, the findings suggest, adding that closed car dealerships during multiple sporadic lockdowns had also played their part.

New car registrations remained ‘broadly static’ at 1.65million last year. But the number of light commercial vehicles on the roads, like vans, increased by 4.3 per cent to 4,804,833 last year.

And, the number of heavy goods vehicles on the roads, often needed for deliveries, increased by 2.5 per cent to 604,035.

Bus and coach numbers on the roads remained at the second lowest level since records began in 1994, amid lower consumer demand. 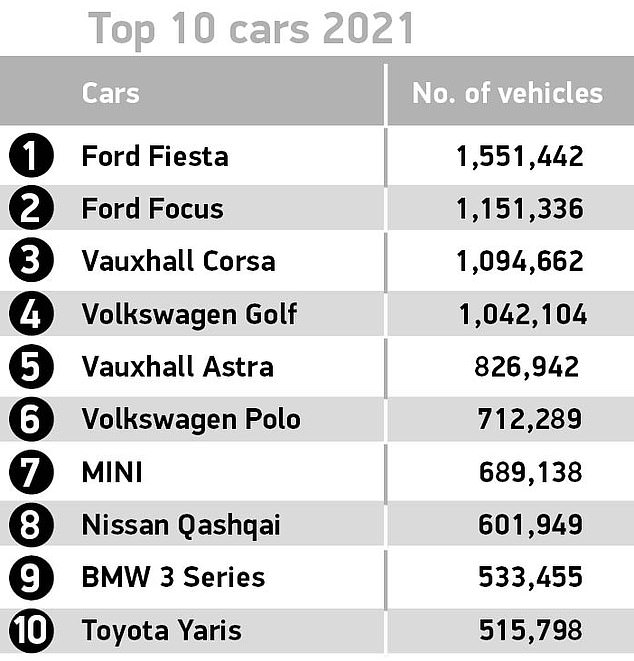 Popular: The Ford Fiesta is the most popular car on Britain’s roads, the SMMT said

The research from the SMMT also revealed that the Ford Fiesta, Ford Focus, Vauxhall Corsa, Vauxhall Golf and Vauxhall Astra were the five most common motors on the roads last year.

In terms of the most popular colour for cars, black, blue, silver, grey and white led the way in 2021, with brown and beige bringing up the rear.

Manual transmissions also still account for nearly 70 per cent of motors on the road, the SMMT said. 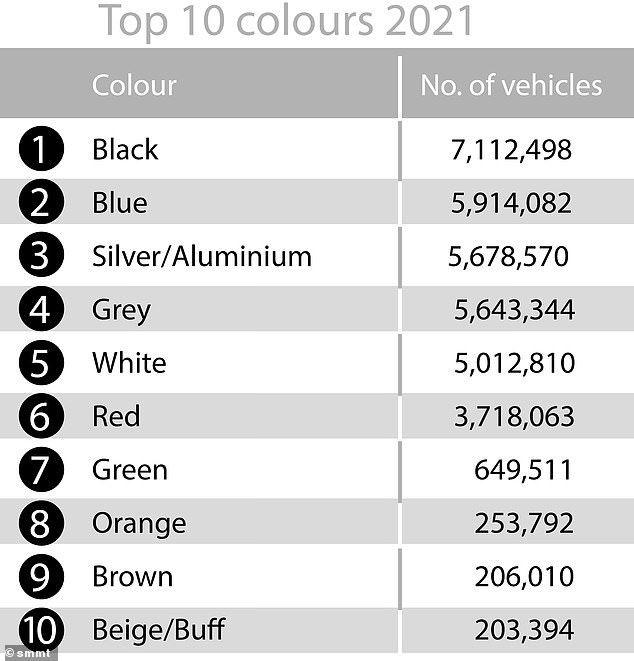 What’s your favourite? Black, blue and silver were the top three car colours for 2021