An elderly couple were left furious after they were faced with nearly 50 steps to access their dream holiday cottage – instead of just six pictured in the brochure.

Valerie and Bill Barrett had booked a rare trip away to celebrate their silver wedding anniversary which they believed had ‘easy access’ as he relied on a mobility scooter to get around.

Online pictures of the property, advertised by Sykes Holiday Cottages, appeared to show a short incline of just six steps to reach the door.

But the couple faced a holiday from hell when they were confronted with 43 steps to climb that had been added to the property after the images were taken.

Valerie and Bill Barrett were left furious when confronted with nearly 50 steps to access their holiday cottage in Looe, Cornwall – despite telling holiday company Sykes Bill was ‘very poorly’ from major surgery and would struggle up steps

Valerie, 78, says she struggled to make it to the top, but said Bill, 79, had to stop half way and became ill.

They then abandoned the 13-day break and spent one night at a caravan park before returning home to Curry Mallet, Somerset.

And they expressed their anger at the difference between what was advertised and the reality they found on arrival at Trezelah Cottage in Looe, Cornwall, on 19 September.

They were initially told they weren’t entitled to any money back as they never went inside, but have since been refunded after raising concerns through the press. 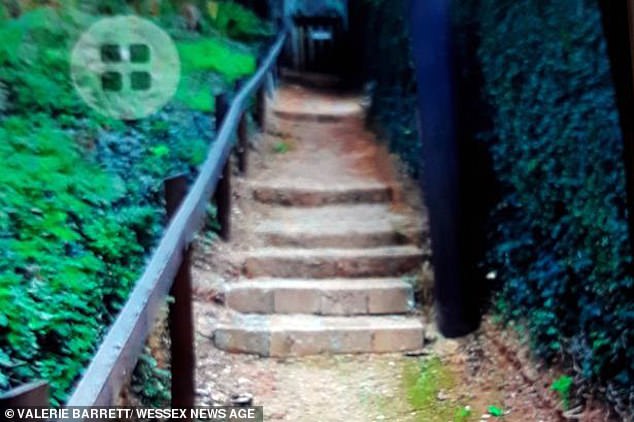 Brochure: Online pictures of the property, advertised by Sykes Holiday Cottages, appeared to show a short incline of just six steps to reach the door

Valerie, who took ‘before and after’ images of the site, said they had checked on several occasions if it was accessible for people with limited mobility and were given reassurances that it was.

She said: ‘Bill is a very poorly man and has had major surgery over the last two years. He can only walk short distances and there was no way he could climb those steps.

‘We were meant to stay for 13 nights to mark our 25th wedding anniversary and had saved up for a special trip away.

‘It cost just under £800 and we were told we were not getting a rebate as we did not go inside. We did not want to go inside. There was no way we could get up those steps. It was ridiculous.’ 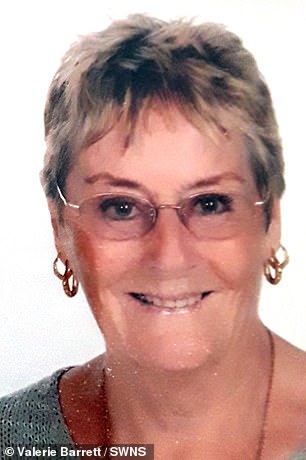 ‘But when we arrived on September 19 we astounded by the height of the steps. It was ridiculous,’ said Valerie

Valerie said they had been looking for cottages in Cornwall as Bill had never been and needed to be able to take the dogs.

She added: ‘This cottage showed up with two gates and what appeared to be just a few steps down to a bit of grass.

‘The inside looked quite nice and in the write up it said there was a few steps and a slight incline. So I thought I suppose I can manage and could help my husband who uses a mobility scooter.

‘I asked Sykes if the property was OK for an invalid and kept asking if they were sure about these steps. But they said there was not many.

‘We paid a bit in each month and were so looking forward to it.

‘But when we arrived on September 19 we astounded by the height of the steps.

‘It was really deep and had been built recently into the old steps. I just managed to get up there and was puffing by the time I had got to the top. I counted and there were 43 altogether.

‘There was no way Bill could do it.’

The couple said the owner of the cottage had even given Sykes a photo of the long flight of steps but it was never added to the company’s website listing for the property.

Valerie added: ‘I came down and took photos on the way. My husband got out and only made it halfway and had to sit down on the steps.

‘We got him back into the car and he became quite ill. One of the owners came down and made him a drink and took me to the patio where I started to ring Sykes.

‘We stayed until 5pm hoping he might turn up. We were put in touch with a caravan park and booked in for the night. But we came home the next morning as we were so despondent and the dogs were uncomfortable.

‘They have only now refunded us because of the negative publicity. We won’t re-book though. I am going to get a new washing machine and tumble dryer instead.’

‘We never go away. In 2002 we moved to Cyprus for 10 years but haven’t been away anywhere since. This was meant to be our first holiday since to celebrate our 25th anniversary but it did not happen.’

Sykes Holiday Cottages said: ‘We were sorry to hear of the Barretts’ experience and have now been in touch with them to offer them a full refund.

‘While the customers are not entitled to any refund under our usual T&Cs, we recognise that they’ve had an unpleasant experience so have refunded them in full on this occasion.’