Elderly Americans who sleep with a light on are more likely to be obese, or suffer from high blood pressure or diabetes, study finds

Sleeping with a light on can potentially increase a person’s risk of suffering multiple diet-related conditions like obesity, diabetes and high blood pressure, a new study finds.

Researchers at the Northwestern Feinberg School of Medicine in Chicago, Illinois, found that the growing amount of light sources in every day life can be not only impacting our sleep, but health as well.

Previous research from the same school has already found a link between light exposure at night and a person’s metabolism and even put them at risk of chronic disease.

Experts recommend that people make sure to turn off lights before they go to bed, especially blue colored lights which are much more stimulating to the brain.

This research also suggests that elderly Americans in general suffer more potential downsides from light exposure than their peers.

Researchers found that people who were exposed to light while they slept were significantly more likely to suffer from obesity, diabetes or high blood pressure

‘Older adults already are at higher risk for diabetes and cardiovascular disease, so we wanted to see if there was a difference in frequencies of these diseases related to light exposure at night,’ Dr Minjee Kim, a neurology professor at Northwestern and author of the study said in a statement.

Researchers, who published their findings in SLEEP, gathered data from 552 people between the ages of 63 and 84 for the study.

Each of the participants used a wrist device to track the amount of light they were being exposed to overnight.

Participants were split into two separate groups. The first had at least five hours of complete darkness each night, while the others were exposed to some light at some point during their sleeping period.

Screenings of each participants then determined if they had obesity, diabetes or hyper tension as well.

The risk of diabetes was doubled, from 9.8 percent of people with no light at night suffering from the condition – compared to 17.8 percent of the group that slept with a light present.

Obesity risk also increased 82 percent, from 26.7 percent of light off sleepers being dangerously overweight compared to 40.7 percent of those who had a light on.

‘Whether it be from one’s smartphone, leaving a TV on overnight or light pollution in a big city, we live among an abundant number of artificial sources of light that are available 24 hours of a day,’ Kim said. 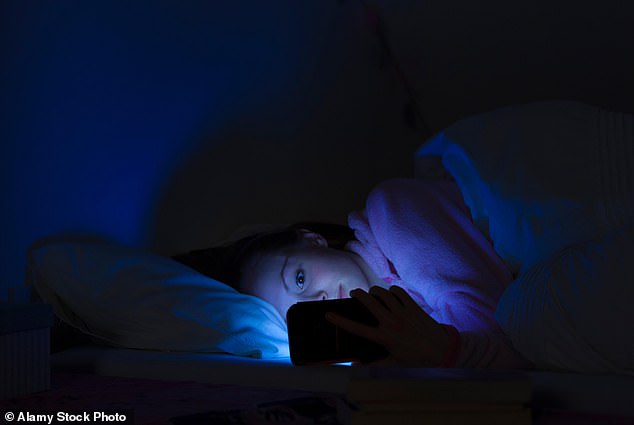 Experts warn against sleeping with a light on, and to avoid blue light at night if possible because it stimulates the brain. Light exposure during sleep has been tied to poor metabolism, which could lead to dietary issues (file photo)

While this specific study applies to the elderly, there is data supporting more light at night and metabolism issues that could increase the likelihood of developing the diseases.

Another Northwestern study from earlier this year established the link between light at night and poor metabolism in all people. It can also affect a person’s ability to process glucose.

But their is a chicken-egg factor at play, researchers say. They can not be sure the light at night itself is connected to the prevalence of health conditions – and it could even be working the other way around.

Someone who suffers from diabetes, for example, likely urinates more frequently and would want to leave a light on at night.

Still, though, researchers say it is important to do all you can to reduce the amount of light present when sleeping.

They recommend a person use blackout shades or an eye mask to avoid uncontrollable light that could be coming from outside.

If a person absolutely does need a light on for some reason, it should be as dim as possible and also colored amber or orange, instead of blue or white which can overstimulate the brain.